While many nonprofit- and privately-owned residential communities in the Tenderloin have tenant associations, the neighborhood does not have one collective body organizing for the sake of all Tenderloin residents, says Lorenzo Listana, a neighborhood resident and community organizer with the Tenderloin Neighborhood Development Corporation. And with increased development threatening to displace low-income residents, the need for one strong collective voice is great.

To bring the neighborhood's many interest groups together, Listana and TNDC intern Elyse Highstreet have been spearheading the creation of a Tenderloin Alliance, which officially launches this Saturday.

The idea of creating a neighborhood-wide alliance has been widely supported by organizations like Community Housing Partnership, the Tenderloin SRO Collaborative, Hospitality House, Faithful Fools and Boys & Girls Club, whose leaders participated in initial planning meetings this spring, Listana said. About 50 leaders from a variety of ethnic-based community groups, neighborhood interest groups and tenant associations as well as unaffiliated community leaders gathered in July to brainstorm the new organization's structure and focus. 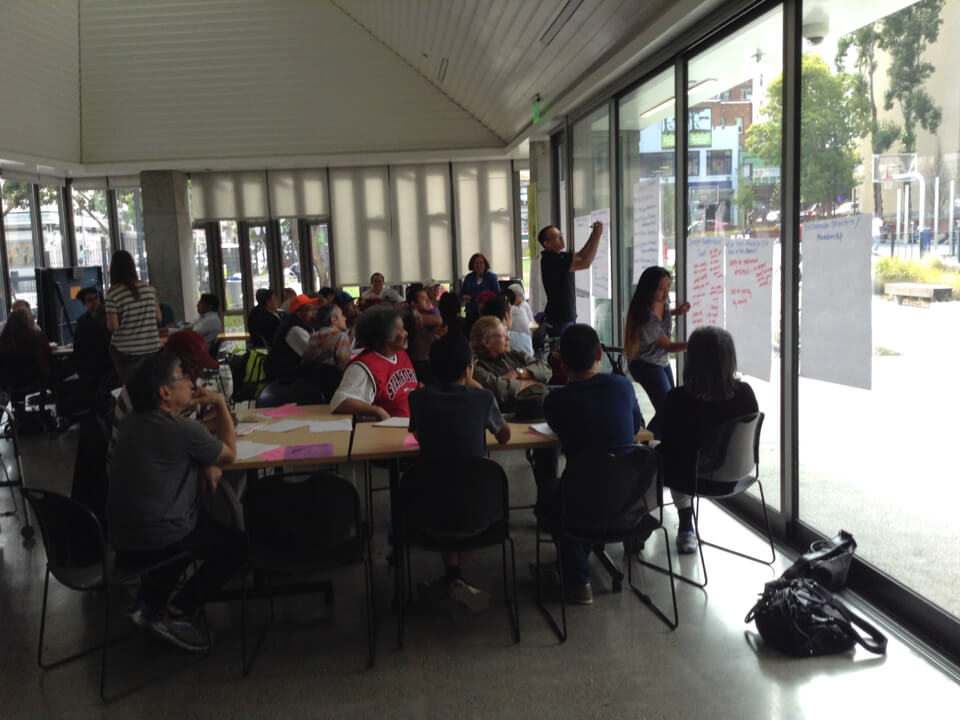 A brainstorm at July's caucus.

After much discussion of the neighborhood's many pressing issues, the group chose six focus areas for the alliance, Highstreet added. Those focuse areas will be housing, economics, politics, arts and culture, health and wellness, and safety. They also outlined a broad list of urgent actions the organization should tackle once it launches, such as developing a neighborhood-wide "Resident Bill of Rights," creating opportunities for low-income residents to turn their creativity into added income, and increasing voter turnout for the November election.

Since the caucus, an organizing committee has been meeting weekly to finalize a draft of the alliance's charter, which will be presented to and approved by attendees of the Tenderloin Alliance People's Street Congress this Saturday.

Open to all Tenderloin residents, the People's Street Congress will take place from 2-5pm on the 200 block of Jones Street between Eddy and Turk. In addition to voting on the charter, attendees will have the opportunity to vote on the organization's official name, register to stay updated on the group's next steps, learn how to apply to join the group's steering committee and meet participating organizations.

There will also be plenty of activities for children and a diverse lineup of live performances, including social-political rap, a drag performance, and spoken word by members of the Boys & Girls Keystone Club.