Plans are moving forward to develop the surface parking lot at 1532 Harrison St. into a seven-story mixed-use development that would add 136 rentals to the city's housing stock.

According to the developer's latest plans, the buildings will reflect the neighborhood's industrial aesthetics with metal-wrapped exteriors and open-air passageways, similar to those seen in many SoMa alleys, that will connect the buildings on every floor. There will also be 1,600 square feet of ground-floor retail at the corner of 12th and Harrison, across from The Eagle, along with 25-foot-wide garden laneways weaving through the property. 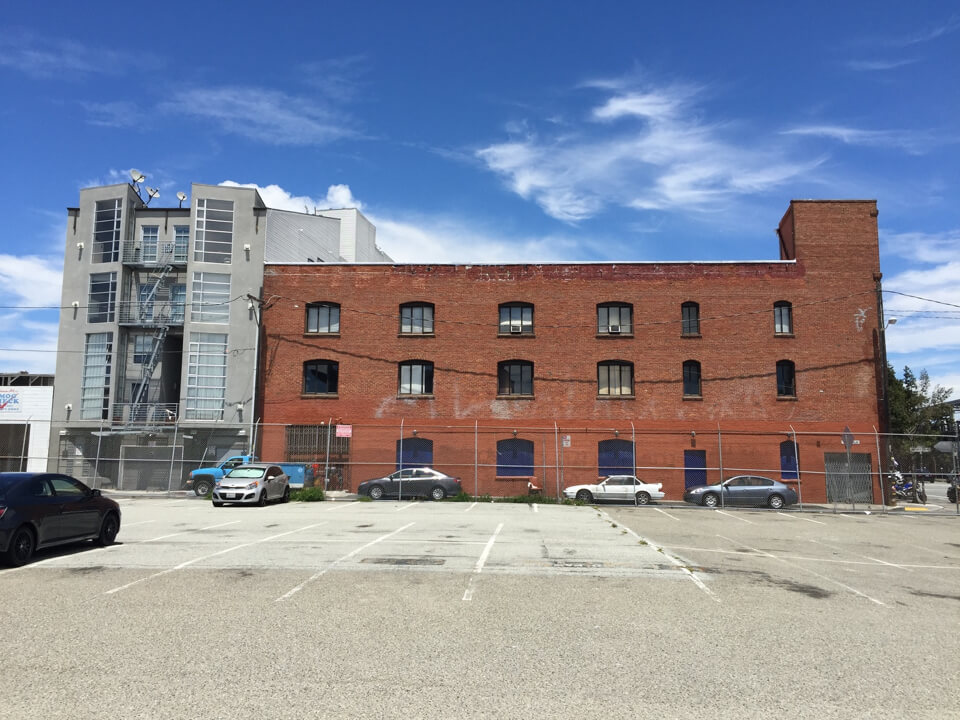 Before and after views of one of the site's future garden laneways. (Photos: Bionic) 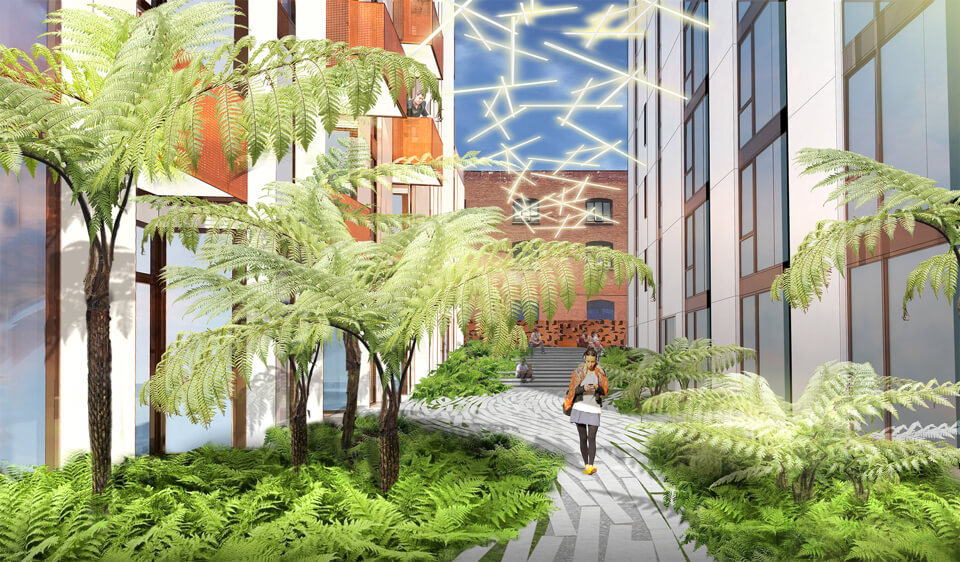 While the height limit for the parcel is 55 feet, the commission authorized Build Inc. to build up to 65 feet in exchange for a higher percentage of onsite affordable units — 16 percent in lieu of the required 12 percent. Additionally, the developer is sinking the ground floor units and garden pathways down by five feet, which Michael Yarne, principal and director of development for Build Inc., said allows the developer to squeeze in 15 more units (three of them affordable) without exceeding the 65-foot height limit. 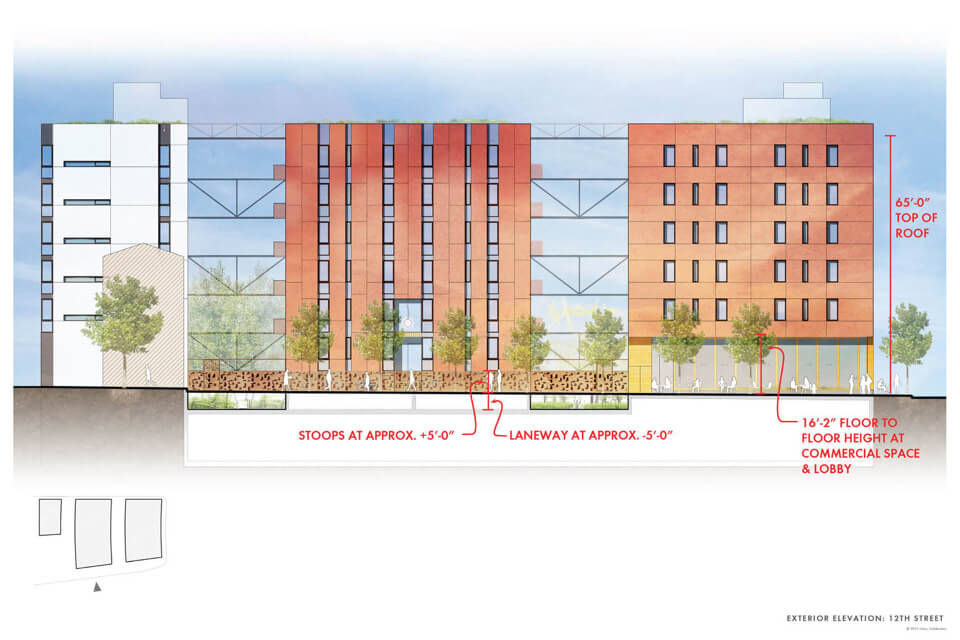 While the commissioners were pleased with the design, the hearing underscored some community members' anxiety over the Planning Department's willingness and ability to preserve height limits in SoMa and citywide.

The day before the hearing, the commission received more than 20 letters advocating for a rejection of the project due to the design of the ground-floor units. The letters asserted that the height bonus the developer would receive was not being applied according to the policy's original intent of providing spacious, ground-floor retail or PDR (production, distribution and repair) spaces with ceilings at 15 feet or taller. They also argued that by lowering the ground-floor units by five feet, the developer went against Planning's policy requiring those units to be 3-5 feet above the ground floor.

While Yarne agreed with objectors that the Eastern SoMa plan's five-foot height bonus was focused on improving the quality of ground-floor spaces, he argued that the policy was not intended to be a “prohibition" for residential design innovation. The Planning Department also confirmed that the parcel was subject to the Western SoMa Plan, meaning the 10-foot height bonus the project was eligible for was tied to the affordable housing requirement, not the retail height.

Yarne also made assurances that the ground-floor retail space would be a little over 16 feet tall, and ground-floor residential units would have stoops raised five feet above the ground floor, satisfying planning code for ground-floor units while allowing those units to have 10-foot ceilings and access to plenty of external light. 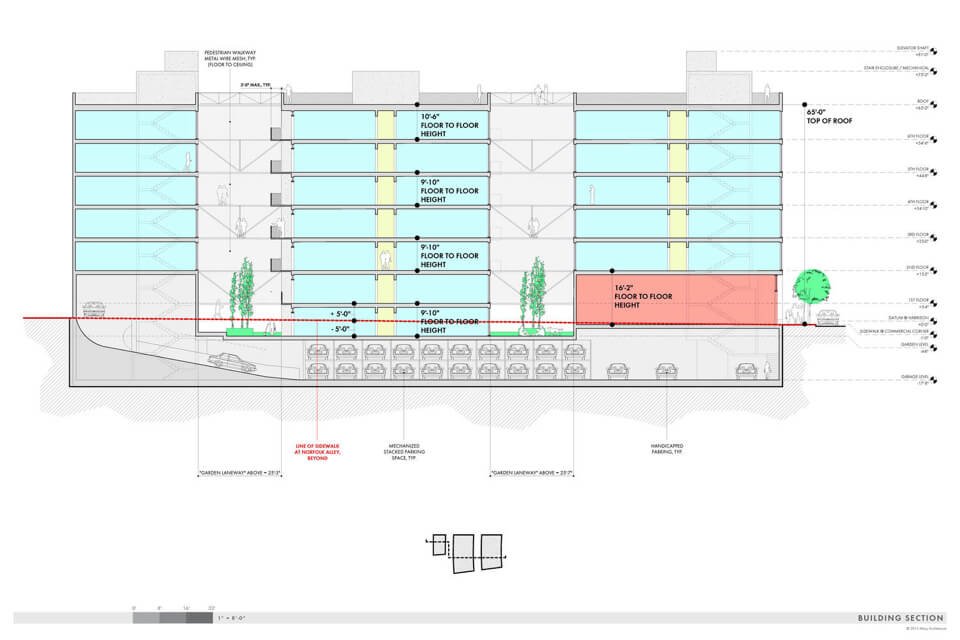 The hearing also raised concerns over developers' role in ensuring the city remains affordable, beyond earmarking units as affordable.

While Build Inc. planned to provide all residents with subsidized carshare memberships and a carshare parking spot onsite, the Planning Department recommended that the commission also impose a slew of environmental impact mitigations, including transportation benefits like free or subsidized Bay Area Bike Share memberships and Muni passes, to mitigate

While the added transportation benefits were a primary concern for Commissioner Christine Johnson — who believed that the benefits would help offset the rising cost-of-living for future tenants — a representative from the city attorney's office informed the commission that the recommended mitigation measures were not required, per the project's environmental review. If the commission did want to impose them, the Planning Department would have to present the commission with evidence that the measures would mitigate specific environmental impacts at a later date.

Uninterested in stalling the project, Johnson decided to forgo the transportation benefits and support the project, stating that the matter needed to be addressed with citywide legislation.

With the commission's unanimous approval, construction of the complex is expected to begin in the second quarter of 2016 and be completed within 18-20 months. And, with hopes of building the public open space Eagle Plaza adjacent to this community, Build Inc. will be back before the commission next month. We'll let you know if the green space secures the commission's approval as well.