Next time you stop by the Asian Art Museum or Main Public Library, take a second to remember the men and women who may still be buried beneath your feet.

Image: The Virtual Museum Of The City of San Francisco

Prior to 1850, the area featured little more than rolling sandy hills covered in brush and gnarled trees.

Over by the bay, however, the city's population was exploding in the middle of the 19th Century with the rush for gold, and early pioneers buried in makeshift cemeteries surrounding the heart of the city were blocking San Francisco's expansion.

"At the time the city was growing toward North Beach, so the territory bounded by Powell, Stockton, Lombard and Chestnut streets was ordered leveled and all the bodies in graves therein were ordered removed to the new [Yerba Buena] cemetery," the San Francisco Call reported in an 1898 article recapping the issue. 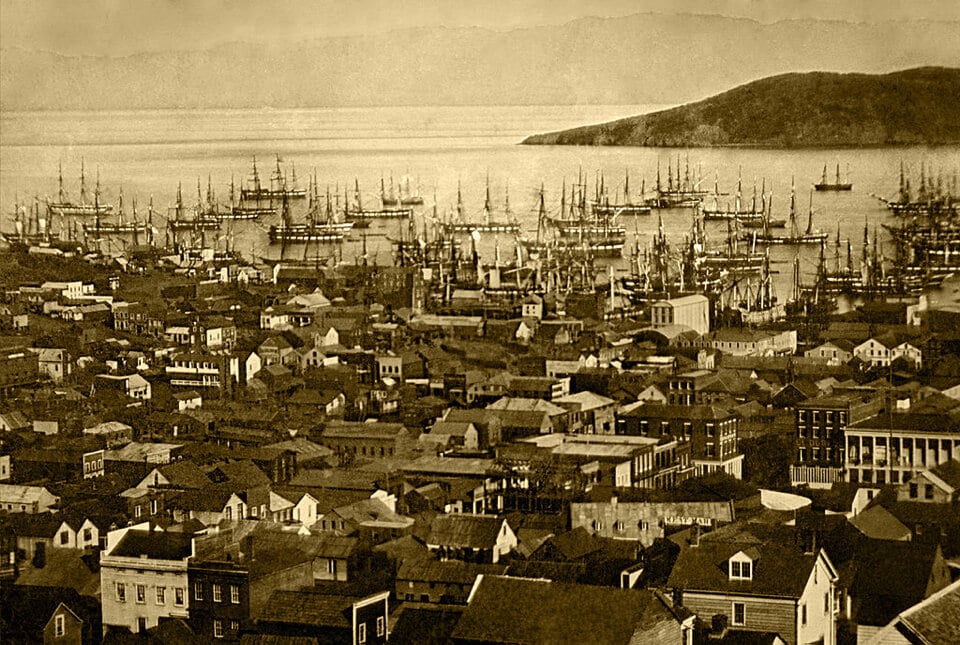 While local newspapers made it clear that the idea of disturbing the dead didn't sit well many residents, the government paid little attention to how the graves were relocated.

Upon investigating the removal of the North Beach Cemetery on Powell Street (located between Greenwich, Filbert, and Powell streets) in 1853, the Daily Alta California reported that the contractor hired to move the graves to Yerba Buena Cemetery pitched the bodies into heaps by the side of the road, shoveled them into carts, and drove them down to their new resting place. He then burned shards of decaying coffins and sold salvageable pieces as firewood.

According to the site San Francisco Cemeteries, it was learned that same year that it was common practice to steal body parts from Yerba Buena Cemetery to make soap.

"Owing to the spongy, springy nature of the soil in the burying-ground of San Francisco, many of the corpses there interred, instead of decaying, have been converted into a substance well known to chemists by the name of adipocere - a substance analogous to, and intermediate between, stearine and spermaceti [wax-like substances]," reported a journalist with the Chambers' Edinburg Journal. "In passing the ground this morning to my place of employment, I saw a person busily engaged in collecting the adipocere from exposed bodies. Struck by the singularity of his employment, I interrogated him as to its object, when he cooly replied, that he was gathering it to make soap!"

By 1854, Lone Mountain Cemetery was formed and became the city's primary burial ground. While new burials were prohibited in Yerba Buena Cemetery, the bodies remained in place until 1871, when legislation to abolish the cemetery and construct a new City Hall on the property was upheld by the California Supreme Court.

Once again, bodies had to be removed — this time to Golden Gate Cemetery in the Outer Richmond — and once again, the job was done hastily.

"Many bones were found while the ground was being broken for the site of the new City Hall. Now its massive foundations stand as tombstones over the bits of skeletons that were left in the early [eighteen] seventies," the San Francisco Call reported on Sept. 25, 1898 in an article rehashing the former cemetery's history.

"By Tuesday night the workmen had uncovered the remains of sixteen bodies and these were placed in a little box and left for the Coroner," the article goes on to say. "No one was sent form the Coroner's office on Tuesday night, however, and when the workmen went to work yesterday morning all the skulls in the collection had been stolen. It is presumed that they were taken by medical students, or ghouls." 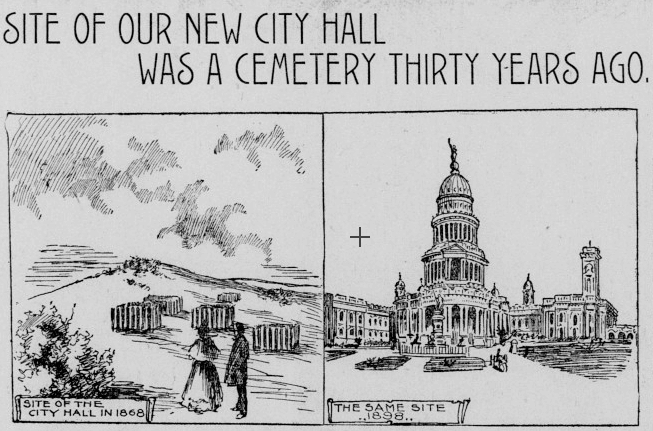 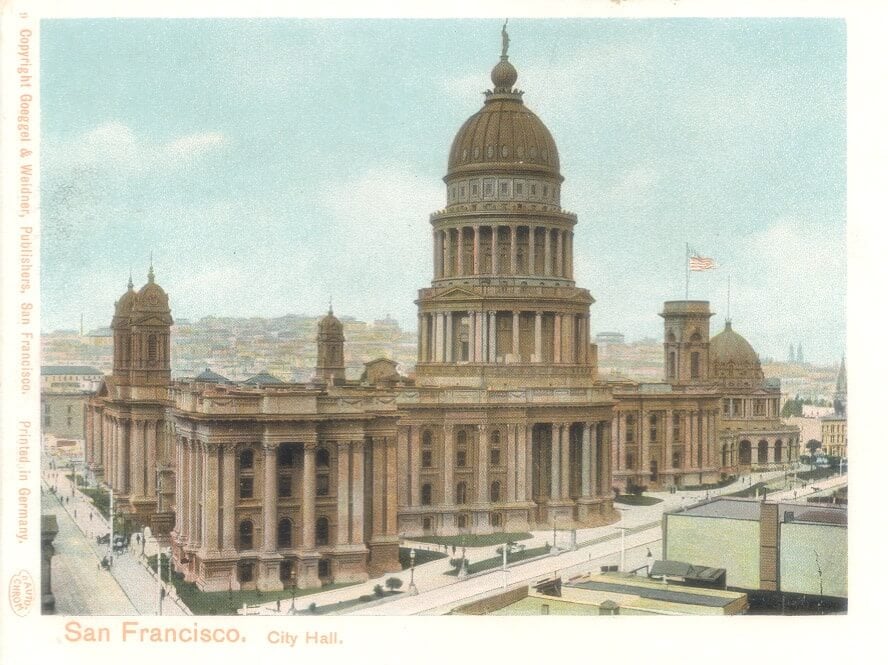 But it only lasted the city for seven years. As with many San Francisco buildings at the time, the structure was destroyed in the 1906 earthquake and fire. 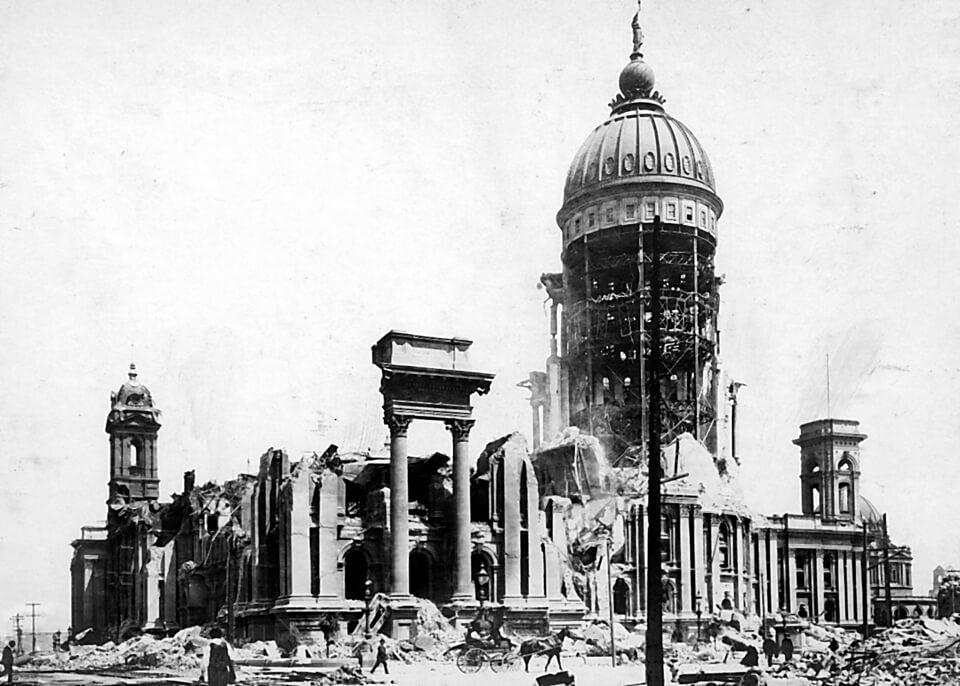 As the city rebuilt in the following years, a public library was constructed on the site at 200 Larkin St., and Yerba Buena Cemetery was largely forgotten — until work began in 2001 to renovate the building for the Asian Art Museum to take over.

While digging below the foundation originally created for the original city hall, the excavator found fragments of coffins and fully-preserved skeletons. The Chronicle reported that the remains of one individual, who could only be identified as a 19-year-old man, still wore a vest with a coin in the pocket.

Three years later, the city found a final final resting place in Colma for all 97 men, women and children uncovered during the dig, and Yerba Buena Cemetery drifted back into obscurity.

While we can't confirm that all of the bodies have been removed from the site, Robert Spoor, who leads the annual Ghost Walk at City Hall, tells us that he hasn't heard a single ghost story that can be traced back to Yerba Buena Cemetery. A relief to many neighbors, we're sure.