The Story Behind The Castro's Goriest Halloween Window Display

When Scott Liapis and husband Darren Gero relocated from New York to San Francisco in 2010 and found an apartment in the Castro, they knew right away that it was home. They moved into the 17th Street & Douglass apartment on Halloween, and Liapis took no time to relax: he quickly unpacked costumes and started handing out candy to people walking by and scaring them from the window.

Over the past five years, Halloween celebrations at their apartment has evolved to include a full-blown window display that takes Liapis almost a year to create from scratch. 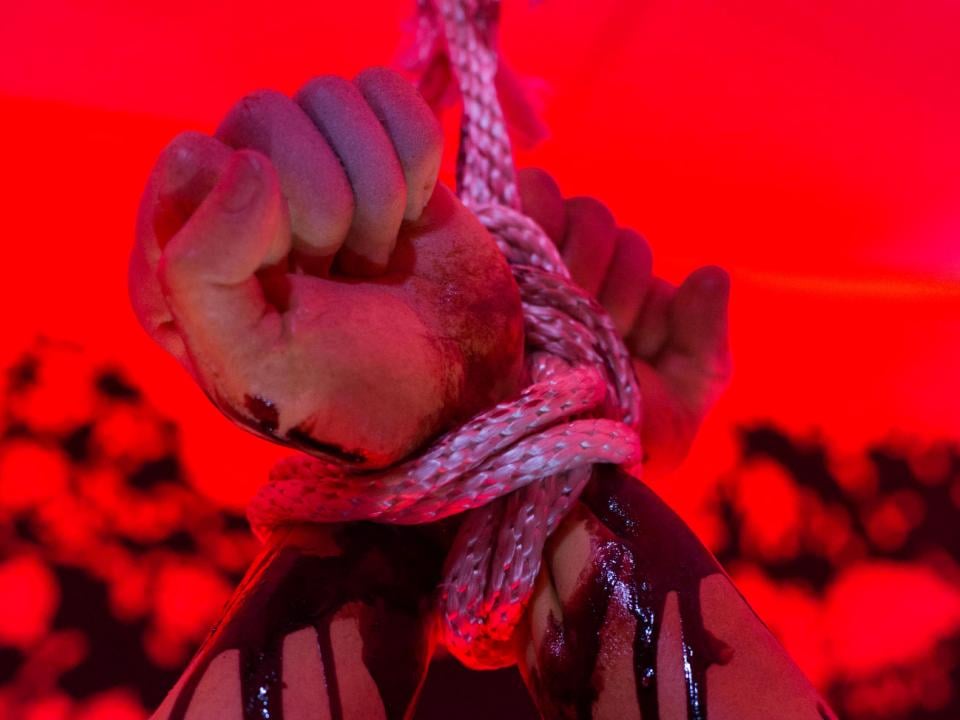 Liapis begins working on the display every January. “I start gathering items, and sometimes send a lot of stuff back to vendors because I want it to have an element of realism," he said. "I don't like putting phony-looking things up.”

To create the displays, Liapis uses a variety of elements to pull everything together. The backdrop, for example, is designed from plastic and decals, and is back-lit with red light for dimension. A butcher in Alabama made hooks, which Liapis used last year when he did a butcher theme with the hashtag “blessed.” "You've got to add a little humor to these things," he said. 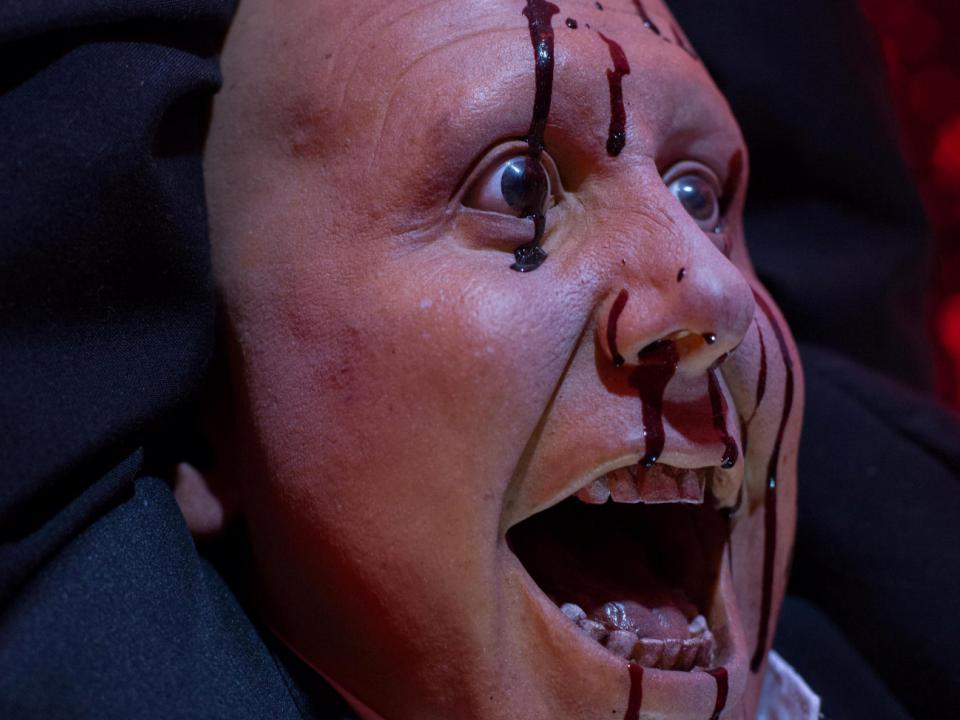 Each year has a specific theme to it, and this year, Liapis drew inspiration from a significant life event for this year's theme, "Til Death Do Us Part." Liapis and Gero had been together since 2008, and married in late June of 2015, right when the Supreme Court legalized gay marriage nationwide. “I wanted to do the marriage theme for about two years, but I wanted to wait until we actually got married.”

Props for the marriage theme include a 20-lb wedding dress. "We have some other consignment clothes, including an actual flower girl dress," Liapis said. 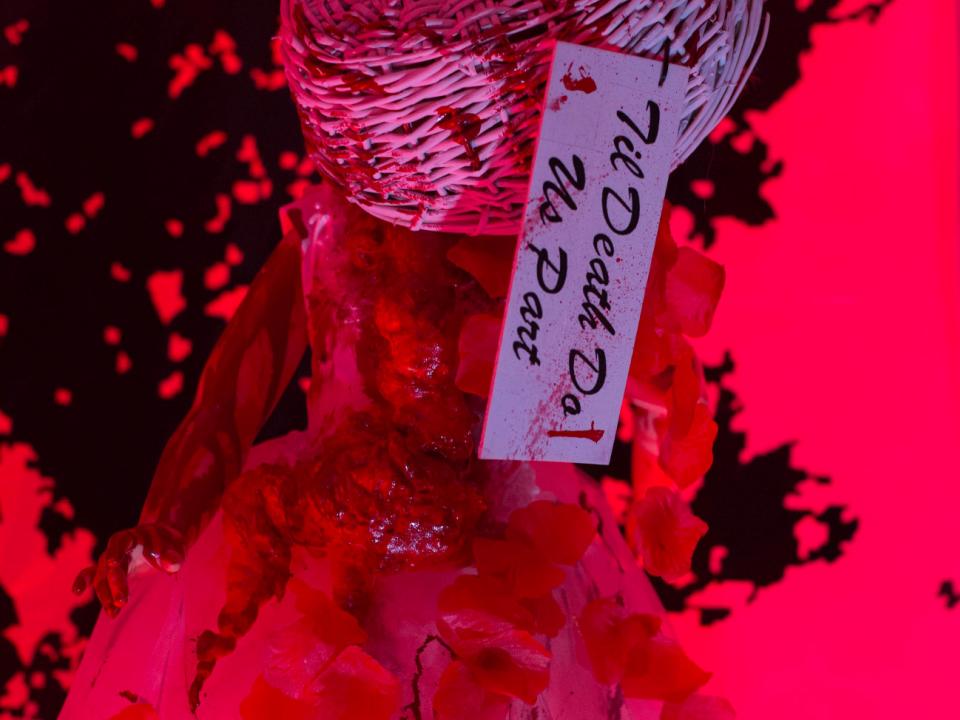 He doesn't hold back on the scare/shock factor. "I like to keep it as gory as possible," he confided. One of his most memorable displays was a little girl's princess birthday party with a twist. "Raggedy Ann came out and slaughtered everyone,” he laughed. “I'm always nervous that I'm going to get a call from the police or an angry parent, but honestly,” he said, as an admirer stopped to snap a photo, “it's like this every night. People stop by and say such nice things!”

Another passerby familiar with the display stopped by and asked Liapis, "Did you do more work to it?" Liapis replied, "Yeah, I moved some lights around and fixed her head—it was starting to come off." He looked us and said, "I came out one day and the woman’s whole body was against the wall. It’s like she was saying, ‘Get me out of the thing!'" 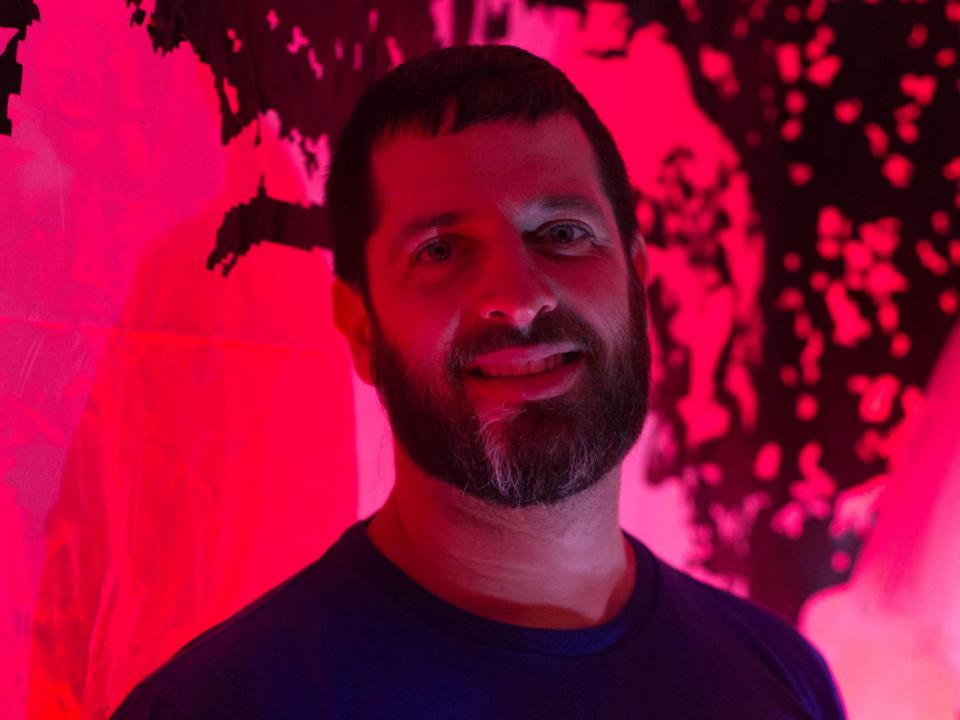 Originally an aspiring painter in New York City, Liapis now spends times writing screenplays and walking dogs when not working on the window. "When Gero initially suggested moving to San Francisco in 2010, I was at first adamantly against it, but now I can't imagine leaving," he told us. "There were times we thought about moving to L.A. or someplace else, but now we know when we leave we will never be able to come back. Our apartment is rent stabilized, so getting a new one would cost about triple today. Also, when am ever I going to have a perfect window with the street right here!”

Liapis urges pedestrians to come by on Halloween for an extra treat. "This window comes to life on Halloween night," he said. "The neighbors get involved and we have the garage open—it’s pitch-black in there. I bloody everyone up and give them fake chainsaws to scare everyone as they look up at the display.” Liapis always dresses up as the main characters in his display. “This year, I'll be wearing the wedding dress in the window.” 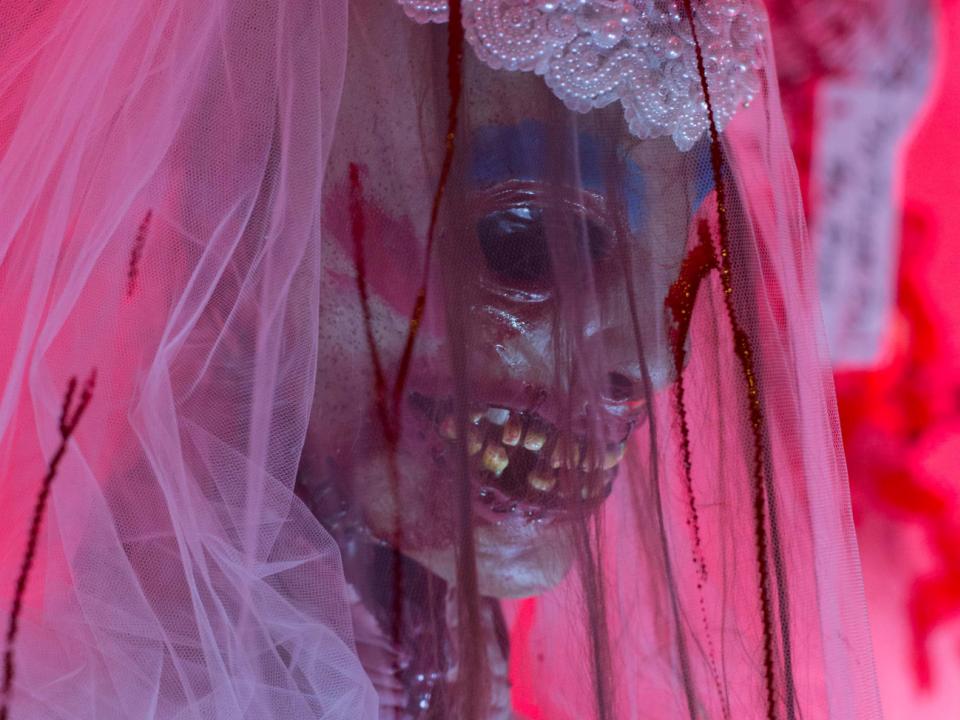 Check out Liapis' display at 4170 17th St., and swing by on Saturday night for the full effect.