This asian pear grows on a successful graft at an undisclosed location in the city. (Photo by David W. Crane)
By Jennifer Glenfield - Published on December 12, 2015.
San FranciscoHayes ValleyMission

The ornamental cherry, plum and pear trees lining the streets of San Francisco produce beautiful flowers. The blossoms span a spectrum of bright white, soft pink and violet-red. Their leaves change with the seasons and theirs branches provide shade over sidewalks. But the trees aren’t there to bear fruit that you’d enjoy eating.

An urban agriculture project has spent the last five years trying to change that. A group known as the Guerrilla Grafters are grafting branches from fruit-bearing trees onto city-owned ornamental ones.

One in four people in San Francisco face the the threat of hunger or poor nutrition, according to the SF-Marin Food Bank. The scofflaw project is intended to let anyone who’s hungry pick free fruit in the public domain.

And a lot more. For members of the Guerrilla Grafters, the project is also about promoting public spaces, ecological diversity, and getting the public engaged with the environment.

For one member, the project was inspired in part by the Hayes Valley Farm, which temporarily transformed parcels from the old Central Freeway spur into an urban permaculture garden before eventually getting developed into housing.

Every year around this time, the band of artists, gardeners and technologists from around the city prep for the upcoming grafting season in late winter and early spring.

This season, the preparation incorporates elements not typically associated with gardening: RFID chips and Arduinos.

RFID chips store information that can be scanned and retrieved. Arduinos are simple programmable microcontrollers that are popular in the DIY community.

The RFID chips can store data about the trees such as water consumption, the species or its growth rate. The group is still deciding what to store in the chips, but the aim is to collect information that could contribute to microclimate or climate change research. 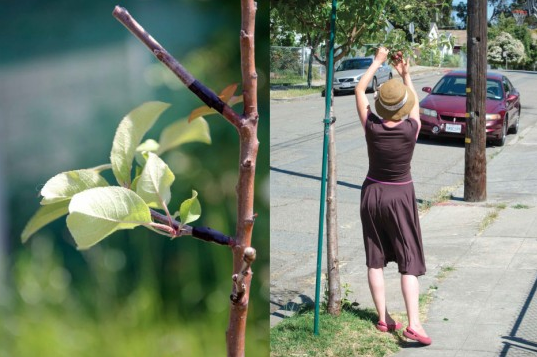 The grafters started integrating technology into their efforts last winter when they worked with Falling Fruit, another fruit-based art activist group, to map trees that could be grafted around the world. The map, released during the summer, allows users to submit data and is precise enough to zero in on a particular street in a neighborhood.

“My research and work has largely been in participatory systems so it seemed pretty natural,” said Margaretha Haughwout, an instructor of new media arts at California College of the Arts who cofounded the project.

A former Hayes Valley resident now living in the Mission, she led biodiversity efforts on the former neighborhood's temporary farm through running the greenhouse. She also established a unique governance structure at the farm and served on its board.

“The Hayes Valley Farm project influenced my involvement with the Guerrilla Grafters. It was also really engaged with this idea of commons,” she told us. “It’s not so much about us harvesting. We really try to grow relationships in the hyper-local neighborhood.” 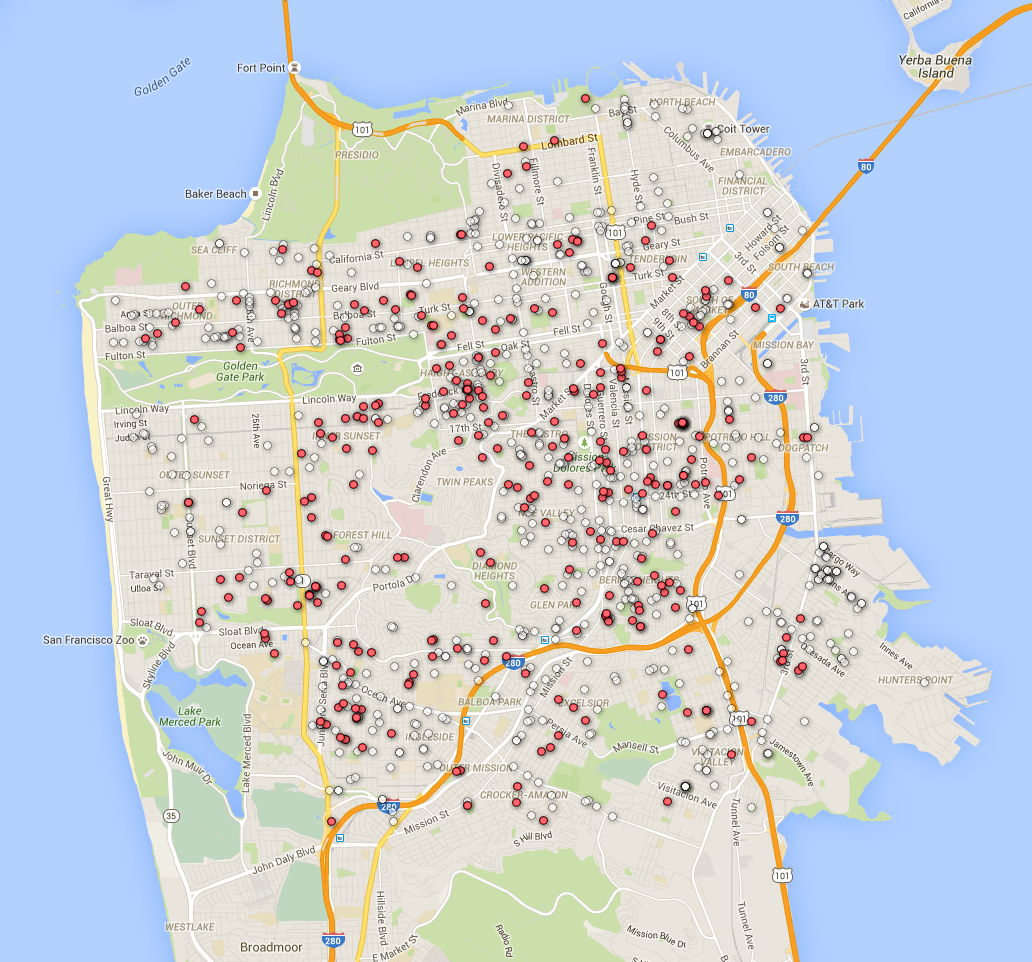 A crowdsourced map of publicly accessible free fruit trees in San Francisco by Falling Fruit. Not to be confused with the unmapped locations of Guerrilla Grafters trees.

But the grafters have not incurred any penalties so far. According to city officials we spoke with, this was due in part to lack of funding to maintain the trees anyway.

During the last few years, the city has cut its budget for street trees, and has shifted 70 percent of the maintenance responsibility for them to adjacent property owners.

Like the Hayes Valley Farm, the project has drawn attention beyond San Francisco — places like New York, Australia and even Pakistan where people are looking for more ways to grow their own food.

“I think we envisage an environment that is more giving, more presenting to people,” explained Ian Pollock, another founder of the Guerrilla Grafters. “And I think that most people resonate with that.”

Check out the above video for more details from Haughwout and Pollock about grafting and how they’re using tech this year.

Hoodline
About 24 hours ago