A new mural is taking shape in front of Laguna Honda Hospital, just ahead of the hospital’s 150th anniversary.

Mural arts nonprofit Precita Eyes is transforming the 200-foot-long retaining wall at the hospital’s front entrance into a procession of images from the neighborhood through time. Painting began in November, and though the finishing touches should be done in time for the new year, Precita Eyes may extend the mural if they secure additional funding.

The project is the latest from the community arts organization, and is its first in the Forest Hill neighborhood. Headquartered on 24th Street in the Mission, Precita Eyes has spread mural art to urban areas throughout the Bay Area and internationally since its founding in 1977, with a particular focus on the Mission District. 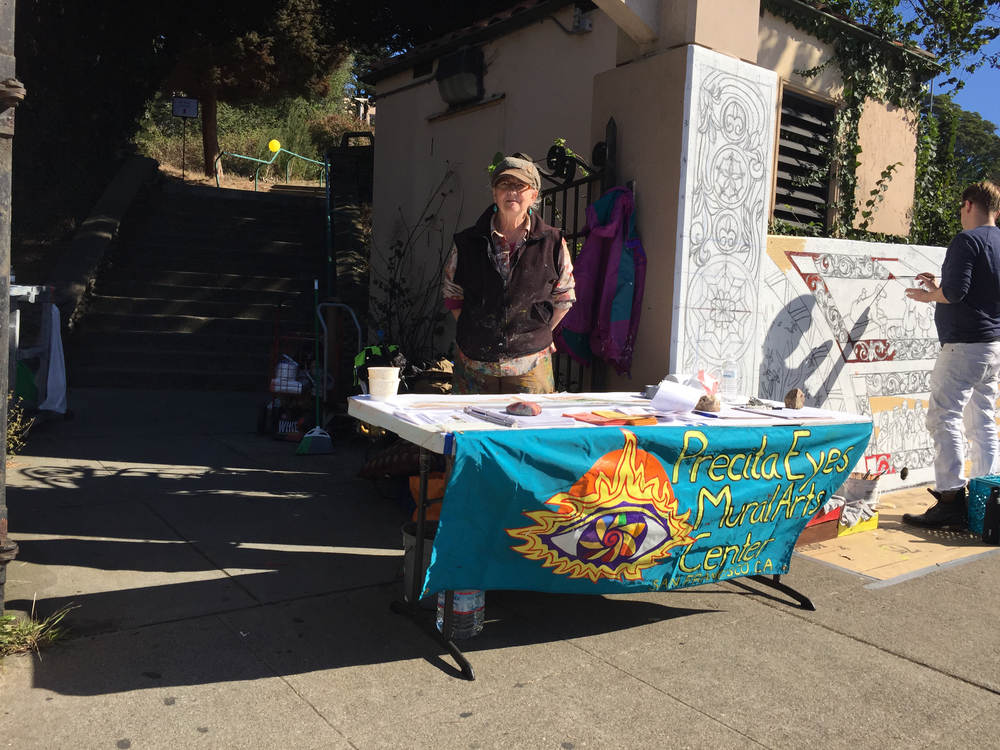 The organization works collaboratively with communities to create art that’s relevant and accessible to the people they serve. “We intend to bring art into the daily lives of people through a process which enables them to reflect their particular concerns, joys and triumphs,” says a mission statement on the organization's website.

A few years ago, Laguna Honda approached Precita Eyes about painting a mural on the walls flanking its front entrance. The hospital and rehabilitation center marks its 150th anniversary in 2016, and wanted to showcase the facility's history of serving the community.

Previously, the wall had been painted solid green, making it a target for vandalism and graffiti. Laguna Honda wanted to “make it more welcoming for [people entering] the hospital, but also for the commuters and people who drive by,” said Elaine Chu, who co-directed the mural with Yukako Ezoe.

Chu and Ezoe worked closely with hospital staff and residents and the Midtown Terrace and Forest Hill neighborhood associations to come up with the design. This included workshops where hospital residents and neighbors met with muralists to brainstorm and sketch ideas. In November, organizers held a community paint day where over 100 neighbors, from young children to older adults, showed up to put their mark on the mural. 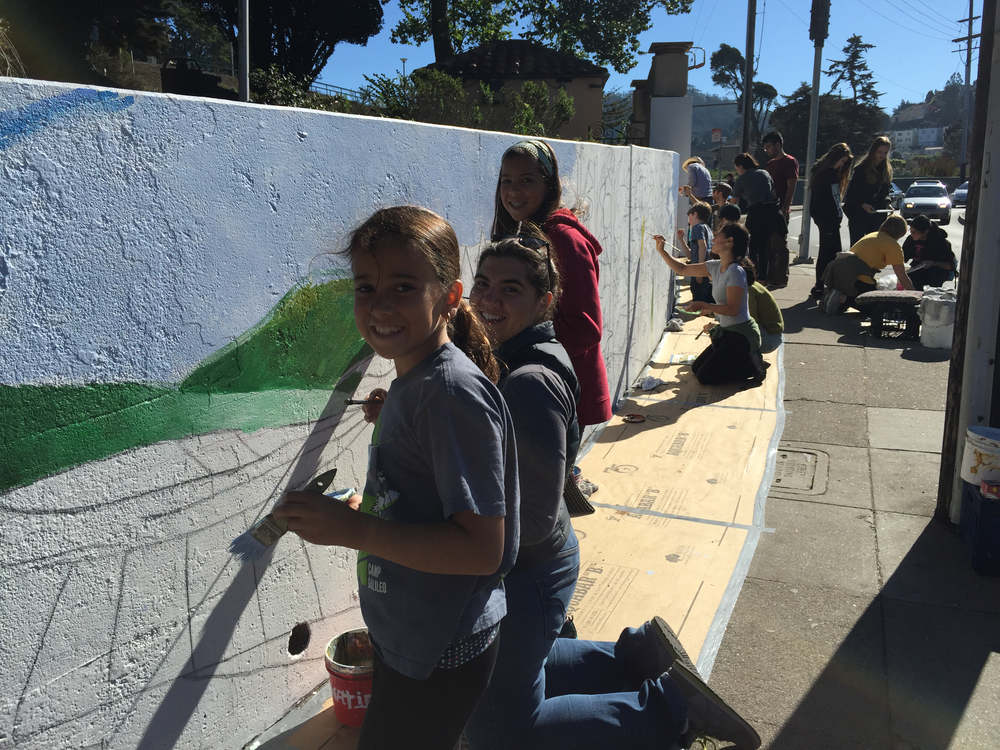 The design they settled on combines images of the neighborhood before it was developed through the present day, as well as elements from the hospital itself.

The mural centers on an archway leading to the hospital’s entrance, which contains decorative patterns from inside the building. Its left wall depicts the area's past, including trees and sand dunes that used to occupy the site, the San Miguel Rancho where the hospital, originally an almshouse, was built, and past nurses and doctors.

An old train disappears into the Twin Peaks Muni tunnel, which opened the city’s west side to development, and exits as a modern train on the mural’s right side. Present-day staff, landscapes, and buildings are depicted on the right wall, including rows of Mission Terrace homes, the Forest Hill clubhouse, and Sutro Tower.

To recreate scenes from earlier in the area’s history, Chu and Ezoe used old photographs from inside the hospital. They also incorporated "the beautiful architecture and beautiful patterns we found in the hospital itself, so that’s where the decorative elements came from," said Chu. 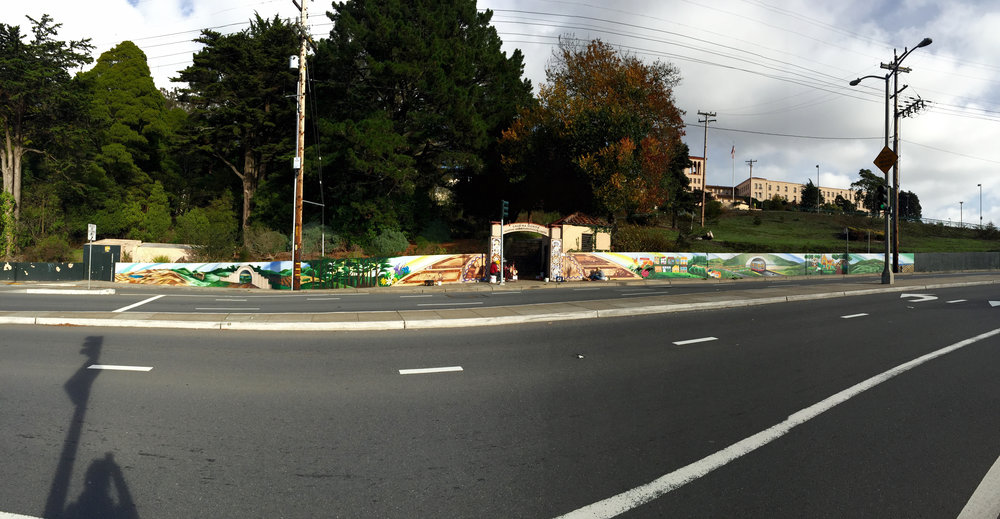 The mural occupies an area heavily trafficked by commuters, with the Forest Hill Muni station across the street and bus shelters serving four routes nearby. Chu said they’ve received several requests from pedestrians who wait at adjacent bus stops to extend the mural another 150 feet, and are considering launching a fundraising effort to meet those requests. If they succeed, another round of neighborhood meetings and another community paint day will be on the horizon.

“We’re hoping we can extend the mural and beautify that little area where the commuters stand," said Chu. "[A lot of] people drive by to go to the Inner Sunset, so we get a lot of honking and people that are pretty excited about it.” 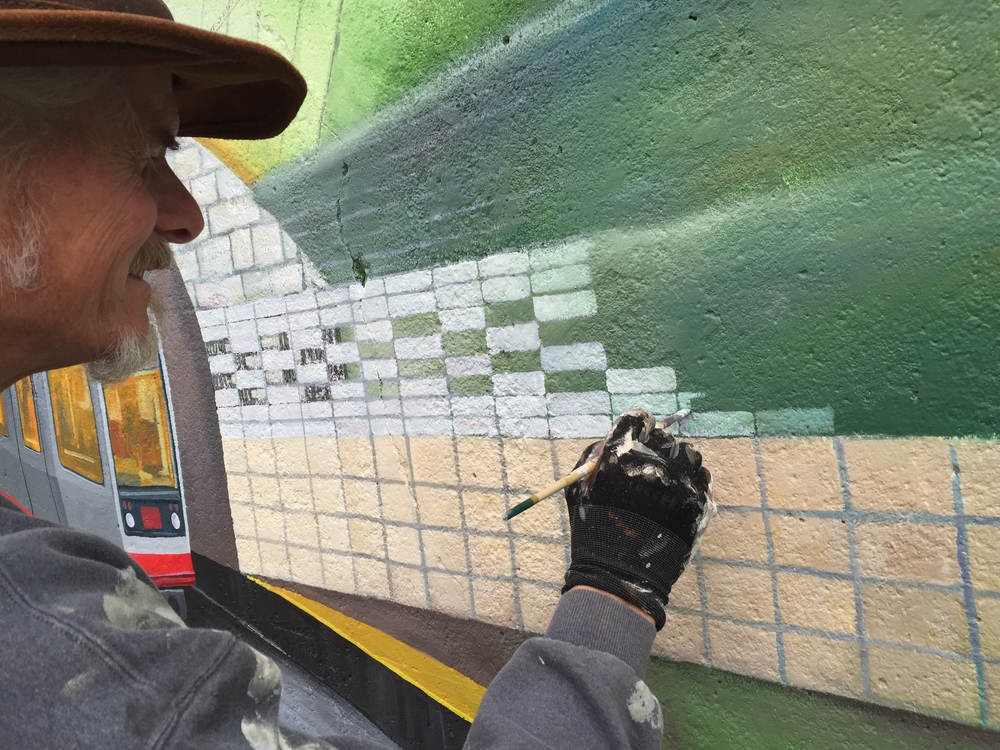 Thanks to tipster Jeremy Friedlander for letting us know about the project.