Tishman Speyer's proposal to construct a 391-unit mixed-use residential complex with a 400-foot tower at 160 Folsom St. passed its first test toward approval yesterday. The decision came after a lengthy discussion of the proposal's projected benefits for middle-class residents being squeezed out by the city's rising rents versus the impact it would have on the homeowners in surrounding high-rises.

160 Folsom, at the corner of Folsom and Spear, is located within the under-development Transbay Neighborhood. A portion of the block is owned by the Office of Community Investment and Infrastructure, which took over the major redevelopment project after the San Francisco Redevelopment Agency was dissolved by the state. In November 2014, the Commission on Community Investment and Infrastructure approved an "exclusive negotiations agreement" with Tishman Speyer, which offered plans to purchase the public land and construct a 318-unit complex featuring a 300-foot tower or a 391-unit complex starring a 400-foot tower  — if the city approved a 100-foot increase on the property's height increase.

Heading into the commission's public hearing on the height increase, the project team was well-aware that many Rincon Hill residents would be prepared to voice their opposition, citing increased shadowing of Rincon Park, which is not protected by the Sunshine Sunlight Ordinance, as their main concern. 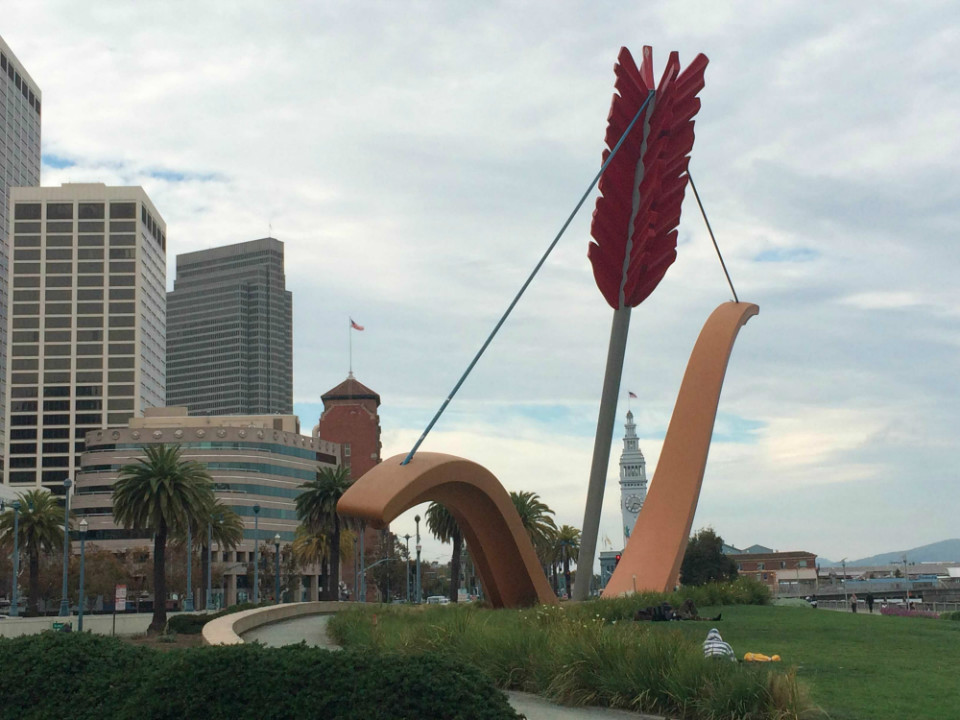 OCII project managerJose Campos presented the commission with a series of renderings of the impact the 300- and 400-foot alternatives, with the full pipeline of approved and proposed towers, would have on the waterfront skyline and nearby public open spaces. Neither option would significantly impact the city's skyline, he said, and at either height, the tower would be most noticeable if you happened to be on a boat directly across from the site on the bay, on the Bay Bridge or Yerba Buena Island. 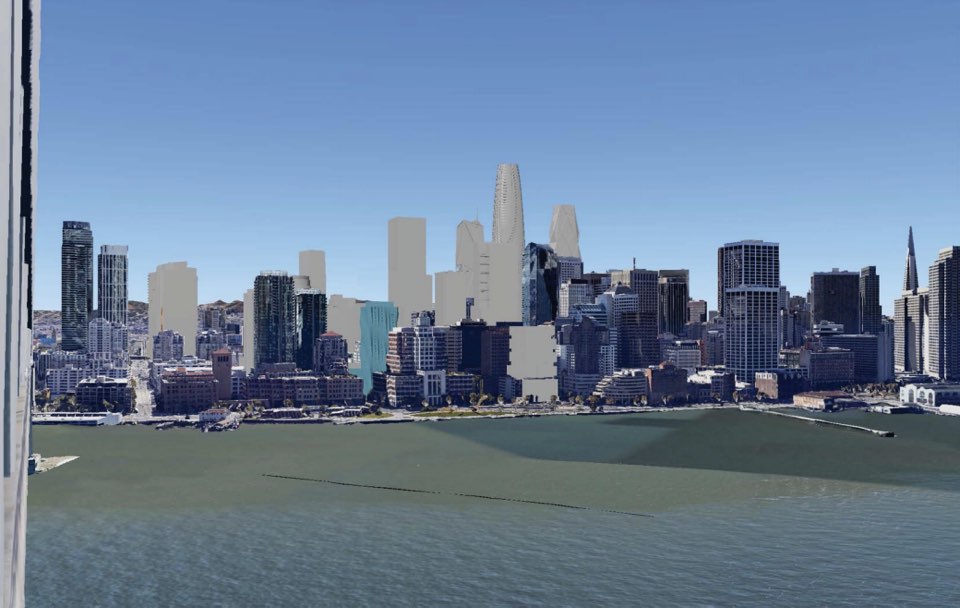 How the 300-foot tower at 160 Folsom, surrounded by the area's full development pipeline, will appear from the Bay Bridge. (Rendering: OCII Memorandum) 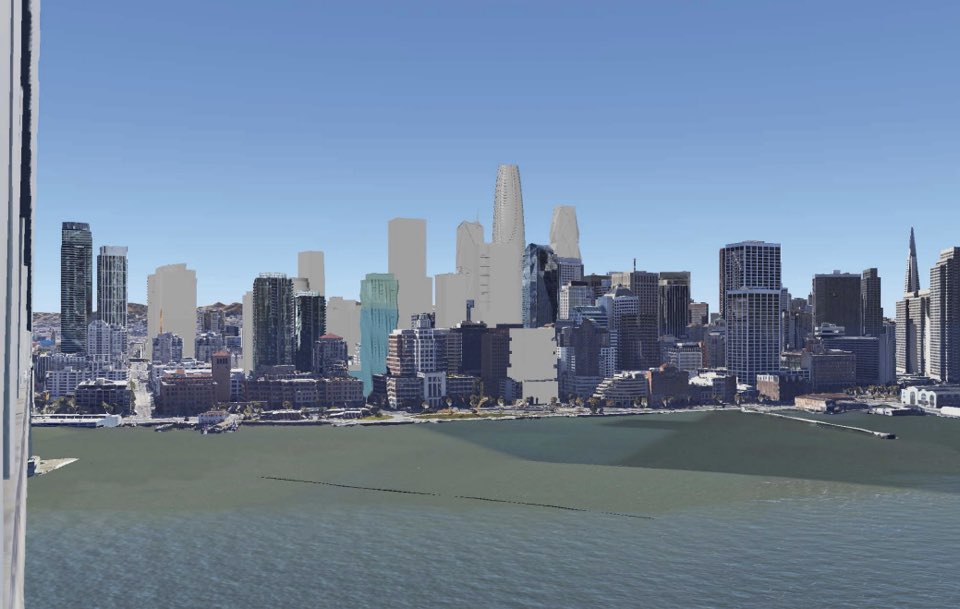 How the alternative 400-foot tower at 160 Folsom will appear from the Bay Bridge. (Rendering: OCII Memorandum)

As for shadowing nearby public spaces, Campos explained that it would cast new shadows on six nearby open spaces: Rincon Park on the Embarcadero, the future Transbay Park planned for Main and Folsom, Spear Street Terrace at Spear and Howard, the Howard/Fremont Plaza and the future Transbay Terminal Park planned for the roof of the future metro center. However, the 400-foot tower's impact on these spaces would be negligible, he said. At the maximum, it would decrease "theoretically available annual sunlight" on Spear Street Terrace by up to .49 percent.

What resonated with the commission most, however, was the modified affordable housing package offered with the 400-foot proposal.

Originally, the developer agreed to purchase the land for $19.2 million, and OCII would pay $20.9 million to subsidize the 76 affordable units in the eight-story residential building onsite. With the new agreement finalized last week, Tishman Speyer agreed to make 40 percent of the condos affordable to moderate income residents (earning 80-100 percent of the area median income), rather than the 35 percent required on this site, if the city agreed to a 400-foot tower. Tishman Speyer would also foot the bill for those 44 extra affordable units, saving the department $1.7 million (the cost of constructing those units would constitute the sale price of the land).

Furthermore, the developer agreed to distribute those additional units in the eight-story residential building and the first 26 floors of the tower, rather than putting all of the affordable units on the bottom three floors of the complex. Tishman Speyer would also subsidize home owner association dues for BMR residents at 80 percent AMI — covering anything over $850 per month for those residents.

During public comment, not all were pleased with the 5 percent bump in affordable units and disagreed with the project team's assessment of the shadow impact. A handful of nearby property owners, primarily residing in towers at The Infinity, urged the commission to consider whether 5 percent more affordable housing was worth less desirable open space, more traffic in the already gridlocked neighborhood and decreased quality of life for existing residents.

"Everybody needs affordable housing in San Francisco, that’s for sure. But only a handful will benefit from this," said one Infinity Tower resident, who noted that he did not expect to be looking into a 400-foot tower when he purchased his home on the 46th floor. "Is it really worth impacting everyone’s quality of life for a handful of affordable units?”

Countering claims that a 5 percent increase is unsubstantial, two future homeowners at the 100 percent affordable condo complex at 1400 Mission St. voiced their support of the project. One of those homebuyers, a project engineer working on the Transbay Terminal, argued that 44 more affordable homes in San Francisco were obviously more important than shadows. "It's for people like me," she said of the project. "I make a difference. I’m building the city, I’m making this city."

With three native San Franciscans on the board — who shared personal experiences about friends and family members being pushed out of the city due to the current housing crisis ahead of the vote — the commission unanimously approved the proposed height increase.

Before pledging his support, Commissioner Miguel Bustos said of the opposition voiced, "What I hear is, 'I don’t want this to cover my view.'" The commissioner went on to say that he was offended by claims that 5 percent more affordable homes wouldn't make a difference and hoped projects like this one could help people who made San Francisco an attractive place to live return.

With the first set of approvals locked down, the height increase is expected to be reviewed by the Planning Commission in March, before the project moves on to the Board of Supervisors later this spring.