Back in August we found out about a proposed parklet for Réveille Coffee in the Castro. Despite a number of objections, it's starting to become a reality now.

After a Department of Public Works hearing on September 23rd, and another meeting on the 15th of last month, the DPW has now approved the project to move on to the design phase of the city parklet program. 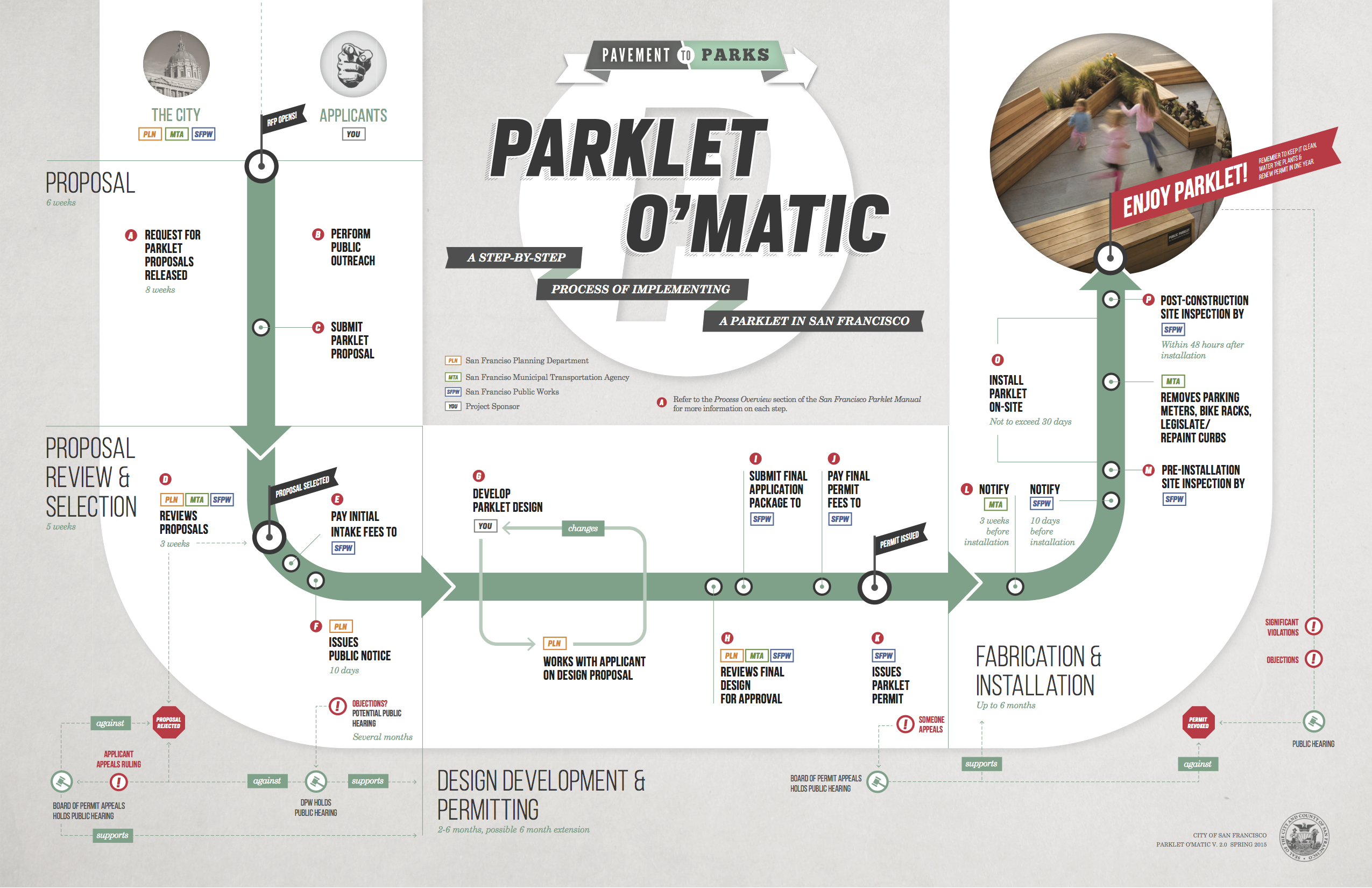 Prior to the hearing, DPW received six objections to the project during the notification period (July 27 to August 5, 2015). The primary concern was regarding the loss of parking. Other objections including stating that the sidewalk was in bad condition, that it would increase congestion, that the homeless population would increase and that there was generally a lack of communication and outreach about the project.

There were also two comments received in support of the project during the notification period. One of the comment stated that the parklet would be a good addition to the neighborhood and the other mentioned that it would add vibrancy and activation to the location. Along with the comments, the Castro Merchants Association also sent in a letter in support of the parklet.

The hearing on September 23rd was conducted in order to discuss the merits of the the proposed parklet. DPW emphasized the importance of noting that the parklet is not an extension of Reveille Coffee instead its a space open to the general public.

Owners of Réveille Coffee spoke about the proposed project and stated that the parklet would be a positive addition to the community, as well as an asset to the surrounding businesses and an overall benefit to the neighborhood.

During the public comment phase of the hearing one person testified in objection to the project. The commenter concerns were over the loss of parking leading to the all-too-common occurrence in the neighborhood of double-parking. A member of the Castro Merchants Association was also in attendance to speak in support of the project being a good addition to the neighborhood and that it will help the local businesses and community. After the hearing, DPW considered and reviewed all associated files on the proposed parklet and testimony of parties supporting and opposed to the parklet. Based on this information, the Hearing Officer made the decision to recommend the proposed parklet for approval to move forward with design. The Hearing Officer recommended the project for approval with following six findings:

FINDING 1. The sidewalk width is not being reduced by the parklet, thus not affecting existing path of travel width and congestion.

FINDING 2. The parklet must meet accessibility requirements, and sidewalk will be required to be repaired as necessary for proper accessibility per the ADA Code.

FINDING 3. The parklet would provide an open space element and open seating for the general public.

FINDING 4. The parklet review team comprised of the Planning Department, MTA, and Public Works has determined that the parklet is an appropriate use of the public right of way.

FINDING 5. The applicant received the property owner’s consent, five (5) letters of support from neighbors, and a petition of support with one hundred and twenty-eight (128) signatures, thus showing proof of outreach.

FINDING 6. The proposed parklet satisfies the City's location and design standards for its intended use.

In terms of the final design, DPW spokesperson Mindy Linetzky told us that now that the project is in the design phase it typically will take a few months to produce designs which will then be reviewed by Planning, SFMTA and Public Works.

Réveille Coffee has previous experience when it comes going through the process of implementing a parklet. In the summer of 2014 they debut a parklet at their North Beach location. Expect to see something similar in quality and design from this at their Castro location as well. 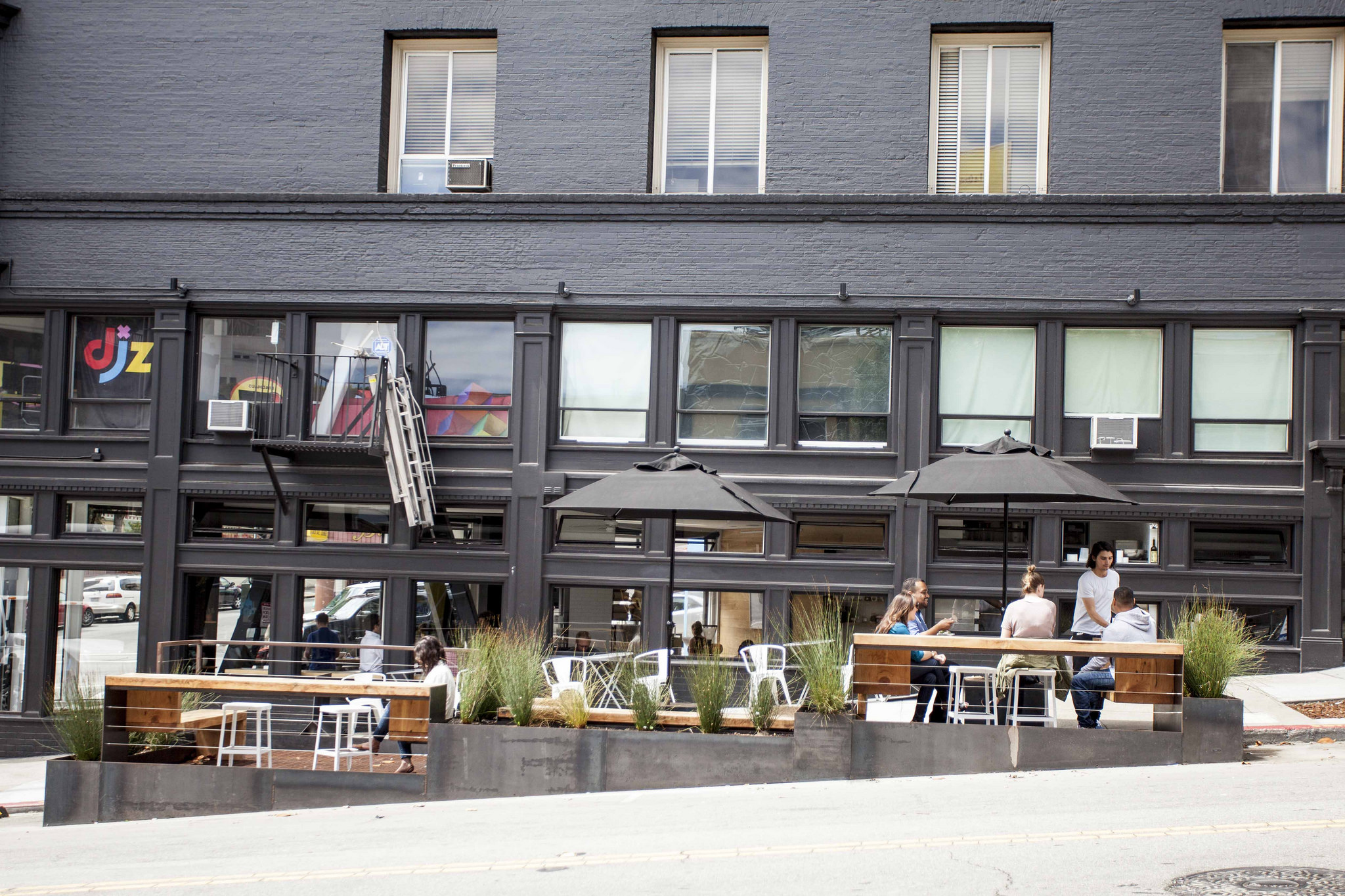 Hoodline reached out to the owners of Réveille Coffee, Christopher and Tommy Newburry, to find out any more information about the project. Update, 1/11: Christopher Newbury tells us that though they have yet to begin the design process, "the parklet will most likely consist of materials similar to what we used at our North Beach location, which was a lot of natural raw wood and corrugated steel. These materials have proven to work really well/resist the weather and age beautifully."

Newbury says that the deadline for finalizing the design is June 16th, so don't hold your breath for any changes just yet.