If you haven't experienced an evening with Skywatchers, mark your calendar. From 6-7:30pm this Wednesday, the small arts nonprofit is inviting the entire community to the Tenderloin Museum for a free open mic night. Come ready to be dazzled by the neighborhood's diverse, homegrown talent—or maybe even perform an act of your own.

Open mic nights are just part of the programming Skywatchers creates with, for and in the neighborhood each year. It all started about five years ago, when San Francisco-based choreographer Anne Bluethenthal felt the drive to build a deeper connection with the community. 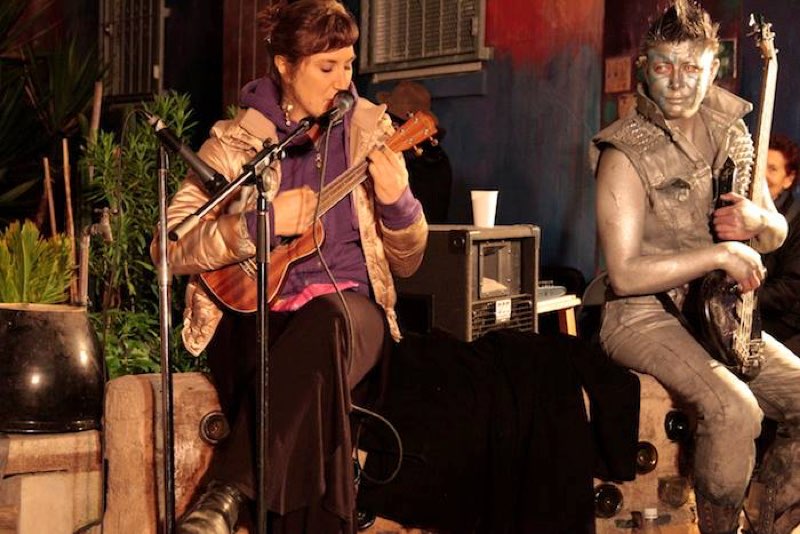 A performance during a Skywatchers open mic night in December.

Bluethenthal, a lifelong dancer, started Anne Bluethenthal & Dancers in 1994, with the goal of producing performances on timely topics, like violence against women, racism, and global warming.

"As the years went on I was creating more and more community around the work I was doing in the theater ... and more and more larger communities internationally," she told us. "The more engaged I was in those communities, the less satisfying it was, because I was doing a piece of work around which we built community for up to a year, but really only lived for a few nights."

At the same time, she said, she was displeased with the increasing commodification of art. So she set out to create a whole new economy, starting with performing 50 random acts of dance around the city for a year.

“Every week, my dancers and I would leave the studio, and we would just go somewhere," she said. "We’d just pick a spot, arrive, dance, and then leave, as a way to sort of just give it away and make it part of the flow of life."

The random acts of dance didn’t stop after the year was up. But Bluethenthal soon realized that while she wanted to continue that sort of work, what she really wanted was to know a place better and understand it.  Intrigued by the The Luggage Store’s work in the community, her first stop on this new quest was the Tenderloin National Forest.

At first, her plan was to bring her dancers and create a site-specific piece in the space. But once she began meeting residents of the neighboring Senator Hotel, she realized that she wanted to work with people who actually lived in the Tenderloin.

Throughout the following year, Bluethenthal interviewed more residents, turning those conversations into a “soundscape” for a free live performance in the Forest. In addition to bringing in dancers from her company, the performance starred a couple of Tenderloin residents she had worked with closely over that year.

A mini documentary on Skywatchers and its impact on residents.

Skywatchers has since received a small amount of funding to work with residents of the Senator Hotel five additional sites, including Larkin Street Youth Center and a few other SROs managed by the Community Housing Partnership. Each of Skywatcher's facilitating artists has their own process, Bluethenthal says, but hers is pretty simple: "We hang out. I say I have a methodology, and it’s called show up, hang out, eat pizza and talk. My thought was I could show up with an agenda, but what the residents show up with is what needs to happen."

"If I showed up as a choreographer and said, ‘I’m going to make dance,’ nobody would have stayed in the room," she added. "But if the television is on and we start talking, then we get somewhere. For years, all I really did was show up and talk and take notes.” Her notes encompass both larger themes, and sounds or movements that can be woven into future performances. 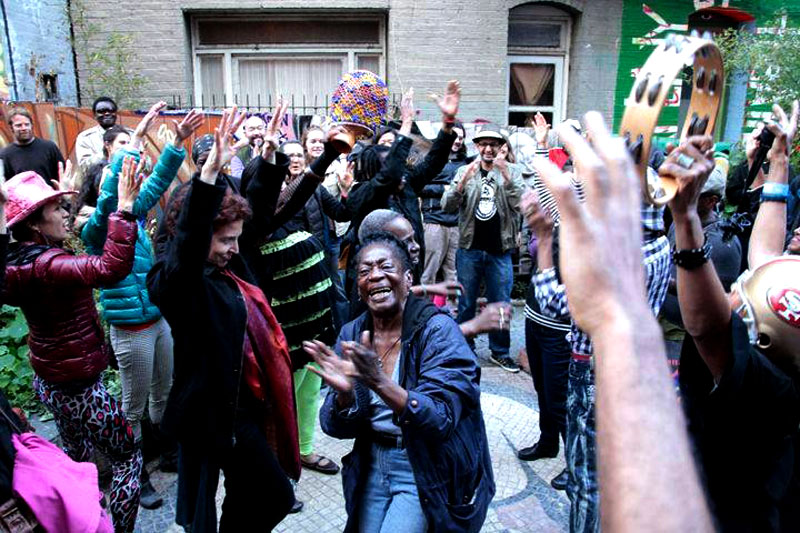 Looking forward to the next year, Bluethenthal says Skywatchers hopes to tackle a number of themes, including what “home” means, the right to “free sleep,” the need for expanding wi-fi access to SROs in the neighborhood, and the need for more green space.

She also has her hands full fundraising, building new partnerships with larger nonprofits in the neighborhood, and enabling the program to provide economic benefits for the residents involved, as well as salaried employment opportunities.

Bluethenthal says she was recently asked by a participant whether Skywatchers is actually changing anything. Her answer: yes. “It’s my job to make art. Yes, I’m your friend, and yes, I’m here and yes, I care. And yes, I want to change the world … But my tools are this. And the fact that you all feel safe here, and seen and heard, is already a piece of social change happening. That would be enough, but it’s not all I’m after. I’m after more than that, and we’ll see…”

She sees her small-scale approach as a more meaningful way to make change for people living in the neighborhood. “There’s a lot of money being poured into places like the Tenderloin for big-scale stuff that never reaches the actual humans. And that’s a problem," she said. “I feel like I’m coming from the other side of that; I’m reaching the humans.”

After tomorrow's open mic, the group's first major performance of the year will be held at the end of May. We'll be sure to share more details once they're set.