Planning Commission Weighs Reopening Door To Massage In The Tenderloin

This article, written by Jonathan Newman, was originally published in Central City Extra's March 2016 issue (pdf). You can find the newspaper distributed around area cafes, nonprofits, City Hall offices, SROs and other residences, as well as in the periodicals section on the fifth floor of the Main Library.

In December, in one of her last acts as a member of the board’s Land Use Committee, Supervisor Jane Kim introduced legislation that would amend a 17-year-old Planning Code provision prohibiting new massage parlors in most of the Tenderloin.

That 1998 rule, sponsored by then-Supervisor Leland Yee, was the result of heavy community lobbying against liquor and prostitution associated with storefront massage parlors—of which there were 22 in the TL. All had been cited for solicitation, sex trafficking and/or racketeering.

Under Yee’s legislation, only health clubs and licensed physical therapists could provide new massage services within the broad boundaries of the North of Market Residential Special Use District, an area that encompasses the vast majority of the Tenderloin.

If it passes after a Planning Commission hearing, the first beneficiary of Kim’s ordinance could be Onsen HolisticSpa and Tea Room, a Japanese-themed restaurant and spa. Onsen’s owners, husband and wife Sunny Simmons and Caroline Smith, bought a 3,000-square-foot, single-story brick building at 466 Eddy St. (formerly Volkswagen repair shop City Automotive) in 2013. They have been rehabbing the structure, in hopes that the code gets changed.

In January, the Planning Department found that Kim’s ordinance did not trigger the need for an impact review under the California Environmental Quality Act. The next step is a public hearing before the Planning Commission, now scheduled for March 10th, to determine if the ordinance fits the city’s priorities for the co-existence of neighborhood businesses and residential enclaves.

Kim’s proposed ordinance would allow a new business to provide massage as an accessory to its main business—in Onsen’s case, a restaurant—if it gets a conditional use permit from Planning. Applicants for conditional use permits must persuade the Planning Department that their proposed use is necessary or desirable to the neighborhood, resolve any question of potential negative impact and demonstrate compliance with the city’s General Plan. A showing of balance between the neighborhood business and the surrounding residential footprint is basic to answering the conditional use question.

Michael Nulty, executive director of Alliance For a Better District 6, remembers the multiyear campaign to rein in the proliferating liquor licenses and storefront massage parlors back in the day.

“Great work was done by Jim Thompson, property manager of Aspen Apartments, David Baker of North of Market Planning Coalition and Ana Bolton of Adopt-A-Block,” Nulty said. “They collected statistics and presented evidence to the Planning Commission and the board, especially on the difficulties for the neighborhood’s kids in navigating public intoxication and the street activity in front of the massage joints.”

But times and real estate values have changed. The Tenderloin is home to new businesses, many are well-funded, and new rules are being made for a city riding the tiger of economic development.

21 Club is gone and will be replaced by Big, a high-end cocktail lounge. Original Joe’s long ago left for North Beach, and its former fire-ravaged site on Taylor now houses PianoFight. Even in the Tenderloin, vacant buildings fetch millions at sale. 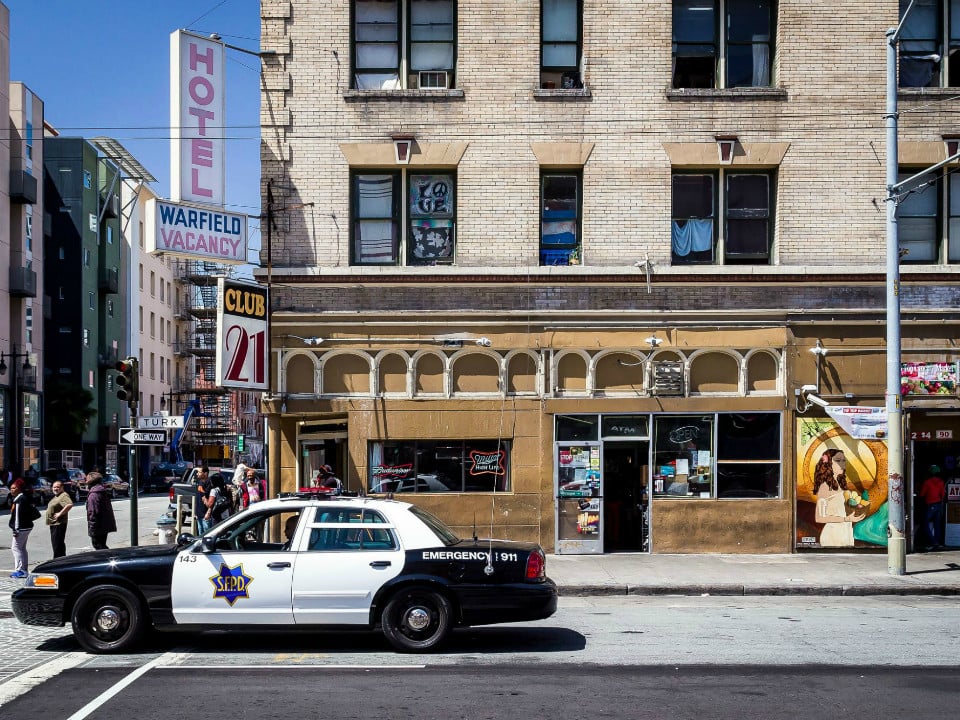 Club 21, before its closure last year. (Photo: Mobilus in Mobili/Flickr)

In their appearances at community meetings, Simmons and Smith describe Onsen—Japanese for “hot spring”—as “an environment of relaxation and peace.” They plan to serve Japanese-inspired food, traditionally paired with sake, but also wine and beer. And they are constructing a steam room, sauna, communal tub and showers in their building, with six rooms for massage and “rejuvenation treatments.”

Kim’s code amendments would allow massage to occupy no more than 25 percent of the square footage of the business. It would only be allowed to operate from 10am to 10pm, and the number of masseurs or masseuses on duty would be limited to no more than three at any one time.

The amendments also call for practitioners to either get a public health permit or be certified by the California Massage Therapy Council. Both require individuals to have at least 500 hours of approved instruction.

The Onsen owners are also seeking a Type 41 liquor license (essentially a beer and wine license) for the restaurant, which seldom gets denied.

Despite that, Nulty is skeptical. “I don’t know—a place with a liquor license that offers massage? That might be a first for the neighborhood,” he said.

Onsen’s owners declined to be interviewed for this story. Supervisor Kim did not return The Extra’s requests for comment on her proposed ordinance.

San FranciscoTenderloin
About 19 hours ago