‘Vision Zero’ Has Yet To Reduce San Francisco Traffic Fatalities

Since it was adopted two years ago, Vision Zero, San Francisco’s program to eliminate traffic fatalities in the city by 2024, has met and exceeded many of its goals ahead of schedule. Complete 13 miles of street improvements on high-danger roads a year? Check. How about 24 traffic calming projects in 24 months? 30 were completed by February.

However, there is just one nagging number that hasn’t yet gone the way the Municipal Transportation Agency would like: traffic fatalities have remained flat at 31 in 2014 and 2015.

2016 is already off to a bad start. Officials estimate that fatalities are already up to 6 or 7 in the first few months of the year. On Feb. 6, for example, three people died in a crash at Brannan and 9th streets after a brief police chase.

At the March meeting of the Muni Citizens’ Advisory Council, one council member griped about the persistent numbers after a briefing on Vision Zero by Mari Hunter, a MTA senior transportation planner.

“So you’ve met all the goals of number of projects completed and there’s not one practical change has happened?” council member Stephen Cornell asked. “That nothing has changed is bothersome to me.”

Hunter’s take is that it’s too soon to really tell what is happening since two years is not much of a sample size.

“If you ask any good statistician, it takes a few years to see an actual trend,” Hunter said. “Even if we say [fatalities] go from 31 to 30, that would not be, ‘Oh, we’re trending down.’”

In the meantime, the department is learning from its progress so far and comparing techniques with similar programs around the world. 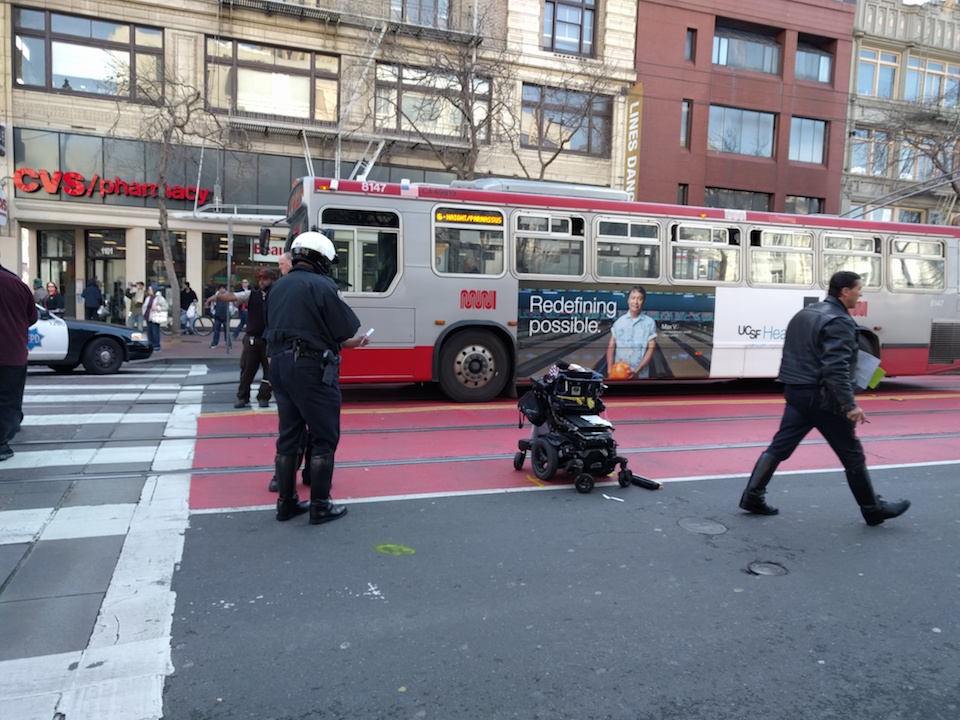 On February 5, a city vehicle turned onto Market, striking and killing a disabled woman in a wheelchair. Photo: Brittany Hopkins/Hoodline

Pedestrian fatalities have been halved since Sweden launched its pedestrian safety initiative in 1997, according to the San Francisco program’s website. New York, Chicago, Seattle and several other American cities now have Vision Zero programs.

“We knew from the outset that this is an iterative process, we know that we’re not doing everything perfectly right now.” Hunter said. “Things that we are doing well we’re going to continue to do and when we meet with folks from New York and they say, ‘we did this instead,’ we can adopt that here.”

Nicole Ferrara, executive director of the advocacy group Walk SF, believes that the city needs to continue prioritizing and building strong pedestrian safety projects that are too often caught up in lengthy environmental review processes or weakened by compromise during the planning process.

In addition to the fiery multi-fatality SoMa wreck, other collisions around the city have been drawing attention this year.

On Feb. 5, a city-owned vehicle struck and killed a disabled pedestrian in wheelchair who was crossing an intersection on Market and 7th streets. Ferrara believes there are too many left-turn restriction exemptions for taxis and commercial vehicles in areas like mid-Market. In response to the death, advocates are also calling for the removal of commercial vehicles from the exemption.

There are a few exceptions including fatalities on Caltrans operated freeways. In 2014 and 2015, 11 total fatalities on freeways were excluded from the total.

The data, published by the San Francisco Department of Public Health, includes all varieties of traffic fatalities in San Francisco ranging from vehicle on vehicle, to vehicle and pedestrian. The wide variety of variables led one member of the public to suggest that the city does not count collisions that result from bad behavior, such as a drunk or erratic pedestrians.

Muni did not return a request for comment by the press deadline.