Since the mid-1980s, La Canasta (3006 Buchanan St.) has been a neighborhood favorite for fast, authentic Mexican fare served in a warm and friendly environment. At the helm of the restaurant is Luis Alberto Mier and his wife, Lili, whose traditional family recipes have kept regulars coming back across generations.

We caught up with Mier the other day to chat about his business, his customers, and the secret to making authentic Mexican food. 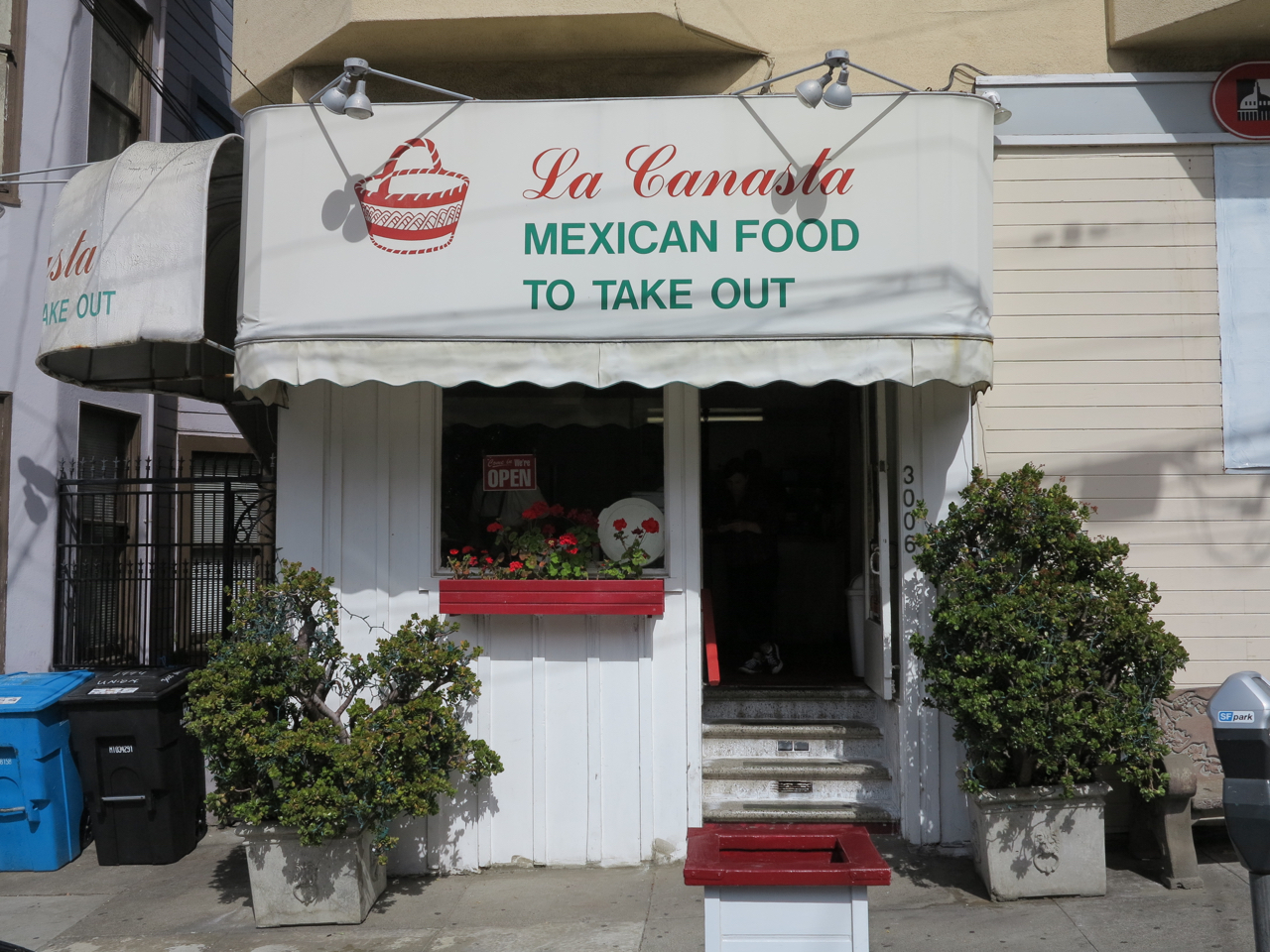 I'm originally from Northern Mexico, a place called Torreón. That's in the highlands of central northern Mexico. My wife and I came here back in '81, but I actually went to college here in the '60s.

At San Francisco State. I have a degree in chemistry from there. I worked for several years down in Mexico, then in Germany for a few years. We eventually decided to come to the States because I had a resident visa.

At that time, it was just my wife and I. I couldn't get back into chemistry, because I only have a B.S. in chemistry; I didn't have a master's. Usually, here in the States, it's required. So time went by, and I got an offer from my friend, who had a small chain of four restaurants here in the Bay Area, to help him as an assistant manager, since he was looking for people who were bilingual.

What was the chain called?

Carlos and Pancho's. That was in '82. I worked there until my wife and I opened our first store in '87. She was a restauranteur in Mexico; she's from Veracruz, and her family had a restaurant there. That's how I met her in the first place.

When we moved to the U.S., she started doing some minor catering from our kitchen. Eventually, her business grew to the point where we needed a commercial kitchen. We started looking around, and we found a place at Filbert and Fillmore—that was in '87. Then, five years later, in '92, we opened this one.

We were working together in both stores until our 10-year lease expired at the Fillmore location in '97. The landlady didn't want to give us another long lease and she doubled the rent, so we had to let that one go. We consolidated into this location.

Do you still do catering?

Yes. In fact, we are doing a big order for The Town School tonight. 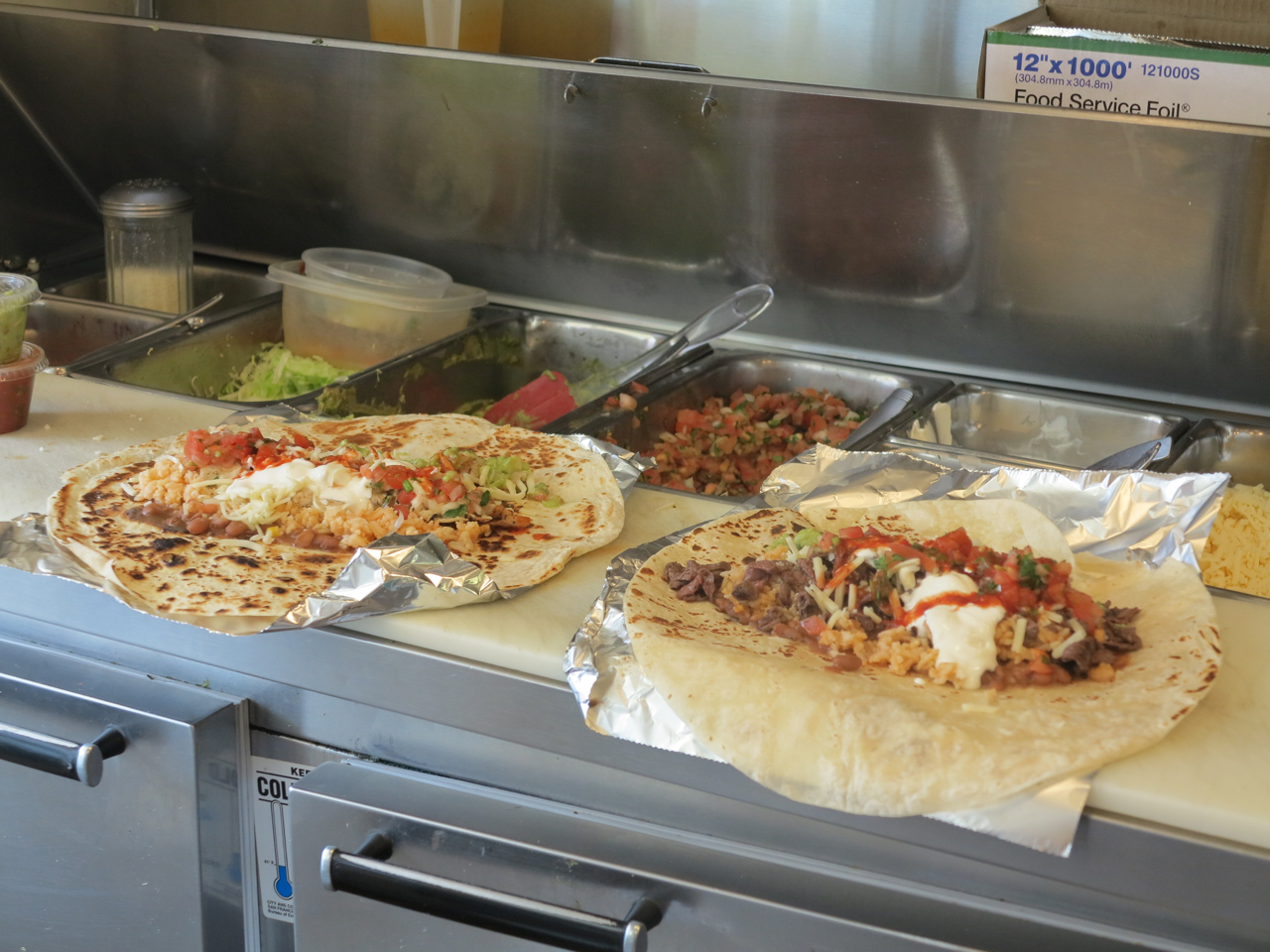 So your wife primarily handles the cooking?

Yes. My wife and my sister-in-law. My mother-in-law used to be here, but now she's in her 80s. She helps sometimes with special things, though.

And you handle the business side.

Right. I had some previous restaurant experience in my school years; I worked in a Russian restaurant out in the Avenues for about three or four years. I always had an interest in cooking—back in school, they would call us chemists 'the cooks,' because we were always cooking up something in the lab. Now I'm just doing it with things I can eat and like.

Why did you call your restaurant 'La Canasta'?

Well, the basket—which is what 'canasta' means—is a very traditional and often disregarded way of procuring raw ingredients for a kitchen. When people would go to el mercado, they would usually bring big baskets. The housewives would go and get the vegetables and chicken, and then they would bring all the raw ingredients to the kitchen and cook tamales, burritos, or anything else. Then they would take the same basket, line it up with some cloth, and put the goodies in there and bring it to the town square, bus station or train station to sell.

How have you developed such a loyal following?

I think it's all due to my wife's cooking. Over the years, she's always cooked very light: no grease, no lard. It's always as fresh as possible, wholesome, clean, and tasty. You combine those things with a good price, and it's usually a good combination.

What's it been like to run a business in this neighborhood for so many years?

Well, this was our first choice for a place to live, and we liked the neighborhood. We've been in this neighborhood for almost 30 years, so we feel right at home. We treat all of our regulars like family, and over the years, we've made many friends and loyal customers. We feel right at home here, although businesses like ours are becoming more and more rare. 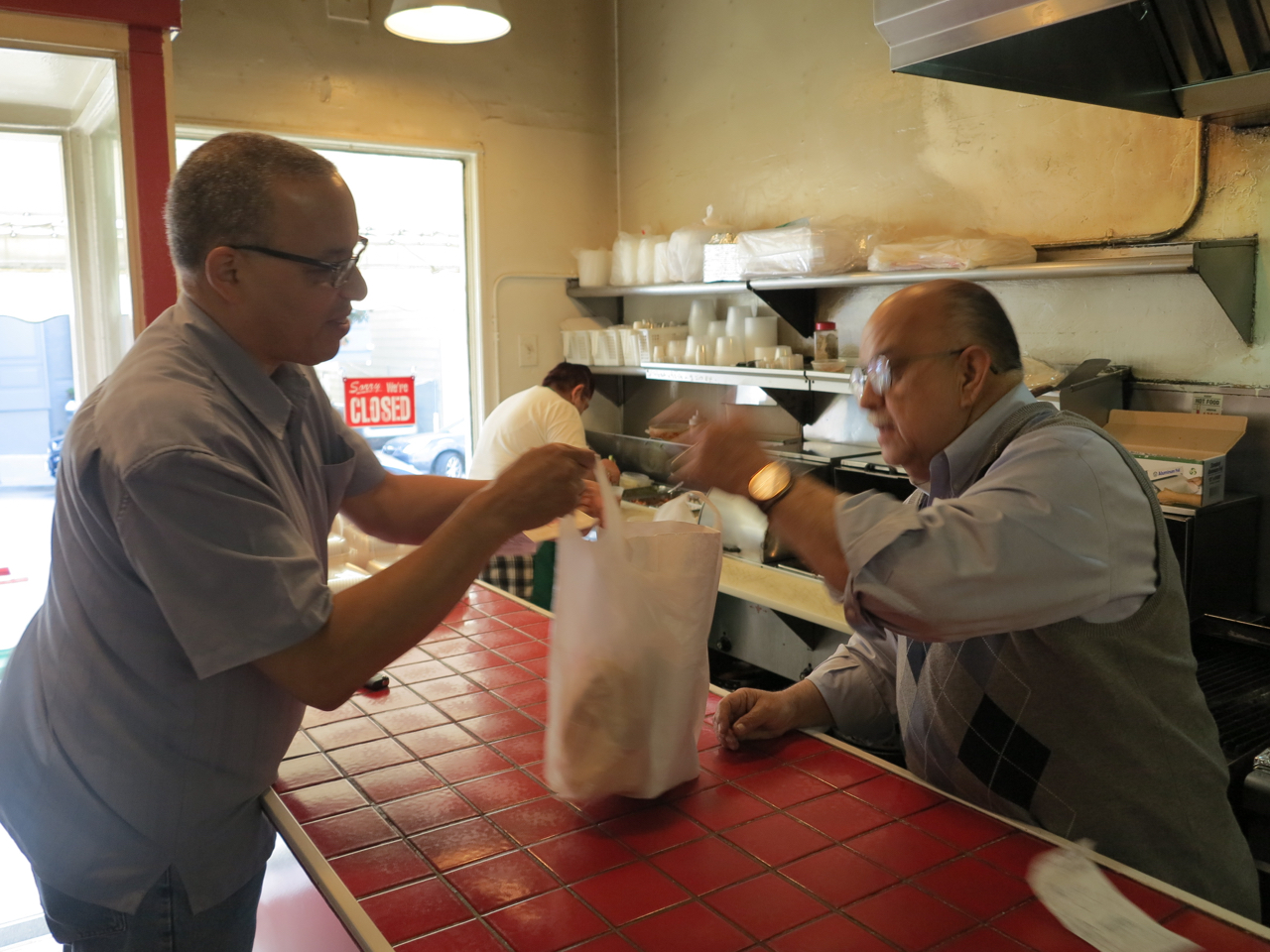 How have you been able to stay afloat for so many years as a small business?

Well, part of it has to do with keeping it consistent: a good product at a reasonable price. That's really a formula for success right there. Over the years, we have had so many people who would come here and try the food for the first time, and eventually, they would bring their families and their friends. It's almost been like a club. We think of them all as part of our business. That's why I have the red carpet over there, because it's really the customers that make the business.

So you literally roll out the red carpet!

Right. If we don't have customers, then we wouldn't exist. It's as simple as that.

Also, the fact that we are located on a side street helps us keep a low overhead with things like rent. By not being right on Union, we are able to pass the savings on to our customers.

What makes certain Mexican restaurants taste more 'authentic' than others?

Well, the secret comes from generations of traditional recipes, but I also have a little formula that I will write down for you. I call it 'FACTS.' It stands for Freshness of ingredients, Authentic recipes and ingredients, Clean cooking with no harmful ingredients, Traditional in its making—you have to make everything by hand—and finally, it has to be Satisfying. If you can accomplish that, you will have an authentic restaurant. 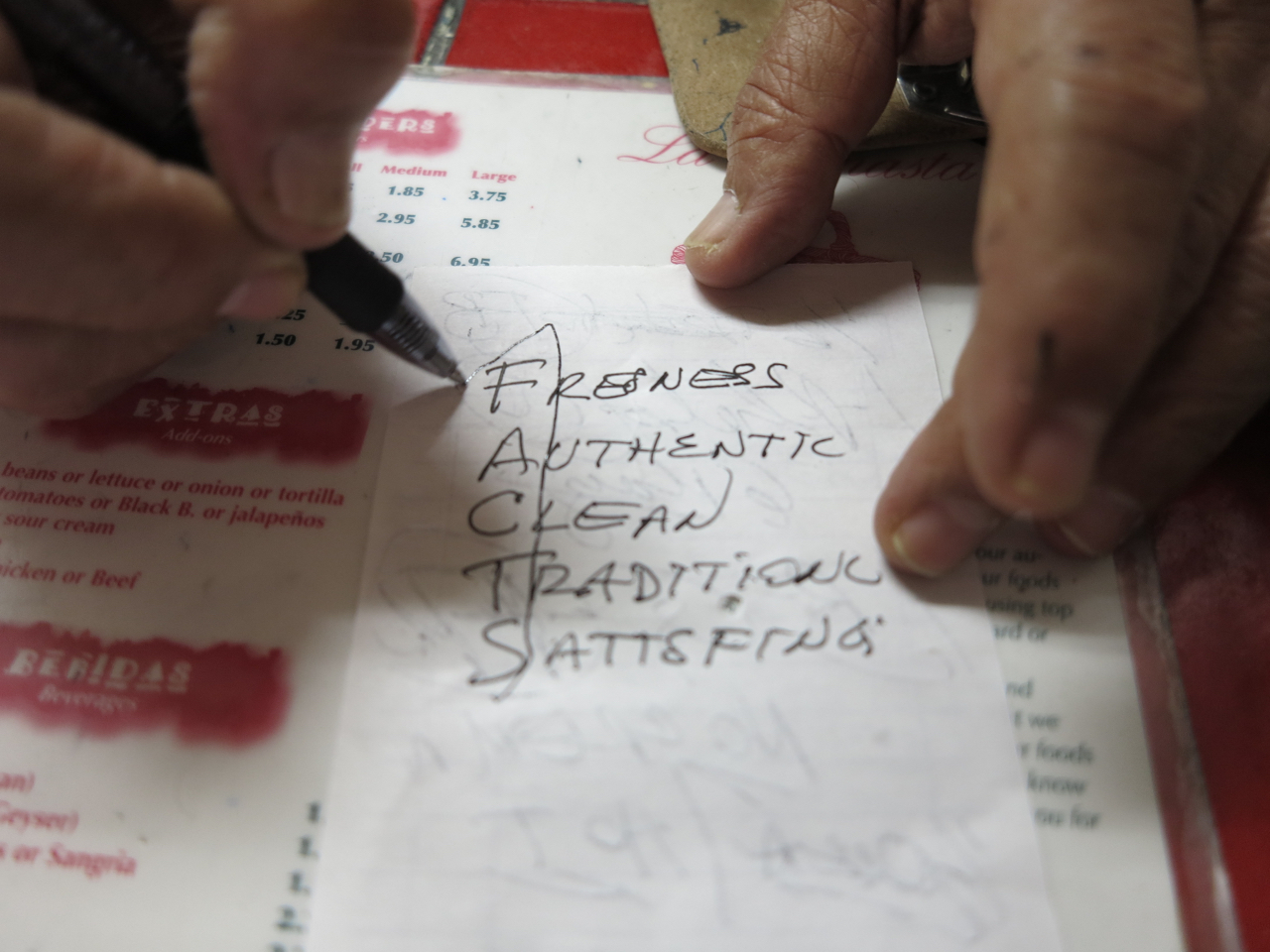 Eventually, we'd like to go nationwide, or even worldwide. There is a high demand for simple, fresh and quick food. I have a couple of children that are around to help with that, as well as many relatives who are in the business, some of whom are in Mexico.

The reason I want to do this is because a lot of our regulars have moved to other towns and cities, especially around the Bay, and they keep encouraging us to open another restaurant in their neighborhoods.

When would you hope all this to happen?

Well, that's a matter of finance. That's the most difficult part.

After all these years, what about this job keeps making you happy?

Seeing how happy our regulars are when they come back, bringing their friends and family. You know, we don't advertise anywhere; we rely on word of mouth. People believe what they are told by their friends, and now we are seeing a third generation of regulars.

I love welcoming all our regulars. For me, this isn't just a business, where you just coldly look at the profits. We make a living and it's good, but it's great to get to participate here, meet the regulars, keep in touch with them, visit with them, and now welcome their children.

Also, we feel like this is a lifestyle for us. It's an extension of our kitchen, and we can welcome our friends and neighbors. For me, that's the biggest reward.

San FranciscoCow Hollow
About 20 hours ago