After nearly a decade of planning, Rec and Parks is almost ready to break ground on Guy Place Mini Park in Rincon Hill. But that's not stopping a few residents bordering the future park from putting up a last-ditch effort to save two trees slated for demolition to make way for the public space.

For those unfamiliar with the plans, Guy Place Mini Park is set to take over 4-8 Guy Place, a 4,000-square-foot fenced-off lot off First Street between Folsom and Harrison. 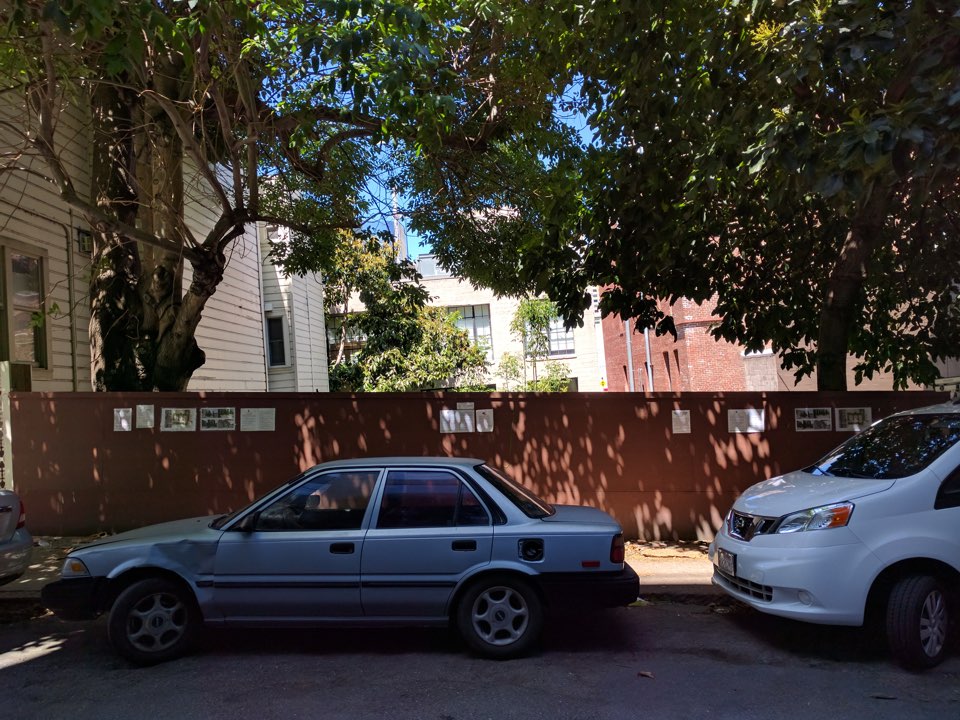 According to Rec and Park's documentation for the project, the city purchased the lot with developer impact fees in 2007 as part of its effort to create a system of public open spaces for the increasingly dense neighborhood—a stipulation in the Rincon Hill Plan adopted in 2005.

Over the next year, Rec and Parks held three public meetings and came up with a plan for the lot. The resulting design called for a plaza separated into three different "rooms" by low ferns and accented by 25-foot towers wrapped in vines of Boston Ivy. At the center of each distinct space would be a "water feature," and the entire park would be screened by lush bamboo stalks. 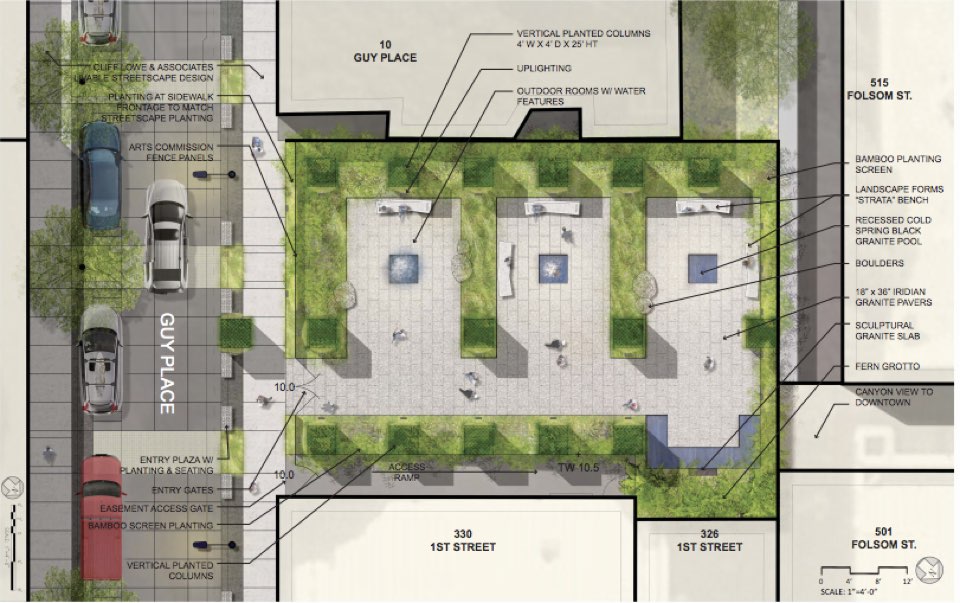 Rendering of the future park. A full presentation on the design concept is available in this PDF. (Image: Rec and Parks)

After a long delay thanks to the recession, Rec and Parks picked the project back up in 2014, when development impact fees were available once again. Another community meeting was held that year before the project moved on the approval process and received a green light from the Rec and Parks Commission in February 2015. Since then, the project manager, Marvin Yee, has been working to line up a contractor and begin construction.

At the same time, however, a nearby homeowner, Jessica Evans, is on a mission to save the decades-old ash and avocado trees currently standing in the lot.

Evans is a piano teacher who lives and works on the first floor of a First Street building bordering the lot. Since she purchased her condo in 1996, the trees have filled an entire window in her place.

Given her personal connection to the trees, Evans is advocating for building around the trees and says she wishes she could have been part of the process years ago. Rec and Parks insists that neighbors within a 300-foot radius were mailed notifications about all four community meetings, in addition to publicity through community email blasts, the Rincon Hill e-newsletter, homeowner association boards and postings on the lot's fence, but she says she never received mail from the department or an email about the project. If she had, she would have gone to the meetings in a heartbeat and would have worked to get the trees registered as historically significant, Evans said. 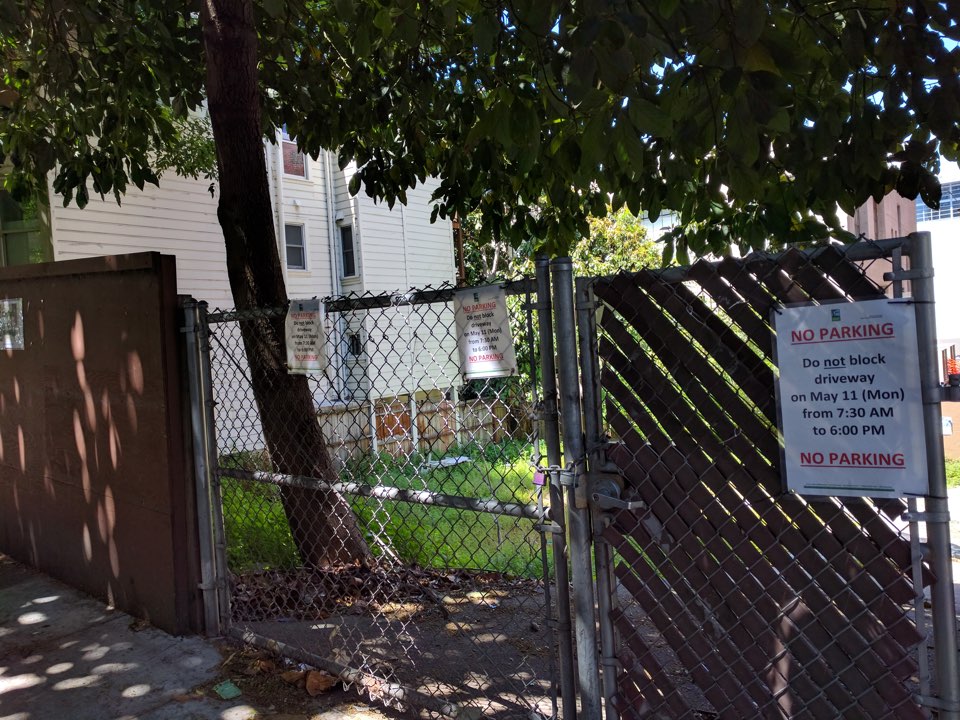 Other residents, from her building and the surrounding street, weren't aware of the project either, she says. So, to raise awareness of the trees' impending fate, Evans and one of her students picked up $90 worth of chains and locked themselves to the trees for a few hours on April Fool's Day. She's also started a Facebook page and online petition for the cause, and has been in touch with the project manager and "everyone at City Hall."

The project manager has stopped responding to her concerns, Evans said, but he did publish an FAQ on the project website that responds to many of her questions and concerns.

As for why the trees are being removed, the FAQ states: "A City arborist assessed the trees to be poorly structured due to years of severe pruning away from overhead wires prior to the City’s purchase of the site. The newer shoots are weakly attached and particularly prone to breakage. In addition, fruit droppings attract rodents and damage parked cars. Although meeting participants expressed interest in maintaining these trees, they understood the challenge in complying with the Americans with Disabilities Act (ADA) at this steep site, and the limited opportunity for developing the site into a public park. After thoughtful consideration the meeting participants supported a design to fully utilize the site without the existing trees." 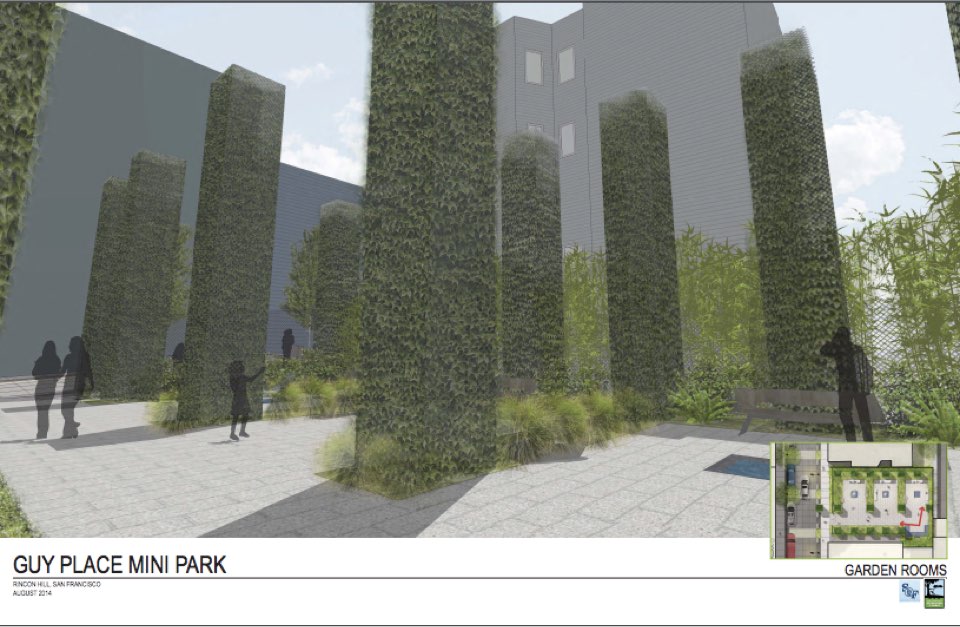 Clarifying the ADA compliance challenges, Joey Kahn, media relations and policy manager for Rec and Parks, told Hoodline via email that the community was originally presented with two options for ensuring the steep, sloping lot would be wheelchair accessible, which is a requirement for all new parks. The first option was creating a series of ramps that would "occupy over half of the site." The community ultimately chose the second option of elevating the entire lot, "thereby removing the need for ramps and maximizing the site for recreational use," he explained.

"Both of these options require the construction of retaining walls that would cause great harm to the existing tree roots, since no grade change or construction activity should occur within the drip line of a tree for tree root protection," Kahn said. "This would not be possible to avoid in either development scenario."

"After explaining these reasons to stakeholders, they too understand and support the removal of the trees for the improvement project," he added. "One person screaming loudly does not change these realities." 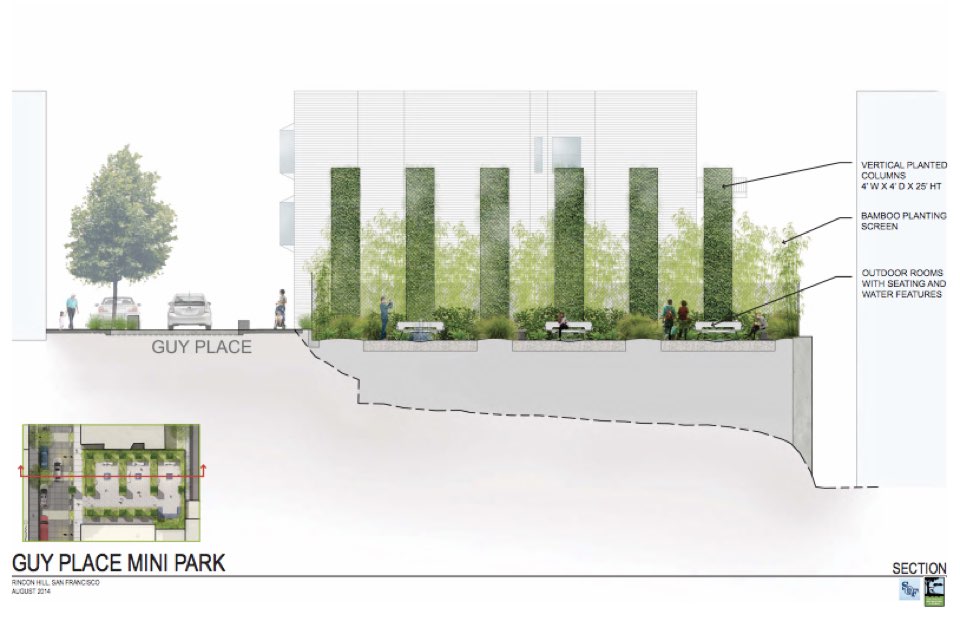 A quick stroll past the future park shows that Evans isn't alone in her concern for the trees. Scott Wheeler of Urban Arborist has posted a full-page letter on the lot's fence explaining how healthy the existing trees are, despite their neglect. "In my experience, the Bureau of Urban Forestry would not allow these trees to be removed as they quality as 'significant trees' according to the public works code, and they both have sustainable canopies," the letter states. "With appropriate pruning, these trees could be developed into attractive specimens which contribute significant value to the immediate area ...”

“... Removing two large, mature trees from an otherwise sterile environment flies in the face of every pro-tree policy the City portends to promote,” the letter goes on to say. 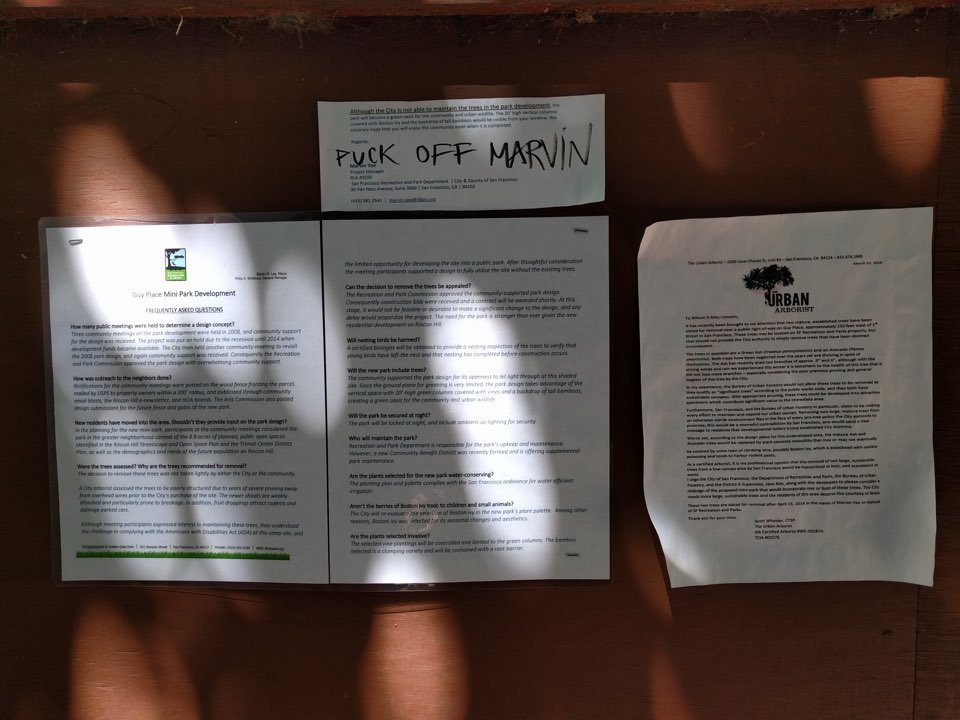 Wheeler's letter to the left of Rec and Parks' FAQ on the tree removals and an angry note left for the project manager.

The trees aren't Evans' only concern. The planned water features are "laughable" given the current drought, she said. The mini park will lack any amenities for the neighborhood's growing population of children and dogs. Boston Ivy is toxic to humans and animals. And the published designs no longer accurately reflect the latest design, she said.

"This is huge," Evans said of the project overall. "We need to get this right."

However, Rec and Parks' archives do show that community support for the design concept has far outweighed opposition. The packet compiled for the Rec and Parks Commission public heading contains 15 letters of support and one letter of opposition.

Providing a wider perspective on the park, Andrew Robinson, executive director of the newly-formed Greater Rincon Hill Community Benefit District, told Hoodline that it will be the first in a network of five public spaces being built for the densely-packed neighborhood. The CBD is partnering with Rec and Parks to help manage and maintain all five—which include the future Transbay Center's rooftop City Park and Under Ramp Park. 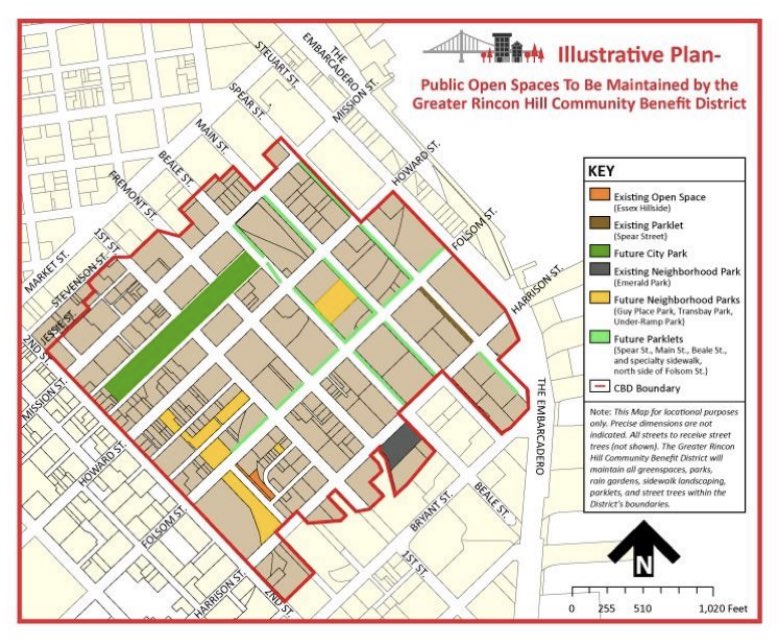 As for Guy Place's role in the network, Robinson said that it's meant to be a small respite "steps from the rush of the city." It'll ultimately be a place to sit by yourself with a book or with a friend, he added.

One design element the CBD has discussed with Rec and Parks is the possibility of adding a place just outside the mini park for dogs to relieve themselves, given that dog feces is a "serious challenge" for the neighborhood, Robinson noted.

Countering claims that the overall design for the mini park has changed since it was approved by the Rec and Parks Commission last year, Kahn with Rec and Parks confirmed that "all elements of the park design were put out to bid. However, in an unpredictable bidding climate, it is common practice to identify 'alternate bid items' that could be dropped from the project without compromising the design concept if bids come in too high. This avoids the added cost and time to repackage the project for re-bidding. The alternate bid items selected were the widened sidewalk, additional green columns, and plumbing for the sculptural elements." 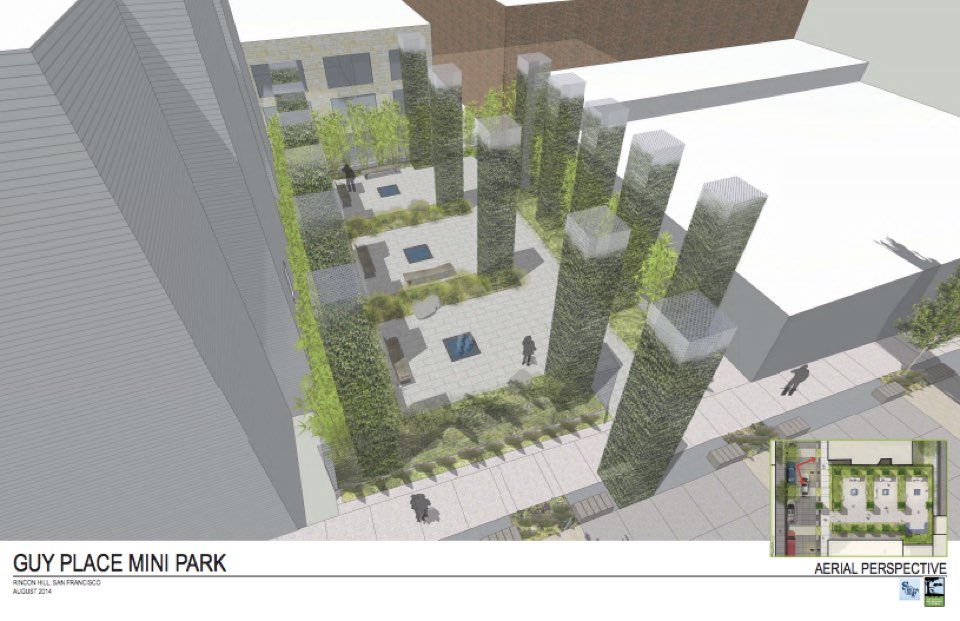 In regards to whether the decision to remove the trees can be appealed, Rec and Parks' FAQ states,"The Recreation and Park Commission approved the community-supported park design. Consequently construction bids were received and a contract will be awarded shortly. At this stage, it would not be feasible or desirable to make a significant change to the design, and any delay would jeopardize the project. The need for the park is stronger than ever given the new residential development on Rincon Hill."

Regardless, Evans says she'll continue to build an army because "people who live right here," who are paying for it through the CBD, aren't aligned with the project.

What's your stance on the plans for Guy Place Mini Park? Let us know in the comments.