A five-block section of Golden Gate Avenue, stretching from Polk to Market, is set for a redesign to make streets and sidewalks friendlier to pedestrians and bikers. The plan would see the removal of one traffic lane from the three-lane one-way street, and the addition of a buffered bike lane, the first sign of bike infrastructure in the neighborhood.

The SFMTA has designated that stretch of Golden Gate as a "High Injury Corridor," meaning that its pedestrians and bicyclists are more likely to be involved in collisions, according to SFMTA spokesperson Ben Jose. "On average, one person walking or biking is hit by a car every 38 days on the six-block stretch of Golden Gate Avenue between Van Ness Avenue and Market Street," states the project page. In the past five years, 48 pedestrians were hit.

The reduction in number of lanes is meant to help decrease traffic speed, and the remaining lanes will also be narrower.

The new eastbound bike lane will be added to the south side of the street, along with "buffer" space separating bikes and cars by three feet. The parking spots on the north side of the street will be widened. The crosswalks will also be upgraded with painted safety zones to protect pedestrians from cars at crosswalks.

"This project will increase safety and comfort for people biking on Golden Gate," said Jose. "It will also create a more organized roadway for people driving."

The SFMTA's draft for the designs. (via SFMTA)

"We're really excited to see complete redesigns," said Chris Cassidy of the San Francisco Bike Coalition. "It's mind-blowing how clear it is that the Tenderloin is the only neighborhood with a high injury corridor ... Everyone deserves a safe neighborhood, so it's nice to see a start in the form of Golden Gate Avenue."

The city's Vision Zero plan aims to eliminate traffic-related deaths by 2024, but so far, traffic fatalities are not going down. We recently detailed some areas Vision Zero labeled as the most dangerous corridors, and many are within the Tenderloin and Civic Center neighborhoods.

At a recent public hearing, residents showed strong support for the proposed plans for Golden Gate Avenue. Greg Moore, the executive director of Saint Francis Living Room, said he looks forward to the street improvements. As a worker in the Tenderloin, he experiences Golden Gate Avenue's traffic firsthand.

"Literally, Golden Gate turns into a drag strip," he said about cars driving during rush-hour. "The number of elderly and disabled make it a situation that's disaster waiting to happen. All of the proposed parts make sense to us." 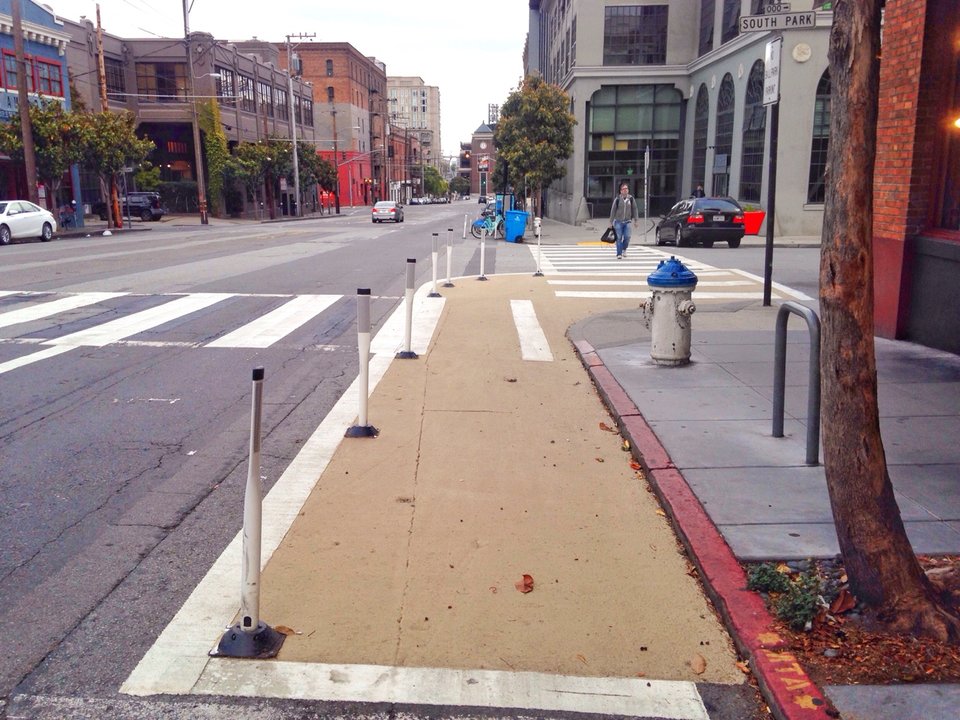 An example of the painted safety zones headed to the Tenderloin. (Photo: SFMTA)

Dan Provence, the project manager of Golden Gate Avenue, responded to some criticism from a Tenderloin business owner who questioned how effective the plan would be in reducing traffic by removing a lane.

"While we're adding delay to Golden Gate during the busiest times, the safety tradeoffs are worth it because that is our top priority," said Provence.

The SFMTA has finished public outreach pertaining to the project and is planning to present its findings to the SFMTA's Board of Directors for a vote in May.

San FranciscoTenderloin
About 24 hours ago