In Their Words: Discovering The Past Of NoPa's Lowell Pharmacy

[Editor’s note: Hoodline is beginning to publish first-person stories from locals about their memories of their neighborhood and beyond. Have a story? Just let us know more — email [email protected]]

“It’s where I grew up, so to speak,” Francisco said. He was fascinated by the doctors, nurses, patients, pharmacy employees, old-time San Franciscans, and people from around the world who frequented the building.

Like his father, Francisco became a pharmacist, working in 16 different pharmancies over the years. Before Walgreens began rapidly expanding, small, independently owned pharmacies were a common sight in San Francisco, but the work was not easy. "A pharmacy was your life," Francisco explains. One pharmacist he knew opened at eight in the morning and worked until 10 at night.

Pharmacists were often held up at gunpoint, by people looking to steal both money and drugs. "In 1948 or 1949, my father's pharmacy got held up and it made the front page," he said. He himself was held up three times. 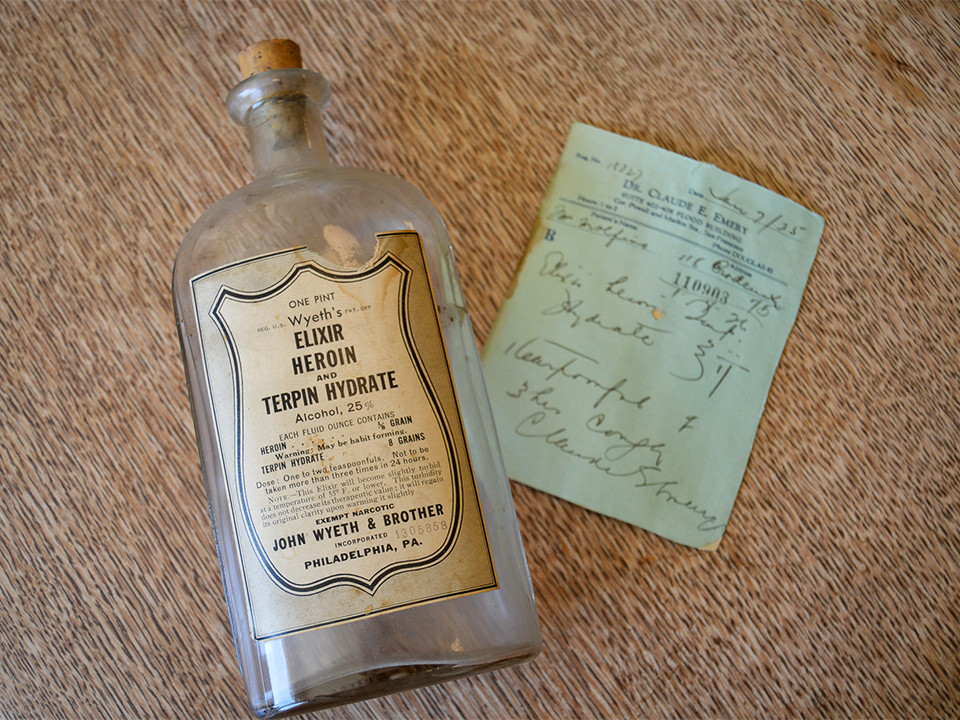 An empty bottle of elixir heroin, along with its original prescription, dated 1925.

In the mid-'70s, Francisco developed a fascination with another of these historic pharmacies: Lowell Pharmacy, which was located on the corner of Hayes and Ashbury, where Bread and Butter Cafe stands today. At the time, what is now the John Adams Center was Lowell High School, and the pharmacy was popular with students for its ice cream.

Of course, patients also went there for prescriptions, many of which are illegal today. "In those days, it was kind of like the Wild West. Drug companies didn't have to prove that things worked," chuckled Francisco.

Below is a glimpse into the golden age of San Francisco pharmacies.

1975 was quite a year. My first son was born, Walgreens was expanding exponentially throughout the city, and the small, independently owned drugstores were going out of business one after the other. 1975 also happened to be the year I met Mr. Merzda Mehdy, the proprietor of the Lowell Pharmacy.

I came to hear about the old drugstore on Hayes Street through a friend, Diana. A year earlier, she had moved to the East Bay, not far from the Sufi Center, where she was a member. One day, while she was at the temple in Walnut Creek, she met an elderly woman. Later, Diana learned that the woman's mother had been Murshida Ada Rabia Martin—one of the most important figures in western Sufism. (Not being fluent in Urdu, I had to look up the meaning of "murshida." It's the feminine form of murshid—teacher or guide.) The elderly Sufi woman was married to Merzda Mehdy, the owner of the Lowell Pharmacy.

Eventually, my curiosity about the old drugstore forced me into making a trip to Hayes and Ashbury. Parking a block away, I walked to the front door. After crossing the threshold and stepping inside, I was struck by the oddest sensation. It felt as though I had entered a world that no longer existed. Beneath my feet was a tiled floor; the counters and cabinets, made of solid wood, were stained a deep mahogany color. The shelving was fancily trimmed, and near the aisle stood a wooden phone booth with a folding, glass-panelled door. Overhead, surrounding the store on three sides, was a balcony with ornate balustrades.

A pungent yet subtle aroma, a smell unique to old-time pharmacies, filled the air. It was the essence of aromatic oils, scented soaps and lotions, liniments, chemicals, botanicals, unguents, dust—and age. Over the span of nearly six decades, the distinctive odor had seeped into every nook and cranny in the store. 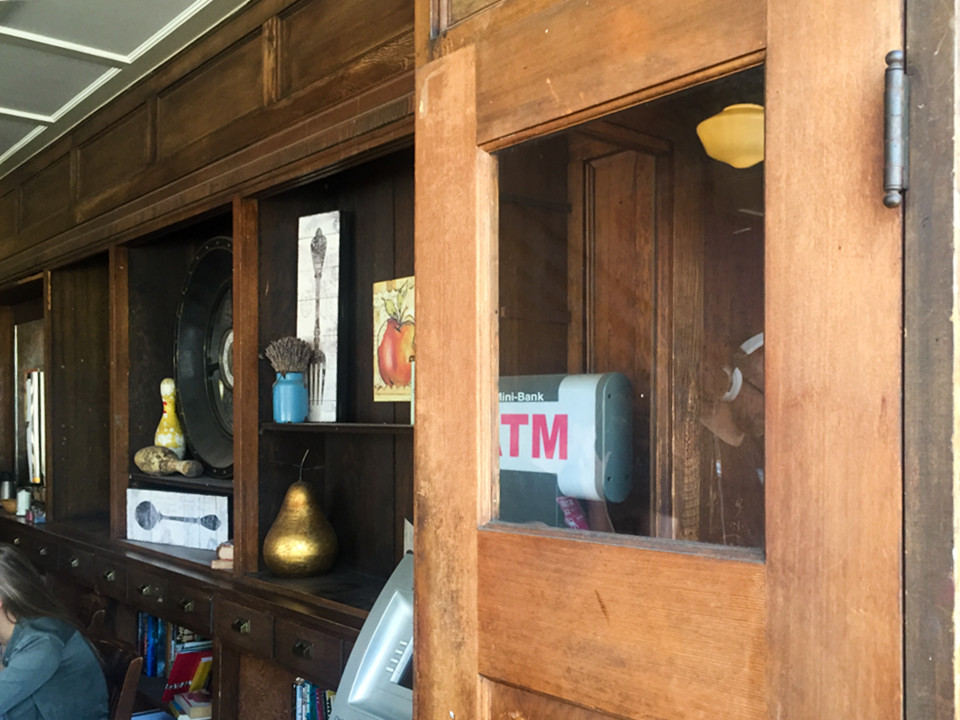 Two men of advanced years were sitting on folding chairs. They stopped chatting when I approached them. One was dressed casually, the other wore a coat and tie. I assumed, correctly, he was Mr. Mehdy. Balding and stockily built, his oval-shaped face had a slight olive tinge to it. Adorning his upper lip was a small, carefully clipped white mustache. His demeanor, his very being was one of kindliness, almost saintliness. He could have been your grandfather or mine or anyone else's, for that matter.

Getting slowly to his feet, he asked me what I wanted, what was I looking for? I detected an accent, though I couldn't identify it; clearly, with the name Merzda Mehdy and a connection to Sufism, he must have been of Middle Eastern descent. To allay whatever fears he may have had—of me being a mugger, shoplifter, dope fiend or something worse—I quickly told him who I was, my pharmacy background, and how I'd learned about him.

That first visit in 1975 to the corner of Hayes and Ashbury was a short one; Mr. Mehdy and I had talked for only a few minutes. I realized, before saying goodbye, there was much more I wanted to know about the man. As I turned and headed for the door, he suggested I come back again.

And that's precisely what I did.

Early on a rainy afternoon in February, I managed to drop by the store. The ensuing months, after my initial visit with Mr. Mehdy, had been trying. There was little time in my life for socializing with interesting old druggists. My newborn son kept reminding me, in his own infantile way, that he needed his father to be gainfully employed.

But try as I might, I couldn't find a permanent pharmacy position. I worked one day here, another day there, filling in for someone who was ill or on vacation. How long could that go on? As dire as my finances were, I couldn't bring myself to signing over my soul to a heartless corporation.

The rain had let up, and I paused briefly before going in. I had only spoken with Mr. Mehdy that one time, and as I pushed open the front door, I realized he might not remember who I was. But he did. He invited me to join him behind the counter, where he was standing next to a rickety space heater. The cold, damp weather, he said, was aggravating his arthralgia. 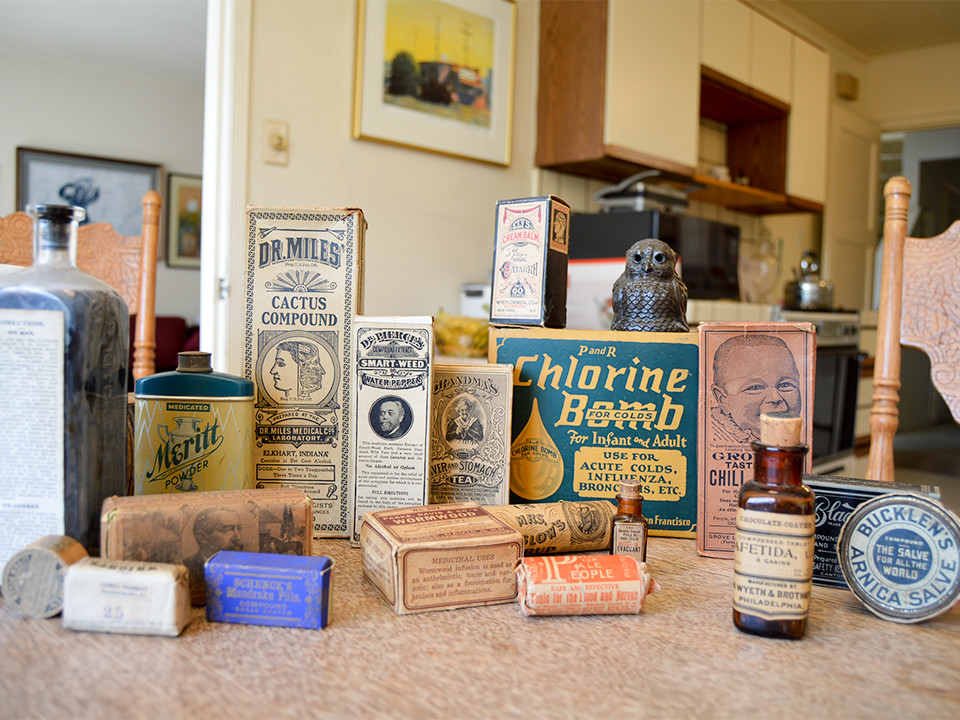 I stayed for an hour or so—listening far more than talking. He told me he was the first Persian Jew to come to San Francisco. Was this true? I thought he was a Sufi. Had he converted from Judaism to Sufism? Of course it was true, no doubt about it. Whether a Jew, Sufi, Holy Roller or whatever, Mr. Mehdy was a man incapable of lying. He then went on to say that he'd been a pharmacist in Persia before coming to America. The year he arrived, I figured, was 1918 or thereabout. (He opened the Lowell Pharmacy in 1921.)

Though he was already an experienced pharmacist, before Mr. Mehdy could practice in California, he first had to take the State Board examination. He chuckled as he relived the day of the exam, some 60 years earlier. One of the questions, he said, was a complicated one about distillation. Because of his limited ability to write in English, he asked one of the examiners if he could answer the question by drawing a series of diagrams. The man agreed, and Mr. Mehdy went on to pass the test.

By the time I saw him again, my income had improved—somewhat.  I was now working part-time in four pharmacies. One was on San Bruno Avenue in the Portola District, two were in the Excelsior, and the last one, a small corner store, was in the Outer Richmond. True, the situation was less than ideal, but I was at least scraping by.

Mr. Mehdy's health, it was plain to see, had deteriorated since we'd last talked. The slight stoop he'd had was more pronounced, his olive complexion had faded to a pasty white, and it was difficult for him to move around. Yet his spirits and outlook were, as always, positive. He mentioned that when Lowell High School was still open across the street, he'd make 90 milkshakes for the kids during the lunch hour. (I don't know when the soda fountain was removed. Most likely it was around the time Lowell High moved across town to Lake Merced.) 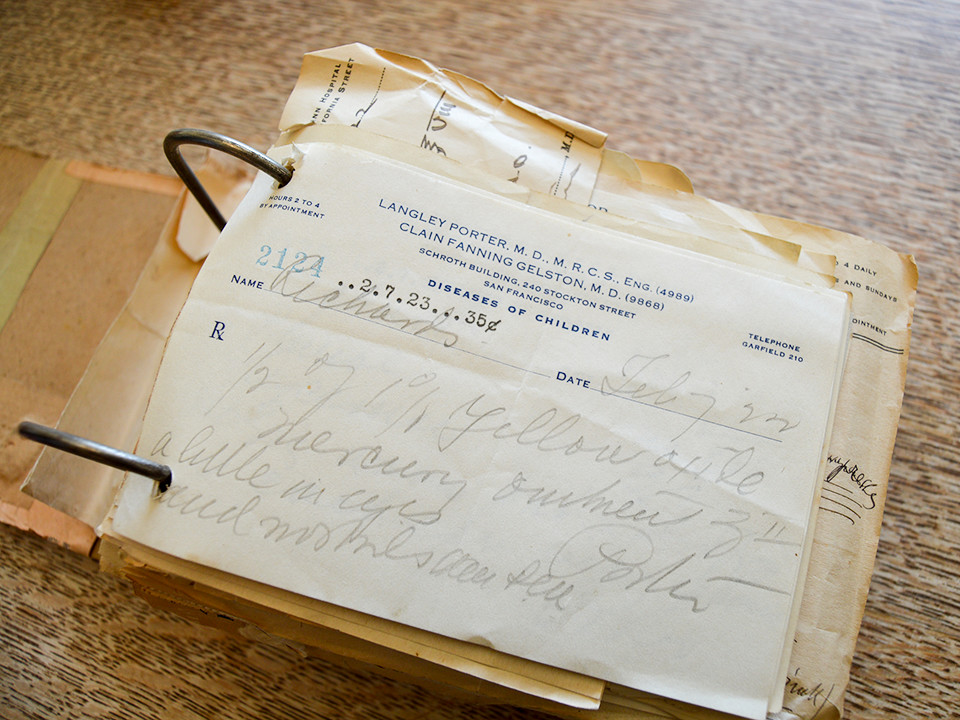 A prescription written by Langley Porter (who has a building named after him at UCSF) that was filled at Lowell Pharmacy. Other prescriptions in the book include those for strychnine, a poison that was then supposed to stimulate the appetites of elderly people, and potassium bromide, and addictive sedative that could turn people's skin blue from lack of oxygen—a snapshot of medical practices of the time.

Before leaving—I had to get to the pharmacy at 28th and Balboa by three o'clock—he informed me he'd soon be closing the store once and for all. Although he lived just a block away, walking to work had become too arduous for him. The little money he made from the business, he explained, was of no importance. He and his wife, the Murshida's daughter, appeared to be quite well-off financially. They owned their home, a flat on Hayes between Grove and Fulton, as well as the building in which the pharmacy was located.

From then on, our chats took place in the front room of his flat. Sometimes, either coming or going, I'd walk by the shuttered pharmacy, stop for a moment and stare. Trash littered the entry, the windows were streaked with dirt and covered from within by paper, and the front door was secured by a padlock and heavy chain. Saddened by the sight, feeling a hollowness in my stomach, I'd continue on my way.

Many years have passed since the closure of the Lowell Pharmacy and Mr. Mehdy's death. If I had inside information on afterlives, angels, cherubim and the like, I'd gladly share it with the world.  Unfortunately I don't. However, should a heaven exist, I'm certain that St. Peter, Meher Baba, the Almighty Himself—or possibly all three—were there to personally greet him and usher him through the pearly gates. Merzda Mehdy was that kind of man.

San FranciscoNoPa
About 6 hours ago