Proposed Western Addition Street Changes Developed From The Ground Up

A plan to make the Western Addition's transit options safer and more efficient has been slowly coming together over the past few months. Planners from the SFMTA have met with community groups to discuss their issues with transit in the neighborhood, as well as problem intersections and streets.

Polling the community to identify problems an creating a plan to solve them may be a unique approach for a city agency, but the SFMTA is giving it their all. At a transportation open house held on Monday night, SFMTA transportation planner Danielle Harris told us that the SFMTA has been talking to the community at Ella Hill Hutch backpack giveaways, Western Addition Sunday Streets, and senior centers.

"Community-based transportation planning is really a way for us to engage the community, understand their transportation needs and collaboratively develop a concept design," said Ben Jose from the SFMTA. "The end goal is to use the plan to create a competitive application for local, state and/or federal funding."

The Western Addition Community-Based Transportation Plan (WACBT) is still very much in progress, but community members have identified a few key areas and proposed changes to tackle:

Two streets running parallel to each other were identified as hot topic areas: Turk Street and Golden Gate Avenue, between Divisadero and Gough streets. Neighbors are concerned about pedestrian safety (particularly for children), speeding, congestion and walkability. Two options were proposed for each street. 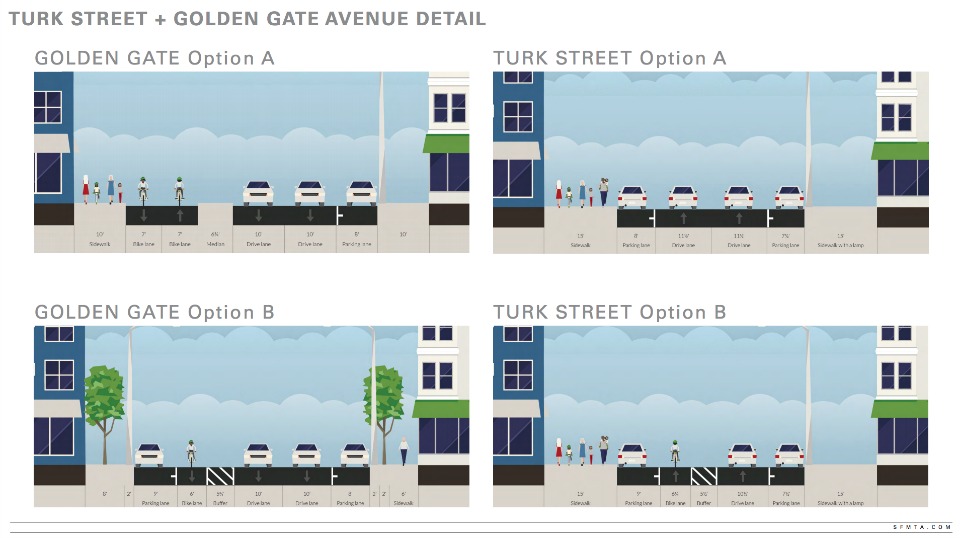 In Golden Gate Option A, a "road diet" would be enforced, reducing the street's lanes from three to two. That would reduce vehicle speeds, and allow for a two-way protected bike lane to be installed. However, one parking lane would have to be removed.

Golden Gate Option B would again reduce lanes from three to two, but only a one-way bike lane would be installed. All existing parking would be maintained.

For Turk Street, Option A would maintain the existing two lanes, but create continental crosswalks to increase pedestrian visibility. Option B is more drastic, reducing lanes from two to one to add a buffered bike lane. In both scenarios, current parking would be maintained.

Laguna From Eddy To Golden Gate

Laguna Street between Eddy and Golden Gate was another stretch where community members requested changes to reduce vehicle speeds. The idea of pedestrian bulbouts has been proposed, to increase crosswalk safety.

Changing the current parallel parking on Laguna to angled parking (Option A) could cut down on vehicle speeds. Option B would retain the current parking situation. 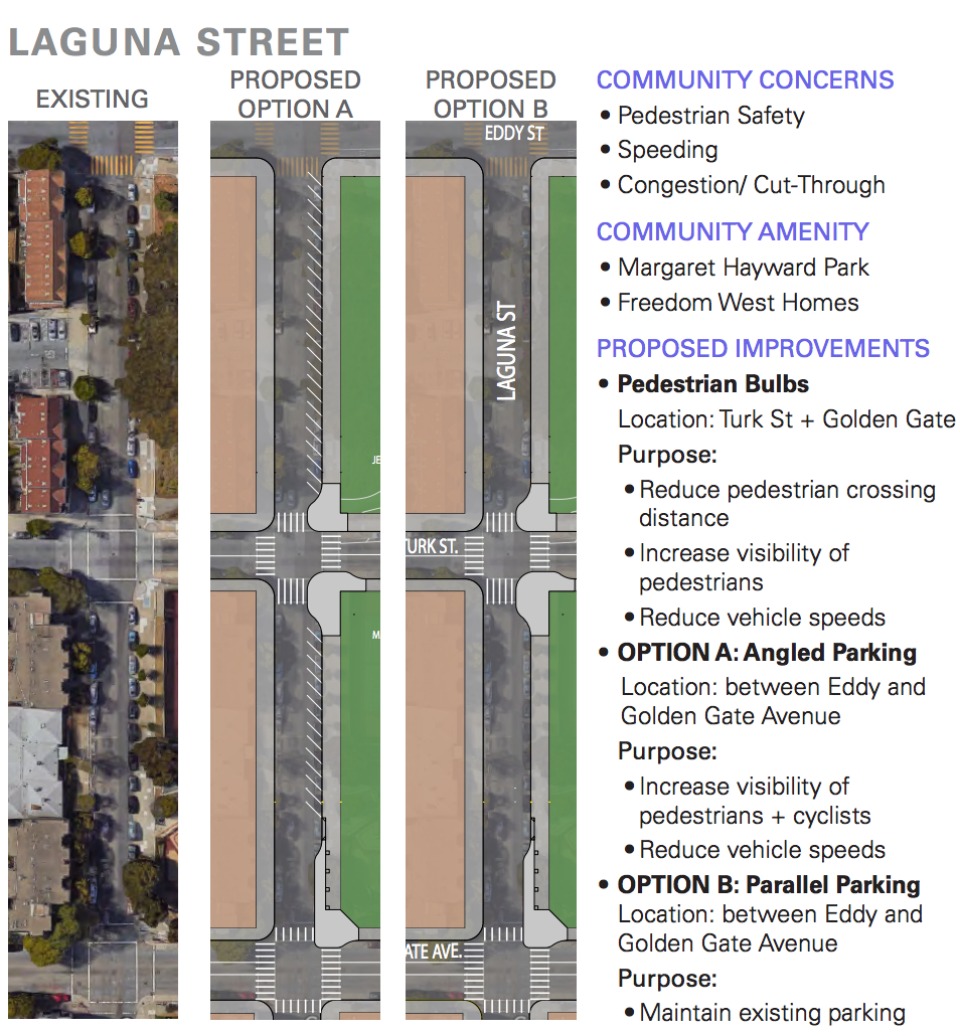 Buchanan From Turk To Golden Gate

The newly renovated Buchanan Street Mall will hopefully bring more people outdoors for recreation, but two intersections that cross through the Mall have been called out by neighbors as particularly dangerous: Turk and Golden Gate.

Some ideas floated by the SFMTA include a mid-block pedestrian bulb (called a "choker") that would slow down traffic, and increased visibility for pedestrians seeking to cross the street. For example, a rapid flashing beacon could be installed as an extra guide to vehicles that pedestrians are crossing. 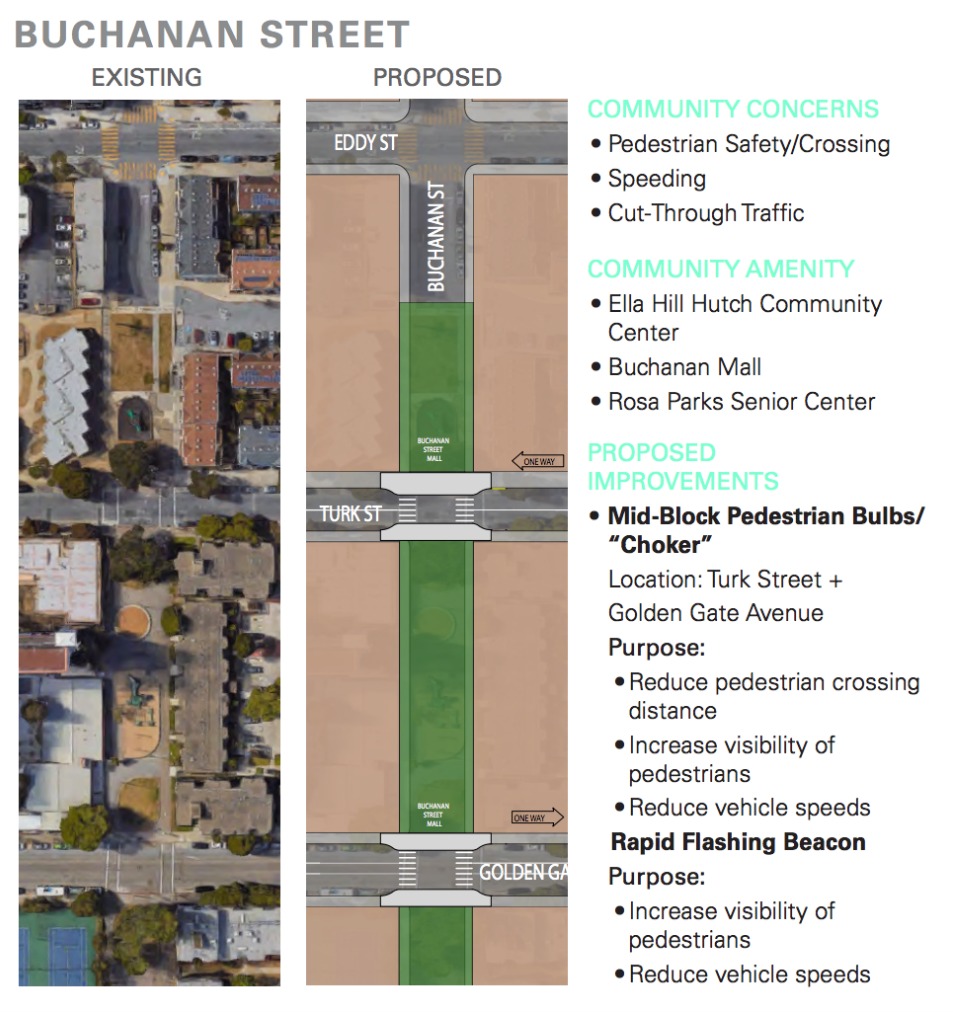 It's important to note that all of the above plans are still very much in progress, and no decisions have been made yet on which will move forward. Detailed slides covering the proposed changes should be uploaded to the Plan's website in the next few days.

We'll let you know when the next community meeting on the WACBT takes place, and which changes to the Western Addition's streets end up being approved.