A new, high-rise office tower planned for downtown San Jose that puts environmental elements on display is expected to clear a major hurdle in just a few weeks. According to Mercury News, Park Habitat was supposed to get final approval this week but city staffers delayed the decision until November 3rd so the planning director could take a closer look at the ambitious proposal.

If approved, Park Habitat would stand 20 stories tall with 1.2 million square feet of space dedicated to offices. On the ground floor, you’ll find almost 12,000 square feet of restaurants and shops. It would be built on the property that currently houses the Parkside Hall on Park Avenue near Almaden Boulevard. According to the developer, more than 60,000 square feet of lower floor space will connect to the neighboring tech museum known as ‘The Tech Interactive’ which is undergoing an expansion.

Several features make this building stand out among the several others being built or proposed for downtown San Jose. The biggest reason is that it has small park-like settings integrated into the different floors of the structure, not just the outside. Developers Westbank and Urban Community are teaming up on the project. They say people will feel like they are working right next to nature, even several stories up, thanks to an open area that spans inside the tower from top to bottom. 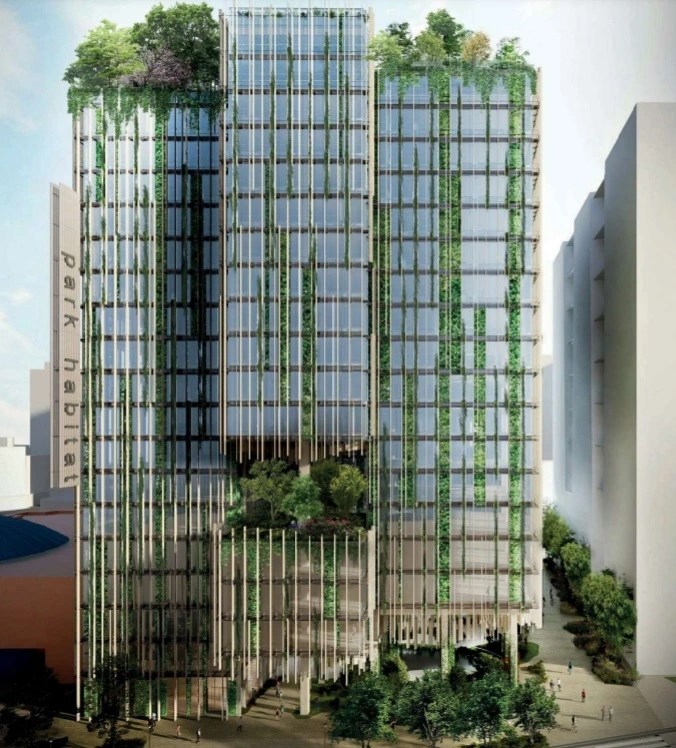 “The building design features a full-height courtyard which brings daylight and natural ventilation into the interior of the building. The building’s facade is softened using greenery and elevated landscaped terraces at differing levels on all building elevations. Park Habitat’s design takes inspiration from nature as well as the surrounding historic context,” city documents obtained by Mercury News state.

The developers hired Japanese design firm Kengo Kuma & Associates to come up with the concept. “What if we could work in a park? Our opportunity lies in reversal, from office park to ‘park office,’ putting nature into the building instead of the other way around,” the design firm wrote on Westbank’s website. Park Habitat is one of several projects that will shape a new San Jose skyline but it is not the first to features loads of natural features built into the structure. Hoodline reported on The Energy Hub in March which also has dedicated areas for natural elements.

City staffers are standing behind the project and are pushing San Jose’s planning director to give the project final approval on November 3rd. If Park Habitat does get pushed through, it’s unclear when construction would start or when it would be complete.