Sad news for a peregrine falcon that made his home on top of the huge Campanile at UC Berkeley and that had recently made a resilient recovery. Grinnell, the male bird, was found dead in downtown Berkeley Thursday afternoon where he was likely struck by a car while pursuing prey. The group that has been keeping a close eye on Grinnell, and his mate Annie as they hatched five broods of falcon chicks over the last five years, released the devastating news on social media.

Cal Falcons writes, “We are all deeply saddened to report that Grinnell was found dead in downtown Berkeley this afternoon. We are devastated and heartbroken.” Making the story even more heartbreaking is the fact that Annie had just laid a second egg just a few days ago in the next atop the Campanile. The group suspects that the eggs have little to no chance of hatching. 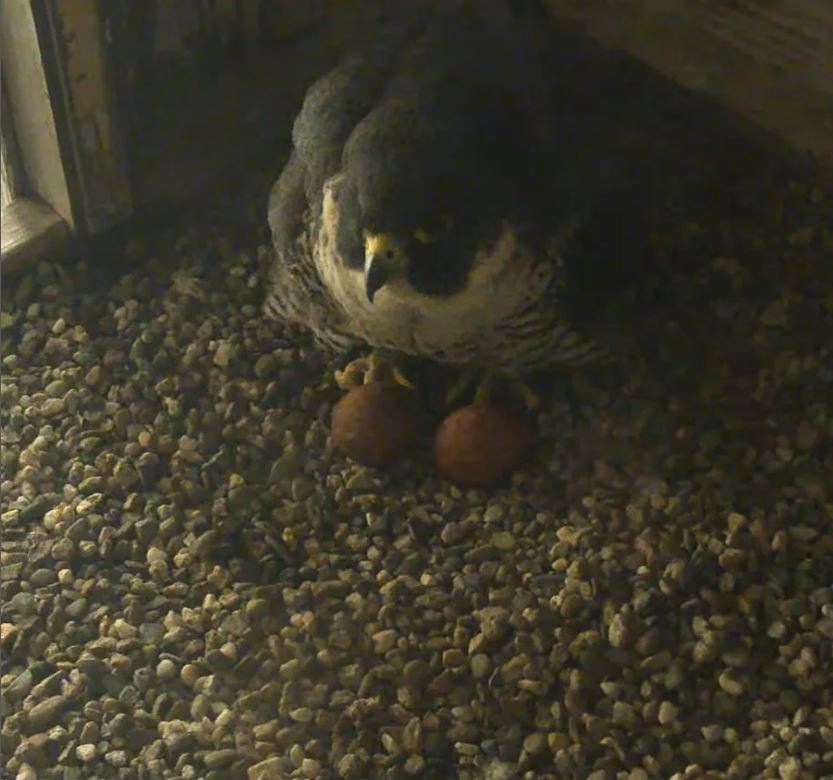 “Given the timing of this within the breeding season, it is doubtful that this nest will succeed with Annie alone,” Cal Falcon said on Instagram.

Annie and Grinnell had a fascinating and soap-opera-like love story, especially over the last year. Grinnell had been injured in October while protecting his nest from a rival falcon, and according to the East Bay Times, was sent to the Lindsay Wildlife Hospital in Walnut Creek for a few weeks before he was well enough to head back to the nest.

During that time, a lonely and vulnerable Annie was showing interest in other male falcons that showed up to court her, but she ended up sticking around with Grinnell. Everything seemed good at the nest for the next few months until Annie mysteriously took off for a week or so, as reported by SFist, leading many to believe she was either killed or decided to abandon the nest. Falcon fans were relieved when she finally came home.

Now, with Grinnell gone, Cal Falcon plans to keep an eye on Annie’s next move. The pair had recently been fending off other falcons that had come to scope out the nest. That could mean new falcons might run Annie out and take over the prime real estate at the Campanile. Meantime, Cal Falcon is promising to offer updates on Grinnell’s death while offering him a proper tribute. “As we learn more we will be sure to share with our community that has grown to love Grinnell over these past years. Over the next few days, we will write a more complete remembrance of Grinnell. As you can imagine, like all of you, we are in the process of digesting this incredibly difficult news.”