“For North Beach neighbors, it’s kind of a trek to get to the Mission and the Haight, so it’s great that there’s more vintage popping up around here,” she tells Hoodline. “The locals have been so sweet and supportive.”

Bodnar named her store after the punk band she was in as a teen. She also chose the name because it evokes a nostalgic mood.

“It’s about missing an era or a time period,” she explains.

Missing Audrey’s artfully designed interior exudes a groovy boho vibe. An eye-catching ribbon of stripes painted in bold shades of brown, rust, and yellow snakes along the top of one wall. Other decorative touches include a large, framed photo of a young Jefferson Airplane perched on a shelf among leather bags as well as posters from classic 60s films like Barbarella and Blow-Up. 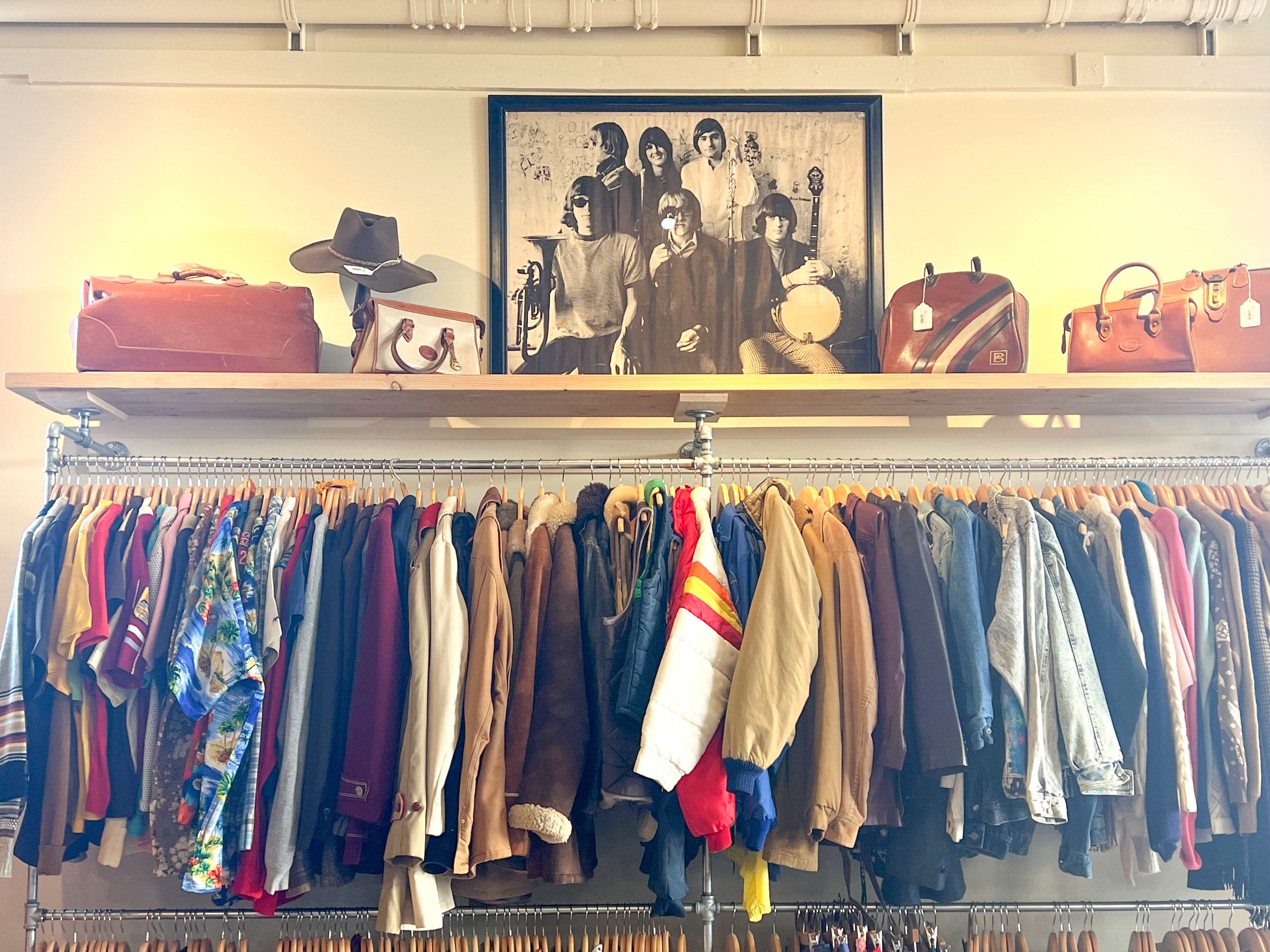 Bodnar has a soft spot for fashions from the 60s and 70s, but she also stocks a variety of pieces from other eras.

You’ll find some of those older garments among the silky, pastel-hued nightgowns and robes that fill a nook by the dressing room. The shop also boasts a solid assortment of rare vintage band tees. 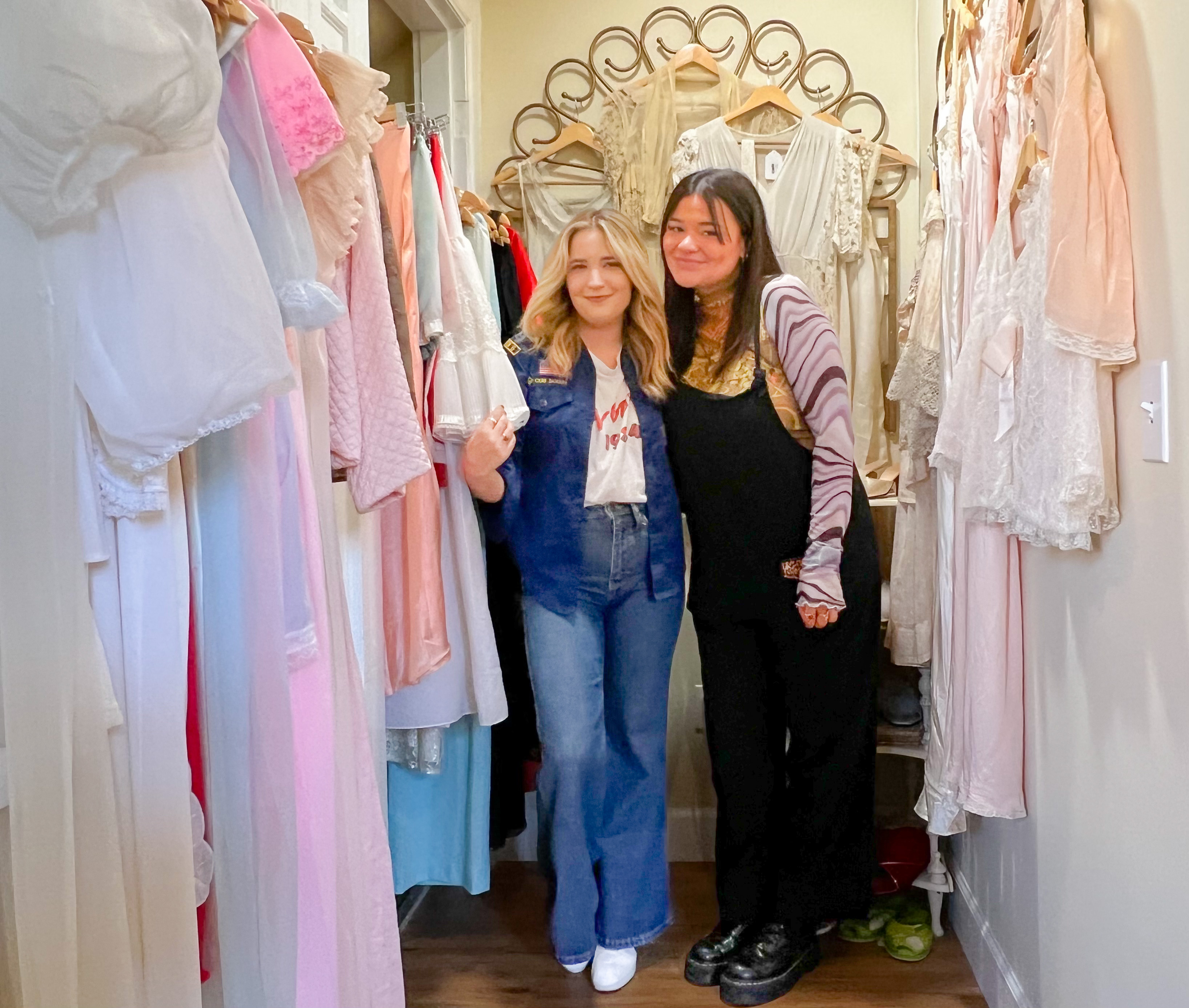 Just a few blocks away, a mix of sophisticated glamour and fun casual attire awaits at Via Margutta Vintage(1455 Grant Avenue). Buzz about the shop’s been building since it opened two months ago.

Owner Jason Galloway and his husband Victor Perez had a vintage store in Los Angeles until the pandemic forced them to close it. The couple decided to make a fresh start in San Francisco where they’d both lived before. 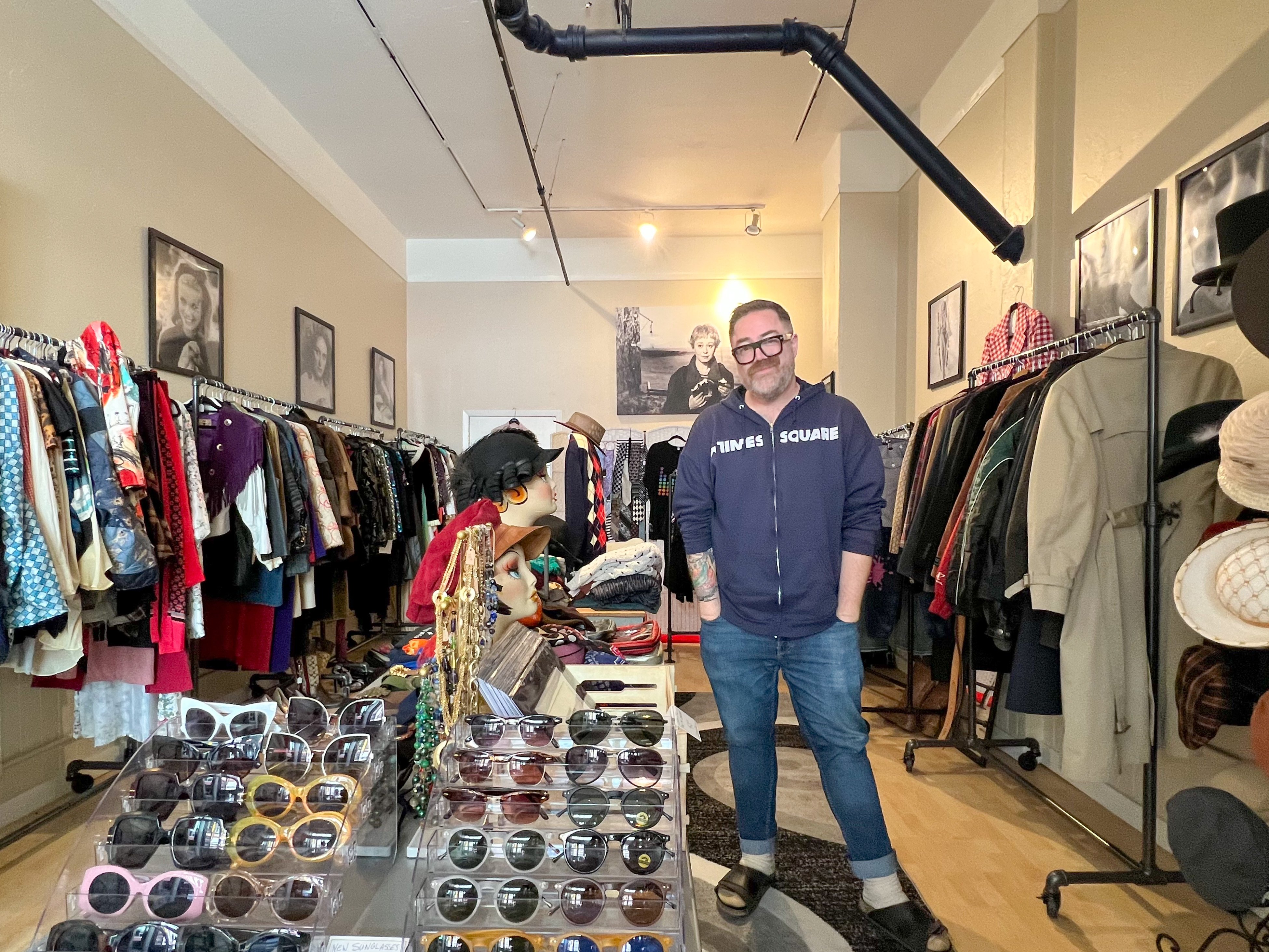 “We didn’t know if we were going to be able to re-open the shop, but rents in North Beach are pretty great right now,” remarks Galloway, who manages the store and purchases most of its inventory. “It was one of those things where you couldn’t say no. I’ve always loved Grant Avenue and the shops here. We thought that our shop would fit in perfectly with the vibe of North Beach. The response has been fantastic.”

Via Margutta’s old school Hollywood aesthetic reflects the couple’s passion for movies. (It’s named after the street in Rome where Italian director Frederico Fellini and his wife, actor Giulietta Masina, lived.) A large black and white photo of a gamine Masina graces the shop’s back wall. More images of film stars like Isabella Rossellini, Meryl Streep, and Fernando Lamas gaze at you from other walls. And it’s hard to miss the delightfully kitschy pink and turquoise painting of a cape-clad Elvis that greets you near the entrance. 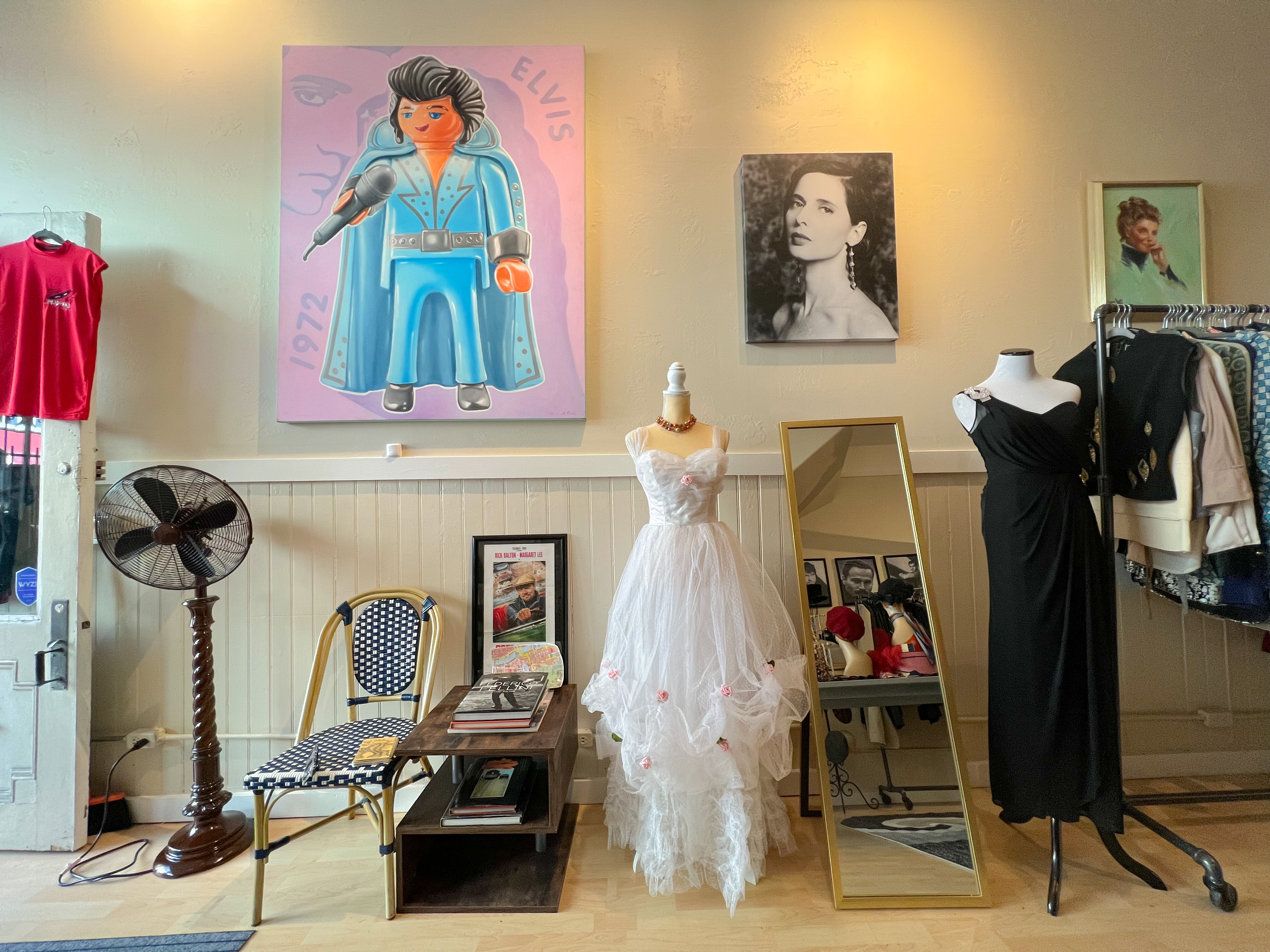 Fun and a touch of Hollywood glam co-exist at Via Margutta. | Photo credit: Dorothy O'Donnell

Galloway’s background in costume design helped spark his interest in vintage clothing and accessories. During his previous stint in San Francisco, he spent eight years as a librarian at the Fashion Institute of Design and Merchandising (FIDM) and took care of its costumes. He’s also worked in costume research for a TV show and carries costume-worthy garb at Via Margutta. 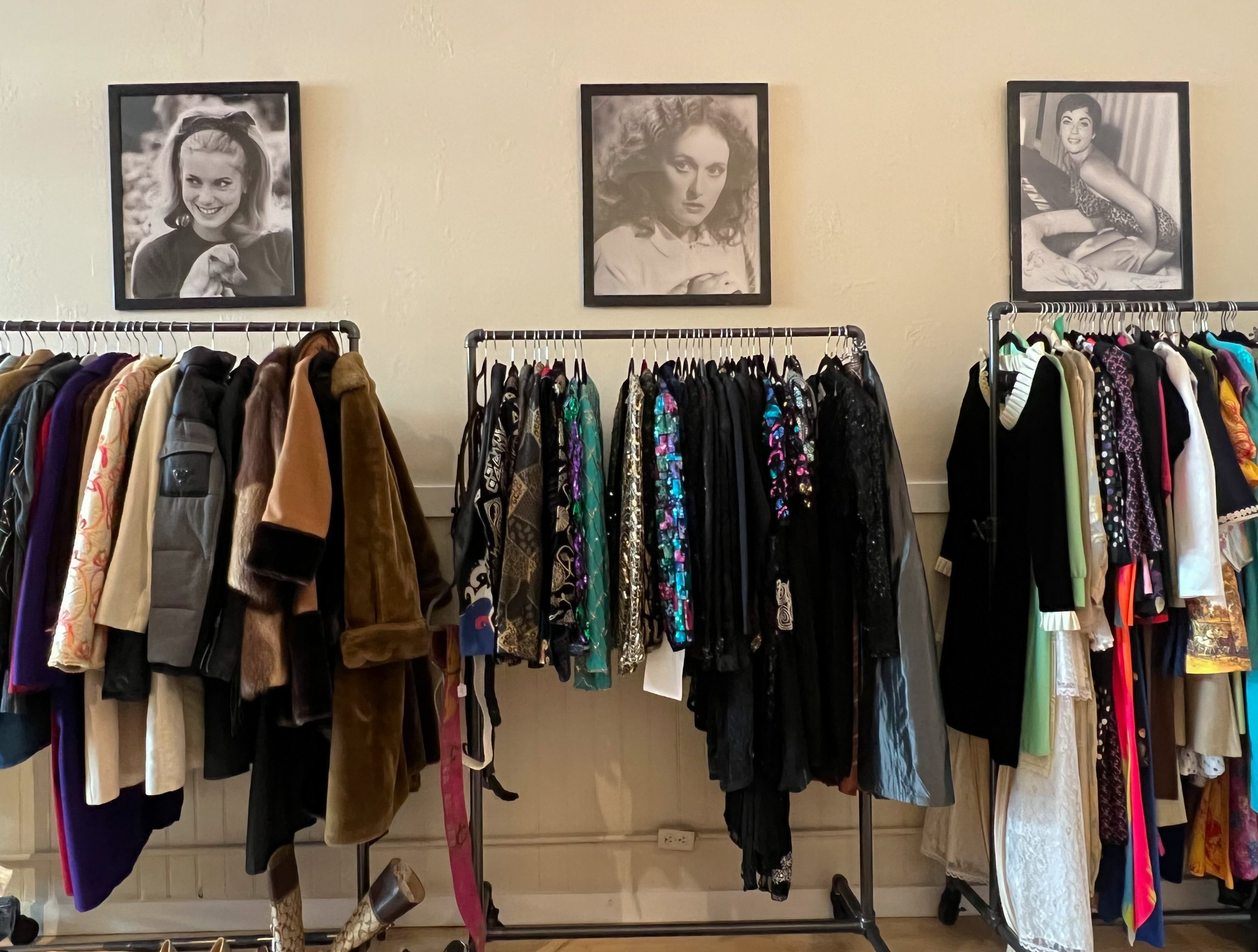 Classic designer pieces and other treasures fill the racks at Via Margutta. | Photo credit: Dorothy O'Donnell

According to Galloway, designer resale, such as classic pieces from Christian Dior and Carolina Herrera, are proving popular with his shoppers.

“I just sold the most beautiful La Mendola dress from the 70s,” he says. “But we also have $18 t-shirts and quite a few options for men. So we have a bit of something for everybody.”

He says he loves learning about the history of the pieces he curates for Via Margutta. And he loves hearing stories from customers who buy them. The woman who bought that La Mendola dress, for instance, shared that she was a contestant on Jeopardy and used some of her winnings to purchase it.

Of course, you don’t have to strike it rich on a game show to score your next vintage gem in North Beach. With three great shops that cater to a range of tastes and budgets, you’re bound to hit the jackpot.