On Monday, the San Francisco Small Business Commission considered a resolution in support of Another Planet Entertainment's proposed changes to the 100-year-old Castro Theatre.

After hearing from an overwhelming number of in-person and virtual public commenters who voiced their opposition to the resolution, the commission voted unanimously 6-0 to continue the resolution to a later date.

According to commission president Sharky Laguana, APE was invited to provide a presentation about its proposed changes. Many of the commissioners stated this was the first time that they had heard of the conflicts surrounding the changes to the Castro Theatre. 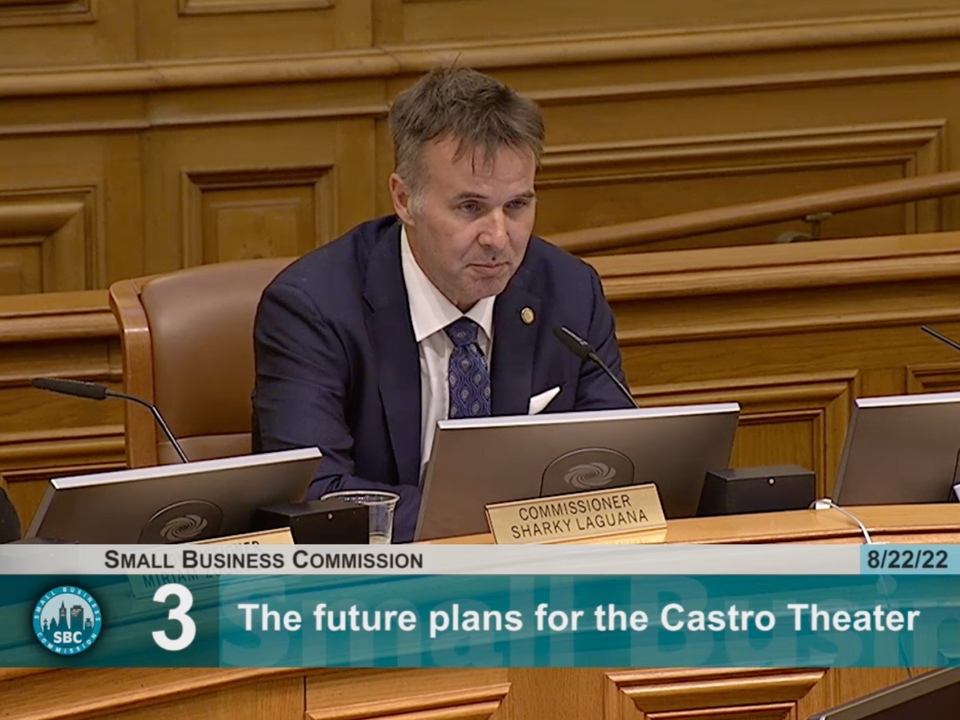 Ahead of the presentation, Laguana addressed criticism the commission received via email leading up to the meeting. "Before we begin, I'd like to turn the temperature down," said Laguana.

The commission was set to discuss a draft version of a "Resolution in Support of Another Planet Entertainment."

"Whereas, Renovations that maximize the space and expand usage of the Castro Theatre while maintaining its historical features are vital to its long term financial stability; now, therefore," the resolution read in part. 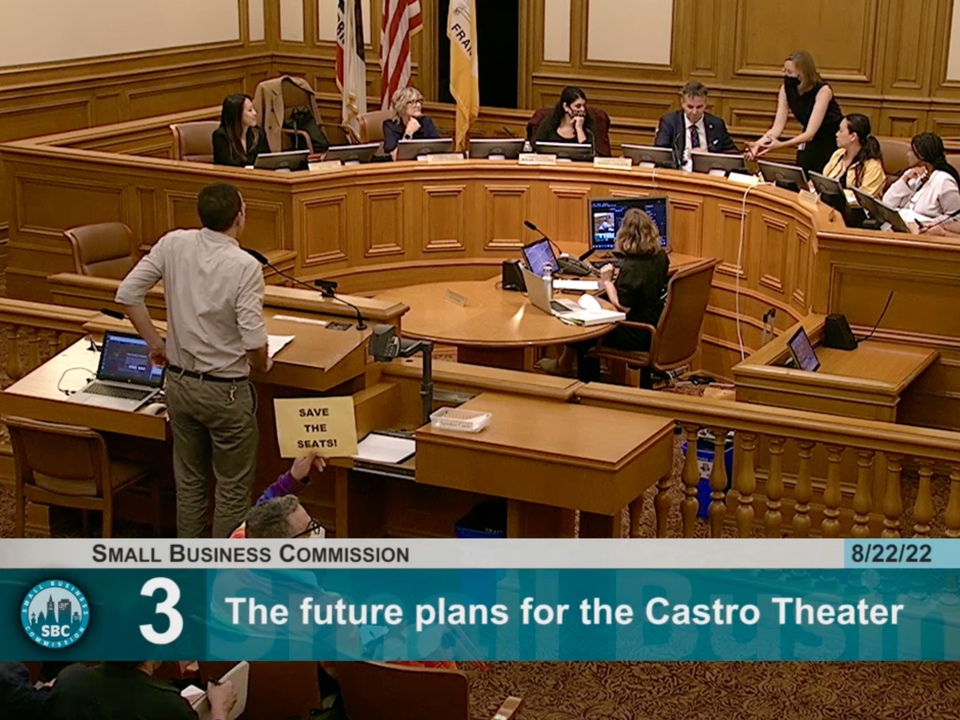 Public speakers also criticized APE for its lack of transparency and for not announcing the commission hearing at its August 11 Town Hall. Many public speakers stated they had only heard about the hearing three days before thanks to a city employee who tipped them off.

"I still don't understand why this is in front of our commission right now," said Commissioner William Ortiz-Cartagena.

"I'm going to take ownership of why this is on our agenda. This particular building has a particularly large impact on the small business community in the Castro, which had been suffering even before the pandemic," said Laguana. Laguana cited Castro's 37% storefront vacancy and 50% drop in sales tax revenue.

In attendance for the presentation were APE senior vice president Mary Conde, APE vice president of business affairs Dan Serot, and assistant general manager Casey Lowdermilk. APE CEO and co-founder Greg Perloff and the Nasser Family were not in attendance.

APE's presentation began with a brief introduction followed by a 13-minute video about the Castro Theatre's challenges and renovation plans.

A rendering of the proposed standing-room floor plan. | Image: Another Planet Entertainment

During the hearing, Serot admitted that APE was not fully prepared for the public backlash when it announced it would be taking over management of the historic theatre.

"Unfortunately for us, we didn't look at this as a community center. Instead, as a business venture," said Serot.

In response to APE's presentation, Laguana said, "We need you to be successful... We need it to be here for hopefully hundreds of years in the future."

However, Laguana called on APE to perform more community outreach. "I'd like to see a bridge to the community and some real engagement with the community on these concerns," said Laguana. 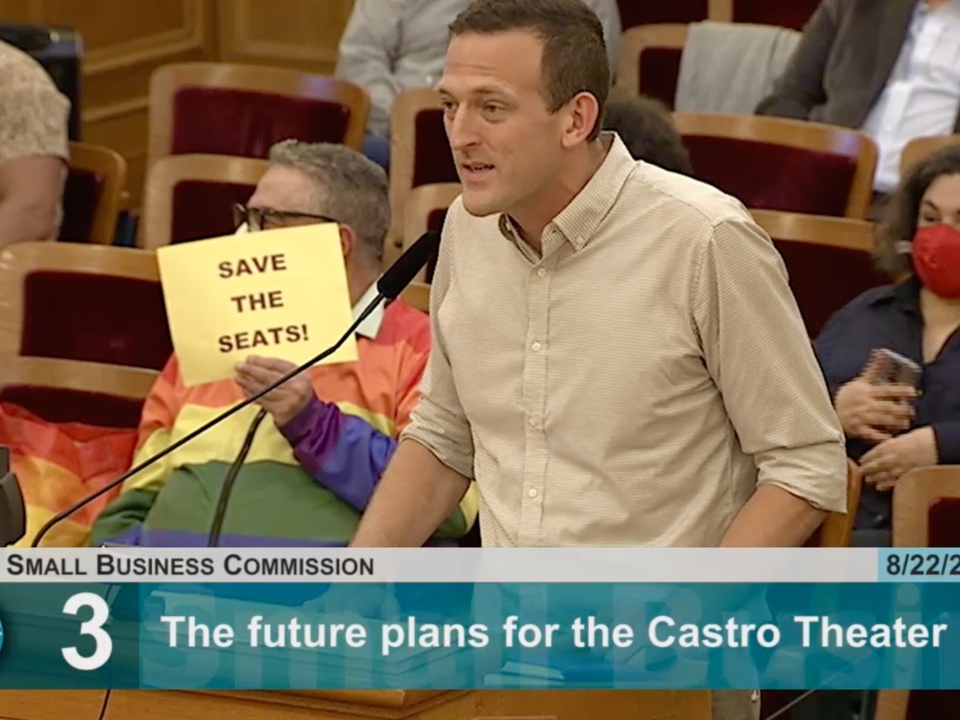 Commissioners heard from approximately 20 public speakers, all but two were critical of APE and urged the commission to withdraw or continue the resolution to a later date.

Initially, public comment was going to be limited to one minute per speaker, but after protestation from activist Michael Petrelis, Laguana agreed to two minutes per person.

Many of the public speakers decried APE's plans to remove the orchestra-level seating. At the hearing, APE shared they still had not decided what type of temporary seating they would install.

In order to make removal and installation of the seats easier, APE stated that the seats would be stored on-site in a new room built in the rear of the theatre in a former boiler room.

Queer public historian Gerard Koskovich shared his concerns about the proposed changes and the impact they would have on the LGBTQ+ community and culture.

"The classic cinema seating in the Castro theatre is not incidental, it's not random, it's not insignificant," said Koskovich. "It's what's defined by preservationists as a defining characteristic of this space."

"It's what tells you this a movie theatre," added Koskovich. "It's a crucial thing for the Historic Preservation Commission and the Planning Commission to address before this commission makes any consideration." 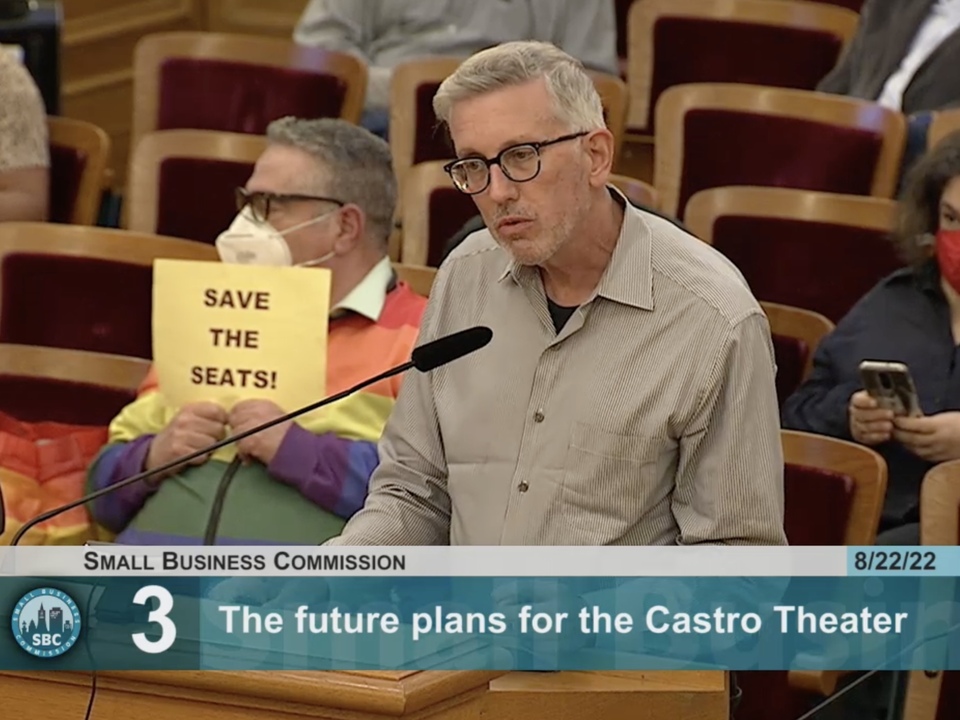 "When I hear APE talking about bringing in a 'new demographic' or a 'certain demographic,' I know what they mean by that," said Koskovich. "They mean a lot of rock concerts with straight people who will be getting drunk at their concerts and 1,400 of them will be pouring out onto the streets of the Castro."

Koscovich asked what effects that will have not just on the small businesses nearby but on the culture of the Castro.

Many commenters also questioned whether or not the Berkeley-based APE is even considered a small business or a San Francisco business.

In response, Laguana stated that the city administrative code defines APE as a small business with 100 or fewer employees.

Castro Merchants president Dave Karraker called in to urge the commission to "not make this an all or nothing proposition."

"I want you to understand this is not about a single business or building," Karraker said. "It's about all the businesses in the Castro. It will help these businesses survive. The Castro needs the Castro Theatre to be successful."

The San Francisco Historic Preservation Commission is scheduled to discuss this proposal on Wednesday, October 5. At that time, the panel will also hear District 8 Supervisor Rafael Mandelman's proposal to expand the landmark designation for the theatre, which would include the existing, orchestra-style seating.

The following day, the Planning Commission will hold a hearing on the proposed zoning changes that would allow APE to bring in live entertainment.