The mural restoration work kicked off in June and was completed last week.

As Hoodline previously reported, the mural was defaced by graffiti last year, and the restoration of the mural was uncertain at that time. 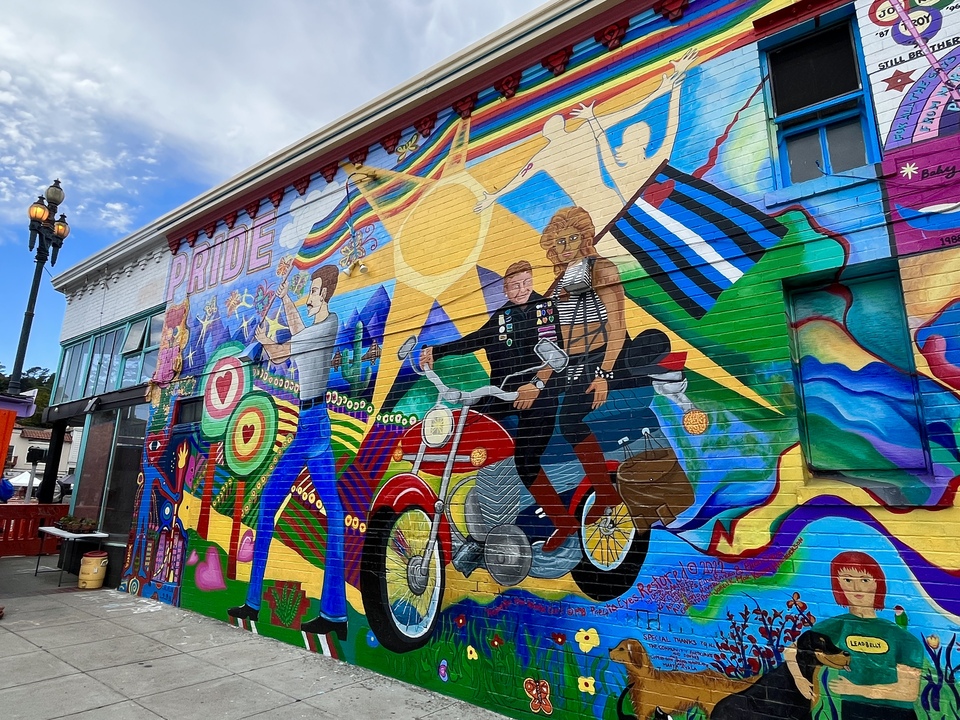 The mural restoration has been completed. | Photo: Steven Bracco/Hoodline

The Hope for the World Cure was painted on the back wall of what was then Bagdad Café (2295 Market) and most recently Castro Republic. The Castro Republic space has sat vacant since 2020 and the adjoining retail space, once occupied by Harvest Ranch Market (2285 Market), has been vacant since 2018.

The community mural workshop was a collaboration between Precita Eyes Muralists and Art From The Heart Heals, and was made possible through a grant from the San Francisco Arts Commission. 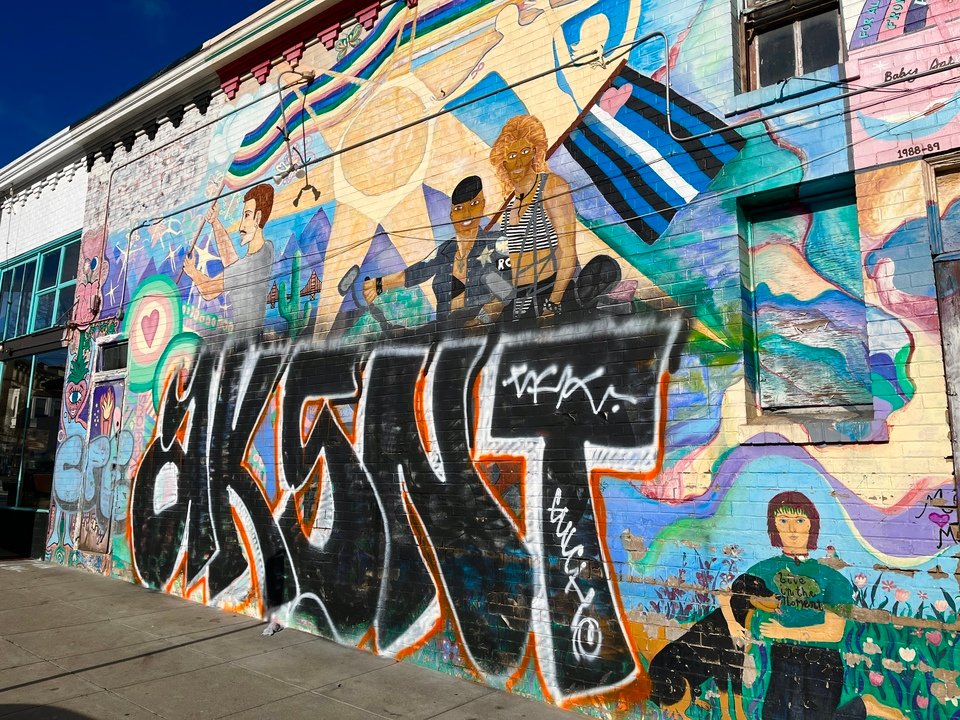 The mural was defaced with graffiti in December 2021. | Photo: Steven Bracco/Hoodline

Susan Cervantes, founder and executive director of Precita Eye Muralists, tells Hoodline the restoration team was made up of seven core artists and approximately 12 neighborhood volunteers. The team included a handful of artists that were on the original team when the mural was first painted in 1998.

"It's a special restoration because of the team we had working it," said Cervantes. "To have the community be able to have the opportunity to work on it in the same spirit the mural was done in was special."

"I'm excited to see the mural fully restored, and grateful to Susan Cervantes, everyone at Precita Eyes who worked on the restoration, and everyone who donated to support this project," said District 8 Supervisor Rafael Mandelman.

"We hope the restoration of this mural will represent a turning point for the neighborhood, while continuing to honor the meaning and emotions behind its colorful imagery for decades to come," added Mandelman. 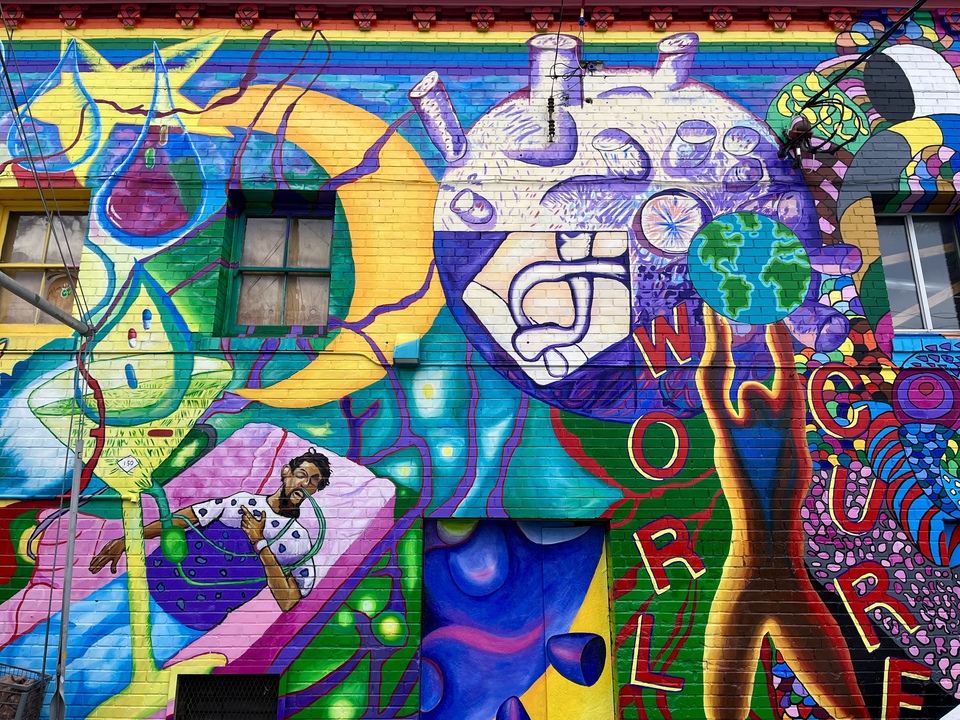 The restoration team started by cleaning the entire wall looking for cracks and loose paint. "It was really in good shape on the upper levels," said Cervantes. Cervantes said some lead abatement work needed to be done on a small section of the mural.

The mural was then sealed with a clear varnish to bring out the original colors, protect the mural from UV light and pollutants, and a graffiti shield that should last decades. Artist then used highly pigmented acrylic paint to repaint the mural.

"We restored it with that because it's the best available," said Cervantes.

While the majority of the mural was restored to its original form, a few new elements were added. 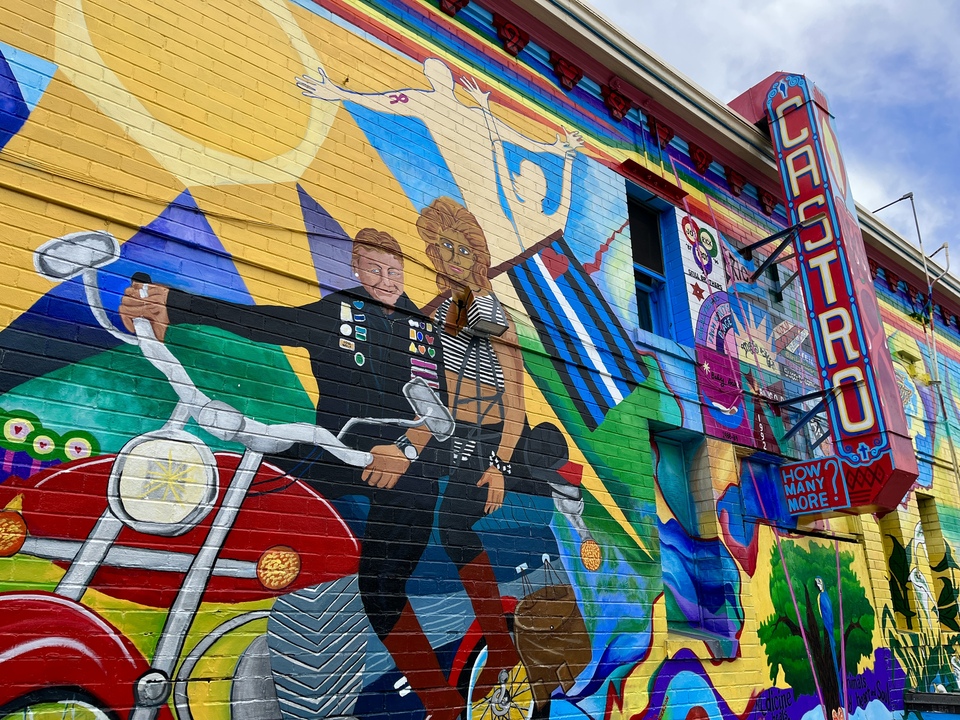 A portrait of Dykes on Bikes founding member Soni Wolf was added to the mural. "She passed away in 2018 and we wanted to honor her," said Cervantes.

On the top left of the mural, a bright pink 'Pride' sign was added to the wall on what was once covered by the previous restaurants.

Finally, a large butterfly to the right of the Castro marquee that had previously been painted blue was repainted as a rainbow butterfly. 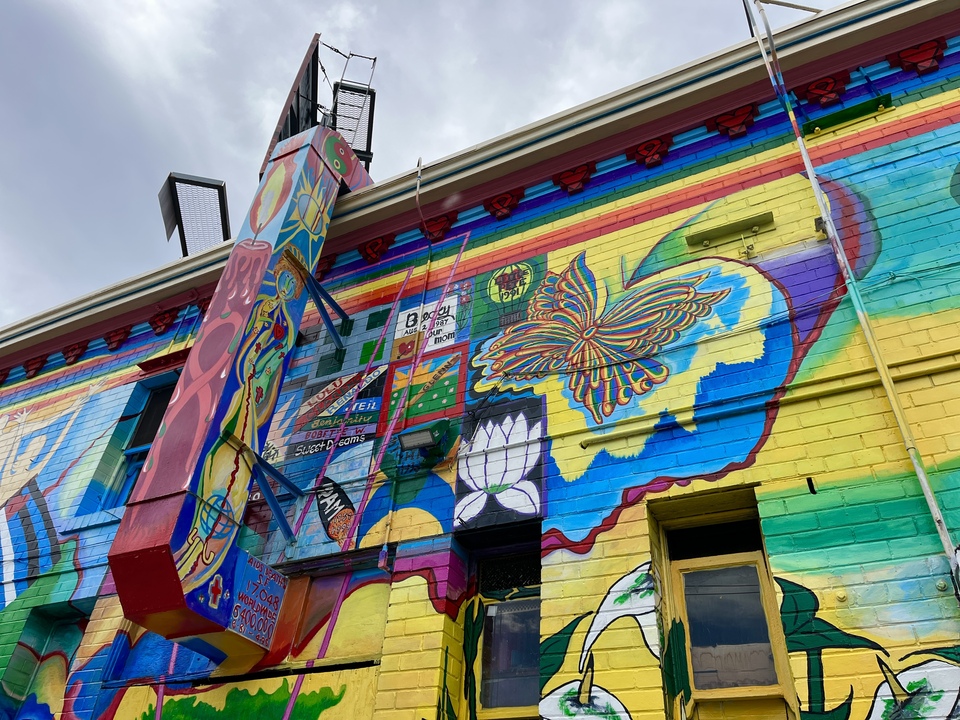 Supervisor Mandelman had been working to get a derelict trash enclosure that was obscuring the mural removed in time for the restoration but Cervantes tells Hoodline that the process is still ongoing.

Last night, the Board of Appeals (BOA)voted unanimously to uphold the Department of Public Works order revoking the Minor Sidewalk Encroachment Permit. "This decision came following unanimous testimony from neighboring residents in support of upholding the permit revocation, and a pattern of clear negligence on behalf of the property owner, whose representative did not both to submit a brief alongside their appeal," said Mandelman. 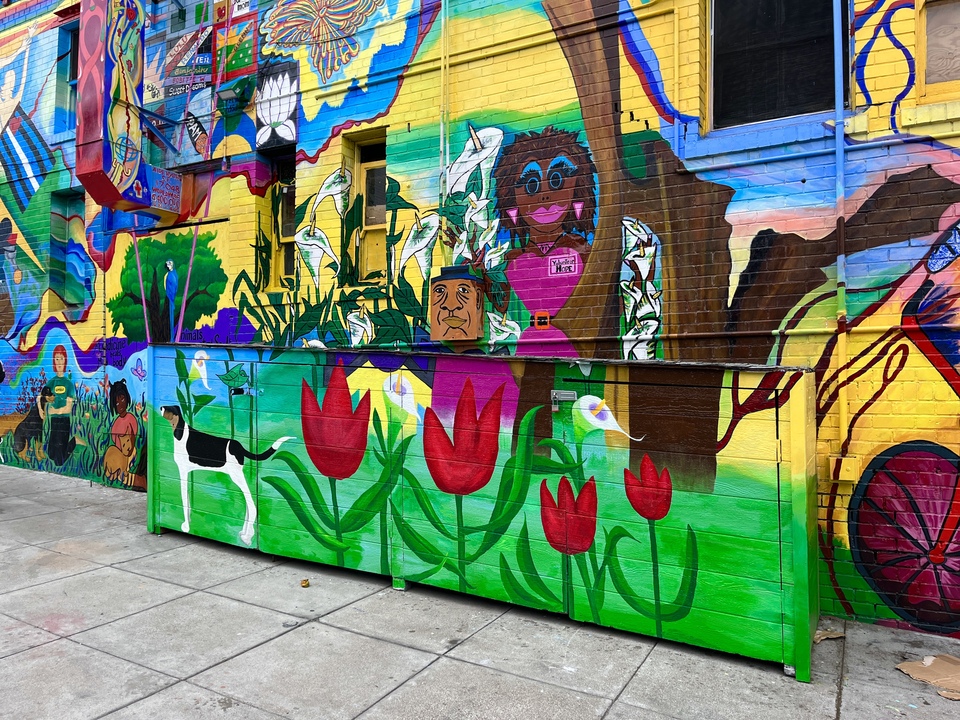 The Board of Appeals voted last night for the enclosure's removal. | Photo: Steven Bracco/Hoodline

At this time it is not clear when the trash enclosure will be removed. According to a Public Works representative, "the appellant has until Monday, August 29th at 4:30 pm to request a rehearing." "If BOA doesn’t receive a request by that time, then they will issue a written decision to be issued on Tuesday, August 30, 2022. Public Works will be able to move forward at that time."

Instead of leaving the trash enclosure blank, Cervantes said they incorporated it into the mural. "It blends in pretty nicely," said Cervantes.

Should the enclosure be removed sometime in the future, the artistic team will come back out and repaint the mural portion behind it.

The enclosure has also facilitated a number of encampments in the area and has been problematic for years. They became more entrenched during shelter-in-place. Neighbors' longstanding concerns about noise, drug dealing, trash, and human waste intensified further after a homeless man nearly burned to death at the intersection two years ago. 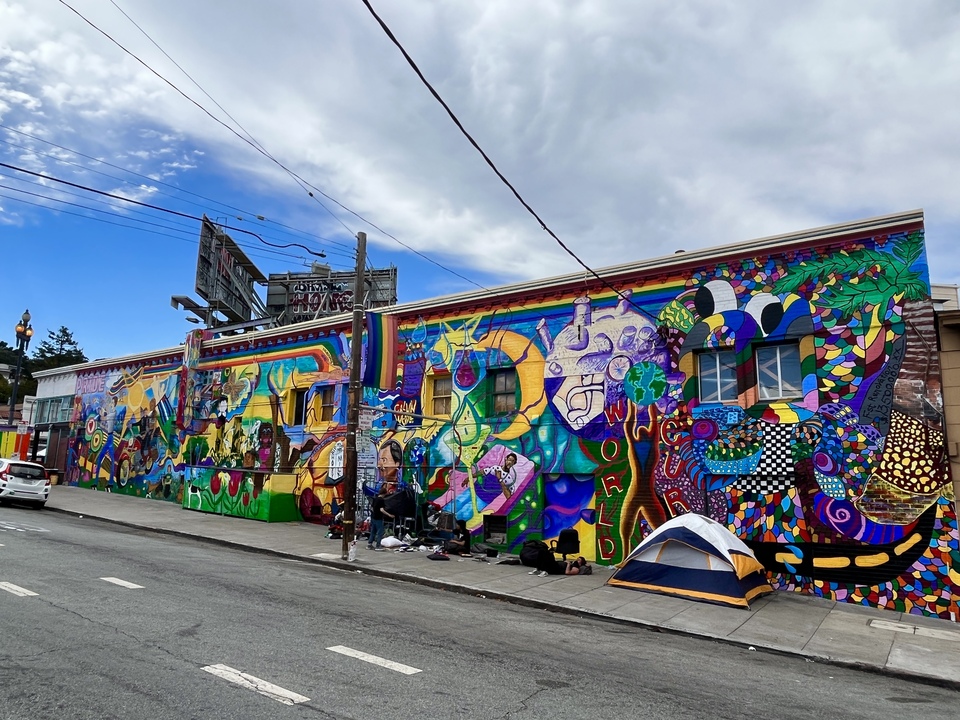 When a Hoodline reporter visited the site this week, an encampment was already established. Hoodline reached out to Mandelman's office for comment but did not immediately receive a response.

"Our office does work to escalate these issues with the various responsible departments on a regular basis, though we are often disappointed to find that even after substantial interventions, people frequently return to the same spots and engage in the same unsafe behavior," said Mandelman.

"This is why we put so much work into A Place for All, and plan to push hard for full implementation of shelter for all following the release of HSH's implementation report at the end of the year," added Mandelman. 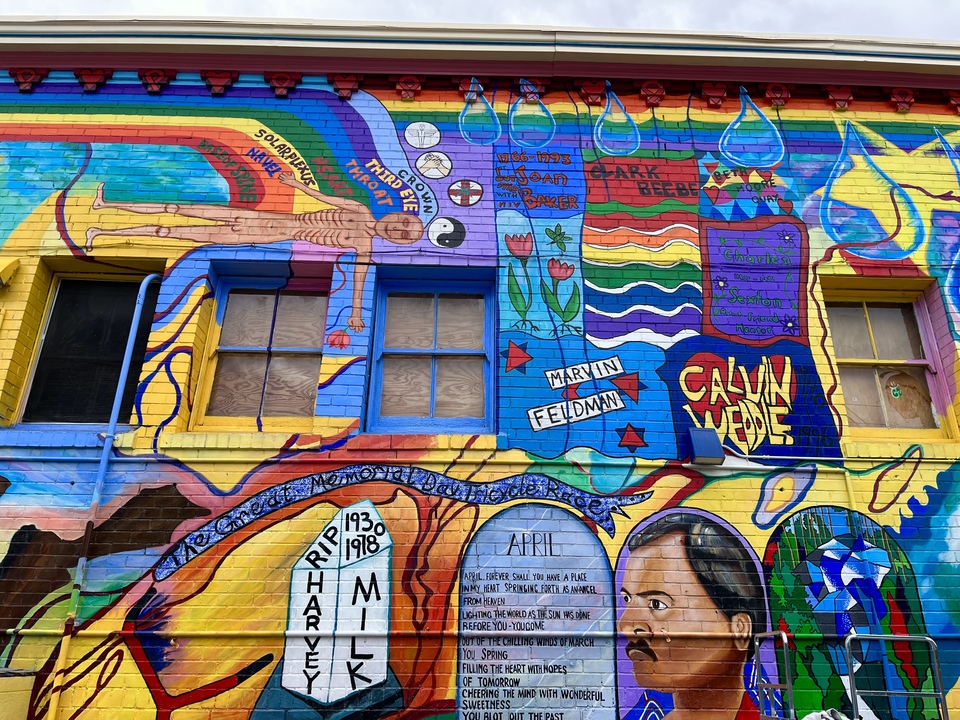 Cervantes tells Hoodline that the mural restoration work cost $50,000 and was mostly funded through anonymous private donations. A GoFundMe page started back in May raised $3,950 but was quickly taken down after the private donations were received.

"It's a wonderful feeling to complete the mural restoration," said Cervantes. Throughout the restoration process, Cervantes said many passersby showed their support and appreciation. Some even handed over donations while driving by in their cars.

"A lot of people who had seen the mural created in 1998 are still in the neighborhood," added Cervantes. "They were just super excited and appreciative."