Art, Cocktails, Music and More: Getting to Know Madrone

By Lara Oliva - Published on June 14, 2012.
San FranciscoDivisadero
Passing by on Fell Street, you might notice the Victorian with the original stained glass windows that for decades housed a neighborhood pharmacy. Located on the corner of Fell and Divisadero is what appears, at least from the outside, to be a typical San Francisco bar. What lives inside is something more. Madrone is a neighborhood bar, a dance scene, a local hangout, a destination for cocktail connoisseurs, a social meeting place, and a conceptual art gallery, all rolled into one. We sat down with Mike Krouse, known by many as "Spike," to discover the origin of this unique and charming locale.

A long-time Lower Haight resident, Mike came to San Francisco from Las Vegas to make art. He studied painting at the San Francisco Art Institute, bartending in his spare time to pay the bills. The experience motivated him to find a way to meld his two worlds together. Meanwhile, fellow artist Leila Fakouri opened Madrone Lounge in 2004, saving the space from becoming a Burger King (yes, 500 Divis could have been a Burger King). Her original idea was to establish an art-filled lounge that would encourage patrons to mingle, acting as something of an indoor town square. The concept appealed to Mike, who at the time was looking for a space of his own to execute a similar vision. Eventually Fakouri sold the bar to Mike, who changed its name to "Madrone Art Bar" and quickly began bringing a new sensibility to the space.

"Leila showed student art. I wanted this to be more than that. People don't expect to see what's in here. They don't expect to walk in and see a Walker Evans. The art is meant to engage people. Why are museums and galleries the only measurement of what is good? This is a different way to appreciate and experience art. With 700 - 1000 patrons per week passing through this is also a huge opportunity for visibility." 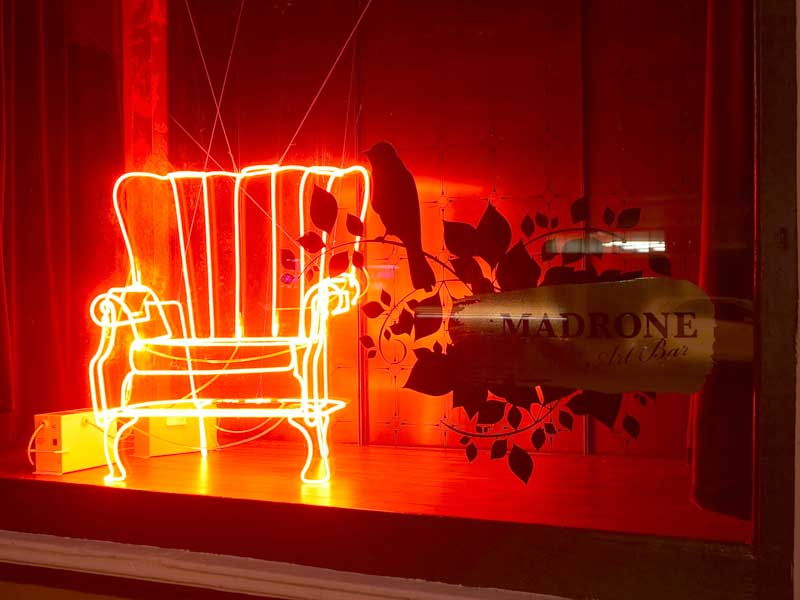 Installations in the front window give a hint of the kinds of pieces you'll find inside. While sipping on one of Madrone's signature cocktails, like the "Bonita Apple Bomb" (a tastebud-tingling combo of Bulleit, Punt e Mes, and bitters), your gaze might fall on the unique animal-weapon sculptures of Peter Gronquist, or the electrified installations of Dennis McNulty. 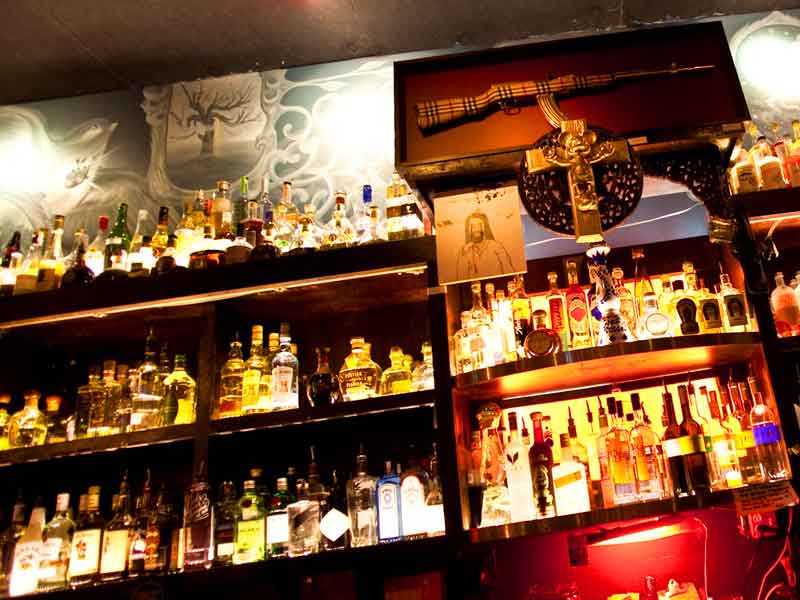 Emerging and unknown artists share space with the well-known. Patricia Templeton is one of Mike's many discoveries. He was walking down Polk Street one day and came across an older woman with a box of photographs. After conversing with her and examining her work, he discovered that she had been a photographer for the Chronicle in the 1950's. Mike offered her a show at Madrone.

As passionate as he is about art, Mike is also an ardent music lover -- and it's evident in Madrone's varying theme nights. Motown Night keeps "one foot in the past and one in the future," as he puts it. One regular Madrone musician, Oscar Myers, was a session musician with some of the biggest names in Motown before the Vietnam War. There are also DJ nights, and the "Prince and Michael Experience" dance party draws in huge crowds, its popularity reaching across the city. Madrone has proven itself a versatile space for the creative community. It's hosted everything from fine art film shoots to burlesque shows. Arts groups such as Root Division have held fundraising events there, and social groups use the space on a regular basis. It's become a hub for socializing, experimentation and freedom. 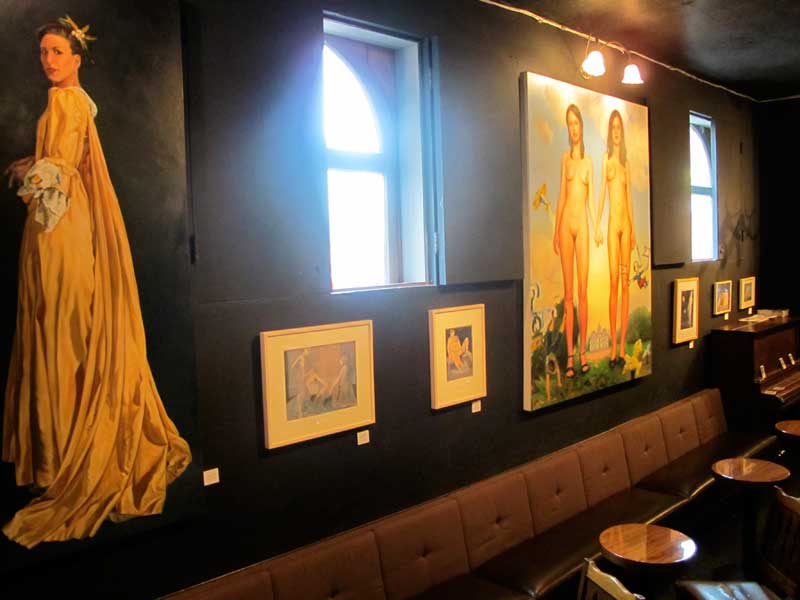 Mike doesn't collect a commission or charge for use of the space. On the contrary, he gladly provides stipends to some qualifying artists. With the development and cultivation of the Divisadero corridor, the neighborhood has become a destination point for San Francisco residents and outsiders alike. Mike notes an influx of foreign tourists who come to Madrone to enjoy pre-dinner cocktails, along with food aficionados from Palo Alto, Marin and the East Bay coming to dine at Nopa, Little Star, Ragazza, Bar Crudo, or any number of other nearby restaurants that have opened recently. As the area evolves, so does Madrone, including a new cocktail list that's rolling out soon. Try a "Lola" with cucumber vodka, ginger beer and lime, or the "Sopa" -- lavender-infused gin, with lemon, NOPA Honey, and Cava Float. These delicious new drinks are just another reason to bring a date, enjoy the music, and rub shoulders with the locals and a famous artist or two at Madrone. It's a unique pleasure in the Lower Haight / Divisadero corridor that keeps us mindful of how far our neighborhood has come in recent years, and where it might be going.
San FranciscoDivisadero
Jun 24, 2022