Before & After: Hayes Valley Over The Past 128 Years

Photo: Fell & Gough (1944)/SF History Center, SF Public Library
By Jared Schwartz - Published on March 18, 2014.
San FranciscoHayes Valley
Ready to geek out with us?
While we love discussing and sharing the day-to-day action going on in Hayes Valley (did someone say a restaurant is opening?), we kinda secretly enjoy living in the past too.

San Francisco's history goes back a few centuries, and while Hayes Valley was just outside the original city limits, it quickly became a destination spot for locals (via steam railroad) and eventually the home of Mayor James Van Ness (1855-1856) who built his house in our 'hood.

Because we dig up so much cool stuff at the SF History Center (check it out, they have amazing old maps that put the Anamaniacs to shame), we're going to occasionally write posts where we delve into the history of Hayes Valley ... and this is one of them!

Below you'll find two pictures of five intersections or landmarks in the neighborhood. The first picture will be from several decades (or centuries) ago and the second will be from this month.

Enjoy the trip in the wayback machine.

MARKET + BUCHANAN
While we could debate if this intersection belongs in Hayes Valley (is it the Lower Haight? Duboce Triangle? Mint Hill?), let's focus on what really matters: this block has been making the people who walk up it get sweaty for 90 years. The San Francisco Mint won't be built until 1937 (left side in old photo), but you can still make out the same apartment building in the top left corner. Linea, the new condo and retail unit on the right in the new photo, is gearing up for completion this year. 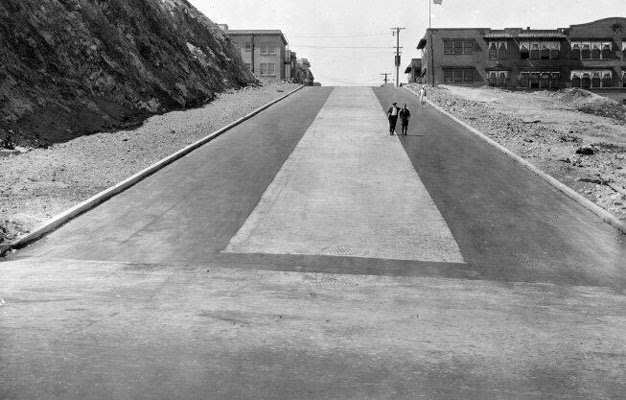 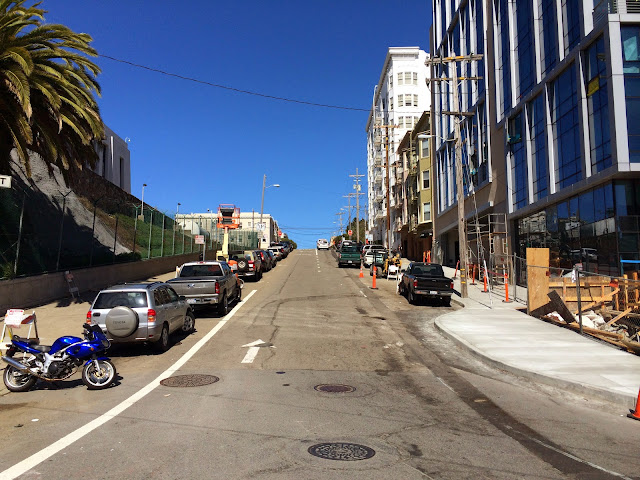 OCTAVIA + WALLER
The First Baptist Church of San Francisco was dedicated in 1849, making it one of the first protestant churches in California. It began as a one-room building at 878 Washington (near Portsmouth Square), and after a few moves, developed this building near Market Street in 1909. 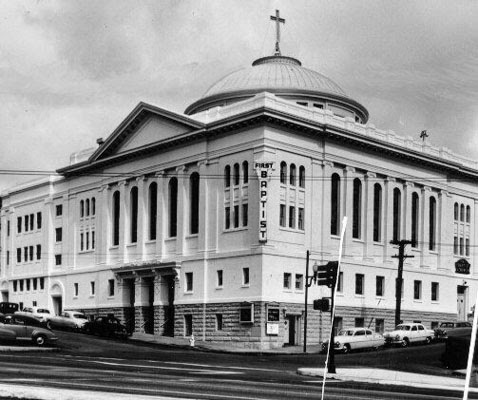 OCTAVIA + HAIGHT
If you're new to San Francisco, you might have no idea a double-decker freeway curved its way through Hayes Valley for almost 30 years. The Central Freeway, created in 1959 and closed/destroyed in stages between 1989 and 2005, was included in the 1948 Transportation Plan for San Francisco that designed a traffic loop around downtown. While the whole highway loop wasn't actualized, this massive concrete structure was the target of protests for years (Freeway Revolt). Its fate was sealed after the Loma Prieta earthquake destroyed parts of the elevated structure. 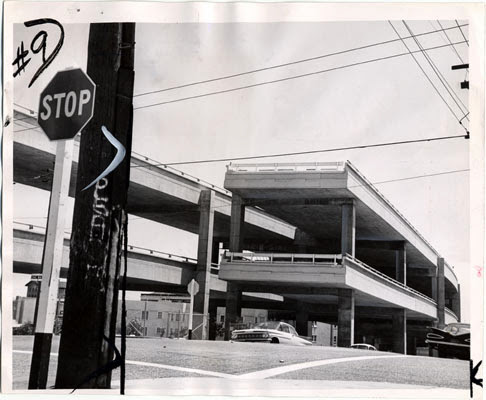 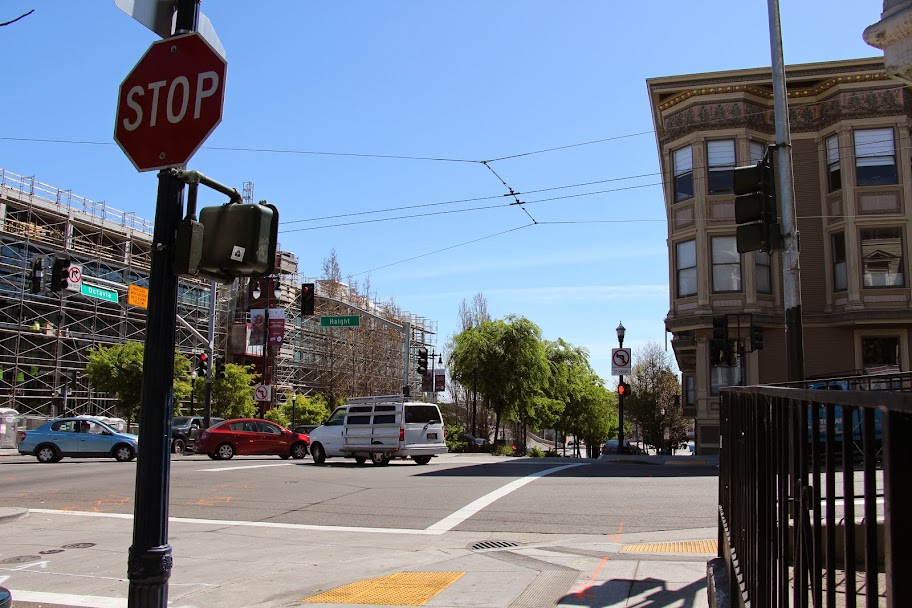 HAYES + OCTAVIA
Long before Patricia's Green and the Central Freeway, the corner of Octavia and Hayes was occupied by lots of dudes in caps chilling in front of Bank of America. We're not entirely certain of the date for this picture, but we're thinking somewhere in the 1930s (does anyone have a better guess?). 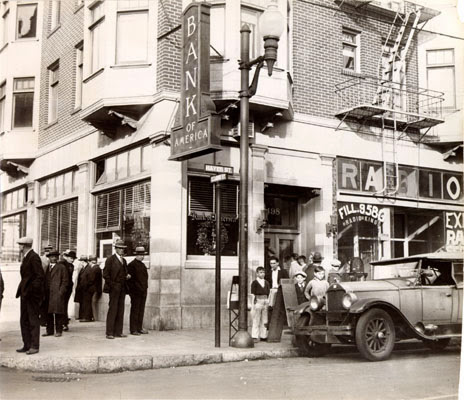 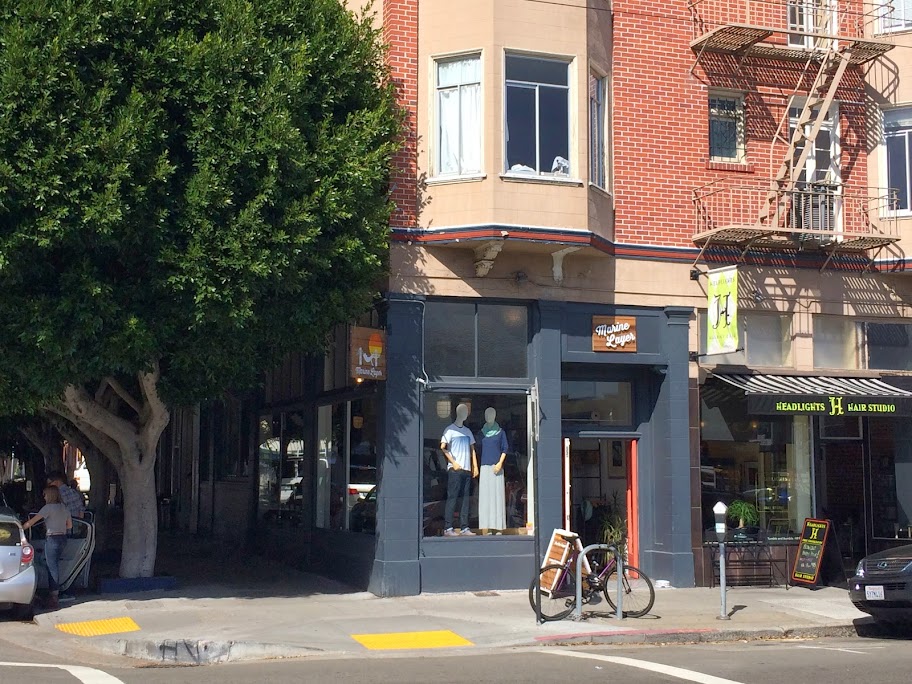 HAYES + BUCHANAN
Just like our girl Vanessa Williams once sang to us, we've saved the best for last. And it's a game-changer because you're getting three pictures. While looking at other photos of Buchanan Street, we noticed a giant spire that definitely does not exist in our current skyline. Turns out it was the Wesley Methodist Episcopal Church (or once called the Simpson Memorial Methodist Episcopal Church in 1886). According to the Hayes Valley Voice, it survived the 1906 earthquake, was abandoned by its congregation, became a practice spot for jazz musicians from the Fillmore, and was eventually destroyed in the 60s to make way for a playground. 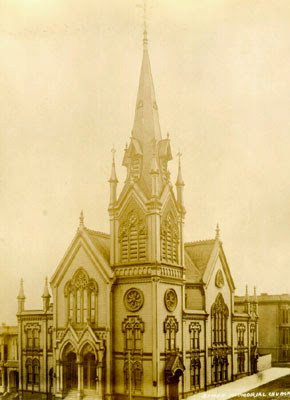 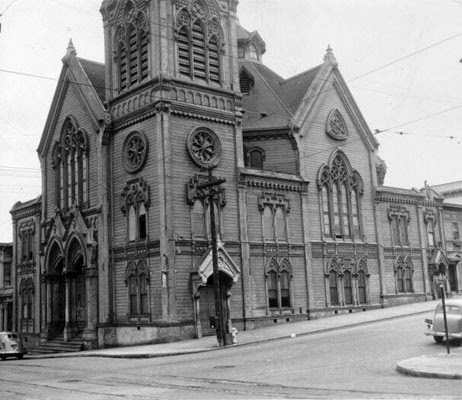 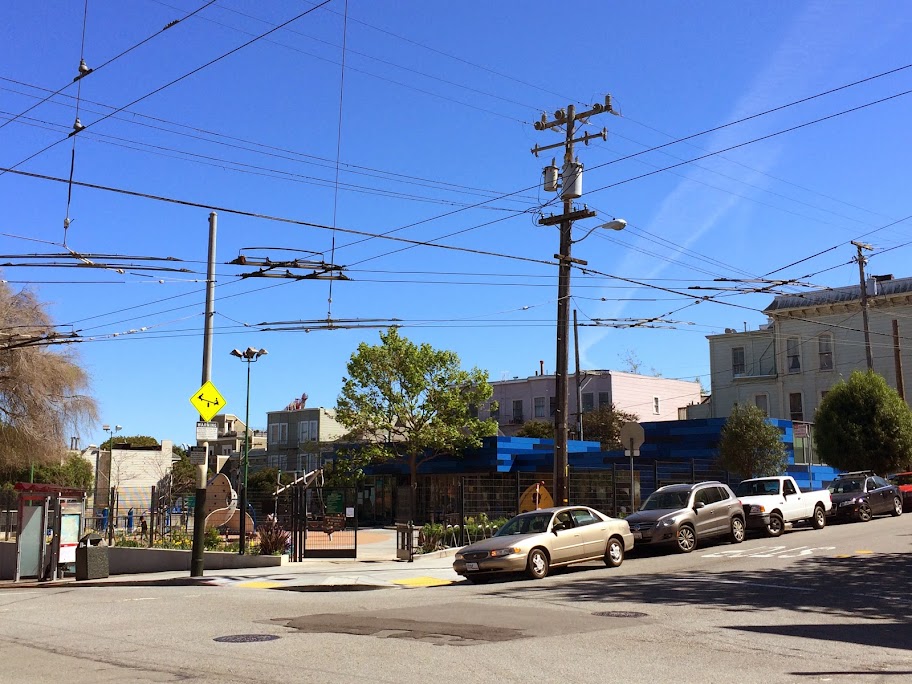 That's all we have for this installation of Before & After! Let us know if you're a fan or "just not that into it." But whatever you do, don't say we should post more and then never return our texts.

Hoodline
About 24 hours ago