A History Of Redlining In San Francisco Neighborhoods

Photo: blupics/Flickr
By Nuala Sawyer - Published on June 03, 2014.
San Francisco
Redlining is not an unfamiliar term for most urban areas across the country. Defined as the refusal of a loan to someone based on a neighborhood deemed a "poor financial risk,"  the term references the literal drawing of a red line on a map delineating where banks will and will not invest financial support. It's a word that was invented in the 1940s, but came to popularity in the 1960s during socialist activist movements.
Thanks to a recent Slate article and a tip from NDDivis, we tracked down a map that shows a particularly strong case of redlining that occurred in our very own city, all the way back in 1937.
During the Great Depression, it was common for homeowners to take out loans from banks in order to make ends meet. Seeing a massive upswing in loan requests, banks began drawing the line at certain demographics through redlining their neighborhoods. In 1935 The Federal Home Loan Bank Board asked Home Owners' Loan Corporation (HOLC) to look at 239 cities and create "residential security maps" using a colored grade to mark which neighborhoods were appropriate to invest in.
San Francisco was one of those 239 cities where low income families, immigrants, and residents of color were turned down for bank loans based on the neighborhoods they lived in.
Here's a copy of a map drawn in 1937 by the Home Owners' Loan Corporation: 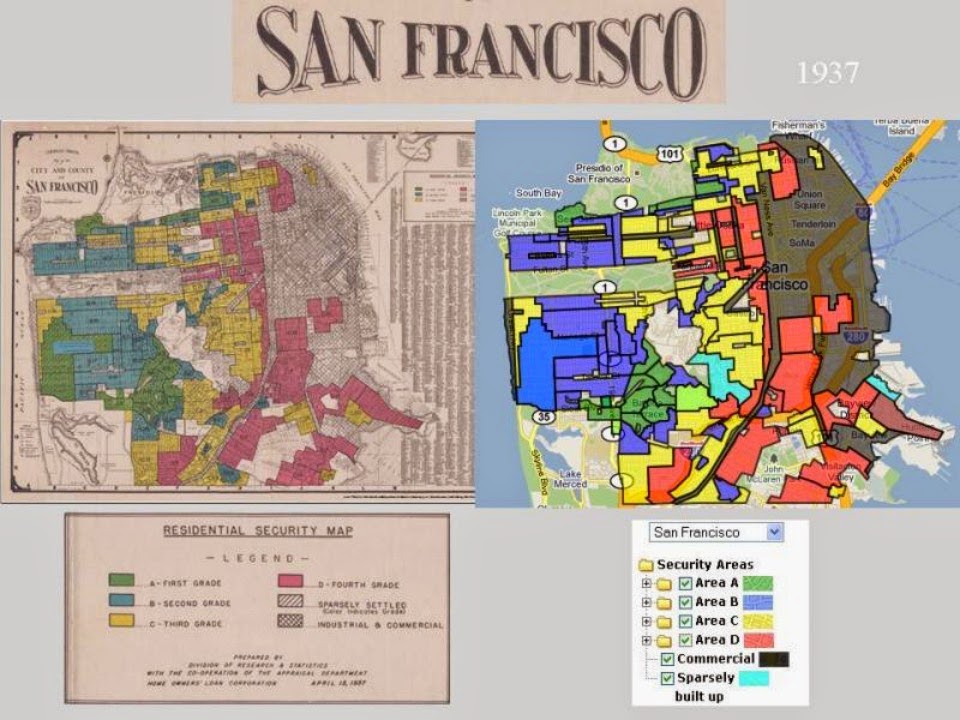 (Images by T-RACES)
Take a closer look at the color chart for each neighborhood: 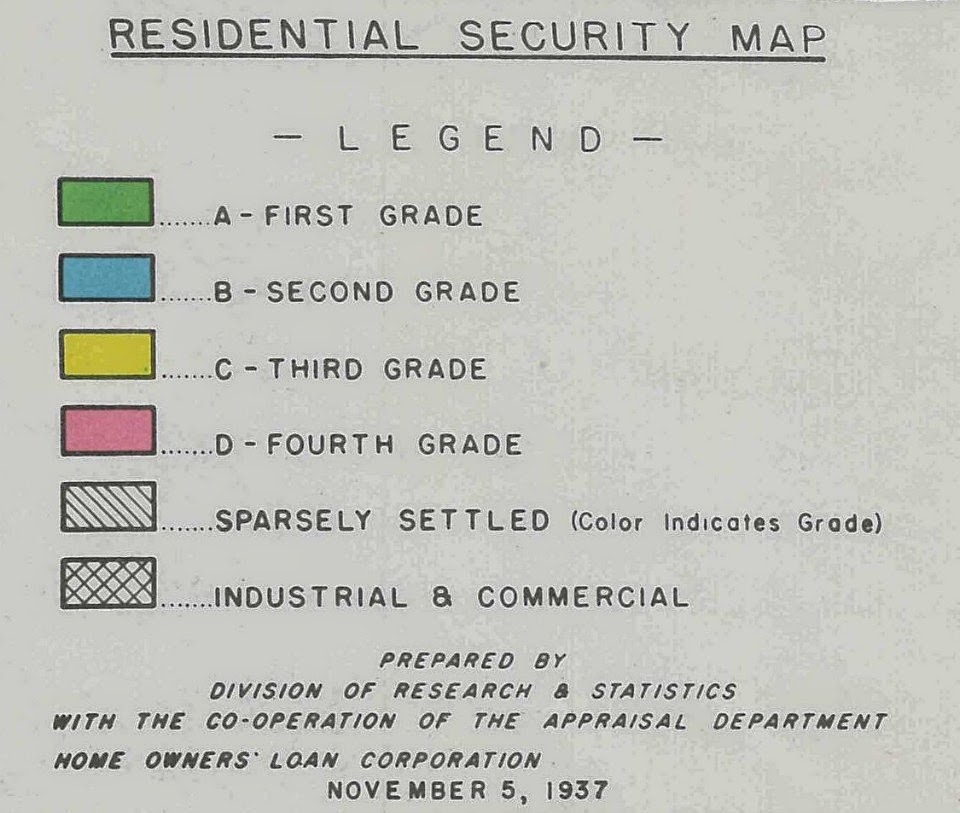 A shortened summary of the color guide states that:
As you can see, the red neighborhoods marked in the map make up Western Addition, the Haight, Chinatown, parts of the Mission, and a few other neighborhoods that at the time were occupied by a largely non-white population.
The issue of redlining became particularly poignant in the growth of San Francisco towards the mid-1900s. After World War II, San Francisco saw a boom in number of residents. Soldiers returning from the war settled down, started families, and bought homes, prompting a large settlement of neighborhoods like the Sunset and Visitacion Valley. As the city's popularity grew, so did a housing shortage. Those who owned property eventually capitalized from rising real estate values and cashed out, selling their homes, making a profit and moving to the suburbs. Homeowners were a population that benefitted hugely from San Francisco's growth.
Conversely, if individuals were denied banks' support in purchasing homes in the 1930s and 40s, they were then unable to benefit from the eventual housing boom. Instead, many were dealt rising rents, decaying urban infrastructure and no property with which to invest. Homeowners in red neighborhoods who were denied loans often couldn't pay for the upkeep of their buildings, resulting in homelessness and abandoned properties, many of which became hotbeds for crime.
One could argue that the redlining that took place in San Francisco in 1937 greatly influenced how our neighborhoods function in 2014.
Redlining is sadly not a thing of the past, as contemporary articles in BusinessWeek and The New York Times prove. If you're really into learning more about redlining, check out this epic research paper published in 2012.
Do you know any more details about the history of redlining in San Francisco? How do you think it may have contributed—or not contributed—to our neighborhoods today?
San Francisco
About 3 hours ago