NoPa Vs. Western Addition: What's In A Name?

Photo: Flickr / torbakhopper
By Nuala Sawyer - Published on July 06, 2014.
San FranciscoDivisaderoAlamo SquareNoPa
We've noticed a pretty strong response from commenters when we use the term "NoPa" on Hoodline.
This article in particular raised some ire about what our neighborhood should or shouldn't be called. Some said that NoPa is "artificial conjuration of realtors trying to bite off NYC-style acronyms." Others state that "'NOPA' is clumsy, inelegant, and obtuse." The theory has even circled in the comments that "NoPa is a racist construct invented by realtors so that white people could be convinced to move in the Western Addition."
Here at Hoodline, we want to use names that residents recognize as most representative of their respective neighborhoods. With that in mind, we dug up a little history on the origins of "Western Addition," and what constitutes "NoPa" today.
Western Addition and The Outside Lands
Western Addition was first established in 1855. It encompassed roughly 500 square blocks from Larkin Street to Divisadero Street, which had been set as San Francisco's official western border in the city's 1851 charter. That's right—San Francisco ended at Divisadero.
Keep in mind that San Francisco developed from east to west, starting at the ports in the bay. The land that now boasts the Sunset, Golden Gate Park and the Richmond mostly consisted of sand dunes, with small settlements scattered here and there. The city known as San Francisco was concentrated downtown, and the "Western Addition" was its suburban neighborhood.
This development of Western Addition was triggered by the Van Ness Ordinance, which was issued to deal with land squatters who were creating settlements on land that they didn't legally own. According to Mel Scott in his book The San Francisco Bay Area: A Metropolis in Perspective, the ordinance had three parts and purposes. The first was to deal with the controversial issue of land titles (who owned what), the second was to reserve parts of the land for the city, and the third was to approve a city-planning map detailing the blocks from Larkin westward. This mapping defined the first draft of "Western Addition" — or, the westernmost part of San Francisco.
In the map below, drafted in 1861, you can see what was the beginning of Western Addition (to zoom in visit David Rumsey's site here). 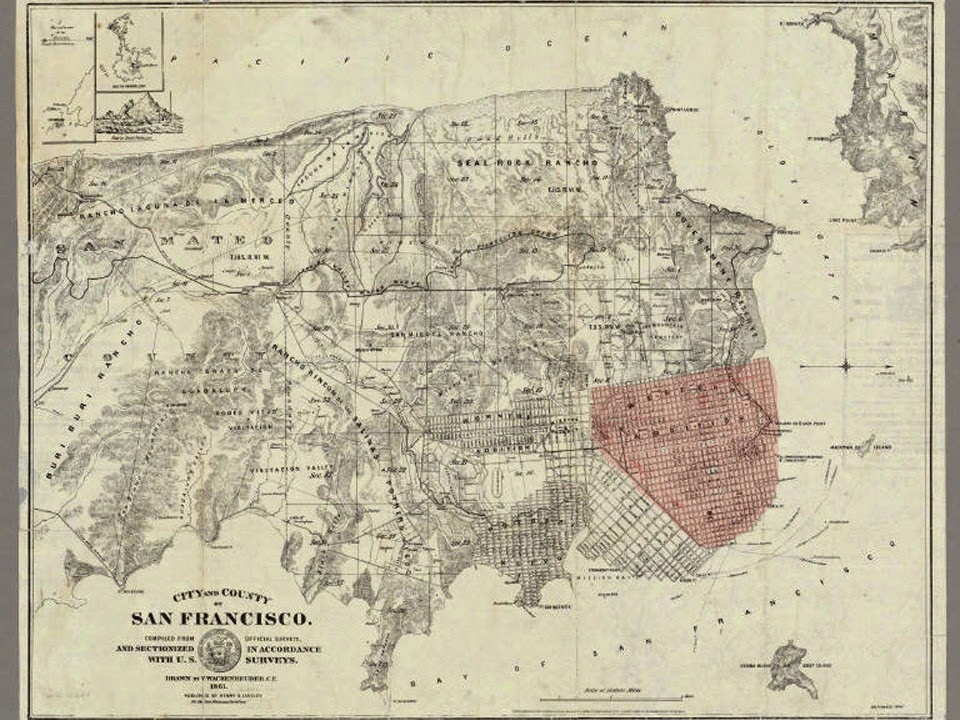 (Image: David Rumsey)
The area south and west of the charter line was known as "The Outside Property" or "The Outside Lands."  It included properties west of Divisadero, but also ranches to the south and southwest.  This land was assessed under the Van Ness Ordinance as well, but remained outside of the city proper until an 1865 decree extended San Francisco's western border all the way to the Pacific. Thus "Western Addition" informally came to refer to the entire swath of the city from Larkin to the ocean.
Once streetcars became popular toward the end of the 19th century, Western Addition became a hot residential suburb; the area was developed rapidly, and construction boomed. (If you want to get really geeky and track down the original grantholder for the land your house is on, check out a list from the 1870s here.)
And as the population grew, new neighborhoods began to emerge within Western Addition, generally organized around commercial strips. The "Fillmore District" was designated by city officials in the 1880s to lure residents from the original footprint of the city, which was growing overcrowded. The Richmond District followed in 1890. Japantown was moved to its current location in the wake of the 1906 earthquake. And more recently, areas like Hayes Valley, Pacific Heights and Alamo Square have become desirable neighborhoods to call home.
Thus, more specific neighborhood names eventually gained traction within the huge area known as Western Addition.  However, in some pockets, "Western Addition" still remains the name of choice.
Western Addition Today
So that's the history of Western Addition nomenclature, but what is it technically defined as today?
According to The San Francisco Association of Realtors, Western Addition (which they call "the city's first multicultural neighborhood") has had its footprint reduced to the area below: 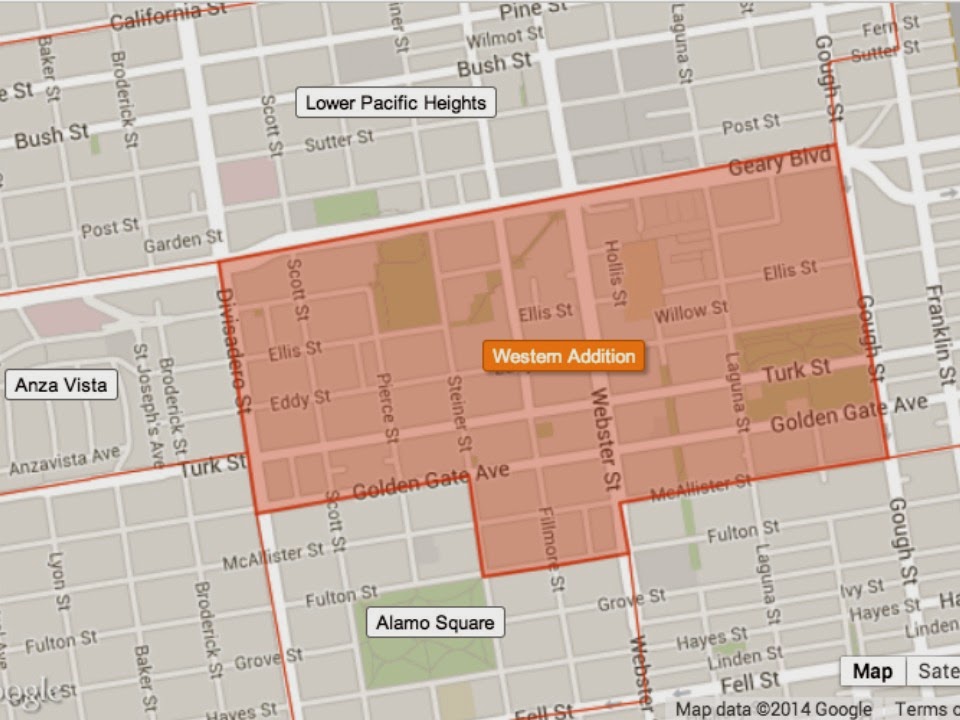 (Image: The San Francisco Association of Realtors)
Of course, realtors have financial motivations in marking where neighborhood lines end and begin. However, it is worth referencing that houses listed in the shaded area above will be defined by realtors as Western Addition, and houses outside of that shading will not.
And it's perhaps no surprise that Western Addition has shrunk, especially in recent years. A controversial mid-century redevelopment effort displaced much of the area's long-time residents, destroying housing units, forcing businesses to close, and dividing communities via the creation of Geary Boulevard. For more details on this troubling period in San Francisco development, check out this excellent article at FoundSF.
NoPa
The borders of Western Addition have a rich and complicated history, but we were specifically curious about the neighborhood that inspired our research: the area north of the Panhandle.
As we mentioned earlier, the area of the city west of Divisadero technically lay just beyond Western Addition, though people still referred to it as such.  A couple of examples: In 1905 the city's Board of Supervisors listed several blocks north of the Panhandle as being part of Western Addition, and a newspaper article written in 1912 detailed that Hayes between Broderick and Baker was considered part of Western Addition as well.
So where did "NoPa" come from? It's an abbreviation of what people have been calling the area for more than 100 years. References to "North of the Panhandle" or "North of Panhandle" can be found dating back to the beginning of the 20th century.  There was even a North of Panhandle Improvement Club, a precursor to today's local neighborhood association.
As for the term "NoPa" itself, popular belief holds that it was created by realtors looking to rebrand the neighborhood.  In fact, it was actually created by the neighborhood.
It turns out that the origins of NoPa grew from the North of the Panhandle Neighborhood Association (NOPNA).  Created in the early 1990s, NOPNA's mission is to "establish neighborhood unity, maintain multi-ethnic, multi-cultural diversity, foster a sense of neighborhood pride, promote a safe and clean community, and improve the quality of life for all residents of the neighborhood."
One only has to talk to residents of the neighborhood who have been here for 15+ years to learn about how drastically things have changed since NOPNA came into play. The neighborhood's crime rate has dropped, traffic on Divisadero has slowed, small businesses are finding it a vibrant area in which to open their doors, and, because of all of these factors, more people want to move here.
According to longtime neighborhood resident and NOPNA board member James Cowan, NOPNA tried out the name "NoPa" in a couple of newsletters in the 1990s, when the organization briefly changed the title of its publication from "North Panhandle News" to "NoPa News".
The name didn't stick.
Writer Mat Honan described the neighborhood in a 2000 piece for the San Francisco Bay Guardian, which might be the first published usage of the term "NoPa." In it, Honan describes the neighborhood as "struggling to define itself as gentrification takes hold."
It wasn't until Nopa the restaurant moved in in 2006, with an odd name that required constant explanation, that the neighborhood's acronym was pushed into popular use.
As for the claims that "NoPa" was created by real estate moguls, James has heard rumors that "Parc North" was the proposed terminology, but that it was vetoed by residents.
And there you have it. Yes, NoPa is a very recent term for the neighborhood formerly known as North of the Panhandle, and it is still sometimes called Western Addition. But as current NOPNA president JJ Strahle reminds us, "There's nothing wrong with a neighborhood within a neighborhood within a city. "
So now we turn to you, readers. Do you think the name of a neighborhood matters? Or is it the accepted borders that matter more? And what do you call this neighborhood west of Divis – Western Addition, NoPa, or something else entirely?  Let us know your thoughts in the comments.
San FranciscoDivisaderoAlamo SquareNoPa
About 9 hours ago