Photo: Andrew Dudley / Hoodline
By Andrew Dudley - Published on October 08, 2014.
San FranciscoHayes ValleyLower Haight
Were you oddly excited to go to work this morning, and you're not quite sure why?
It could be this.
The new transit-only lane on the eastern end of Haight Street officially opened to traffic today.  That means if you take the 6, 7, or 71L Muni lines inbound, you'll no longer get detoured when you hit Laguna.  Instead, you'll continue coasting down Haight Street via your own private express lane, all the way to Market Street. In theory, this could easily shave a few minutes off your commute.
Because of this new lane, a few Muni stops have been reconfigured. That inbound stop at Laguna and Haight is gone, as are the two inbound stops on Page Street (at Octavia and Franklin, respectively).  The outbound stop at Haight and Octavia has also been removed. Meanwhile, a new inbound stop has been created at Haight and Gough, outside the Fast Frame shop. 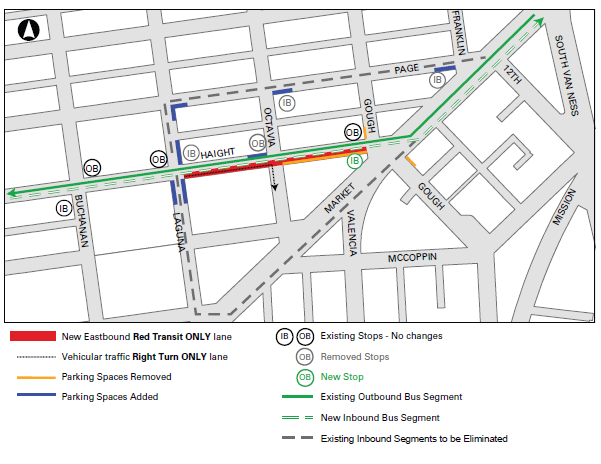 via SFMTA
If you take (or took) a bus — or car or bike, for that matter — down Haight Street today, we want to hear from you.  If you notice any significant change in your travels, let us know how it goes in the comments.
San FranciscoHayes ValleyLower Haight
Feb 03, 2023