Remember back in October, when we asked you to nominate a local hero? This week, as the holiday season kicks into gear, we'll be featuring a few of the people and places that readers wrote in to nominate as the individuals and organizations doing good in our neighborhoods.

It’s a gray day when Amy Farah Weiss takes us on a tour of the New Liberation Community Garden, but her wide-eyed optimism is in full evidence as she shows us around.

She starts with what she calls the “aromatherapy tour”: fennel, lemon balm, a geranium that was donated by the forcibly decommissioned Hayes Valley Farm. The last aromatic is a robust rosemary bush: “This is the one thing that was here when we got here,” Amy says, then gestures to a majestic Monterey Pine whose canopy hangs over the south end of the garden. “This and Monty.”

Before we continue with the rest of the tour, she tells us about a deceased rodent she’d found in the garden that morning. “I did not want to move that dead rat, but I see the problem and I’m going to deal with it. That’s what being a hero is, I guess,” she says. 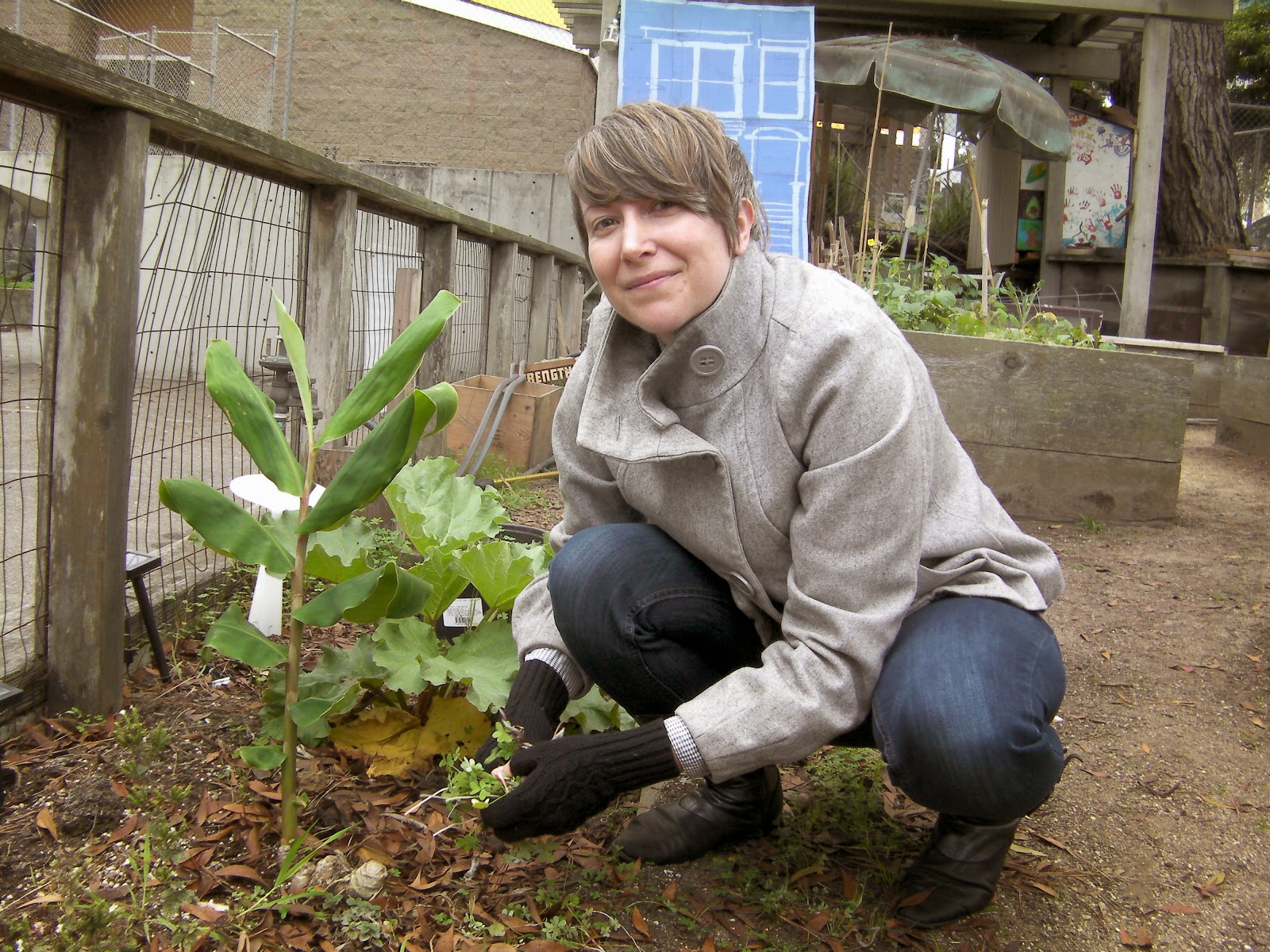 Since Amy moved to the neighborhood in 2008, she's witnessed problems, and has set it as her mission to be part of the solution. In fact, she’s pretty much been organizing full-time, not just to oppose developments that the community didn’t want, but to support projects that would benefit the community.

Between that, completing her interdisciplinary Master's degree in Organizational Development and Training at SF State in 2010, and being displaced from rent-controlled apartments not once but twice, she hasn’t had much time for a salaried position, and thus has rarely made what many of her neighbors might consider enough money to live on (she’s made between $13,000 and $22,000 a year for the last five years). Clearly, she's not in it for the money.

Amy’s path to local activist status was a fairly long and winding one. She was born in Berkeley and grew up in San Jose, often coming up to San Francisco only “in a touristy way." One thing she seems to have taken away from growing up in San Jose, “where people describe where they live in relation to the nearest shopping mall,” is that she really loves being able to say she lives north of a public park—in this case, the Panhandle.

Before she got to NoPa, Amy spent some time in Portland and then traveled around the country working in a variety of fields: mental health, housing, youth development, poverty eradication, organic farming, and sustainability—all of which most definitely shaped who she is today. “I had been a tumbleweed for over a decade, and I finally decided that the most radical and healing thing I could do was to stay in one place and figure out what it meant to build community and belong to a neighborhood and city, to have a sense of place.”

Amy moved to San Francisco in 2007. Her first residence was in Cole Valley, in a rent-controlled apartment that she had to move out of shortly thereafter when the master tenant decided to move on. She moved into a place in the Divis/NoPa neighborhood in 2008.

Her first community organizing gig in the neighborhood was to work with a group of dedicated neighbors (whom she calls the local heroes), including Tenants Together’s Dean Preston and the Alamo Square Neighborhood Association’s Gus Hernandez, to try and stop the Chase Bank that now sits at the corner of Oak and Divisadero. She and her neighbors did extensive research on the city’s zoning laws and went to numerous hearings of the Planning Commission to oppose the eviction of two locally owned businesses to make way for a branch of the megabank.

When Chase was allowed to move in, which Amy says was a clear violation of San Francisco’s formula retail law, she organized a boycott campaign called Occupy 401 Divis. Amy’s first San Francisco “artivist” (art + activism) project was to make a video for Occupy 401 Divis where she dressed up as John Lennon, changed up the lyrics to “Give Peace a Chance,” and made appearances at the Divisadero Farmer’s Market, OccupySF, Muni, and Mission Sunday Streetss.

She soon realized, however, that it wasn’t enough to say no to the bank. “When you say no to something, it’s important to ask yourself what you’re saying yes to,” she says. So the boycotters started standing outside of Chase bank, urging people not to do business there but also holding signs that said “I ♥ MY CREDIT UNION” and handing out information to their neighbors about local credit unions—including the institution where Amy does her own banking, the SF Fire Credit Union. 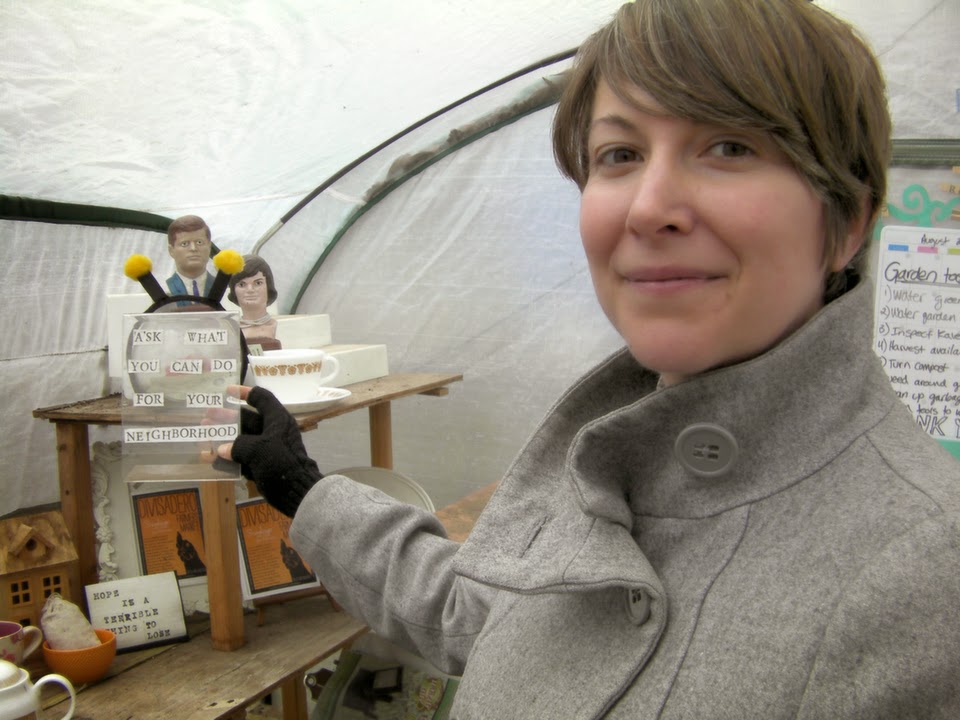 Saying Yes To the Harding Hive

It was through a neighbor active with Occupy 401 Divis that Amy first learned the history of the Harding Theater, the blighted theater next door to the Independent, which had been saved from demolition by neighborhood activists in 2005 due to its historical significance.

In early 2012, Amy founded Neighbors Developing Divisadero to put her YIMBY (Yes In My Backyard) ethos more fully into practice, and jumped into the fray with the Harding Theater Revitalization Project/Harding Hive Campaign, an ambitious plan to buy the Harding Theater from its current owners, who wanted to tear it down and build condos. “Be a YIMBY! Say YES to what you want in your backyard. Say YES to the vision of revitalizing the Harding Theater as the Harding Hive, a multi-use incubator and showcase venue for creativity, entrepreneurship, civic engagement, community building, and sustainability,” the campaign urged.

The Harding Hive campaign collected survey responses from over 300 neighbors for ideas on what to do with the space to most benefit the community (“Thanks in part to a Haighteration article that helped spread the word,” she said). The $3.6 million fundraising campaign kicked off with over 150 neighbors raising thousands of dollars at the Westerfeld Mansion on July 1st, 2012—but the Harding’s owners took the theater off the market in response to the community’s fundraising efforts.

Though the campaign is pretty much at a stalemate at this point, given that the building is no longer for sale, Amy has not given up on supporting the Harding on its journey “from blight to opening night.” She argues: “Since the property owner continues to keep the theater blighted despite legitimate above-market-rate offers—offers that provide him with a profit on his initial purchase—it seems time for neighbors to push the city to use its power of eminent domain.” (Read more about it our latest update on the ongoing Harding Theater saga.)

In the fall of 2012, Amy asked the owner of the Harding to let her turn the theater’s backyard into a community garden and meeting space, but he declined that offer as well, citing fears he’d be sued if and when he might decide to kick them out.

Meanwhile, Amy had walked past the overgrown plot of land next to the New Liberation Church at Eddy and Divisadero many times over the years, and she decided to move her plans for a community garden down the road. The space had actually been a community garden from the early '90s to 2004, but had lain fallow for the better part of a decade until Amy came along in December 2012 and founded the New Liberation Community Garden. (The garden itself has a much longer history steeped in San Francisco lore, which Amy has studied at length and is happy to discuss with anyone who wants to hear about it.) 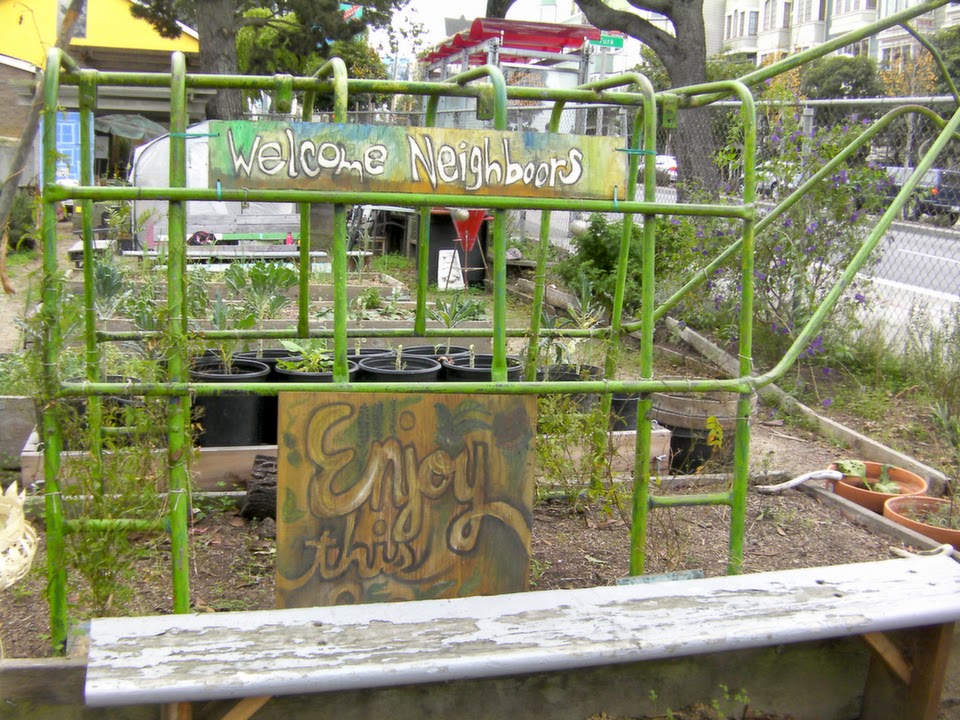 Despite operating on a shoestring budget—when there even is a budget—Amy has organized New Liberation Community Garden so that it is whatever the community wants to make of it. Anyone is free to stop in during open gardening hours from noon to 2:00pm on Tuesdays, whether they’re just looking to pitch in and do some weeding or hoping to adopt a little plot of their own and cultivate some crops. “I see myself as a temporary steward of the space,” Amy says, explaining that she’s not trying to impose some kind of strict program so much as show people the potential of community gardening.

"My main goal with New Liberation Community Garden has always been to try and figure out how this green neighborhood-operated space could best support the actual needs of neighbors in an inclusive, enriching, and sustainable way,” she says. Amy piloted a backyard soil-testing project earlier this year called Soil Scouts (which we profiled at the time).

The results of the pilot program produced alarming results: six of the seven backyards Amy tested in the 94117 and 94115 zip codes had medium to high levels of lead, according to tests performed by the University of Massachusetts, Amherst soil testing lab. “After almost two years,” she says, “I now feel certain that the best way to support the Divisadero and Fillmore neighborhoods through New Lib is to create jobs for our young adults that help heal the soil in our backyards and grow healthy soil, food, and medicine for neighbors.”

There’s still plenty of room for neighbors to make of the New Liberation Community Garden whatever they dream it can be. If you want to get involved, Amy urges you to stop by or contact her at info [at] nddivis [dot] org. The space is available for events like garden parties and acoustic musical performances, as well as workshops on soil remediation and other “garden support activities.” If you have expertise with permaculture gardening, or are an artist or builder who’d like to help design and beautify the garden, she would especially love to hear from you.

If you don’t have time to get your hands dirty but want to pitch in all the same, another big thing you could do to help is make a donation—Intersection for the Arts is a fiscal sponsor of Neighbors Developing Divisadero, meaning the group has 501c3 status, so donations are tax deductible.

Though there’s only been a few thousand dollars to operate the garden since 2013, people have pitched in when they can, volunteering their time and knowledge (and, in one case, a donated greenhouse). And the Alamo Square Neighborhood Association made a $3,000 donation so that Monty the Monterey Pine could get a badly needed pruning.

Though it operates on a shoestring budget, the garden is impressive. Soil tests have revealed a lack of nitrogen, which is very much necessary for plants to grow, so right now they’re planning to plant an overwinter cover crop that will fix nitrogen. But even on a gray day in November, plenty of food could be found: kale, chard, tomatoes, fava beans, peas, and, most incredibly, oranges. 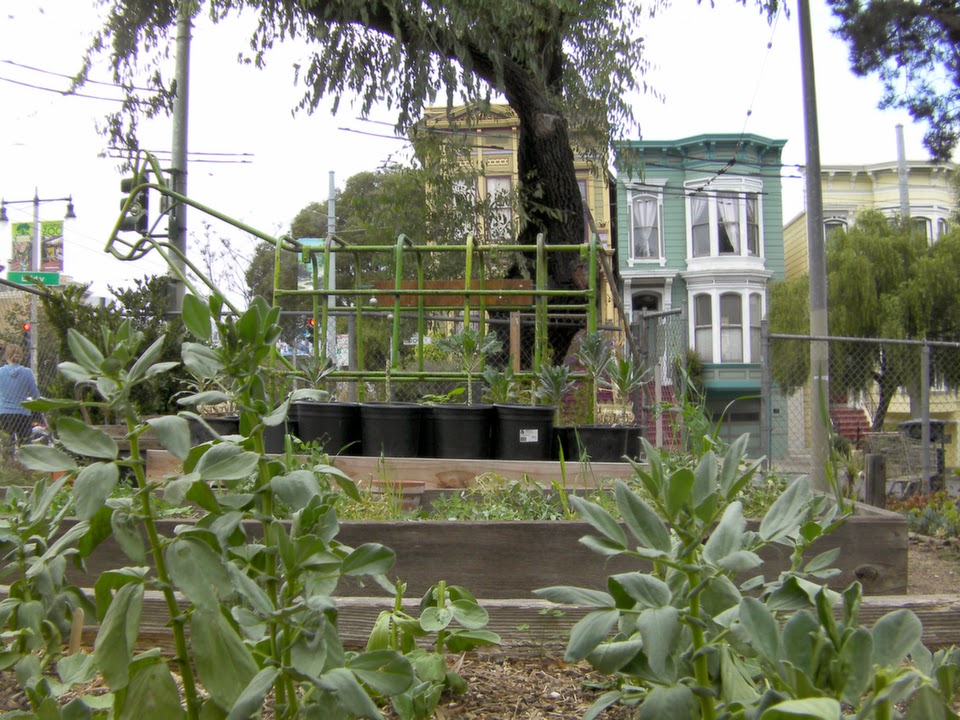 It's tempting to credit the garden's tenacity to Amy Farah Weiss' heroic efforts, but the project can also be credited to the greater community which has chosen to follow Amy's YIMBY lead and say "yes" to community initiatives in its own backyard.

If you've got a local resident or organization that you think is making a positive difference in our neighborhoods, let us know at tips [at] hoodline [dot] com.
San FranciscoDivisaderoNoPa
Jun 18, 2021