Photos via Eric Broers
By Meaghan Clark - Published on December 16, 2014.
San FranciscoHayes Valley
If you’ve got a thing for Instagram and love scouting local art, then you probably know artist Eric Broers, aka hiericbro. With more than 1.4K followers on the social media photo-sharing app, the Hayes Valley artist frequently posts his work locally, checking in at the Hayes Valley Play Structure just around the corner from his home.
A product specialist at Wix, Eric has been curating art shows in the city for more than a decade, opening up in the Dogpatch and connecting with local artists like Mars-1, before he made the trek to become a permanent resident of the left coast. It was the great food and sense of community that finally brought him to San Francisco, and since 2010 he’s been a resident of Hayes Valley. “With all manner of sculptors pulling in through Patricia’s Green, it’s a spot where you get to see the whole community,” he says. “The secluded park allows you to contemplate.” 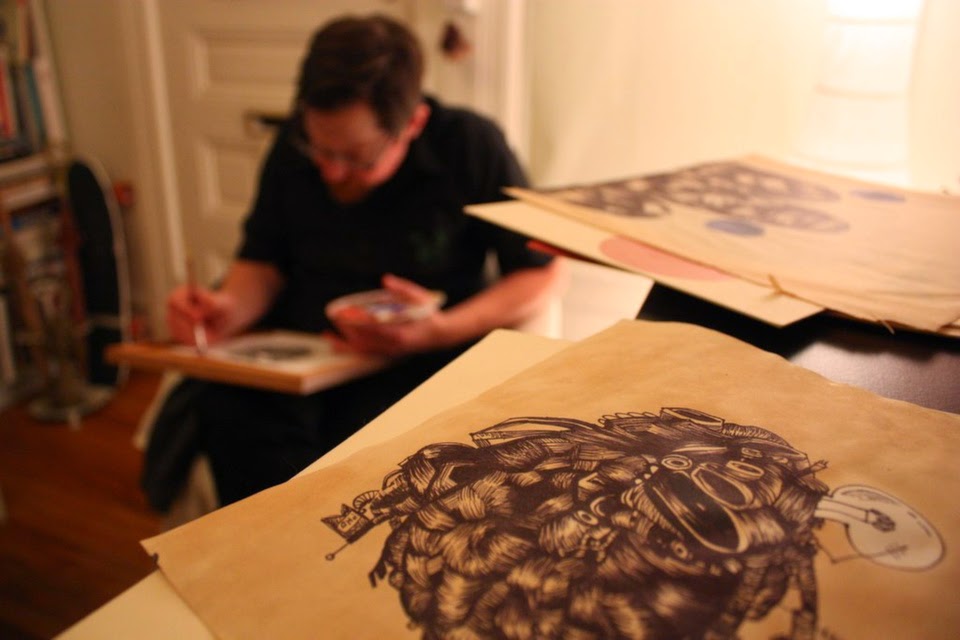 We grabbed a cup of coffee with Eric at Momi Toby’s Revolution Cafe before checking out the Artist’s Pop-Up at Proxy, where Eric is now showing his work.
How would you describe the progression in your work?
"I really enjoy creating patterns, so any place I can work patterns into my character-driven stuff is great. I initially drew faces as more of a side project, but never thought that work would do well on my fine art or murals projects. A year ago I started adding faces and moving patterns into all of my work, and now everything I enjoy doing is coming out on the page." 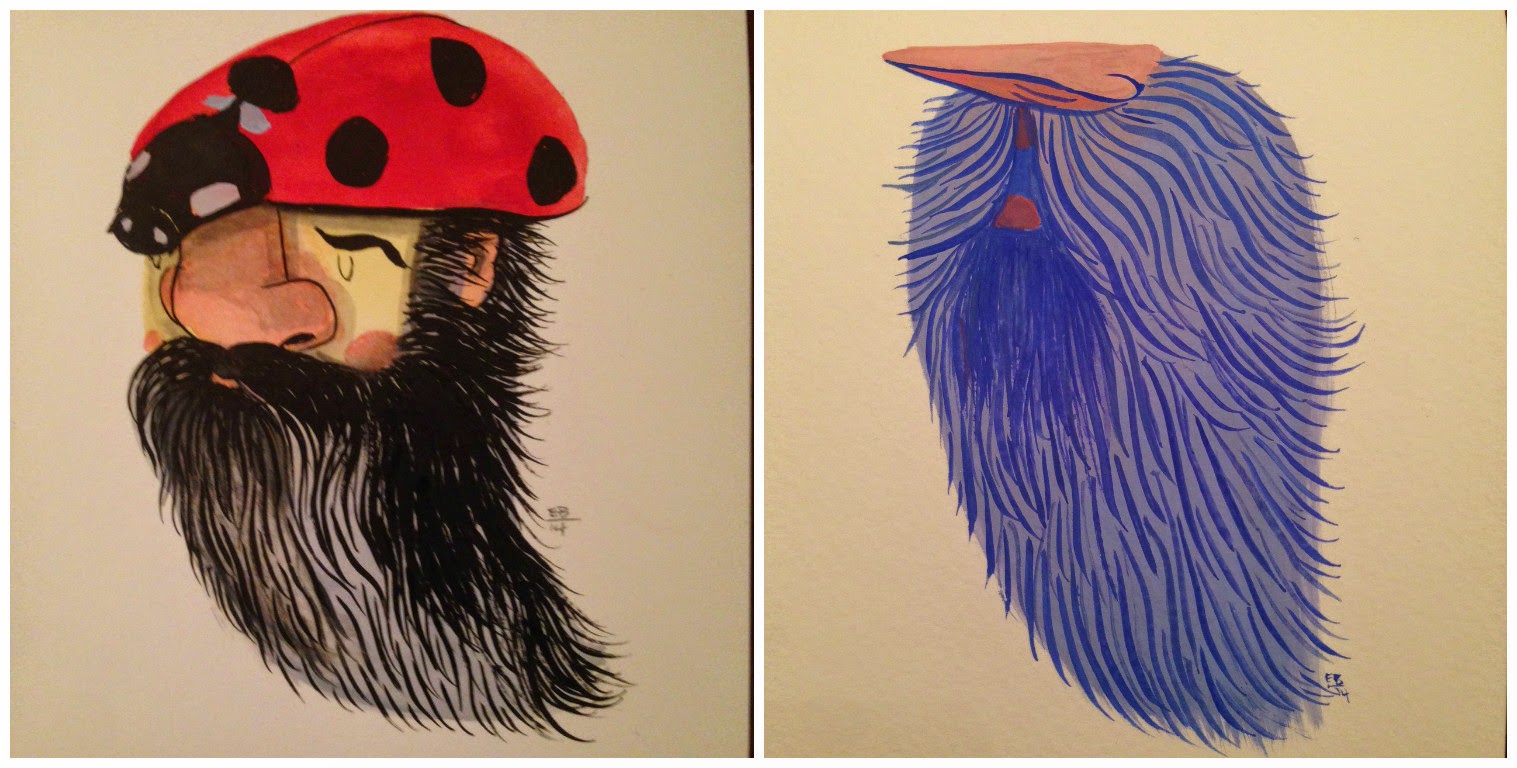 How did you gain exposure?
"I owe it all to the Internet. I made a lot of connections internationally through MySpace, Flickr, and traveled for shows. Anytime my work was showing in a place I hadn't been, I would go there and that would be my vacation. The first time I did that was Taipei. After that I went to Japan, San Francisco, LA, Manchester, Manila and Tel Aviv. When you’re working with the people and eating delicious food, it inspires me and I hope it inspires them as well."
When did you starting showing/curating in Hayes Valley?
The first show I ever curated was Heavy Hitterz in Hayes Valley where 150 artists showed. We packed it with friends and ran it for a month. That set me up for smaller shows. I’m first and foremost a painter and drawer, but I enjoy conversation and collaboration, and that’s all part of curating. It’s about getting artists together.
How’d you get involved in murals for San Francisco?
I had a painting studio in a gallery called Lower Haters that curated and commissioned murals in the area. I exhibited with them from 2007-2013, and painted two murals. 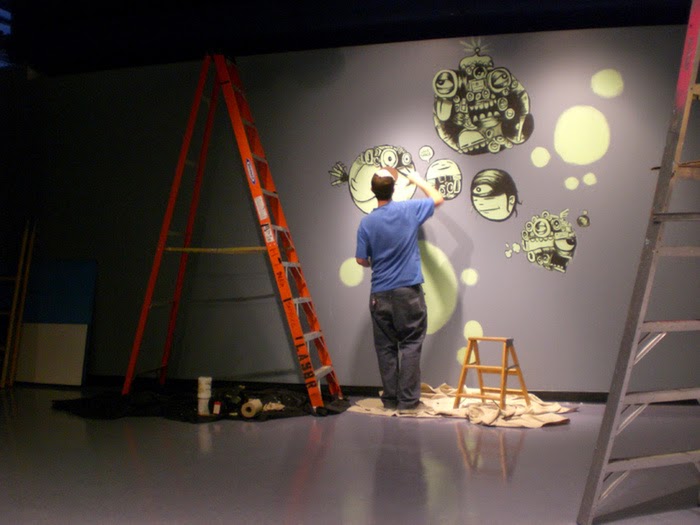 What’s your most memorable art moment?
In 2006 I was included in a one-month series of three shows that toured San Francisco and San Jose. As part of the showcase, the artist is expected to live paint and have work to exhibit. The first night I was live painting for the first time and on a dime one man bought every single piece in my collection—this included all the pieces that were ready to show. I was elated and completely frightened at the same time; elated that I had a sold-out show only an hour into the exhibit, and scared that I only had a week to create work for the next show. Needless to say I learned a ton and did not see the light of day for the next week.
What are some of your favorite places in Hayes Valley?
For brunch, Arlequin is my favorite place without a doubt. Suppenkuche has an emperor’s pancake that makes you feel like an emperor. Patxi's, being from Chicago, is a favorite. And Two Sisters—I would like them to open a little earlier [the earliest they open is noon] but it’s always been great. Bar Jules—they have the best burger I’ve had in my entire life.

Check out more of Eric's work on Instagram, on his website, or at the Artist's Pop-up at Proxy, which runs through December 24th.
San FranciscoHayes Valley
Jan 14, 2022