Photo: Mike Gaworecki/Hoodline
By Mike Gaworecki - Published on January 03, 2015.
San FranciscoDivisaderoLower Haight
Local artist Katie Steward has only been in San Francisco for a little over a year, but she's already making her mark on the city: her new mural just went up on Thursday at 1069 Oak St., behind the Kelly-Moore Paints building at Oak and Divisadero.

Though the vibrantly-colored piece can certainly be said to brighten up the intersection of Divisadero and Oak, it also has a dark side to it, as it depicts a disfigured dancer in an attempt to capture how dancing can feel to the performer rather than the audience. "While the subject matter is a little dark," Steward told us, "I think the bright colors and shapes make it feel bold and energetic while still having a dark undertone."

The piece was painted on a number of panels in Steward's garage and assembled onsite. Here's the work in progress: 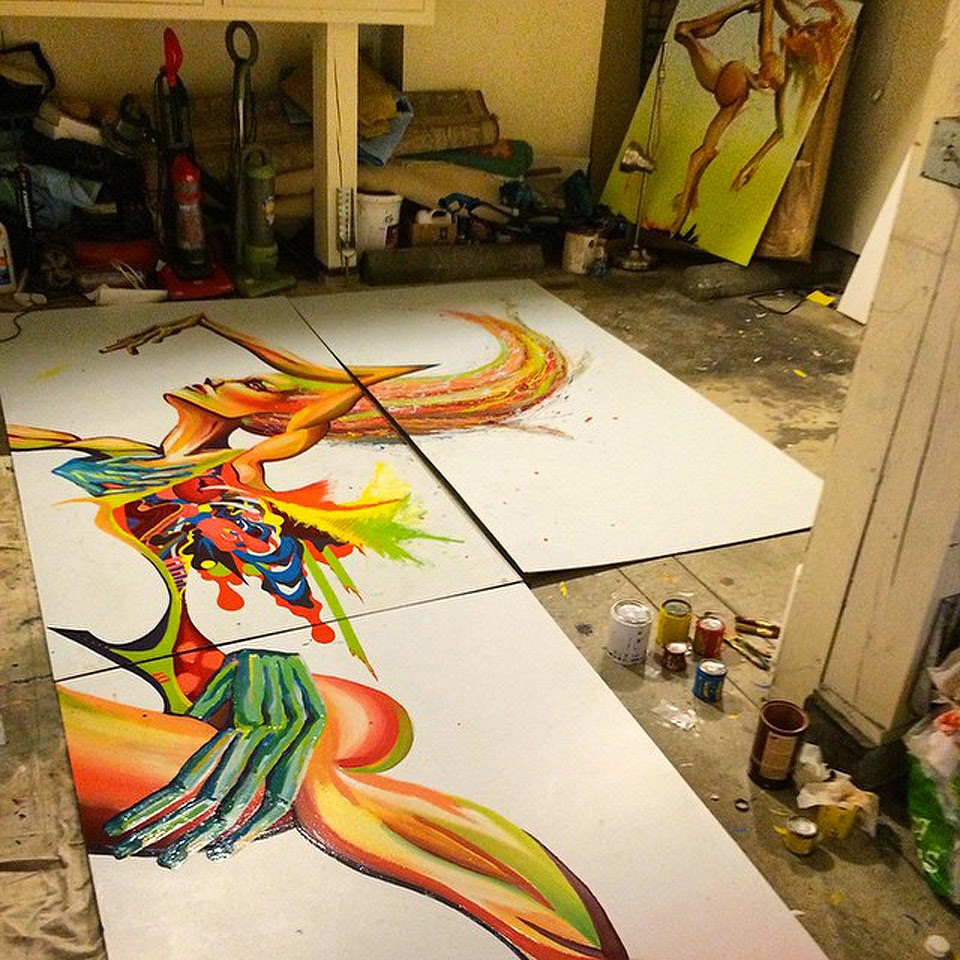 Since she's new on the scene, Hoodline spoke with Katie Steward via email to learn what inspired this particular mural project and where you can check out more of her work.

How did this project come about? It's on a private building, do you know the owner or did they put out a call for submissions or what?
"The owner is actually a friend of mine. He’s been wanting to put a mural up on the building for a while, and had been talking to another artist about the project before we met. I think my work just resonated with him and what he was looking for."
Was the piece designed specifically for that space? If not, why did you choose that space?
"There was a challenge in trying to figure out how to put a mural on that space without having to use scaffolding and paint on site. So we planned it out and decided to grid the painting out on plywood and then install it on the wall after it was finished. We measured the building and basically decided by eye what size image would look best."
Was there a theme you were given to work with, or did you choose? What is the theme of the work?
"The work is based on a series of paintings and drawings I’d already been working on. It’s a series of disfigured dancers meant to represent the art form through the way it feels rather than the way it looks to the audience. For this piece I added more graphic elements to make it stand out as a mural and a little less like a fine art painting. While the subject matter is a little dark, I think the bright colors and shapes make it feel bold and energetic while still having a dark undertone. Also, I think even thought the subject matter is a dancer the feeling and emotion of the piece can be interpreted to relate to everyday life. "
Anything else we should know about the piece in terms of techniques used or anything like that?
"I usually work with oil paint so this was my first time working on such a large scale and using exterior paints. After asking around to some friends I ended up going with OneShot exterior sign paint. The colors came out great, but it was a challenge for me to adapt to paint that dries quickly."
Is it going to be permanent?
"Hopefully. As long as the paint and panels last."
How long have you lived in SF?
"I’ve been in SF a little over a year. I’m from NY originally, then moved to Miami, and then San Diego for work before coming up to the Bay Area. I’ve been working as an Art Director in advertising for about six years, so that's taken me to a few different cities."
Got anything else coming up in the neighborhood?
"I don’t have any other large mural pieces in the works right now. I’ll be back in the studio (a.k.a my garage ) working on more oil paintings in the same series over the next few months. But this project has been fun and I’d love to work on some more large scale pieces."
What other work do you have up in the city that we can mention? Where can folks check out more of your work?
"Right now I have a few pieces at a place in the Castro called Revamp Salon, and then some paintings that have been up for a while at Honey Hive Gallery in the Sunset.
You can check out Katie Steward's new mural at 1069 Oak St., and see more of her work on her website.
San FranciscoDivisaderoLower Haight
About 24 hours ago