Sacred Heart Church Could Be Designated A Landmark

It has hosted Catholic parishioners, Black Panthers, Vietnam War protesters, and, most recently, roller skaters. And now, Sacred Heart Church at 546 Fillmore St. could be on its way to becoming an official San Francisco landmark.

The 117-year-old complex (actually four buildings — a church, rectory, school and convent), which has been effectively vacant for more than a decade, is the focus of a new preservation effort by local community members who have submitted an 82-page report on the building's history and significance to the Historic Preservation Commission. 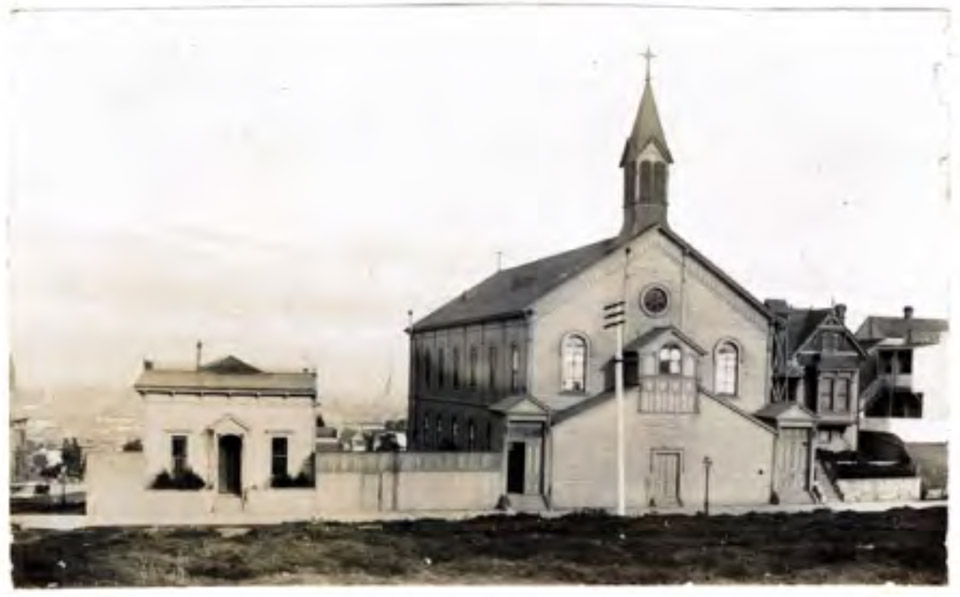 The report was funded via an $8,000 grant from the city's Historic Preservation Fund, a $2.5 million resource established in 2005 to support small preservation-related projects in San Francisco. Such projects have included architectural analyses, historical surveys, and nominations to the National Register of Historic Places. The fund is under the care of the Mayor's Office of Economic Workforce Development (OEWD).

Jonathan Lau of the OEWD tells Hoodline that the fund recently received (and approved) an application from a group of community members, including ex-parishioners of the church, as well as a fiscal sponsor (the SF Study Center), looking to advocate that the church be deemed a landmark.

In the most recent draft, the report claims that the church features architectural significance:

"The parish complex is significant as a distinctive and well‐preserved example of a late nineteenth‐century Catholic parish grouping that exhibits a unified, hierarchical scheme of Romanesque Revival design. The church building is also individually significant as a distinctive and well‐executed example of Italian Romanesque Revival style architecture in San Francisco and as the work of master architect Thomas J. Welsh ... Sacred Heart Church also possesses high artistic values in its well‐developed exterior and interior expression of Italian Romanesque Revival design and an interior decorative program that expresses the cultural values of the Catholic faith in the late nineteenth and early twentieth centuries."

Additionally, the report notes the church's role in various social justice movements in the '60s and '70s:

"From 1968‐1972 under the leadership of Father Eugene Boyle, the parish complex was the site of a robust and often controversial program of Catholic and secular social justice activism in the civil rights movement, the farmworker labor movement, the Vietnam War, and urban renewal. The parish complex was the site of the local Black Panther Party Breakfast Program, meetings of anti‐Vietnam War and San Francisco State University student activists, and the start of the 1970 United Farmworkers Union lettuce boycott in San Francisco. The activities at the parish and public and Catholic response to them illustrate an important period in the broader history of the Roman Catholic Church in the U.S. and in San Francisco as the institution negotiated its local and national political stances and interventions in the social justice issues of the mid twentieth century. The activism at Sacred Heart Church similarly illustrates the importance of the leadership of the Catholic Church in the social and political history of San Francisco, a predominantly Catholic city, during the period." 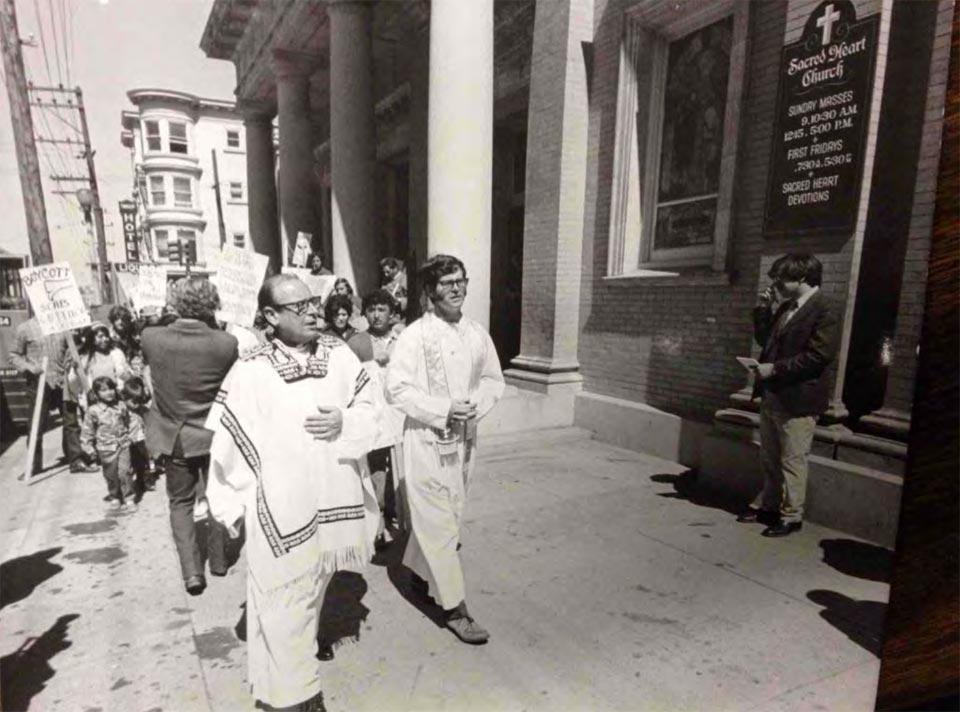 Father Eugene Boyle during the 1970 lettuce boycott. (Archives of the Archdiocese of San Francisco)

The Sacred Heart Church was completed in 1898, and continued hosting its Catholic congregation for more than a century. The structure suffered some damage, albeit cosmetic, in the 1989 Loma Prieta earthquake. However, following the quake, the city required unreinforced masonry buildings (like the Sacred Heart Church) to be seismically retrofitted. Rather than pay for the costly upgrades, and in light of a dwindling congregation, the archdiocese decided to shutter the church in 2004. The complex was sold the following year to the Megan Furth Catholic Academy, which made use of the school, rectory, and convent, but not the church itself.

In 2010, the contents of the church, including an organ, pews, and two stained glass windows, were controversially removed to be sold to benefit the academy. Then, in 2011, permitting records show that a partial seismic strengthening and foundation repair were performed, along with plumbing and electrical upgrades. The space would remain unused however, as the Megan Furth Academy merged with the Mission Dolores School on 16th Street in 2011.

The most notable use of the Sacred Heart Church in the years since has been the recurring roller skating event known as the Church of 8 Wheels, which debuted in 2013. Another building in the complex has been repurposed as The Center, a community event space.

There are currently 266 official historic landmarks in San Francisco. Landmark status ensures, among other things, that buildings cannot be demolished or significantly altered without additional scrutiny from the Planning Department.

The draft report on the Sacred Heart Parish Complex's potential for landmark status must now go to the Historic Preservation Commission (HPC). The HPC will hold a public hearing, after which it will decide whether to support the nomination. If it does so, the Planning Department would conduct public outreach, after which the nomination would go to the Board of Supervisors for a final vote.