From Haight Theater To Goodwill, The History Of 1700 Haight Street

For modern San Franciscans, catching a summer blockbuster means a bus ride, walk, or drive to one of the city's handful of multiplexes, but that wasn’t always the case. In the first half of the last century, the city all but exploded with movie theaters, but with a few exceptions, most of the smaller theaters that served individual neighborhoods are long gone.

One of those neighborhood spots was the Haight Theater, located at the northwest corner of Haight and Cole from 1910-1964. The address is now home to a Goodwill, but to celebrate its long history, we dug through the Chronicle’s archives and the San Francisco Public Library’s History Center to explore its evolution.

From family theater to gay film theater to concert venue, here’s the story of the Haight Theater’s progression through the 20th century—which, decade after decade, provides an interesting reflection of the progression of San Francisco as a whole. 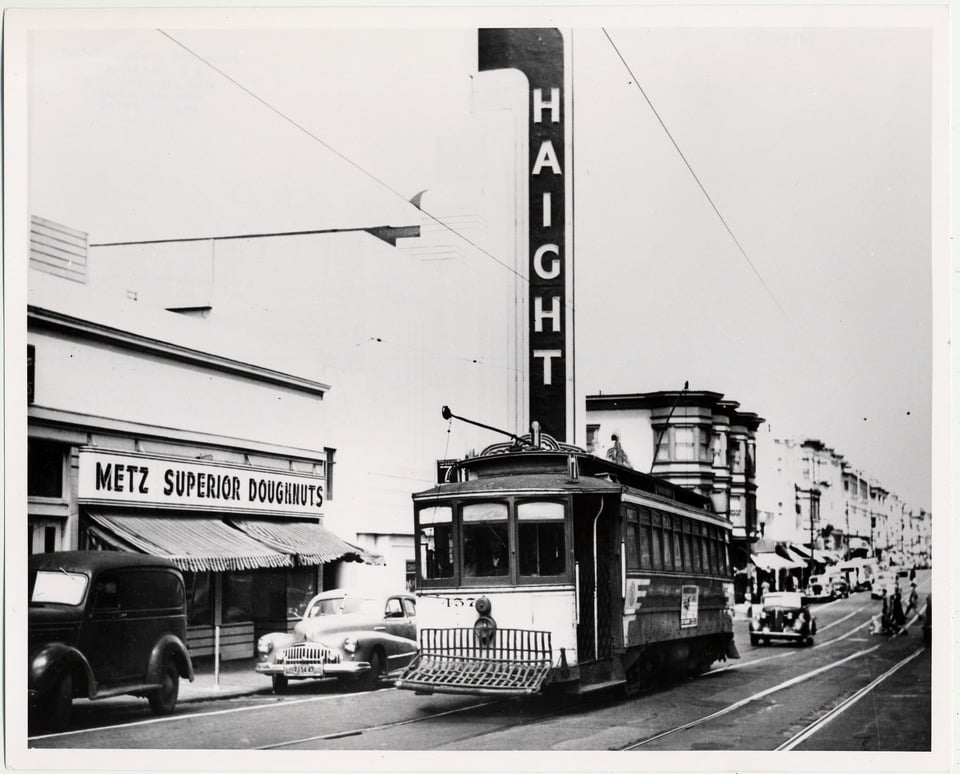 With the advent of motion pictures and new neighborhoods springing up near streetcar lines, the period from 1910 to 1930 was a boom time for new theaters. Done in the Art Deco style of the period, the Haight Theater debuted on March 8th, 1910 with one screen and a whopping 1,310 seats. The theater’s first night was marked by a sellout crowd (organized by the Ashbury Club), as well as a speech by then-mayor Patrick Henry McCarthy.

A March 7th, 1910 article profiling the opening of the theater said it was built at a cost of $33,000 (about $800,000 in today’s dollars). Since both movies and vaudeville acts were popular at the time, the theater boasted a complicated system of lines and pulleys, allowing it to move backdrops quickly. The Haight orchestra would often play live music to accompany the double features, foreign films, and films of every genre. 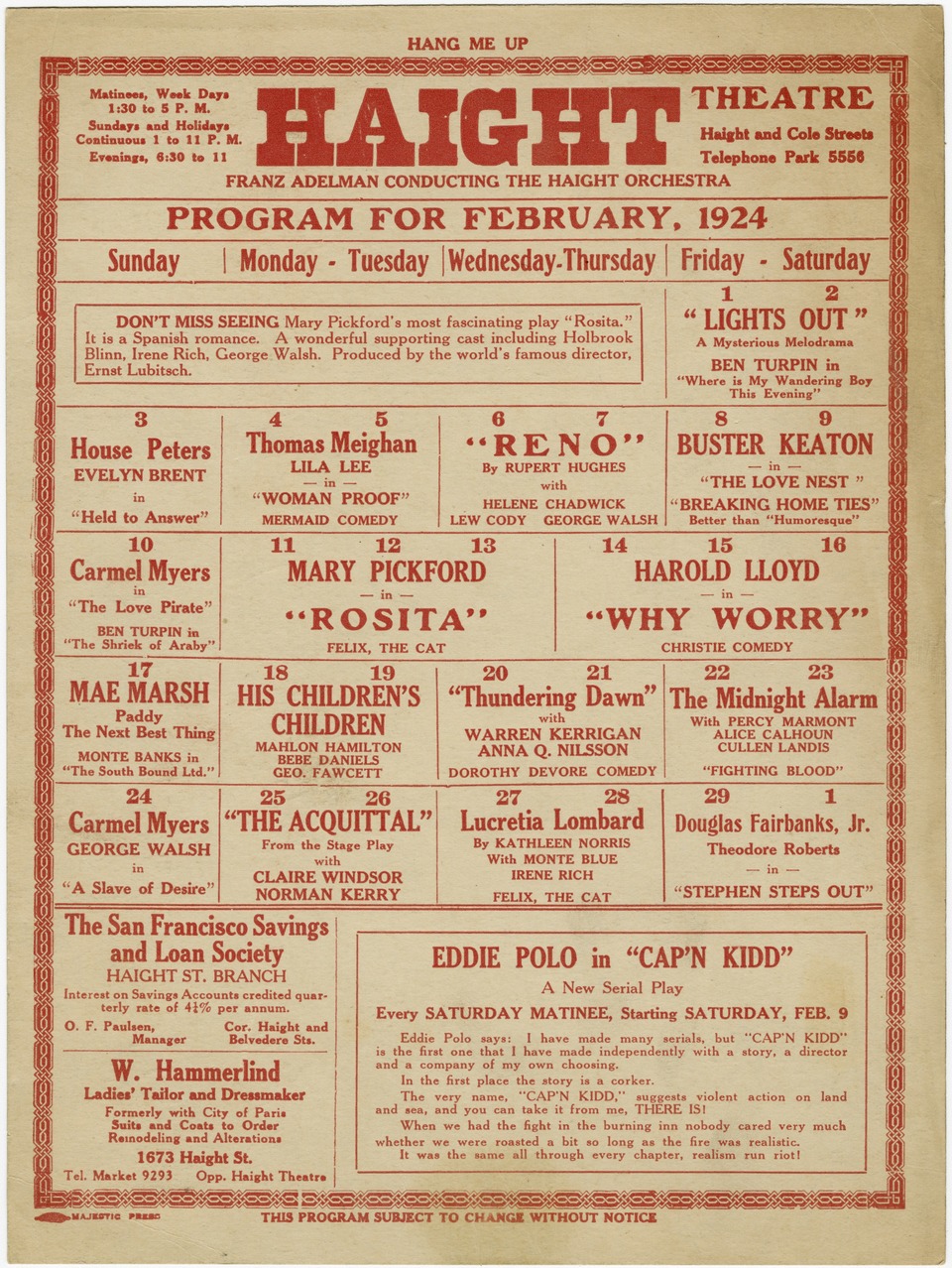 By the 1950s, many neighborhood theaters were struggling to survive. Families had moved out to the suburbs, and television was spreading like wildfire, providing stiff competition to the theater experience. When the Haight Theater changed hands in 1964, new owners Bernie Meshioff and Francis Rizzo decided to transform it into an experimental gay theater, the first of its kind.

“The walls in the lobby were painted black, and the murals—newly painted—depicted young men in various poses,” wrote the Chronicle in a July 28, 1964 profile. “Very little was left to the imagination.” Admission was $2 (a whopping $15 in today’s dollars), and included a drag show after the movie; the mezzanine featured art exhibits from local college students. The first title shown was Ed Wood’s 1953 camp classic Glen or Glenda, a semi-autobiographical docudrama about transsexuality and cross-dressing.

Given the era, the Haight Theater’s neighbors were outraged. In an August 1, 1964 article, the Chronicle describes a community meeting that attracted 60 area residents, who complained about having to explain the posters on the front of the theater to their children. Many feared that the homosexual theater would be contagious, though at least one student, Stephen De Canio, defended the theater, stating his belief that “this group has a prejudice against homosexuals.”

At the meeting, police assured residents that they were keeping an eye on the theater. In fact, Rizzo complained of police harassment in the July 28, 1964 article, noting that officers went into the theater hourly to stand by the door. Residents falsely accused the theater of showing pornography, demanding that Rizzo and Meshioff either switch back the theater back to showing family-friendly films or close down. The duo refused, citing the theater’s lack of financial success. “This used to be a family theater. It went broke,” Rizzo told the Chron. “They tried everything: art films, foreign films, Spanish-speaking films—and it went bust!”

A few days after the theater’s reopening, a dozen 12- to 14-year-old boys and their mothers staged a protest, chanting “Put the hex on sex! We want Tarzan!” On August 11th, 1964, the Chronicle reported that seven youths from Marin were arrested for disturbing the peace at the theater, while Meschioff was arrested for filing a false police report, after accusing the kids of trying to rob him. An employee later admitted that Meschioff had pressured him to go along with the lie. The charges against the kids were dropped.

In an August 19, 1964 article, the Chronicle reported on the “sordid end” of the Haight Theater. Meshioff and Rizzo had reportedly run off overnight, leaving behind not only the theater, but their Buena Vista Avenue home, a bench warrant and a series of bounced checks and unpaid bills. They were said to have fled San Francisco “in a new convertible with two female impersonators in the back seat.” 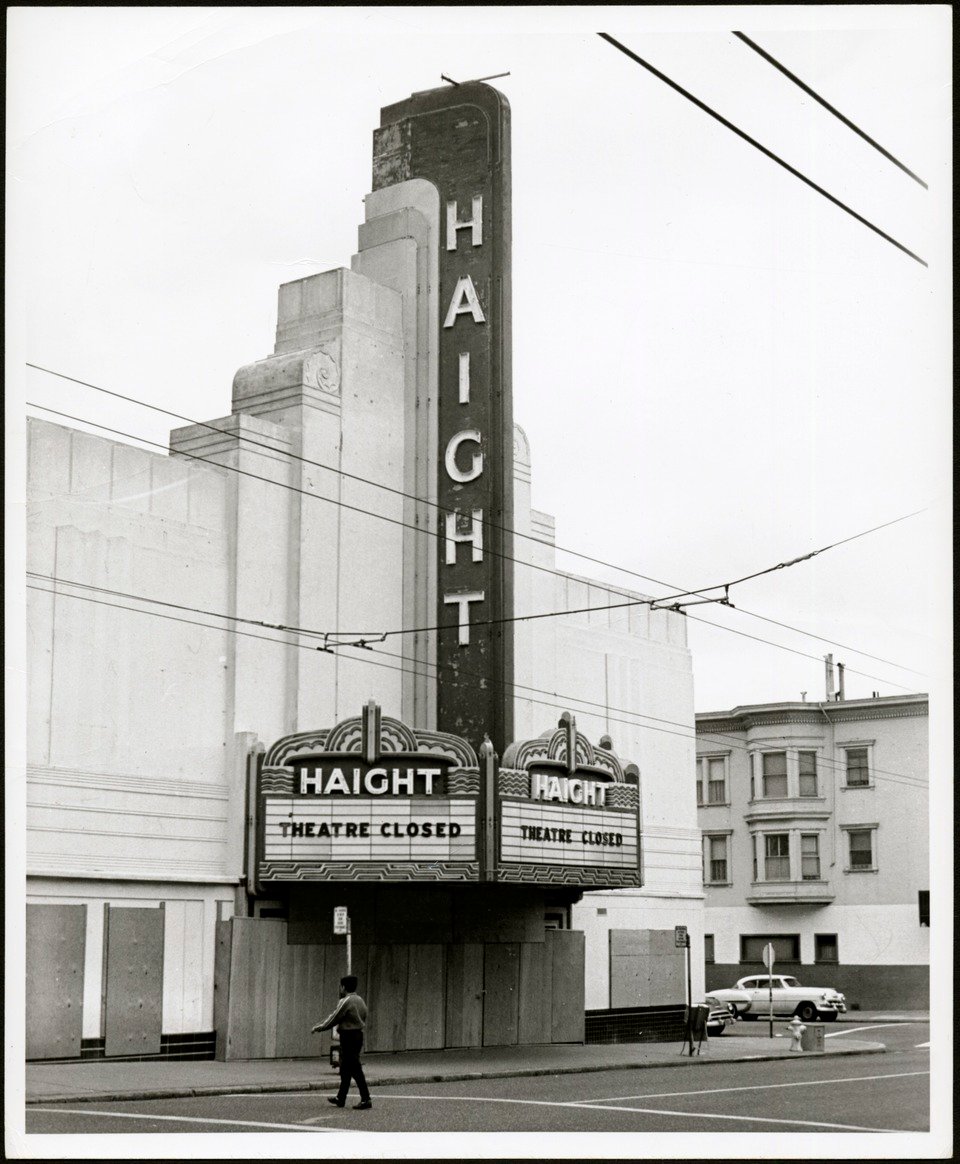 The Haight Theater remained vacant for a couple of years, until a group of five young local artists took ownership of the space and reopened it in August 1967. In a riff on the prior controversy, they renamed it the Straight Theater. (The marquee announced that “The Haight Is Straight!”) An August 7, 1967 profile notes that the group spent 18 months renovating the building’s 4,200-square-foot parquet floor, which had been flooded by two feet of water.

The Straight Theater had a 40-foot-high screen with full projection and sound booths, with a capacity of 1,400. In its first three weeks of life, it hosted a poetry reading, a play, and a Grateful Dead concert. The group had plans to convert the building next door, a former Masonic hall, into a dance and drama school, photo studio, and arts and crafts studio. 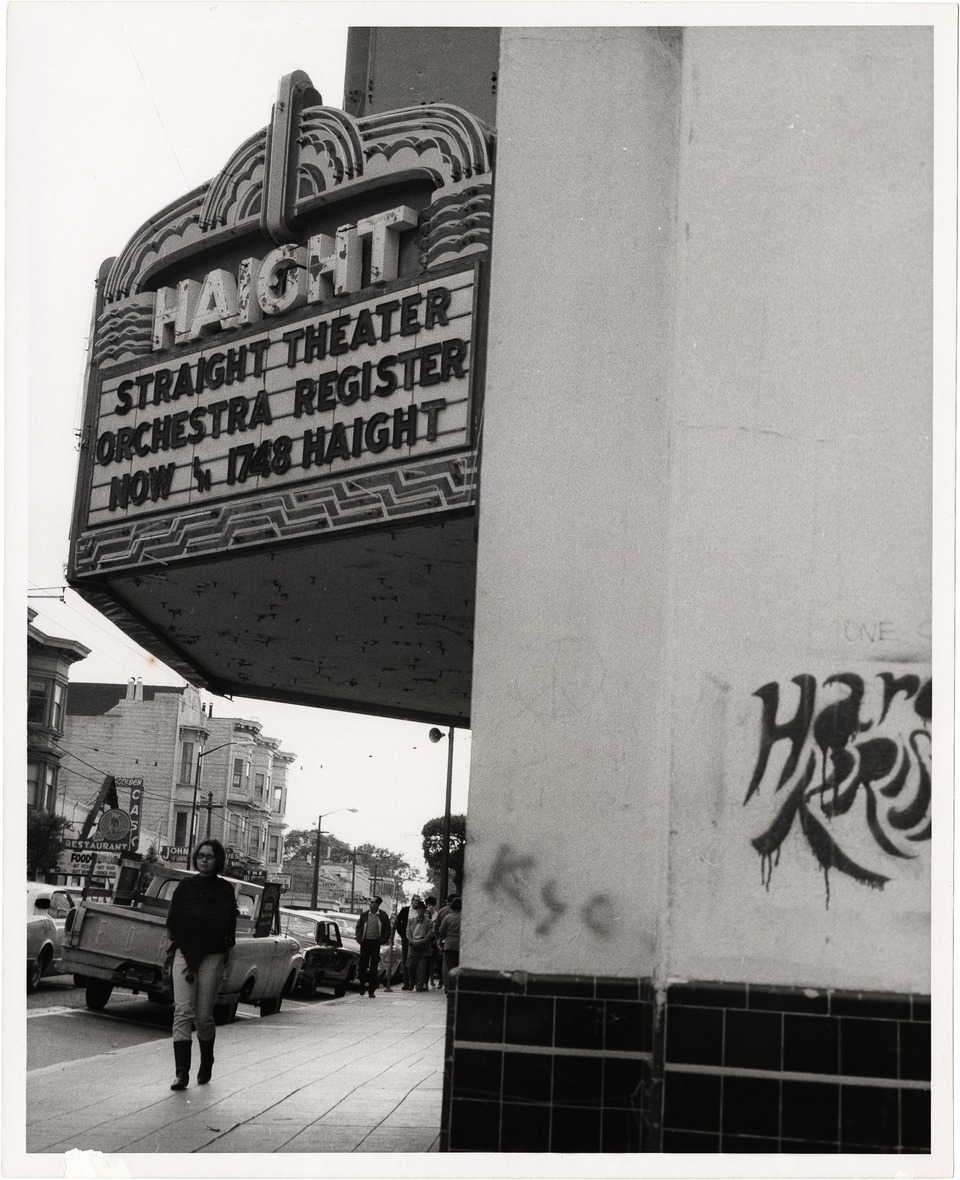 In August 1967, the Straight Theater applied for a permit to hold dances, but was denied by the SFPD. At a two-hour permit hearing at the Hall of Justice, representatives of The Straight Theater argued that the dances would bring in money that could fund other cultural programs. But local residents protested a potential influx of people into an area already filled with hippies. As the police noted, there was “a high incidence of crime when folk-rock concerts were held in other areas of the city.”

Despite the denial of their permit, the Straight Theater found a loophole. An October 2, 1967 article described crowds forming to sign up for the dance school, with the Grateful Dead setting up their equipment to play for the dance “classes.” When it wasn’t holding clandestine shows, the Straight Theater still played movies; it was the first Bay Area theater to show the Beatles’ Magical Mystery Tour. It also hosted weddings, including that of one of the owners.

On October 18th, 1967, the theater played host to a conference about runway kids, which quickly descended into chaos. Protesters angry about various issues, from the Vietnam War to police brutality against African-Americans, got into screaming matches. But the real issue ended up being a nude dance performance that concluded the conference, featuring three women and three men, which caused the police to storm the stage. Though the crowd created a curtain to allow the performers to quickly get dressed, the damage was done.

The Straight Theater held out until the summer of 1969, with a final show from Bessie Jones & the Georgia Sea Islanders. In a 1988 retrospective article, one of the theater’s owners reflected that the increased presence of hard drugs and crime in the Haight had ruined the scene at the Straight. By 1970, the Straight had been shut down and abandoned. A November 22, 1970 Examiner article on the aftermath of the Summer of Love featured photos of the deserted street outside the theater, noting that “debris lines the doorways and sidewalks, [and] parking spaces are left unused all day.” 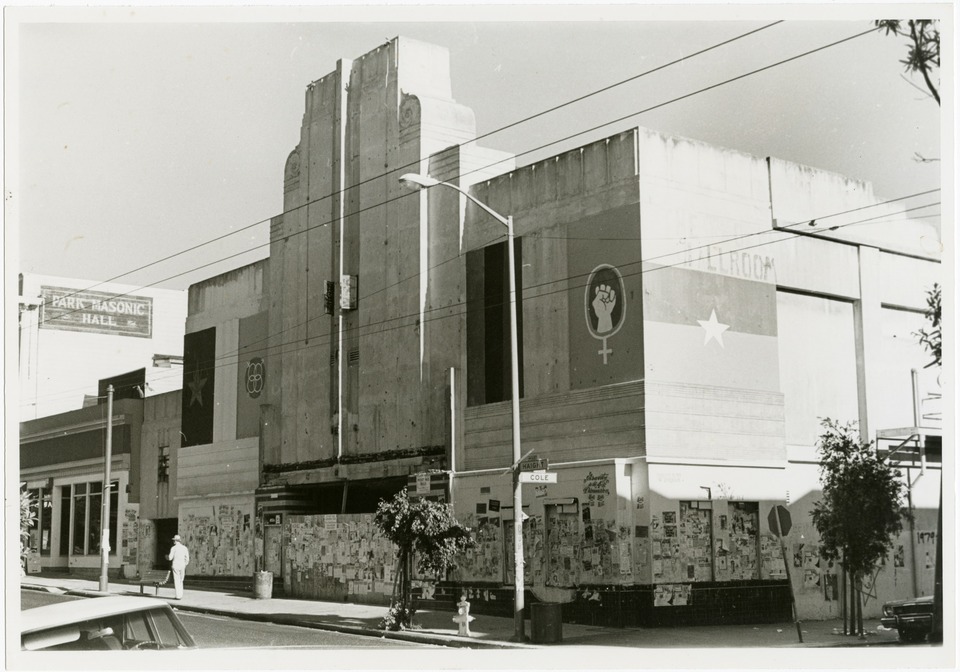 From 1969 to 1973, the Straight Theater sat abandoned. Photos from the time show posters lining its exterior, in the manner of a construction site, but no building was actually going on. In April 1973, 30 artists, dancers, and musicians staged a press conference to encourage the city to abandon the proposed $18 million performing arts center downtown and focus on neighborhood community centers instead. They argued that renovating the Straight Theater would cost the city a mere $250,000, “equal to 58 parking spaces in the proposed downtown performing arts center.”

In August 1973, the artists proposed transforming the Haight Theater, the former Masonic hall next door, and six other vacant storefronts on the 1700 block of Haight into a community center that would offer classes in dance, puppetry, painting, sculpture and music. An October 9, 1973 article noted that the Arts Commission was considering this plan, but this plan appears to have been abandoned when three architects inspecting the site were attacked by members of the White Panther Party and People’s Ballroom Coalition, who also wanted a part of the center. The idea was formally dropped, and in 1981, the Straight Theater was demolished. 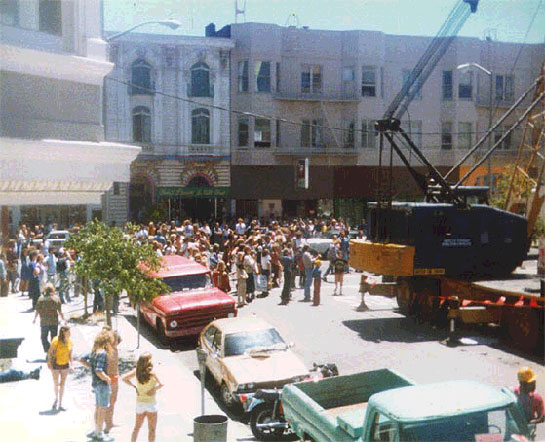 The former site of the theater sat empty until August 1987, when drugstore chain Thrifty attempted to move in. Regulations at the time prohibited new stores larger than 2,500 square feet in neighborhood shopping districts, but Thrifty, claiming they had the support of 460 “silent majority” residents, launched a $60,000 public-relations campaign.

The Haight-Ashbury Preservation Society fought the chain, arguing that the neighborhood already had one drugstore and that allowing a chain store would open the floodgates for others. Nonetheless, it were overruled by the Planning Commission, and in November 1987, the Board of Supervisors voted 6-5 to approve the Thrifty.

On the morning of September 22nd, 1988, a fire erupted at the Thrifty construction site. An unknown arsonist started the blaze by splashing gasoline over the floors and wood walls of the building; two five-gallon cans of gas were found at the scene of the fire. A Chronicle article noted that firefighters arrived on the scene to find area residents “standing around, applauding the fire.”

No one was injured in the blaze, though 10 neighboring buildings sustained $3 million in damage, and 60 people were displaced. Mayor Art Agnos offered a $10,000 reward for information leading to the arrest and conviction of the arsonist, which grew to $25,000 after a contribution from the president of the Fire Commission. Despite the reward, however, no suspect was ever found, and Thrifty abandoned its plans, noting in a statement that "recent events raise serious concerns over the ultimate safety of the neighborhood."

After the 1989 Loma Prieta earthquake destroyed Goodwill’s headquarters at Fifth and Howard streets, the charitable thrift-store organization decided to embark on a massive expansion, opening their sixth San Francisco store at 1700 Haight in June 1991. They’ve been there ever since, situated on a corner of the Haight that holds much more history than just Goodwill relics from the past.

San FranciscoUpper Haight
About 15 hours ago