Patricia's Green Gets New Grass And A Temple Addition

Patricia’s Green was a hotbed of activity yesterday morning, as renovations were made to both the lawn and the newly erected temple installation. Temple creator David Best and his team were on-site to add benches and more space for public writing, while a lawn crew worked to reseed the park's ailing lawn, which had earned the nickname "Patricia's Brown."

Though the temple was technically completed on June 26th, Best decided to make a few seating additions, including four benches that surround the temple and four more seats that extend from the center of the structure. He also attached some small shelves to the structure itself. Best said the seating was intended to be added later, but when he realized how quickly the structure had been covered in memorial writing, he decided to move up the installation to provide more space for the public to scrawl on. If the heavy volume of writing continues, Best said that he might come back again over the temple's yearlong residency to cover some of the surfaces with new blank wood, allowing fresh writing space for people just discovering the structure.

Meanwhile, the park's long-abandoned lawn was also under construction. Back in June, we reported that the lawn at Patricia's Green had been allowed to turn to dust because of water-conservation measures compelled by the ongoing drought. But yesterday and this morning, folks from Rec & Park were once again out seeding and feeding the moribund lawn. At the Hayes Valley Neighborhood Association meeting on July 23rd, SF Rec & Park district manager Steven Cismowski reported that the irrigation system at Patricia’s Green, which had not been functioning since the end of 2014, was now operational. This may explain the department's renewed efforts to fix up the lawn. The last time bald patches began to appear on the lawn, sod was used to regenerate the grounds; it's not clear why seeding was the chosen method this time. Cismowski said that both sections of the newly seeded lawn will be fenced off for at least six weeks, to protect the new seedlings. While that seems like a long time to go without a lawn, he noted that by reseeding both sections at once, the overall "downtime" of the Green will actually be shorter than if the department did them one at a time. The Hayes Valley Neighborhood Association is asking neighbors to be patient while the lawn goes through the reseeding process.

Even with this new round of seeding, it's still an open question whether this rejuvenation will be effective in keeping the Green, well, green.  According to public space landscapers, one of the biggest threats to healthy grass in public spaces is the nitrogen content of dog urine, and because of its small size and central location, the Green sees a higher-than-average amount of animal waste. As always, the city is asking neighbors to be sure to pick up dog poop and trash, and deposit it in the appropriate receptacle; this also helps to dispel the rats that have been seen in the park in recent months, hunting for sources of water. 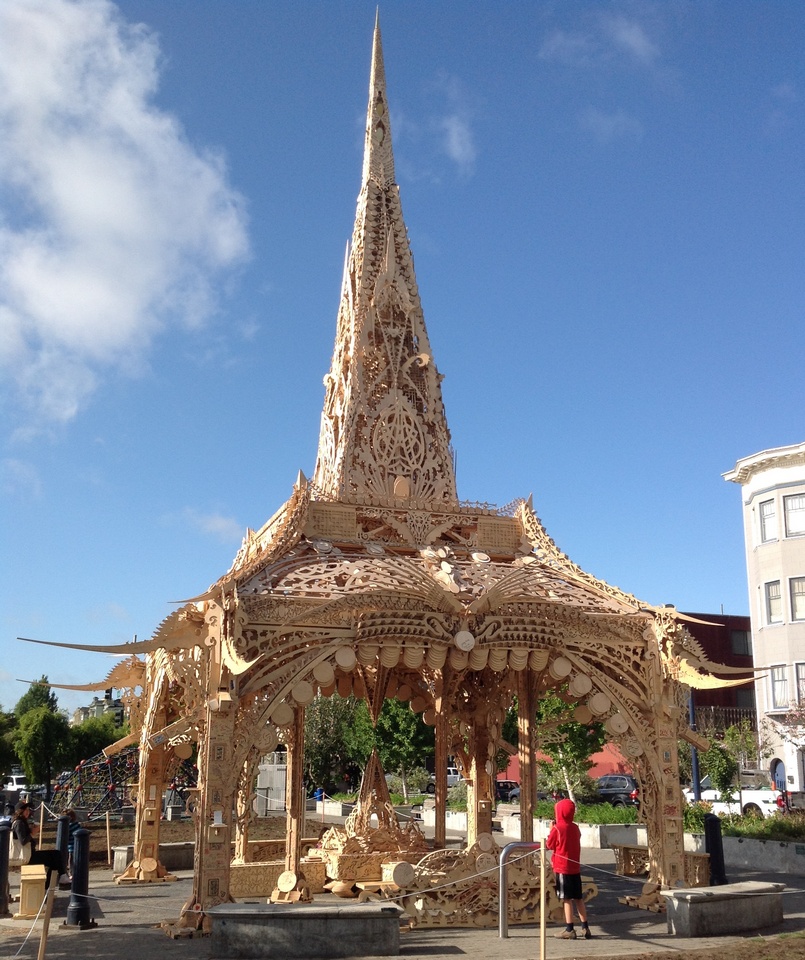 What do you think of the additions to the temple? Will the new lawn be able to succeed where the old one failed? Let us know in the comments.