The Lower Polk Neighbors (LPN) group hosted a meeting on Wednesday to discuss the proposed upgrades. About 20 neighbors, including residents and business owners, met at The First Congregational Church of San Francisco (1300 Polk St.), with LPN President Andrew Chandler presiding over the event. Representatives from the San Francisco Department of Public Works were in attendance to present three proposals for a redesign of the space, as well as to hear feedback from neighbors. 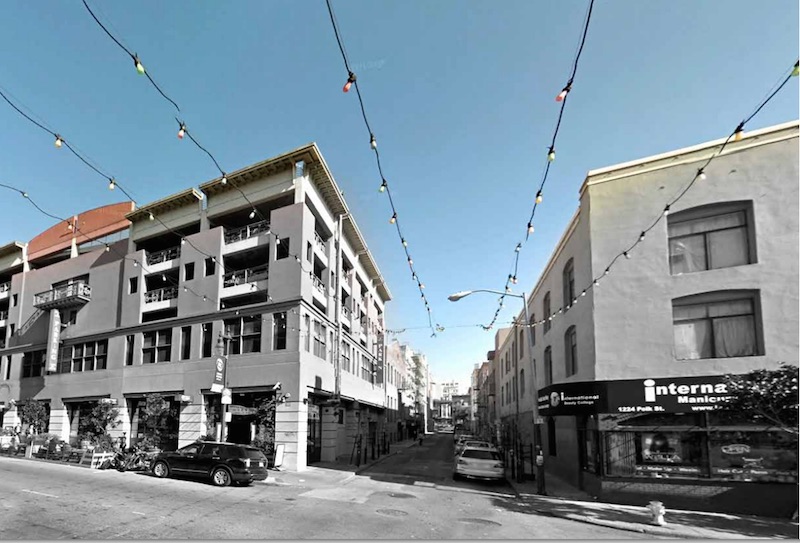 The project is the first step of the larger Polk Alleys Project, which will see a total of 12 alleys along Polk Street get remodeled to some degree. The goal of the upgrades is to reclaim the alleys as public space and invite the public to use them as recreational zones. The extent of renovations will vary based on each alley, but the team hopes to set a strong precedent for meaningful change with the Fern Alley project.

Each of the proposals for Fern Street would utilize a combination of elements toward the goal of enticing the public down the currently uninviting alley: these include asphalt printing (similar to the painting process utilized for crosswalks), increased lighting elements, and metallic screens that would close of "niches" in the alley to deter surreptitious activity. 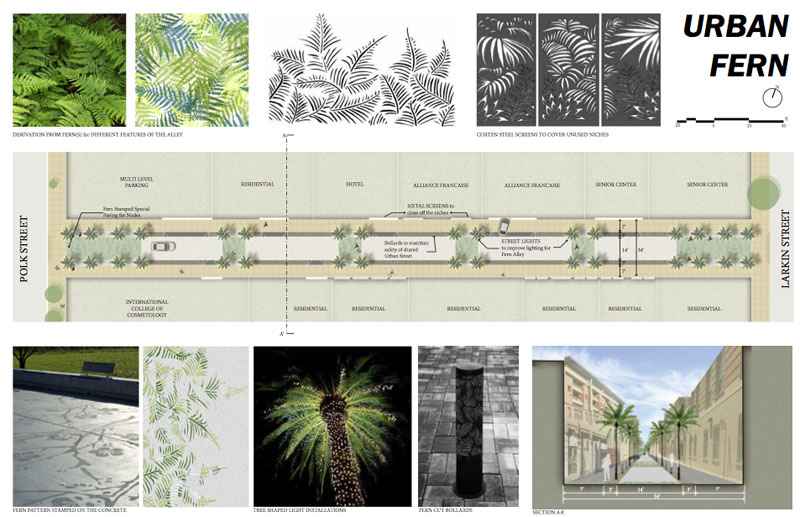 The first proposal, entitled "Urban Fern", would "lean into the plant theme" of the street's name. The design would utilize illuminated plants to light the space at night and would include several "activation zones" to encourage recreational usage. Ketterer was deliberate in mentioning that the illuminated plants would be "fern-like", but they would need to be more drought friendly than the notoriously thirsty fern. 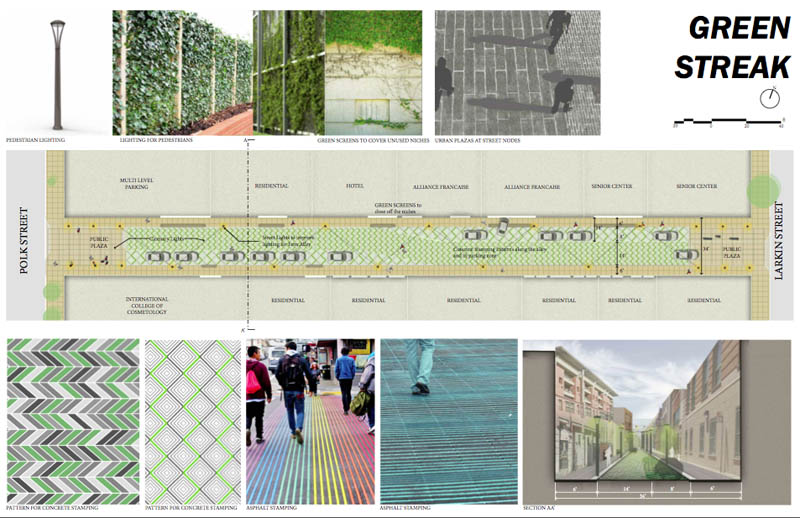 The second design presented, "Green Streak," is a literal invocation of the concept of "green space," with minimally invasive design elements. This concept would focus on leaving the space relatively open and uncluttered, but utilizing green printing on the asphalt, climbing plants and vines on the alley walls, and increased overhead and street lights to discourage use by cars and encourage a more relaxed and inviting space for pedestrians. 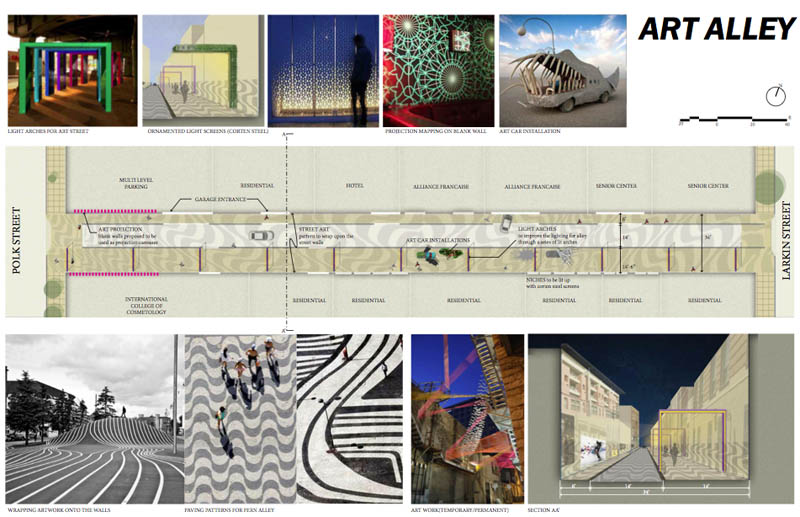 The third presentation, "Art Alley," would embrace Polk Street's vibrant arts scene. One popular element from this proposal would be the creation of an arched, illuminated walkway. Other ideas included using the edifice of the city-owned parking garage at the west end of the alley to project light installations, and keeping Burning Man-style art cars parked in the alley on display.

The proposed changes would likely see parking from the alleys eliminated in order to promote a more pedestrian-friendly environment. Initially, designs for "Green Streak" left parking spaces in place but the designers found that community response consistently supported removing parking. The street would still be available, however, for limited usage by cars and would remain in compliance with city ordinances around accessibility to emergency vehicles. 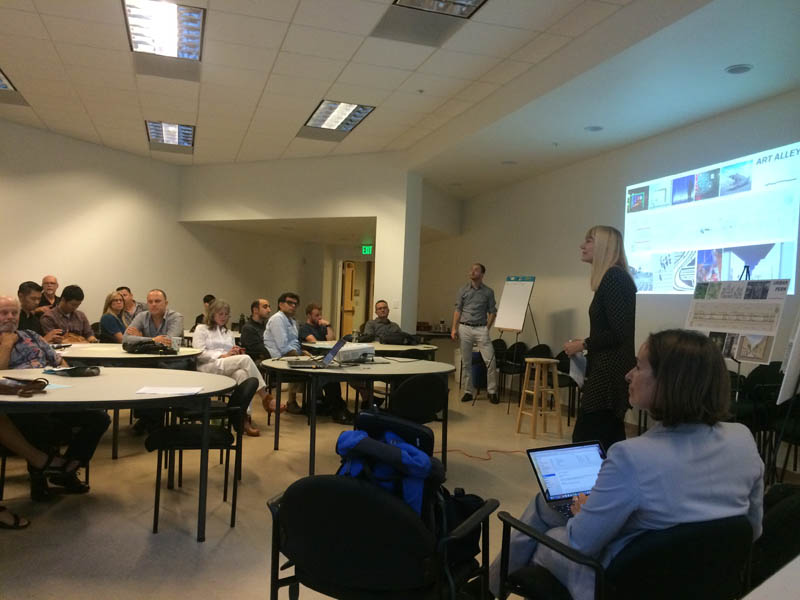 As Wednesday's meeting progressed, neighbors and designers worked on hybridizing the proposals, drawing the elements that resonated most from each proposal and integrating them. Most residents agreed on the value of increased urban greenery, and the neighborhood was characteristically fond of art in public. Dialogue was overwhelmingly positive and in favor of cooperative effort, and no one presented strong opposition to the plans.

The project is being funded with $500,000 in mitigation funds courtesy of the California Pacific Medical Center, currently under construction on Van Ness (at Geary). Of that, approximately $450,000 will be dedicated to construction.

Correction: The Polk Alleys Project is being funded with my money allotted by the city. During the meeting, LPN president Andrew Chandler stated that mitigation funds could potentially be made available to augment city funds if necessary.

City officials are hoping that the project can move forward quickly; Ketterer states that they plan to finalize the design by end of year and start construction shortly thereafter.

San FranciscoPolk
About 23 hours ago