Before Mayor Ed Lee even announced the itinerary for his 2016 inauguration celebration today, plans were already underway to crash the party.

The Justice For Mario Woods Coalition will meet on the steps of City Hall, rain or shine, at 11am Friday, Jan. 8th, before the public inauguration ceremony begins at 11:30am. Their demand of the re-elected mayor: Replace Police Chief Greg Suhr in light of his handling of the Dec. 2nd officer-involved shooting that left Mario Woods, a 26-year-old black man armed with a butter knife, dead in the Bayview.

"Mayor Lee hasn't said much about this whole situation and there seems to be an increasing number of killings by SFPD. Yet he still supports Chief Suhr, who's proven that he's not able to run SFPD," said protest organizer Yayne Abeba. "He's the one who appointed the chief, he's responsible for the chief."

The Justice For Mario Woods Coalition is backed by the Service Employees International Union Local 1021 and made up of representatives from more than 17 local organizations — including Black Lives Matter, Occupy SF, the ANSWER Coalition and Codepink. Since the protest was announced Jan. 1st on Facebook, 250 supporters have RSVP'd and more than 600 have noted their interest. 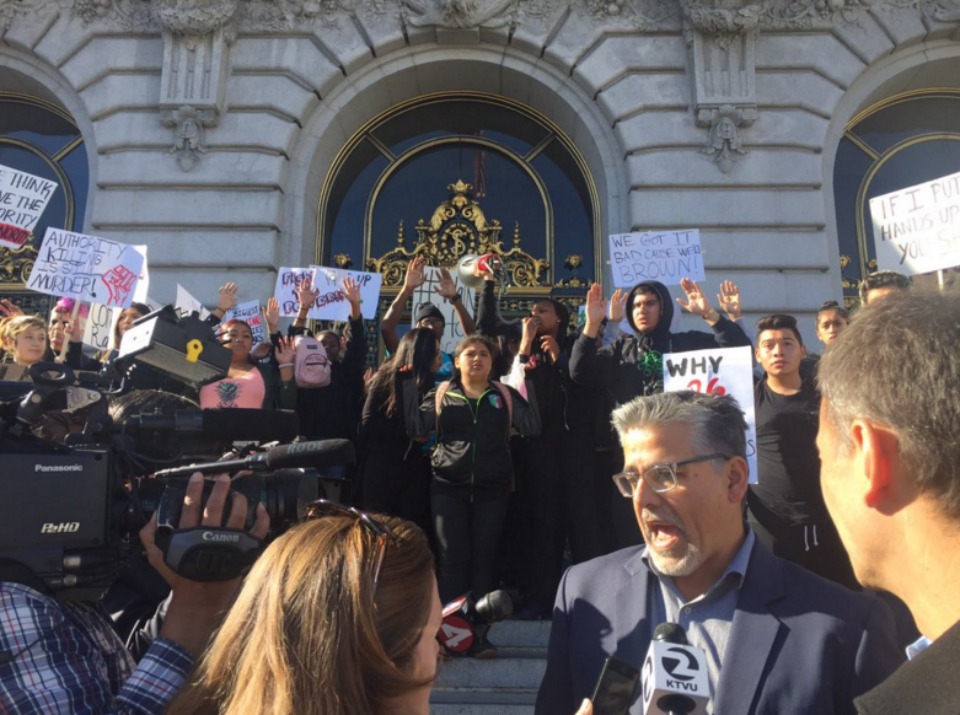 A protest held in December after the fatal shooting of Mario Woods. (Photo: KaleWilliams/Twitter)

Ahead of this week's coalition meeting in Potrero Hill, Abeba, a stand-up comedian, and co-organizer Lynn Burnett, a high school history teacher in Oakland, told us that they're not only enraged by the manner of the shooting of Woods, but by the chief's handling of the matter in the days following.

"It was a firing squad. None of it needed to happen," Abeba said. "I've watched the video over and over again and I don't see the knife they're talking about."

"A huge problem that I have is, despite having this video where it's pretty clear that Mario Woods was not acting in a threatening way, Greg Suhr immediately made a statement implying that he was. And, you know, there have been statements like this before," Burnett added, referring to the shooting of Amilcar Perez-Lopez at 24th and Folsom on Feb. 26th, 2015.

Shortly after Perez-Lopez was fatally shot by police, Chief Suhr stated that the 21-year-old was in the process of stealing a bike and lunged at two responding officers with a knife. Mission Local and other news outlets later reported that witnesses fearful of speaking with the police due to their undocumented status said that Perez-Lopez was attempting to recover his own stolen bike, and dropped the knife before he was shot. With an independent autopsy as proof, his family's lawyers have also alleged that Perez-Lopez was shot six times from behind, indicating that he was running from the scene when he was shot.

While they are aware that the department is revising its Use of Force policy, Burnett and Abeba don't think Suhr will be able to mend the divide between the SFPD and San Francisco's communities of color.

"In general, black and brown communities in San Francisco feel like Greg Suhr and the police force that he leads is not trustworthy," Burnett said. "Greg Suhr now is issuing a statement saying he's going to make a major effort toward de-escalation but that's not his practice. He's going to have to somehow turn his long-standing habits around 180 degrees in order to implement serious de-escalation," Burnett said.

"I think any elected official that really cares about the fact that black and brown communities really do not trust Greg Suhr ... if they take that seriously, and if they really care about de-escalation... I think that they would replace Greg Suhr with a different chief of police who has a proven track record of building strong relationships with black and brown communities. Instead of a strong track record of intimidating them and causing distrust," he added.

Countering that opinion, District 5 Supervisor London Breed recently told the Examiner that residents in her district, which includes the Western Addition, do trust Chief Suhr. "I can only speak to my district, but he has a history in my district of being fair,” she said.

However, she recently expressed dissatisfaction with Suhr's handling of the case to SF Weekly. "He cannot be immediately protecting his members because not all of his members are doing the right thing," she said. "I think we can do better. We have to do better."

While no district supervisors have outright supported protestors' calls for Chief Suhr's resignation—and Suhr stated today that he won't quit or retire, as some insiders anticipated—Burnett believes support from public officials will surface as pressure mounts.

"I personally feel confident that when we take action, it raises awareness and it increases pressure. I think that that has already had an effect, and I think that that will continue to have an effect," Burnett said. "... regardless of what the mayor does, I think there will be an increasing amount of public officials who support us."

"I feel like Ed Lee, if he could, would hope this just fizzles out and goes away," Abeba said. "But we're not ... the Coalition is not fizzling out."

Mayor Ed Lee's inauguration for his second term is open to the public this Friday, Jan. 8th, at City Hall. Doors open at 11am and the ceremony begins at 11:30am. London Breed will serve as master of ceremonies and California Governor Jerry Brown will administer the Mayoral Oath of Office to Mayor Lee. At 9am the following day, Mayor Lee will lead a public day of service at Ella Hill Hutch Community Center (1050 McAllister Street) in the Western Addition as part of his inauguration celebration.