The Super Bowl Host Committee has pledged to give back to the community before the big game, and North Beach's own Telegraph Hill Neighborhood Center (Tel-Hi) is one of the nonprofits that has benefited, with the construction of a new interactive play space and entrance called Happy Lane.

KaBOOM!, a Washington, D.C.-based nonprofit that helps build playgrounds in underserved communities across the country, encouraged Tel-Hi to apply for a grant from the 50 Fund, the charitable arm of Super Bowl 50. The 50 Fund selected Tel-Hi for a grant for $18,000, and using the funds, the updated entrance was installed on January 20th.

In recent weeks, the Host Committee has seen citywide opposition to the use of public funds for San Francisco events surrounding the game, most notably Super Bowl City, the free fan village at the foot of Market Street. As a result, the statues the Host Committee has placed around town have attracted a rash of vandalism, with the one in Alamo Square Park being removed outright.

But the Host Committee's critics often don't acknowledge its stated commitment to making this Super Bowl the most philanthropic ever. The 50 Fund, set up by the Super Bowl 50 Host Committee and the NFL, has raised $10 million so far, $7.5 million of which has already been distributed in grants to Bay Area organizations. Its goal is to reach $13 million, according to host committee spokesperson P.J. Johnston. 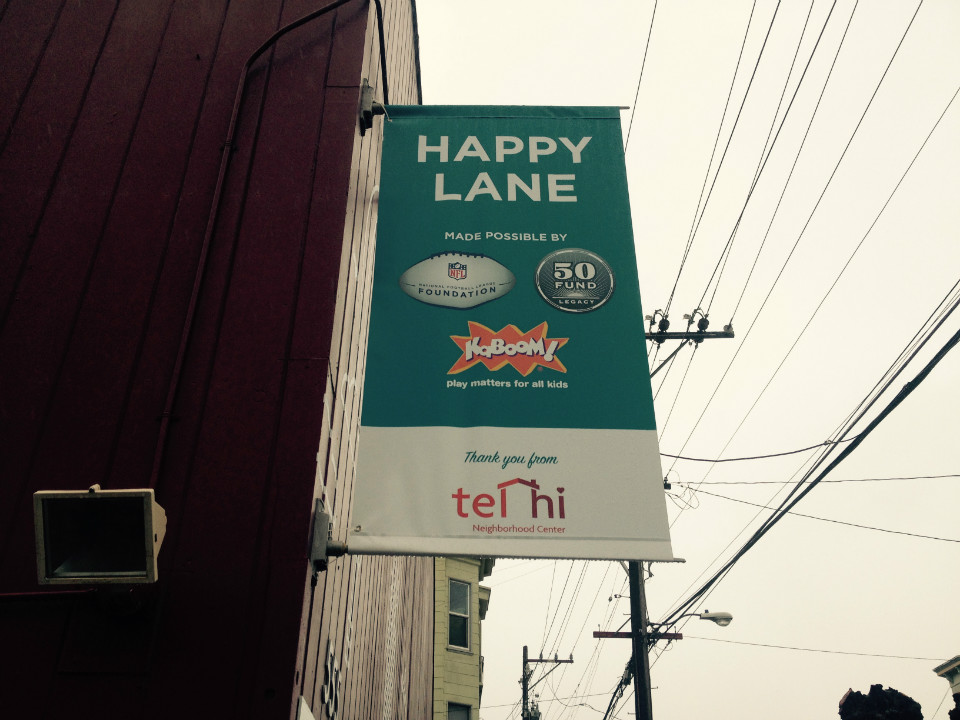 Nestor Fernandez, CEO of Tel-Hi, told us that the idea for Happy Lane was born out of the desire to create a new entrance to the center on Chestnut Street. The Tel-Hi building has an entrance on Lombard Street as well, but both entrances lacked something to attract attention, draw in more visitors and engage the community. (Tel-Hi's client base is over 700 strong, ranging from six months to 102 years of age.)

KaBOOM! is known for turning ordinary spaces into “play” spaces, Fernandez said, and Tel-Hi wanted to incorporate similar themes into the new entrance. The play element is also in keeping with Tel-Hi's mission, which focuses on recreation and exercise, nutrition, self-care and mental wellness. 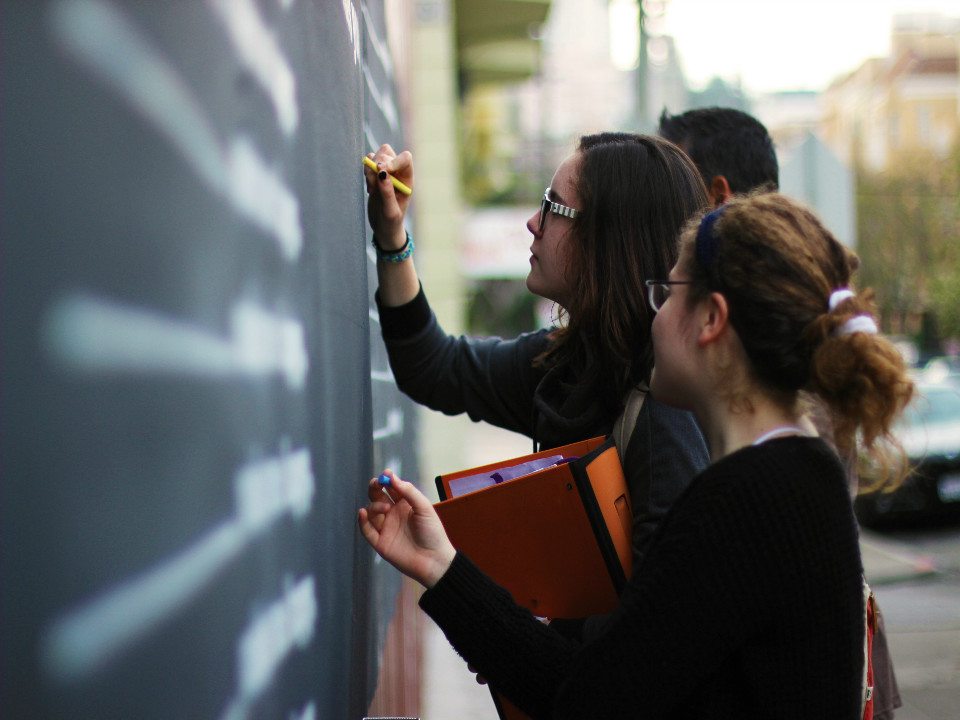 Children write answers to the question "What makes me happy?" (Photo: Corvin Macapinlac)

Happy Lane has two components. On the right side of the building is a community chalkboard wall with the question “What makes me happy?” inscribed throughout. People walking by can share their answers by writing on the board. The left side is a “Happy Par Course,” which encourages passersby to take a break by doing jumping jacks, squats and other exercises.

The blackboard has been popular with both tourists and locals, who have filled it with messages. “It’s good for community members to see different messages, such as ‘Disconnect from your computer,’” Fernandez said. “It’s a great way to communicate with the community.”

“[The entrance] encourages spontaneous play, and shows people that they can participate in these healthy behaviors," said Corvin Macapinlac, a marketing and communications specialist at Tel-Hi. "I've already seen people riding their skateboards by and stopping to take photos." 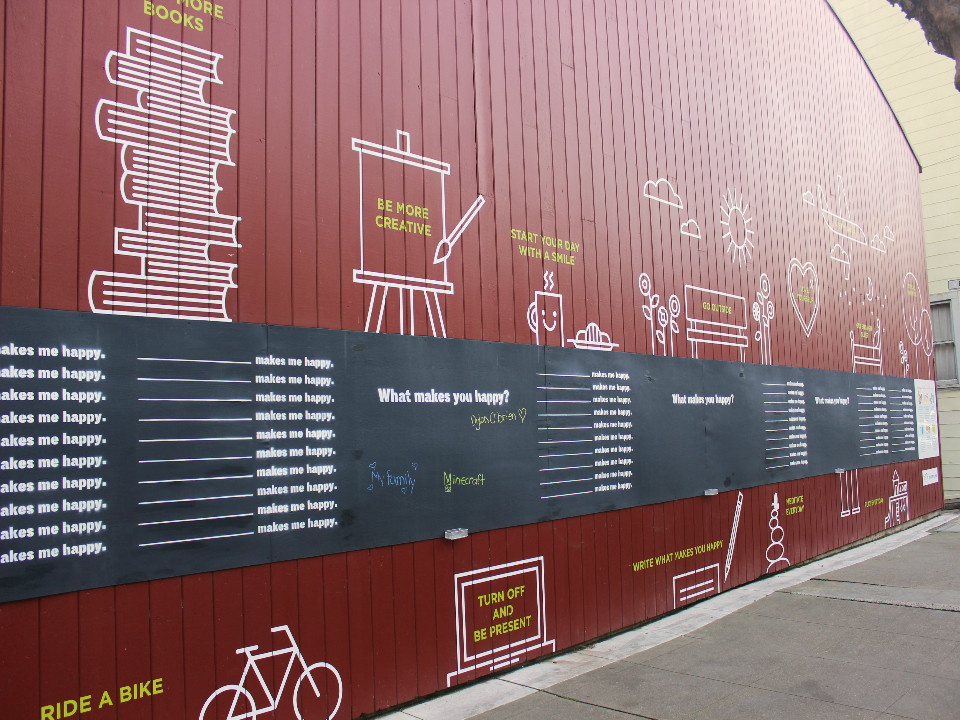 The "What makes me happy?" wall. (Photo: Corvin Macapinlac)

To make the entrance more inviting, Tel-Hi had the trees outside trimmed down and covered with colorful burlap sacks. It hired a design firm to map out and design the walls, including the line drawings and inscriptions, and has purchased other supplies, such as the chalkboard paint that now lines the right side of the building. Fernandez believes the work, which is nearly complete, will go only slightly over budget, at a likely price tag of $21,000.

Representatives from the NFL have already paid a visit to Tel-Hi to see the new entrance, and Fernandez told us that they said they were pleased with the results, calling them a model of what the grant program represents.

While the new entrance is only required to be on display for two months, per the rules of the grant and the NFL, Fernandez hopes to keep it up even longer. They may change the question on the chalkboard to “When I grow up, I want to be…” at a later date, to further the conversation and keep the neighborhood engaged in their vision.

You can follow Tel-Hi's progress in the campaign they've dubbed “30 Days of Happiness” on Facebook and Instagram. If you're posting a photo, use the hashtags #thirtydaysofhappiness and #happylane.