Trees Downed Across The City After Weekend's Big Storms

After a month of dry weather, El Niño returned with a vengeance this weekend, complete with a flash flood watch. All in all, the storms drenched San Francisco with 2.37 inches of rain over the course of the weekend, according to the Chronicle, with as much as 10 inches in other parts of the Bay Area.

That was bad news for the already beleaguered local street trees, many of them weakened by drought. Here are some of the fallen trunks and lost limbs seen around town as the wind and rain blew through.

The most notable incident occurred in Presidio Heights on Friday afternoon, where a 30-foot tree came down on two cars and a 33-Ashbury bus. No one was injured:

But there were lots of other trees downed around town, including this one blocking a sidewalk at 9th and Judah in the Inner Sunset on Sunday morning:

Golden Gate Park saw its share of downed limbs, as seen in the photos below, taken at the intersection of MLK Drive and Music Concourse Drive yesterday: 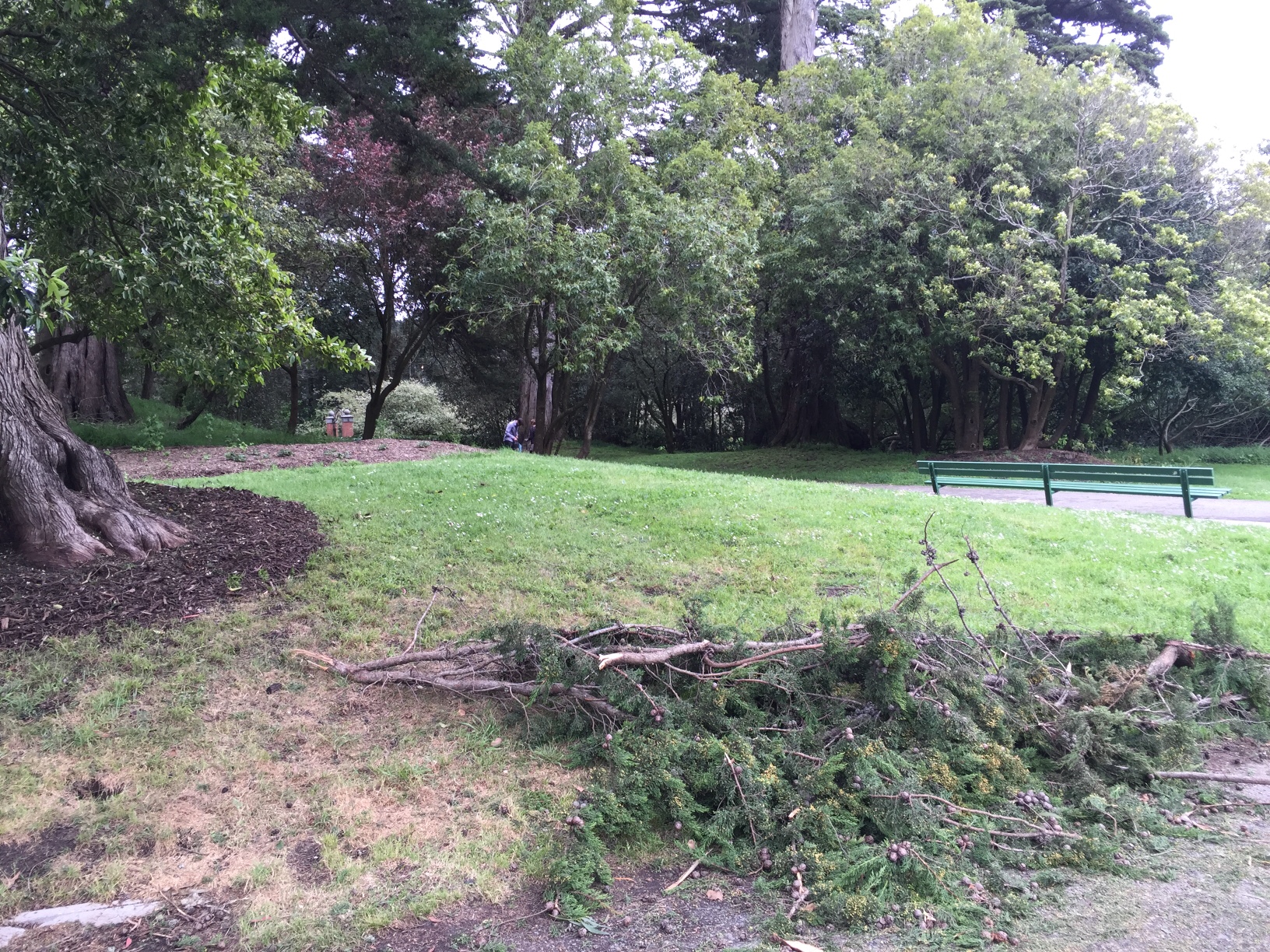 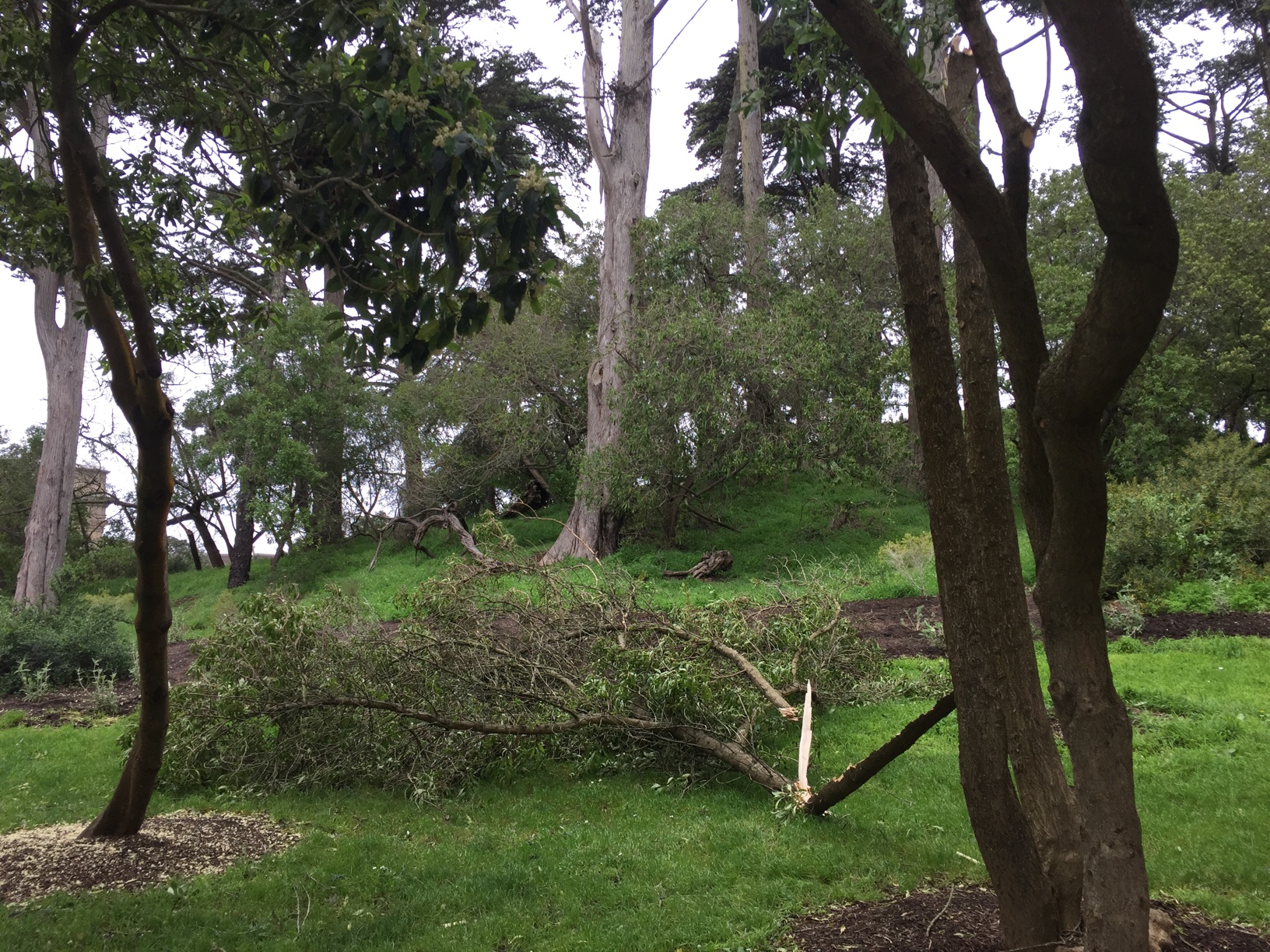 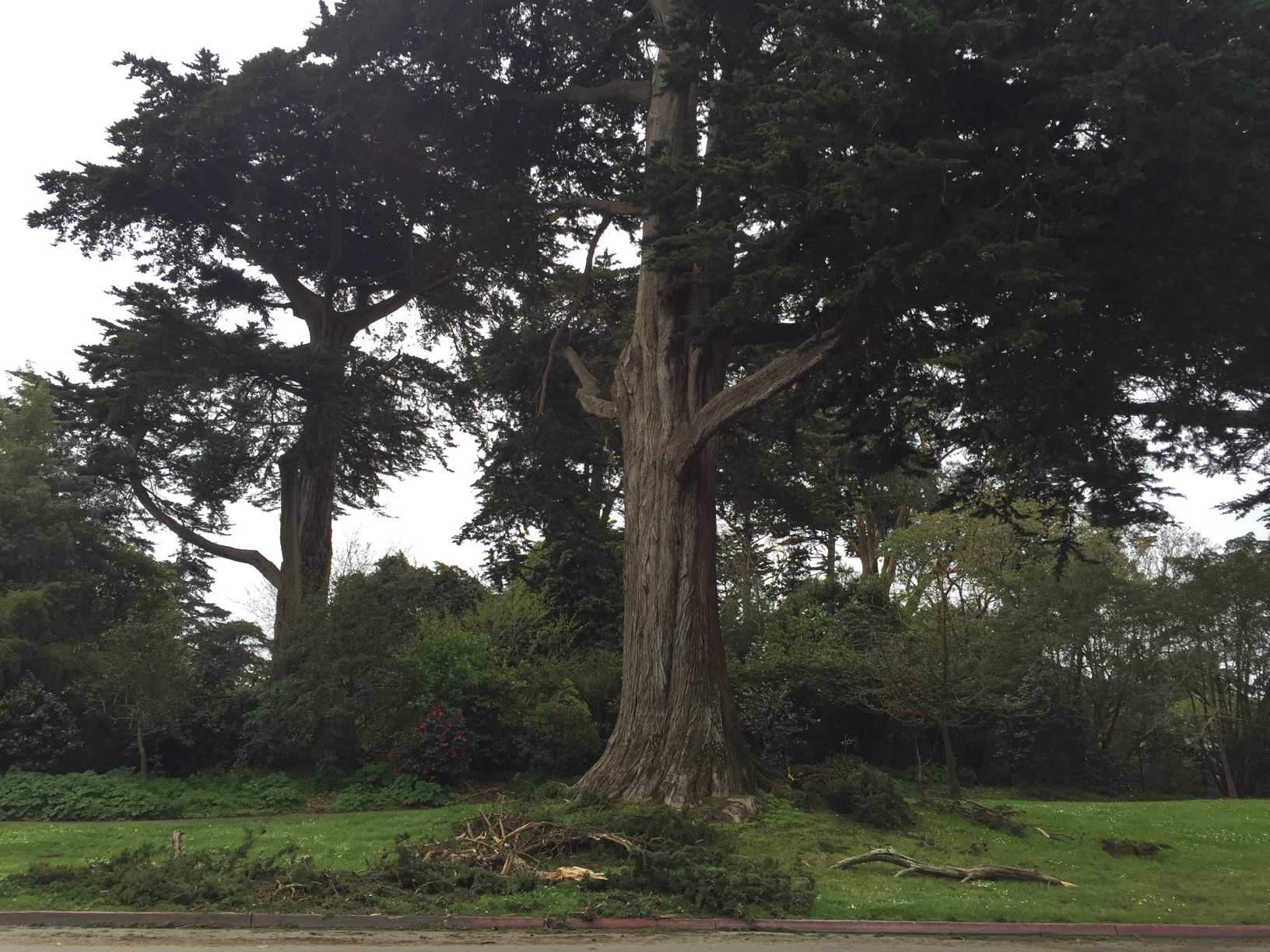 Over in the Upper Haight, piles of fallen branches were amassing at Haight near Clayton on Sunday afternoon. (Update: A commenter says they were actually two fallen trees that had damaged parked cars, and were awaiting removal after they had been cut into pieces by work crews.) 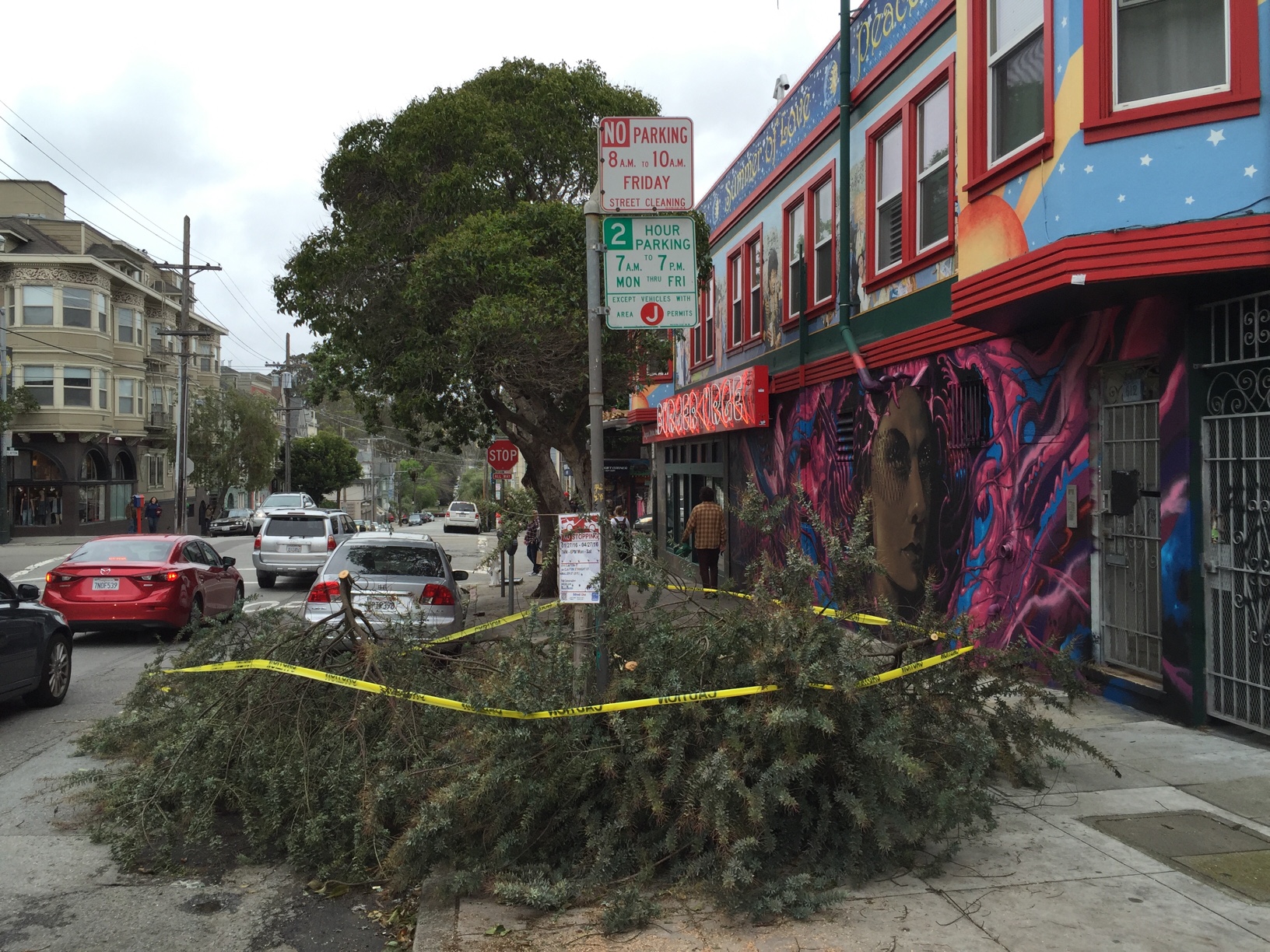 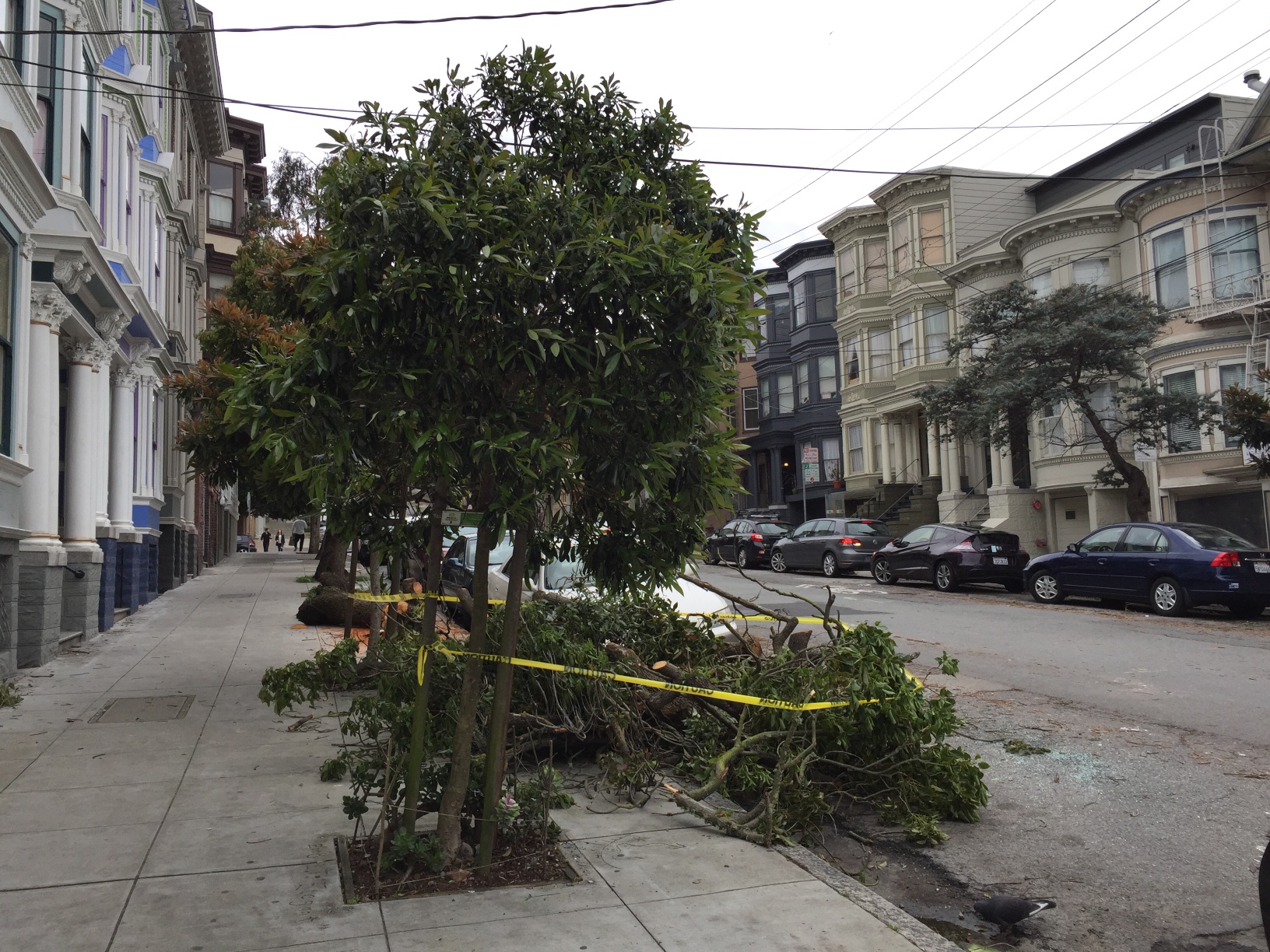 Meanwhile, in NoPa, a tree went down in the street on Ashbury between Grove and Hayes, though the parked car beneath it luckily escaped damage.

Duboce Triangle saw two mature trees go down, which had to be removed with chainsaws:

@hoodlinesf Second mature tree down in Duboce Triangle, across from L'Ardoise. SFFD on scene with chainsaws. Sad! pic.twitter.com/o6cJ7NX4Zs

Finally, tipster Chris D. sent photos of two trees that fell in Golden Gate Park. The first was a massive eucalyptus that fell near the Big Rec Baseball Diamond around 4am this morning. "It took the flagpole with it," he said. 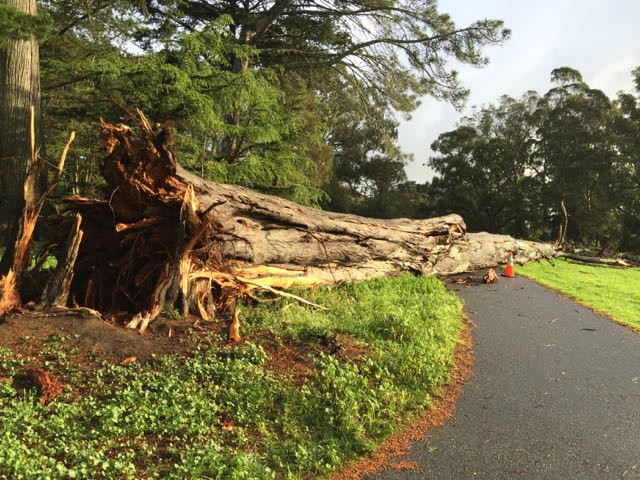 Meanwhile, in Sharon Meadow, a large cyprus had also fallen. 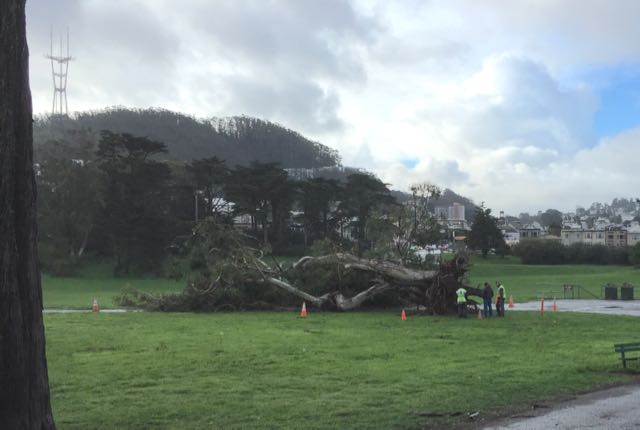 Did you see any notably large or destructive tree falls in the city over the weekend? If so, send us a tip (photos are especially appreciated).