As we reported last week, the long-awaited, upgraded escalators at the Castro Muni Station will now include a surprising effect: rainbow lights. The lights’ installation came as a surprise to many, as previous comments from SFMTA indicated that visually, the new escalators would look the same as the old ones.

According to SFMTA, the escalators, along with their rainbow lights, will be up and running as early as next week.

The Castro Station escalators date back to 1972 and, prior to current upgrades, had been plagued with frequent breakdowns. As we reported last February, bids for the second phase of the larger SF Municipal Railway’s Escalator Rehabilitation and Upgrade Project came in at nearly twice the originally projected engineering cost, pushing back the project’s completion to the end of 2018. The second phase of the project includes the four escalators at Castro Station.

According to SFMTA spokesperson Paul Rose, the installed rainbow lights added no additional costs to the overall cost of the escalator project, and the lighting feature did not contribute to the project’s delay. Regarding the decision-making process behind the LED’s installation, Rose told us:

There has been significant outreach with the community regarding this escalator project, but there wasn’t a specific discussion about the lights. This is a case of our testing the capabilities of the new lights, liking what we saw, and making a decision to keep them that way. We’ll monitor the situation and make changes, if needed.

According to District 8 Supervisor Scott Wiener, who only heard about SFMTA’s decision recently, the rainbow LED lights can easily be turned on and off to replace the usual white lights on the escalator. “It’s simply an option,” said Wiener. “One that I think is a great idea.” 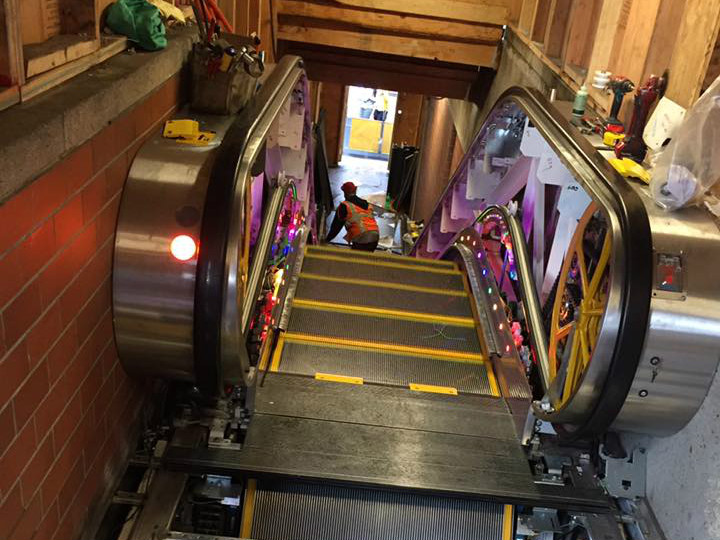 Wiener reacted positively to SFMTA’s announcement. He shared his thoughts with us:

It's a great idea to use rainbow LED lighting along the Castro Station escalators. Harvey Milk Plaza is at the heart of our neighborhood, and sending a clear message about our neighborhood's identity as an LGBT haven is powerful. We've worked hard to make our great neighborhood even better, including the Castro Street sidewalk widening and streetscape project, the strengthening of the GLBT History Museum, and the opening of Strut, our new health center. We have more work to do, including transforming Harvey Milk Plaza into a usable, culturally relevant, and beautiful space. For now, though, adding a beautiful rainbow touch to the escalators is a step forward.

The news received mixed reviews from Castro residents. Following the story that we published last Friday, readers shared their thoughts on SFMTA’s announcement with us:

"How about we get the escalators to work first before we decorate them?"

"OMG! This only adds to the Disneyfication of the 'hood. Well, at least the tourists will be amused and delighted (pun intended)..."

"If they had extra money, they should have used it to protect the elevator from the elements (and homeless) when not in service."

"I'm so excited about this, I jizzed glitter."

"Yes, the escalator at Church Street station hasn't been working for six weeks now...but they have time to bedazzle Castro Street escalators ..Arg!"

"I am so over the rainbow!"

Andrea Aiello, Executive Director of the Castro/Upper Market Community Benefit District, admitted that she was surprised when she saw the photos of the rainbow escalators on Hoodline last week. “It’s nice to see MTA being creative and thinking about augmenting the public space,” she said. “I’m sure once they are unveiled, they will look great and add another dimension to the Castro Station.”

Longtime Castro resident and activist Cleve Jones had this to say: “I think we need to spend less money decorating the streets and more money housing the people that are living on them.”

What you think of the escalators' rainbow LEDs? Tell us in the comments.