The 27-Bryant bus route will restart on January 23, 2021, on a realigned route that aims to speed up service while still improving access to low-cost food and healthcare options for Tenderloin residents.

The line, which connects the Tenderloin to its closest hospital, Saint Francis Memorial Hospital, and the lower-cost grocery stores in the Mission, was one of the 72 routes curtailed by the San Francisco Municipal Transit Agency (SFMTA) during the pandemic. The agency was struggling to find enough buses to run all 89 of its normal routes while still providing riders the needed space to socially distance to minimize the spread of COVID-19, and also seeing drastic reductions in ridership — and fare revenue — due to the shelter-in-place orders. So last April, it reduced service significantly to focus bus availability on 17 “core” lines and three light-rail lines, which were shut down in March for long-needed maintenance. 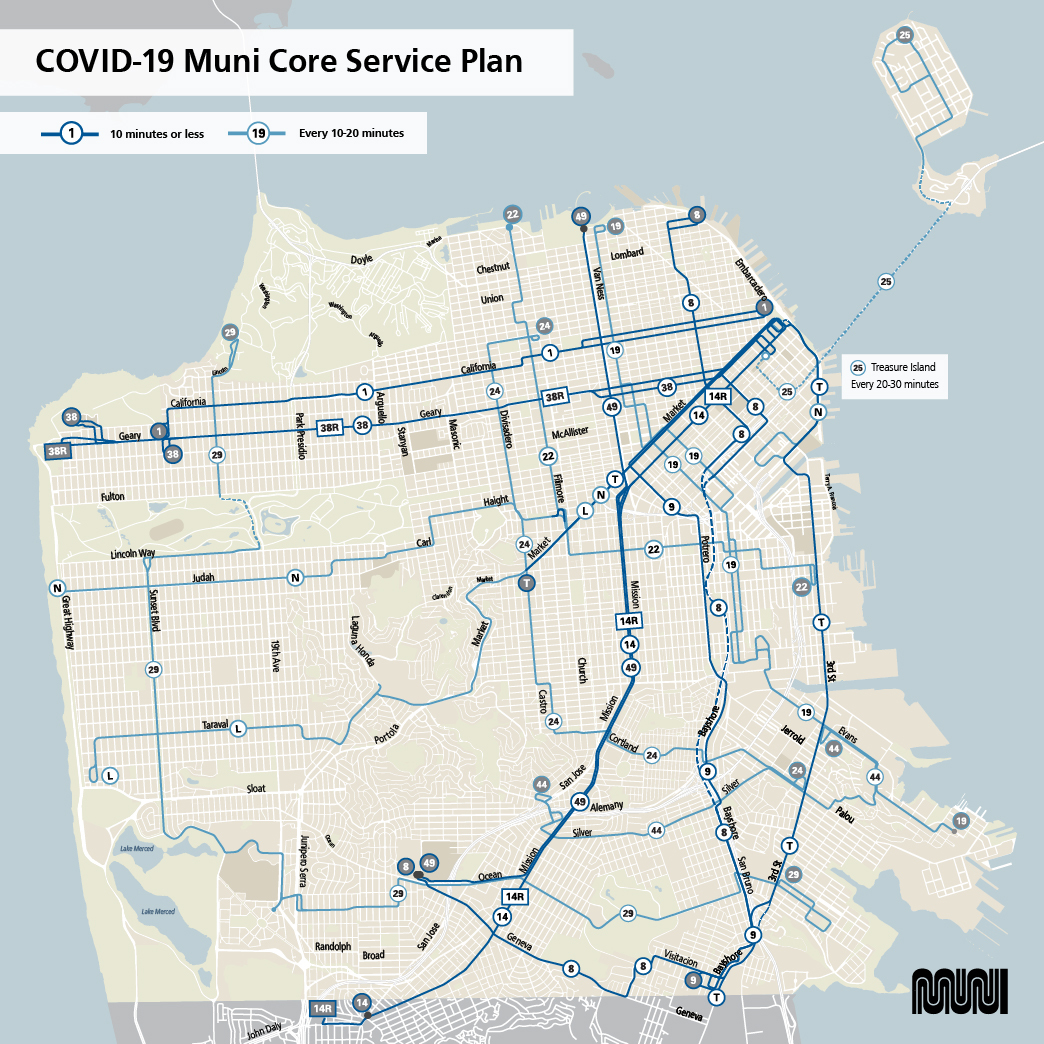 As reported by the Chronicle, in December, the loss of the 27-Bryant specifically impacted Tenderloin residents that rely on it to get to healthcare appointments and the nearest affordable grocery store, Foods Co. The 31-Balboa route, the only other line to run directly through the Tenderloin, was also among the non-core routes SFMTA temporarily discontinued last year.

The 27-Bryant was initially expected to restart last fall, when the Muni light-rail system was anticipated to go back into service. But because the Muni Metro lines had to be reverted back to bus shuttle service just three days later, the buses needed for the 27-Bryant were not available, according to SFMTA.

SFMTA has now identified the necessary resources to restart this “essential lifeline” to the Tenderloin and SoMa communities, but the route will relaunch on a modified route, the agency said in a blog post late last year.

Rather than go down Ellis, Eddy, and 5th Streets, which were narrow and often congested with traffic, SFMTA will utilize already-authorized temporary emergency transit lanes on 7th and 8th streets. The lanes on 7th and 8th streets were approved on June 30, 2020, and have already been implemented as part of the 19-Polk Temporary Emergency Transit Lanes Project, according to SFMTA spokesperson Erica Kato.

The new line will travel directly from the Tenderloin to Foods Co. and Costco in SoMa, and includes a stop only two blocks away from the Mission Food Hub, which provides free groceries to nearly 7,000 Latino families weekly, and hosts a free drop-in COVID testing site.

Once it is back in service, the 27-Bryant will run between the hours of 5 a.m. and 10 p.m. daily, with an estimated frequency of every 15 minutes on weekdays and every 20 minutes on weekends, Kato said.

While the reroute that utilizes the emergency transit lanes is currently only temporary, SFMTA has been considering strategies to reduce the historical congestion issues and a permanent realignment of the 27-Bryant since 2019. The agency’s staff will continue meeting with Tenderloin, SoMa, Mission, and Nob Hill community residents and advocates to “get feedback directly from customers,” during the emergency operations period, Kato said. SFMTA will be posting an online feedback form to gather input on the current route on its blog post after service resumes on January 23, and Muni customers are also encouraged to provide feedback on the route realignment through SF311 inquiries or SFMTA.com's Muni Feedback form, she added.

San FranciscoMissionSoMaTenderloin
About 2 hours ago