Part of Burnett Avenue would be closed to vehicle traffic at all times under SFMTA's Twin Peaks 4 All proposal | Image: SFMTA
By Carrie Sisto - Published on January 22, 2021.
San FranciscoTwin Peaks

SFMTA staff are recommending reopening more than half of Twin Peaks to cars, despite broad public embracement of the park for non-vehicle recreation.

Comments on the recommended proposal, which would permanently reopen the Portola gate at the southern end of the park for vehicle access, are due on February 5, 2021.

Early in the COVID-19 citywide shutdown, the SFMTA restricted access to Twin Peaks by personal vehicles to reduce overcrowding at the popular lookout point. According to SFMTA data, Twin Peaks Park usage by hikers, joggers, and bicyclists “increased significantly with an average of over 800 visitors each weekday and over 1,100 on the weekends."

Due to complaints by those unable to reach the park through their own mobility options, the tourism industry, and neighbors losing access to nearby parking options, SFMTA reopened the southern gate to the park at Portola Drive in September 2020. Since then, staff issued a survey seeking public feedback on several proposed options for access to the park and received more than 1,700 responses. 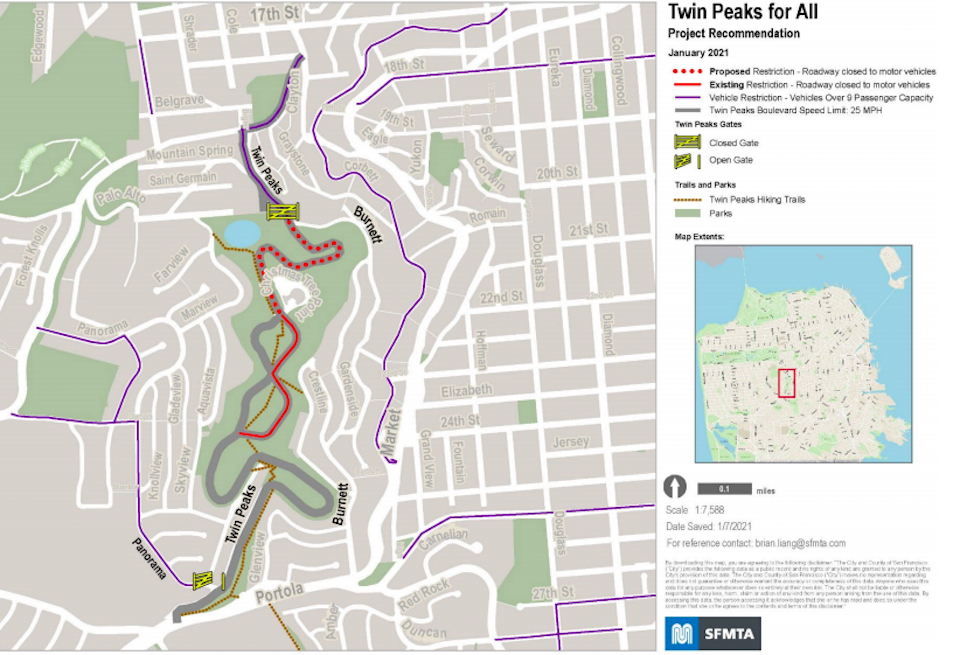 The choice of “Option 2” that was offered on the survey came after staff analyzed months of parking patterns and park usage data, as well as input provided through the survey. In its report on its recommended option, staff said it’s an improvement from the “Pre-COVID” option that simply preserved the eastern half of the park for pedestrian and biking traffic.

“A key benefit of the Portola Drive option is that it provides continuous pedestrian access, free from vehicles, from the north side of Twin Peaks,” according to SFMTA staff. “Prior to the full pandemic closure, this was not available except on-street, in the shoulder of Twin Peaks Boulevard and adjacent to moving vehicles.”

The proposal to permanently close the vehicle access gate at Burnett Avenue includes plans to improve pedestrian access into the park and the addition of signage directing vehicles to the Portola Drive gate. SFMTA staff say Option 2 was selected in collaboration with the San Francisco Fire Department, the Recreation and Parks Department, and Public Works to “ensure access and balance needs.”

According to the San Francisco Bike Coalition, a different option that would have closed the Portola Drive Gate and left the Burnett Avenue gate open 24/7 was favored by 52% of survey respondents. That option would have kept a much larger portion of the park car-free. 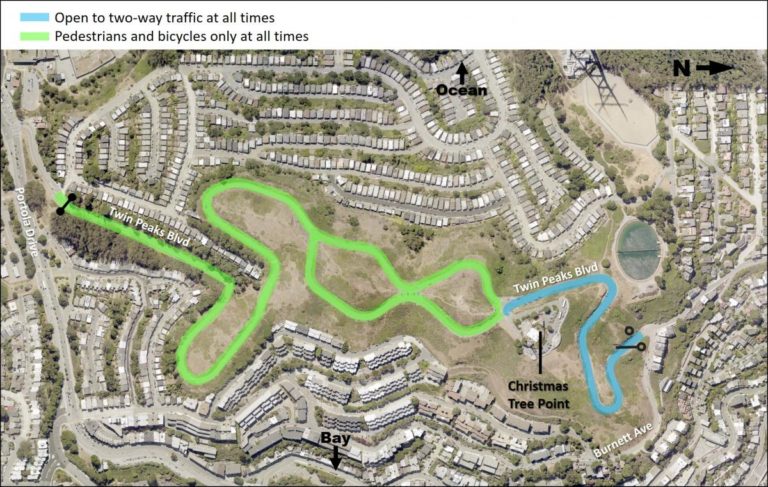 Any next steps to permanently close either gate would have to be approved by the SFMTA Board of Directors, and the issue hasn't yet been placed on a Board Meeting agenda. In the meantime, you can share your opinion by emailing [email protected] by February 5.

San FranciscoTwin Peaks
About 3 hours ago

Hoodline
About 3 hours ago