There is now a crowdfunding campaign to raise funds for the restoration of the Castro's nearly 25-year-old The Hope For the World Cure mural at 16th and Market streets.

The campaign is a partnership between District 8 Supervisor Rafael Mandelman and Susan Cervantes, founder and executive director of Precita Eye Muralists.

As Hoodline previously reported, the mural was defaced by graffiti last year, and the restoration of the mural was uncertain at that time. 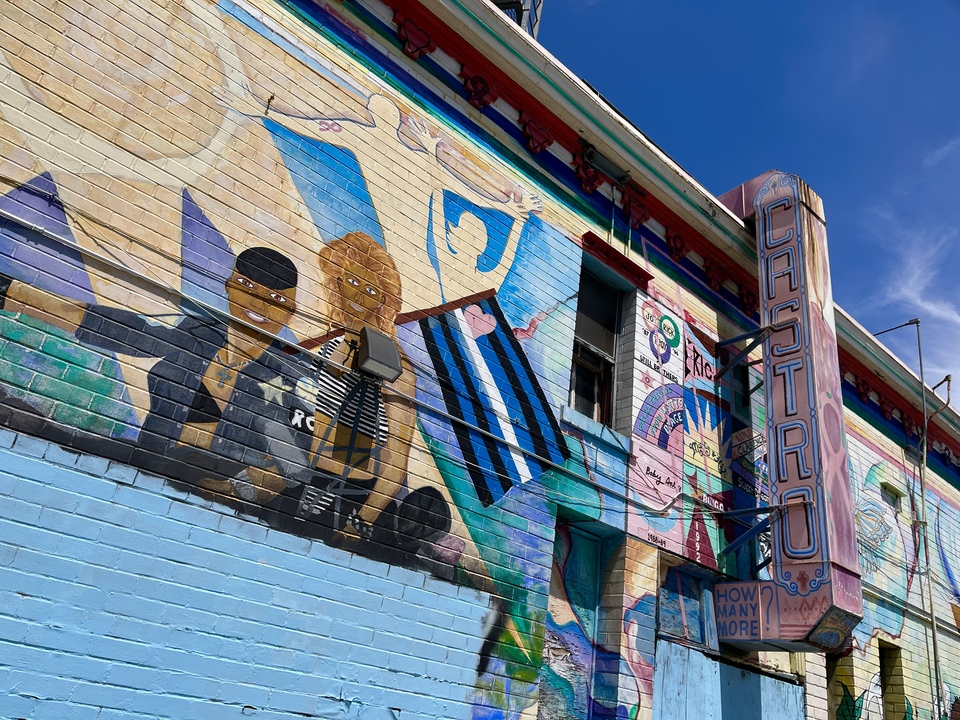 The GoFundMe campaign seeks to raise $55,000 to pay for that restoration. As of publication, the campaign has raised $1,400.

According to Mandelman, the GoFundMe was started because city funding would require an extensive Arts Commission approval process, and would take longer to be administered through the annual budget process than a privately funded restoration. 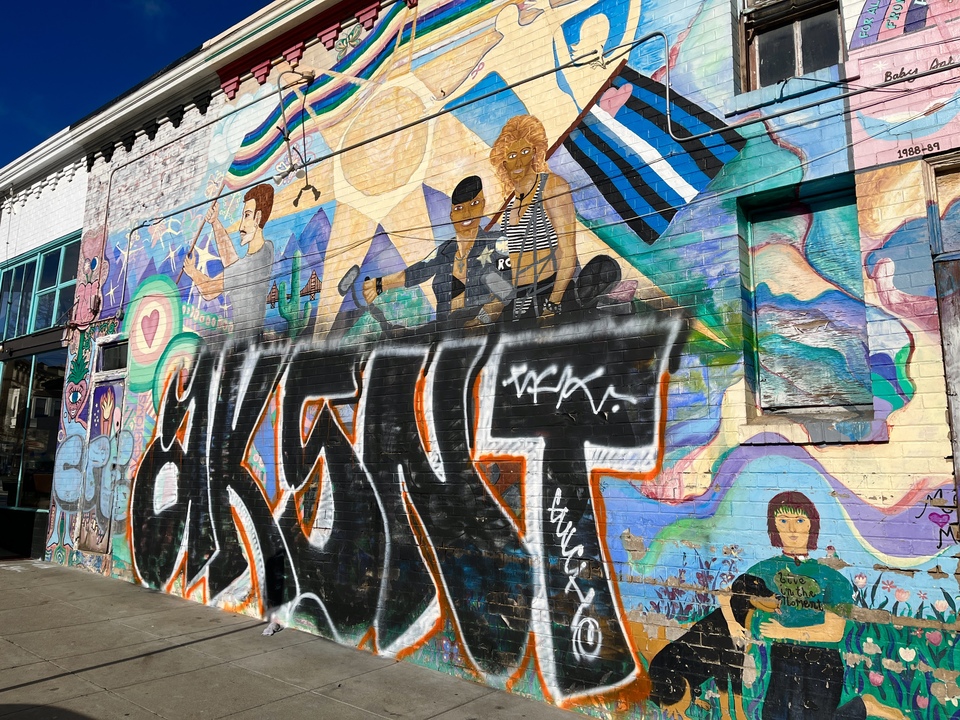 The Hope for the World Cure was painted on the back wall of what was then Bagdad Café (2295 Market) and most recently Castro Republic. The Castro Republic space has sat vacant since 2020 and the adjoining retail space, once occupied by Harvest Ranch Market (2285 Market), has been vacant since 2018.

The community mural workshop was a collaboration between Precita Eyes Muralists and Art From The Heart Heals, and was made possible through a grant from the San Francisco Arts Commission.

Last year, a large section of the mural depicting Dykes on Bikes and a male figure carrying a Rainbow Flag were tagged. Other portions of the mural were also tagged with smaller amounts of graffiti. 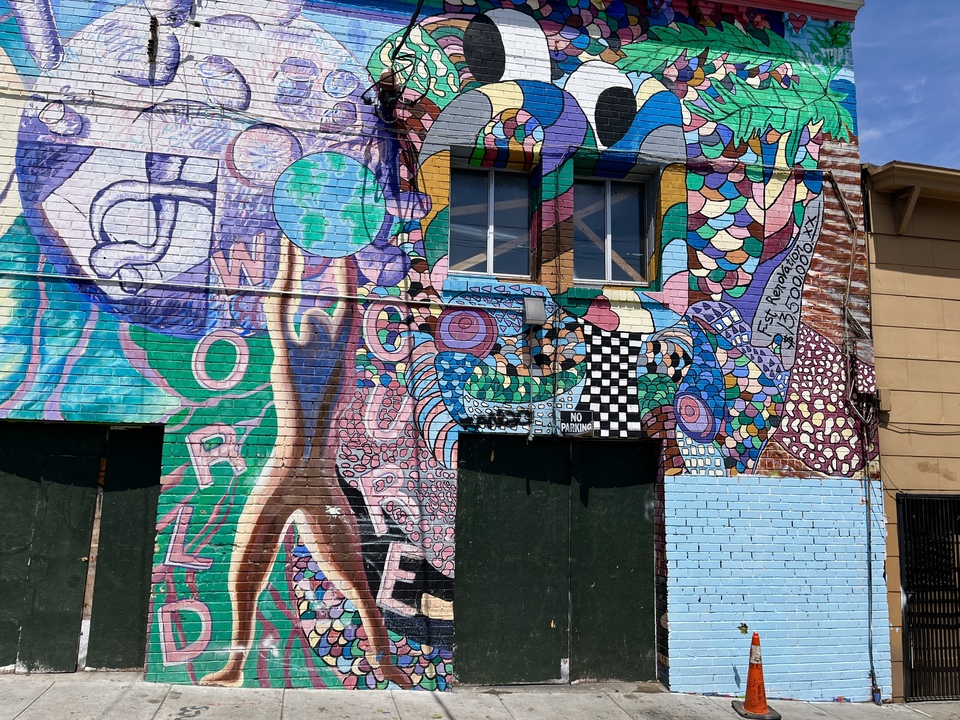 The same section of the mural was tagged by a serial vandal in 2017.

"The Hope for the World Cure mural is an invaluable historical and cultural asset to the Castro community, depicting a defining chapter in San Francisco’s LGBTQ history," Mandelman told Hoodline. "I am disappointed to see the mural vandalized and partially obscured by a derelict trash enclosure, and am working with Precita Eyes Founding Director Susan Cervantes to restore it to its original, unobstructed glory."

"I am encouraged by the promising start this fundraising campaign has gotten off to, and look forward to the restoration process beginning as soon as possible,” added Mandelman. 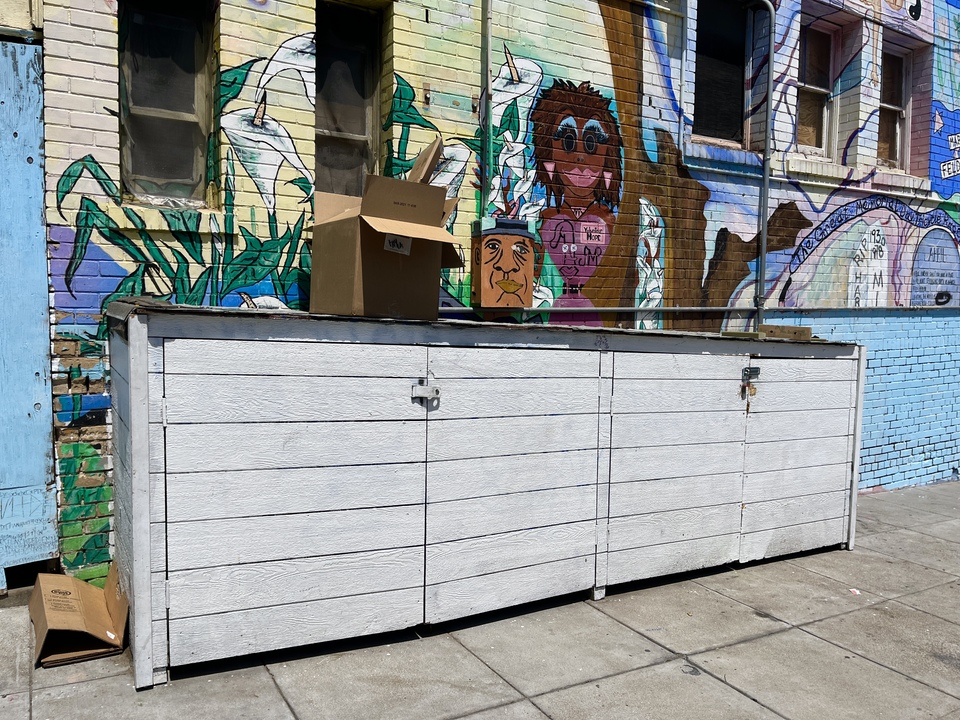 A trash enclosure along the back wall will be removed. | Photo: Steven Bracco/Hoodline

Neighbors in the area have also pushed for the mural's restoration. "I appreciate the effort Supervisor Mandelman’s office made to find a path forward for restoring this important piece of history," said Castro resident Ryan Powell. "While I think the City needs to do more to address the street conditions around the mural, we should celebrate the wins when they happen."

Restoration will include a strong conservation quality varnish to protect the mural from UV light and pollutants and a graffiti shield that should last decades. Mandelman's office is also working with the Department of Public Works on revoking the minor encroachment permit for the trash enclosure along the back wall of the building.

The trash enclosure covers up a portion of the mural and according to Mandelman's office, it has also facilitated a number of encampments in the area and poses a serious fire hazard. 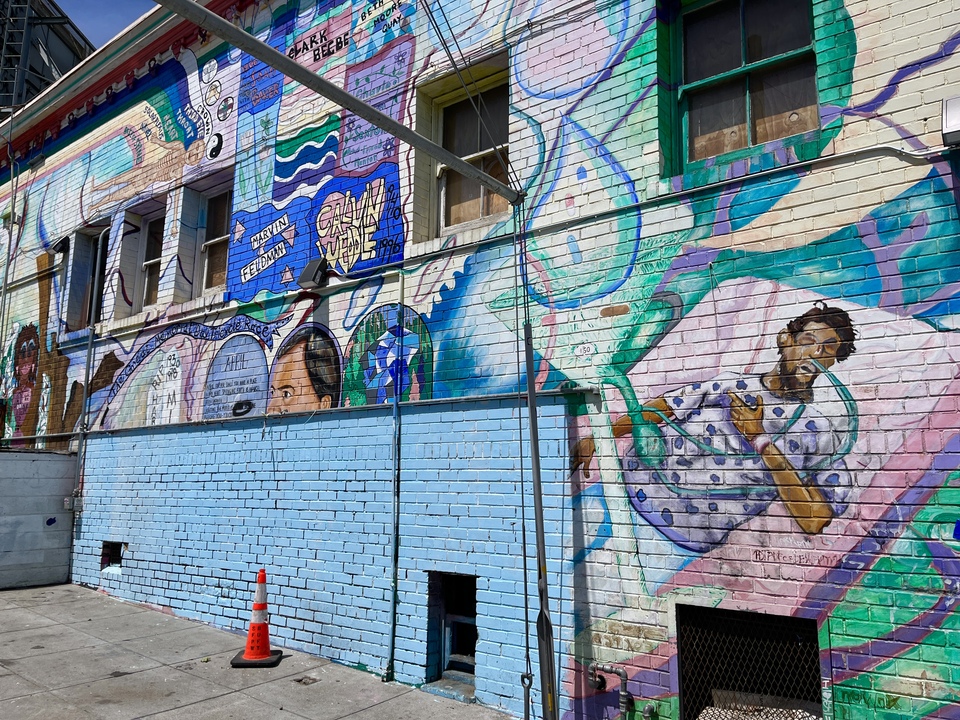 Since being vandalized, the Castro/Upper Market Community Benefit District (Castro CBD) painted over the graffiti with a light blue color at the suggestion of Cervantes.

Restoration work will first begin with carefully cleaning the mural. Once that work is complete Cervantes says they will attempt to remove the graffiti and paint. "If that's not successful, we'll prime over that and redraw that section and repaint it," said Cervantes. 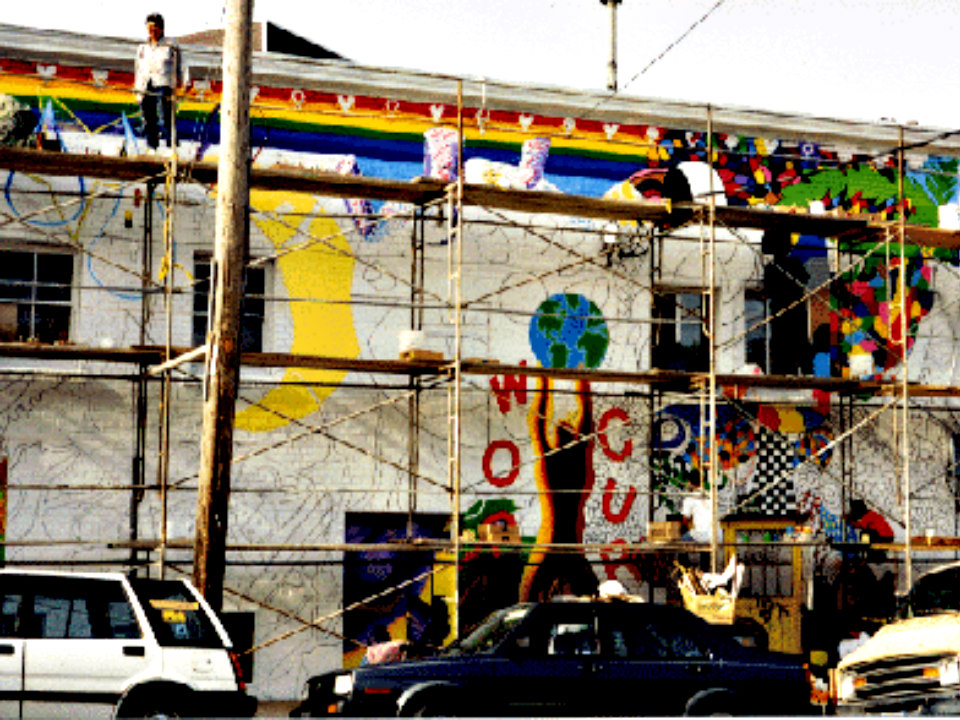 The Hope for the World Cure mural being painted in 1998. | Photo courtesy of Precita Eyes Muralists

Cervantes said the mural will be restored to look as it did back in 1998. "We're going to restore it exactly as it was before," said Cervantes. "It is a cultural legacy and an asset to the Castro."

However, Cervantes added that there may be some room for minor changes. "That will be up to the community that is going be involved in the restoration," said Cervantes. "I think there are also people who would like to add or update some things."

"It's historical and it's an iconic piece because it's the only mural that was created by artists who were affected by the AIDS crisis," Cervantes added. "It's important to preserve the artists' legacy and respect the effort that they made to share their expression about their struggle with the disease."