When the 30-year-old bathhouse and sauna Eros left it’s old home on Market Street near the Castro in December 2021, the city's only remaining gay sex club said they had a new home lined up. We learned in April that the new home was the former home of Bulldog Baths at 132 Turk Street (at Taylor Street), and that Eros co-owner Ken Rowe hoped to have the place open in time for Pride Weekend 2022. 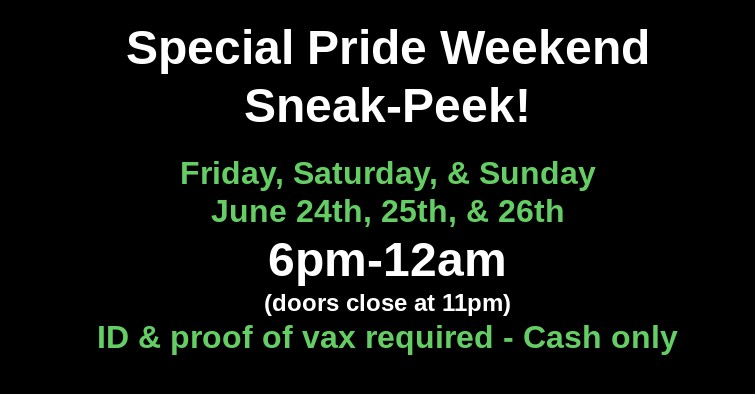 Well, it is now Pride Weekend 2022, and… would you settle for a “Special Pride Weekend Sneak-Peek” instead? According to the Eros website, the club will be open “Friday, Saturday, & Sunday, June 24th, 25th, & 26th” from 6 p.m. - 12 a.m. all three nights. The club adds that “doors close at 11pm,” so presumably, they are no longer admitting after 11 p.m., but guests can stay until midnight.

The Bay Area Reporter broke the story on Eros’ opening, and pointed out that “Rowe had been working out last-minute issues with the city's Department of Building Inspection this week in order to get the sign off that Eros could once again be in operation.”

It’s not clear whether Eros will be running regular hours going forward, or if the “Special Pride Weekend Sneak-Peek” is only for this weekend. Rowe had formerly been the sole owner of Eros, but per the Bay Area Reporter, “Rowe now shares co-ownership with Loren Bruton, who for many years has served as Eros' chief in-house artist, and Douglas Hingst.”

While Supervisor Rafael Mandeman has proposed bathhouse and ‘adult sex venue’ legislation that would allow for the locked doors of yesteryear at such clubs, that bill is still a proposal which has not yet been passed by the board of supervisors.