Photo: Jared Schwartz/Hoodline
By Jared Schwartz - Published on March 31, 2014.
San FranciscoCivic CenterHayes Valley
It's been six months since we last updated you on the status of the new Boys & Girls Club (Don Fisher Clubhouse) so let's check in to see how things are coming along.

But first, how about a quick recap?

In October 2013, we shared how the Boys & Girls Club of San Francisco (BGCSF) was breaking ground on a new clubhouse that would replace the youth center in the Upper Haight that's been serving San Francisco since 1952. The new structure, designed by TEF Architecture, was described as a 4-story, 33,500-square-foot clubhouse with a swimming pool, gymnasium, art studio, and learning center.

Last week, our fellow Hoodliners in the Upper Haight found out the old Boys & Girls Club had been purchased by a Falun Gong-related organization for $6.9 million and is planning on turning the building into "a new campus for the Fei Tian Academy of Arts California, an unaccredited fine arts academy which was founded by a group of Falun Gong members in 2010."

Okay. Back to us.

We were tipped off by Socketsite that there have been updates to the design of the clubhouse. We headed over to the TEF Architecture blog where they share a sketch of the new clubhouse with the entrance facing Fulton: 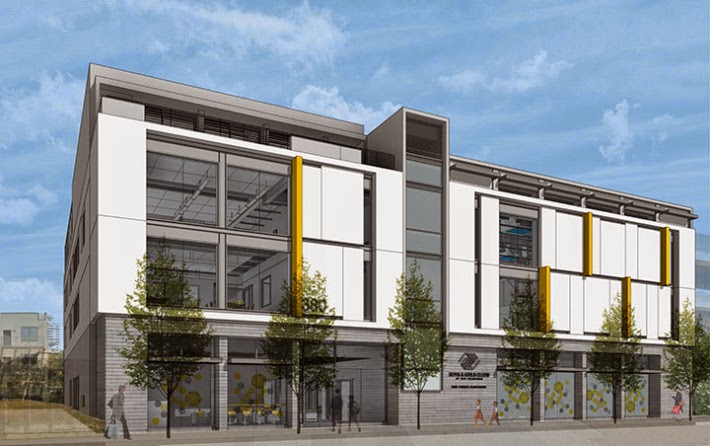 They explain how there will be housing built on the corner of Fulton and Gough as part of an agreement reached when the BGCSF purchased the land. David Baker Architects (DBA) is designing 70 studio and two-bedroom apartments on the corner and there will be a courtyard between the two buildings.

As for the clubhouse, their focus is on visibility and transparency. They write "We wanted to create a series of spaces where visibility promoted a safe environment but also showcased the variety of activities available to neighborhood kids."

In order to get that all in, they're dividing the space into two functional areas:

It made the most sense to divide the building into two main components: one for the recreation elements, the other for everything else. To maximize sightlines within the building, we inserted a glazed two-story atrium lobby between the halves of the building. The atrium brings in additional daylight and provides views to the pool, the gym, and the arts and crafts area. Above the atrium are two office floors, housing the administrative offices of BGCSF, with windows looking into the gym.

We look forward to this great addition to the community. With a (likely) $10 annual membership for kids, the Don Fisher Clubhouse is scheduled to open in early 2015.
San FranciscoCivic CenterHayes Valley
May 20, 2022