San Francisco And The Great Drought Of 2014

Image: Orin Zebest
By Nuala Sawyer - Published on August 17, 2014.
San Francisco
For months now, California's drought has been a hot topic in the news, moving from headline to below the fold and back up again. As you probably know, last year was one of the driest years on record in California, resulting in a statewide drought emergency earlier this year.
But how bad is this drought? It's certainly not the first time California has experienced a drought, and it can be hard to spot the effects day-to-day. Water still pours out of our showers, Alamo Square is still green, and lines of vehicles still snake out of the car washes.
The truth is that this drought is pretty bad. On August 14th, the US Drought Monitor reported that 82% of the state is suffering from "extreme" or "exceptional" conditions, the two worst options listed in their charts. This drought is thought to be the worst California has experienced since 1895.
Where does San Francisco's water come from?

(Image: Shannon1)
San Francisco's water supply comes from the Hetch Hetchy reservoir, tucked away in the glacial mountains of Yosemite. It's the primary source of water for 2.6 million Bay Area residents, and is operated by the San Francisco Public Utilities Commission (SFPUC). San Francisco is one of only six U.S. cities not required to filter its tap water due to the high quality and cleanliness of its source.
Hetch Hetchy is currently operating at a mere 64.5% of its maximum capacity.  In addition, a whopping 4% of the water piped from Hetch Hetchy to San Francisco is lost through faulty infrastructure. Badly maintained pipes well over a hundred years old have not held up to time and heavy use, causing 3 million gallons of water a day to be lost (this falls within accepted industry standards).
How is our water used?
According to SFPUC, on average each San Franciscan uses 88 gross gallons of water per capita per day (gpcd), which is less than half of the state's average of 197.  That's the total amount that each of us uses just by living in San Francisco. From a residential perspective, each of us averages 49 gpcds per day at home. That includes showering, flushing toilets, making coffee, and watering our gardens—anything that would show up on our water bill.
Before we pat ourselves on the back for falling well below state average, let's look at what other areas are doing to preserve water.
State mandates and legislation
“We can’t make it rain, but we can be much better prepared for the terrible consequences that California’s drought now threatens.” said Governor Brown as he declared a drought stage of emergency earlier this year. “I’m calling all Californians to conserve water in every way possible.” For some areas this has resulted in polite suggestions, for others strict water restrictions that can result in fines, and for San Francisco, there's this provocative conservation campaign. The Association of California Water Agencies has an excellent updated map on California's cities and what they're doing to save on water.
One water conservation overachiever in California is Sacramento. Our state's capitol has entered a Stage 2 Water Contingency Plan, limiting residents who water their lawns or wash their cars. Each resident is allowed only two days a week to do those activities. The city has encouraged vigilantism amongst neighbors, and people are told to call 311 and report water violations. Water conservation fines are doubled during Stage 2, meaning that one can be charged up to $500 for a violation. In a report tracking California's city water usages from 2011-2013, Sacramento topped the charts with water cuts. 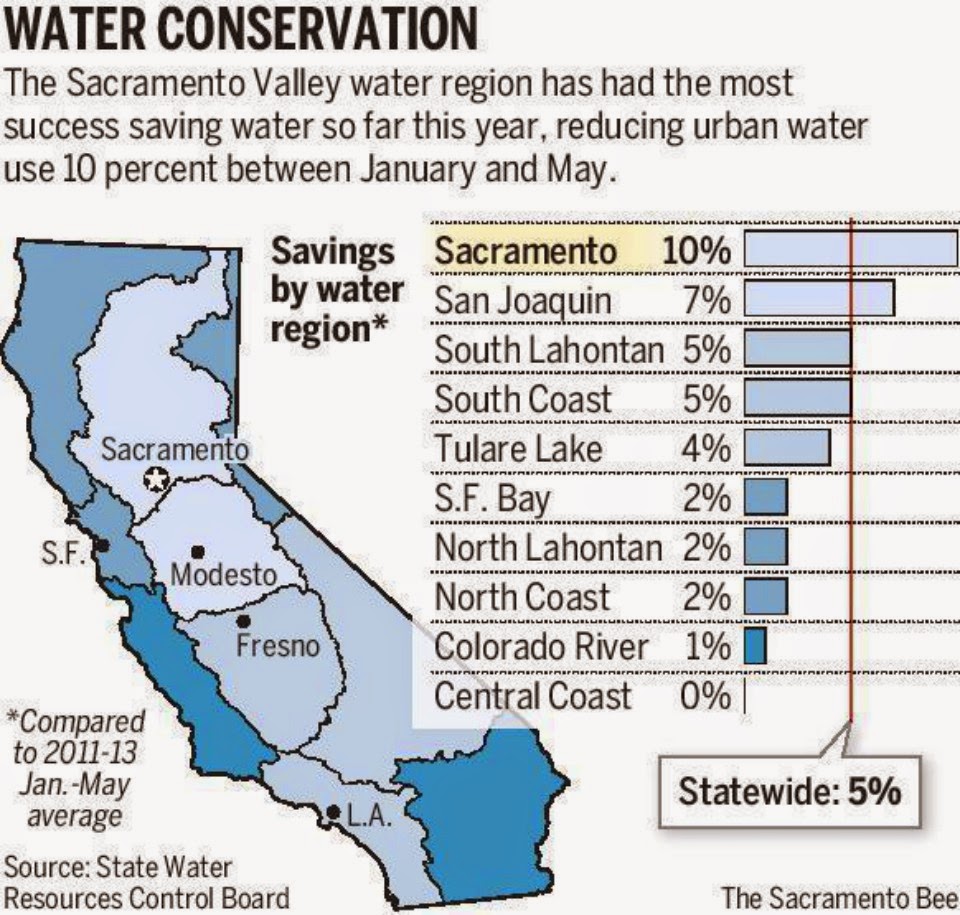 (Image: The Sacramento Bee)
As for San Francisco, we scored quite low on the list. The truth is that while the drought is certainly on the mind of local government and residents, very little has actually been done to preserve water in our city.
Last week, SFPUC proposed that larger water consumers in San Francisco—such as schools, golf courses or condos—cut outdoor water usage by 10% or face penalties. However, since most water meters don't distinguish between indoor and outdoor water usage, this would be a tricky move to enforce. Those who might be identified as using too much water would first be handed a warning, and then fined $100 upon future violations.
SF Rec and Parks lists several water reduction practices that have been put into play, including turning off recreational water features that don't have a recirculation system, reducing the running time of fountains, and refraining from washing equipment.  There is no mention, however, of reducing the watering of city parks, a question which many Hoodline readers have asked us in the past few months.
As for the future of California water conservation, the ball is in voters' courts come November. A $7.5 billion bond is on the docket to fund water conservation efforts throughout the state. This money will be split between watershed restoration, water recycling, and clean groundwater projects, giving the state's water infrastructure a much-needed boost to handle future droughts and water shortages.
In the meantime, we can rely on a Twitter account created by The Southern California Water Committee to keep us up to date on water saving measures. Meet Lawn Dude.
Saving water at home
Aside from voting in November and keeping abreast of the statewide legislation, we can also make a difference by saving water at home. Although this has been encouraged by media and local government for a while, there has been very little in the way of education on how to lower one's day-to-day water usage. In this SFPUC report asking for a voluntary 10% water use reduction, there are no tips on how to actually achieve this. Here's a few we gathered:
For more tips on conserving water, visit this site.
And with that, we leave it to you. Where would you like to see water conservation methods put into play around San Francisco?  Who should hold the most responsibility—the state, the city, or individuals? And what are your tricks for saving water?
San Francisco
Sep 30, 2022