The top of Nob Hill is a site to behold, visited by tourists from all over the world. Collis P. Huntington Park offers a front row seat to old world splendor, flanked by Grace Cathedral, the Scarlet Huntington Hotel and the Flood Mansion. 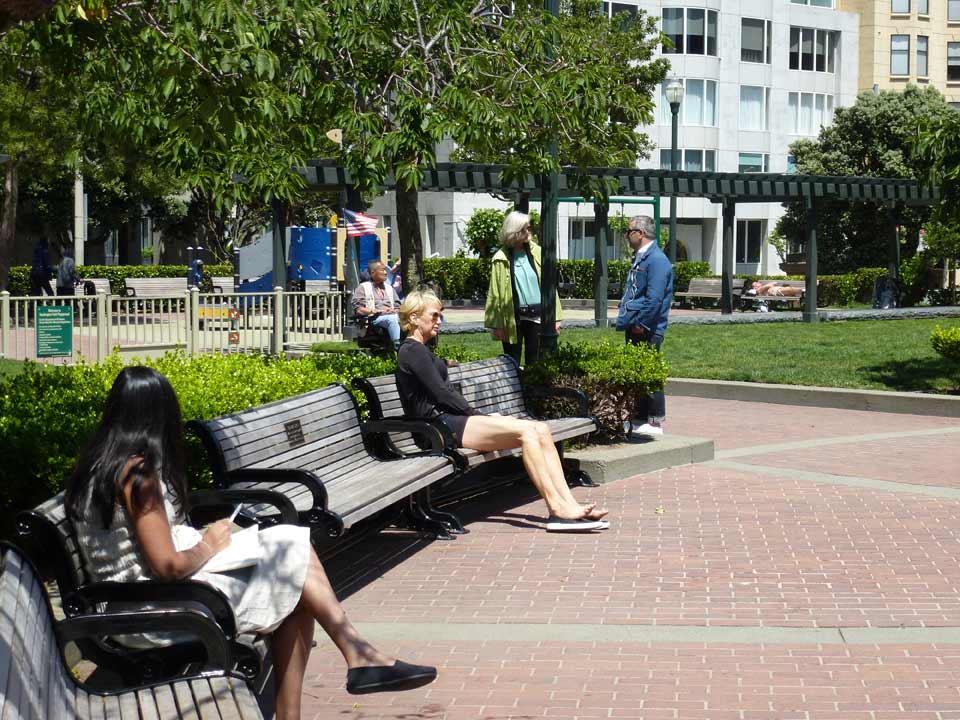 Huntington Park is designed as a formal rectangular space with entrances on all four sides that connect to a central circular plaza and fountain. Low hedges and trees border the park’s edges and line the brick walkways that bisect the park. Neighborhood residents and tourists alike enjoy spending time in this public space. 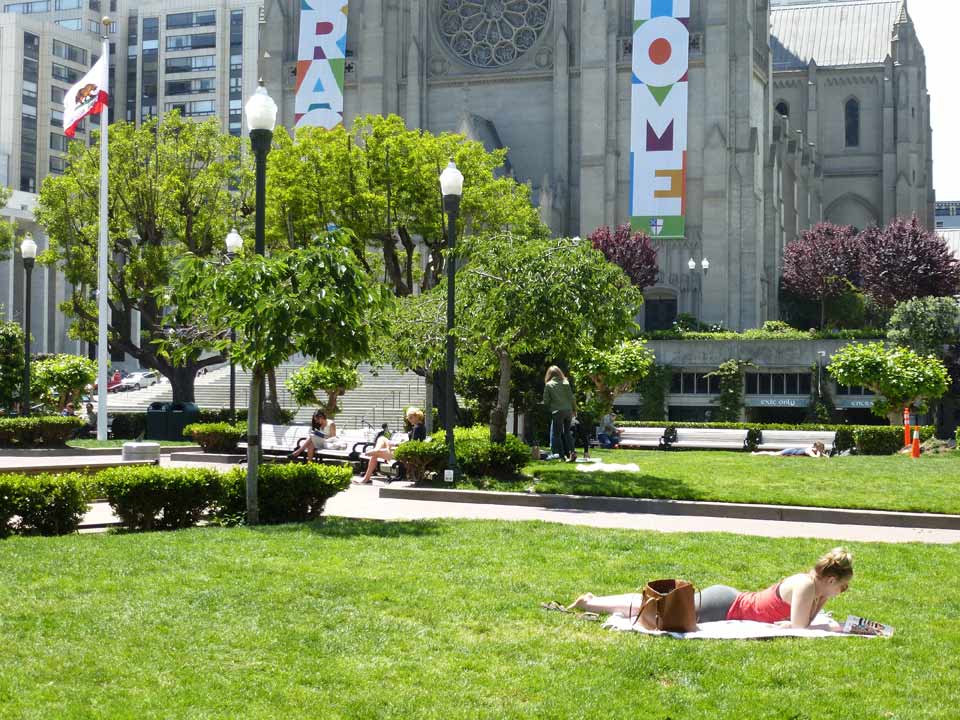 Grace Cathedral flanks the west side of the park

Grass lawns and flowering plants, such as hollyhocks, lavender, roses, lilies, yarrow and other flora, soften the edges. A playground is in the northern part of the park, separated by a low fence. Benches invite visitors to linger and relax to the sound of the gurgling fountain and cable car bells ringing in the distance. 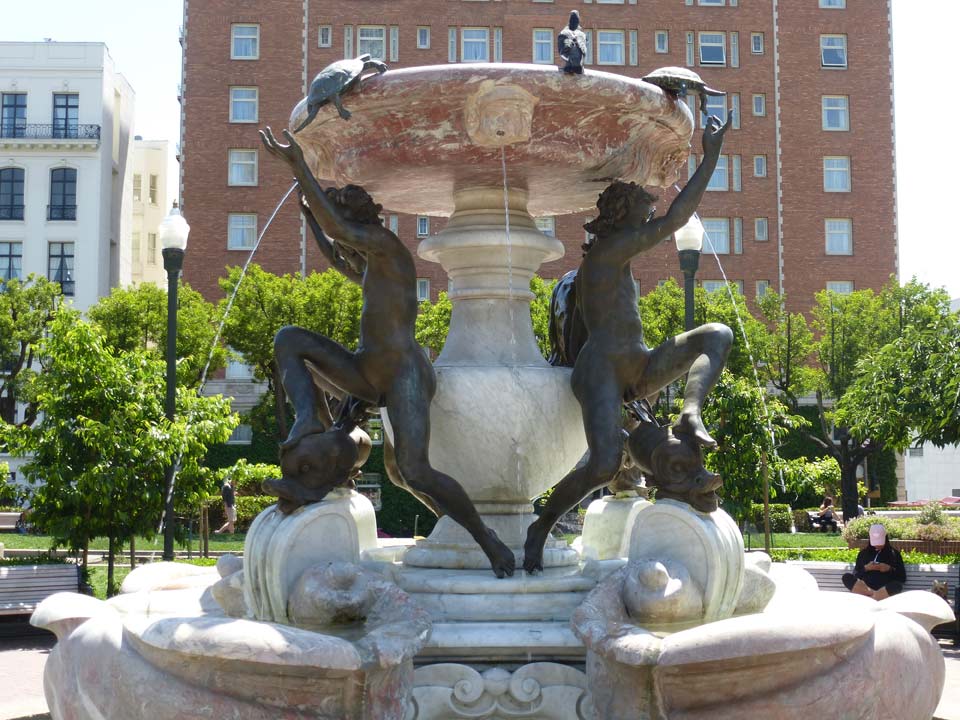 The "Fountain of the Turtles" in Huntington Park

The centerpiece of the park is the “Fountain of the Turtles,” a replica of Rome’s Fontana delle Tartarughe, designed by architect Giacomo della Porta and sculptor Taddeo Landini in the 1580s. The original is located in Piazza Mattei in Rome. This replica was made in the early 1900s and purchased by the Crocker family for their Hillsborough estate. When the estate was sold, the fountain was given to San Francisco as a gift from the Crocker heirs and relocated to Huntington Park in 1955. The Crocker mansion on Nob Hill, destroyed in the 1906 earthquake and fire, was located across the street from the park where Grace Cathedral now stands. 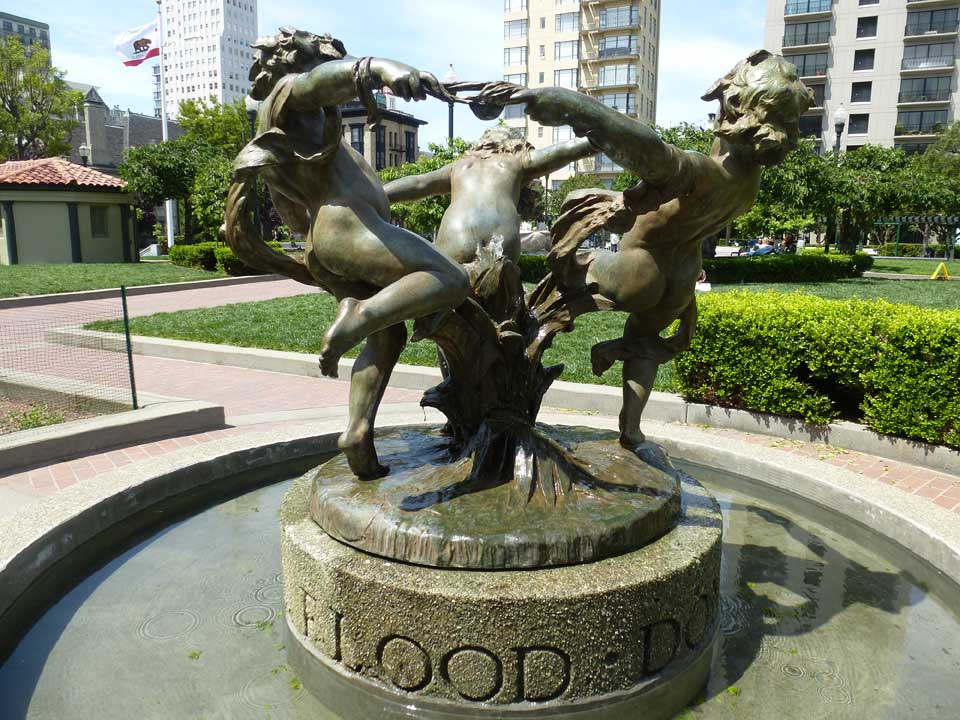 Another gift ennobles the park near the Flood  mansion. A bronze statue “The Dancing Sprites,” by French sculptor Henri Léon Greber, was donated to the city by Mrs. James Flood in 1942. It depicts a group of three children dancing and holding hands in a circle. James C. Flood made his fortune through one of the richest silver strikes in the United States, the Nevada Comstock Lode. He built his brownstone mansion on Nob Hill in 1886 and it survived the 1906 earthquake and fire, and now houses the Pacific Union Club, a private gentleman’s club. 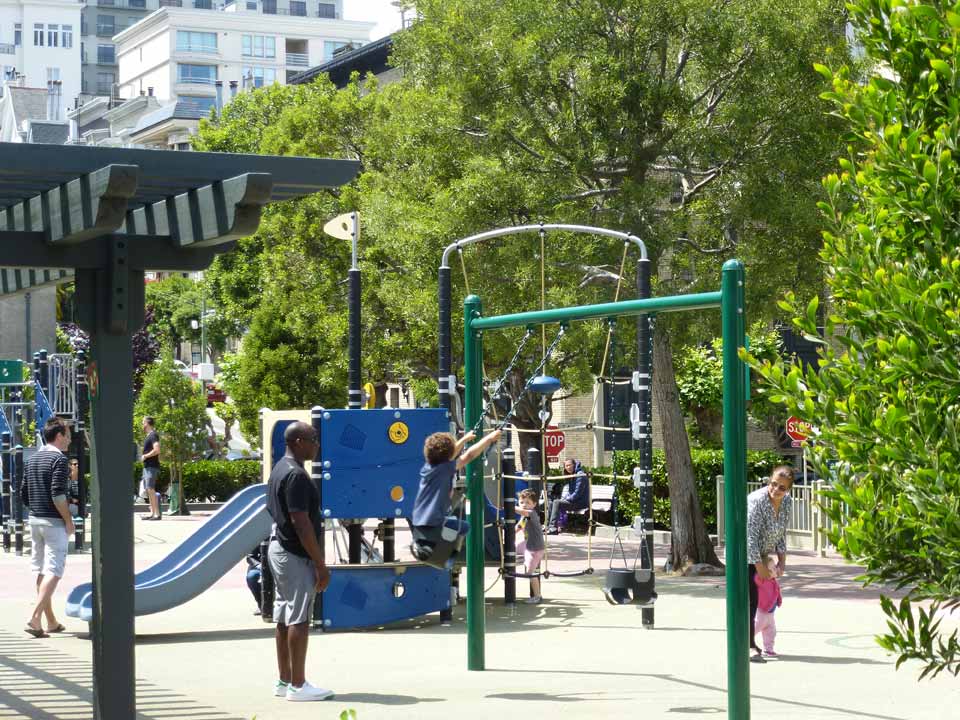 A children’s play area is located on the northern end of the park. Modern playground structures were recently installed with a mix of equipment for younger children, ages 2-5 years on the eastern side, and older children, ages 5-12 years on the western side. The upgrades were financed through the Nob Hill Association and their philanthropic arm, the Nob Hill Foundation. Both organizations have a long history of collaborating with the Recreation and Park Department on Huntington Park improvements, such as fountain maintenance, tree work and volunteer activities.

Originally known as Fern Hill, and later California Hill, the 376-foot-high Nob Hill we know today owes its extravagance and splendor to the invention of the cable car in San Francisco in 1873. Before then, the hill was a windswept expanse of sand, insurmountable by horse-drawn carriages. Once the cable car tracks were in place, a mansion-building frenzy by San Francisco’s elite began in earnest. 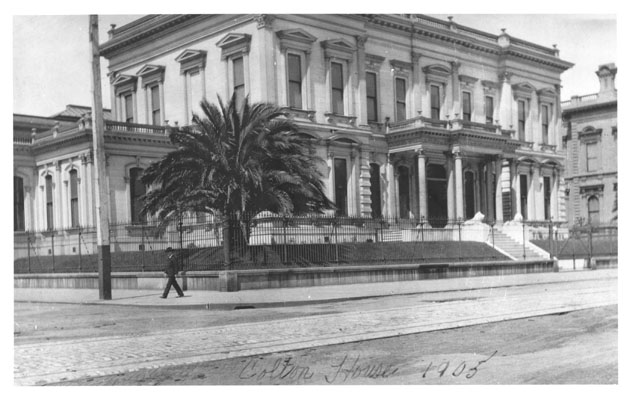 The Huntington mansion at California and Taylor in 1905, the future site of the park. (Photo courtesy of San Francisco Public Library History Center.)

Collis Potter Huntington, one of the so-called Big Four railroad tycoons, made his millions through the construction of the transcontinental railroad and played a significant role in San Francisco’s history and early development. In 1892, Huntington bought the mansion originally built by David D. Colton in 1872 that stood at the corner of Taylor and California, where Huntington Park is now. The mansion featured an entry flight of marble steps leading to a great portico of Corinthian columns and crouched lions. 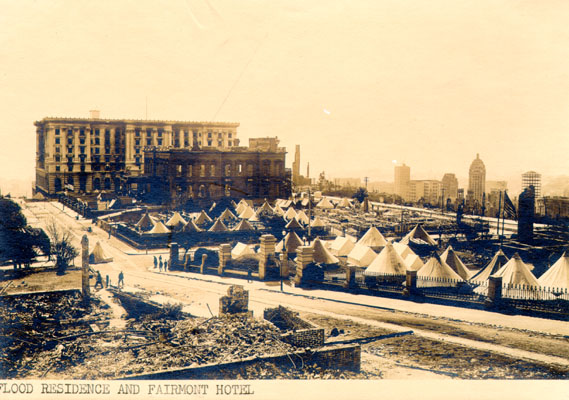 Flood residence and Fairmont Hotel on Nob Hill, 1906. Refugee camps are set up on the ruins of the Huntington and Crocker properties, where Huntington Park and Grace Cathedral are today. (Photo courtesy of San Francisco Public Library History Center.)

It was a wood-frame palace with Neo-Classical ornamentation, and like most of the other ostentatious homes on the hill, it was destroyed in the aftermath of the 1906 earthquake and fire. After the death of her husband and the destruction of her home, Huntington’s widow donated the property to the city in 1915 for use as a public park. The low granite wall that surrounded the house survived the fire and still borders the property today. 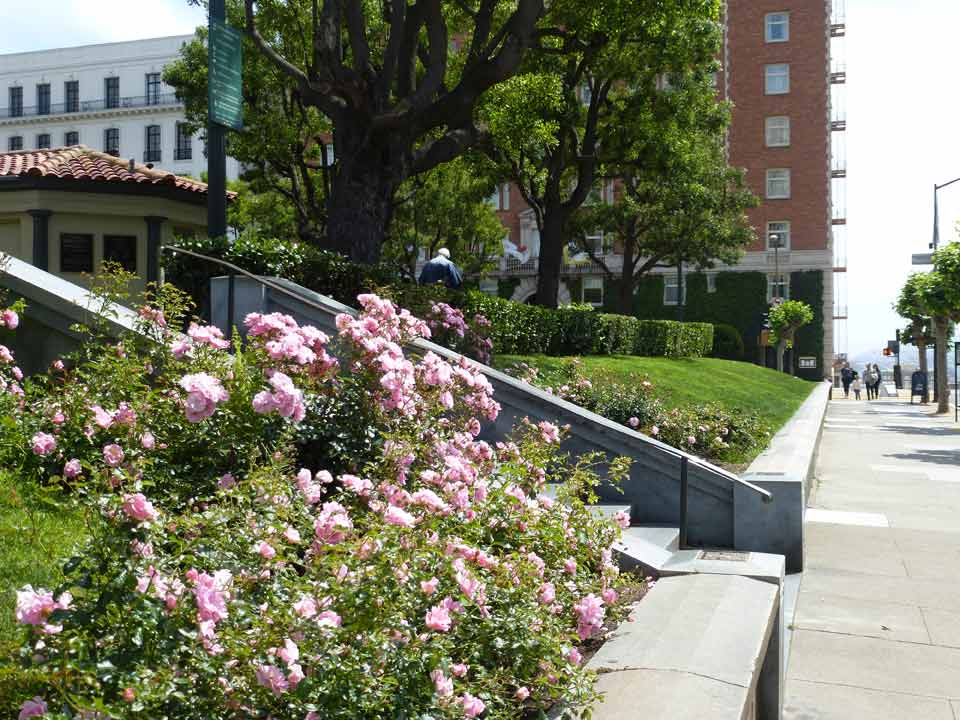 To glimpse a collection of spectacular 19th century photographs of Nob Hill extravagance, take a peek in The Big Four restaurant and bar on the first floor of the Scarlet Huntington Hotel, across the street from the park.

San FranciscoNob Hill
About 11 hours ago