The Booksmith moving in to the former Bindery space | Photo: The Booksmith
By Carrie Sisto - Published on March 02, 2021.
San FranciscoUpper Haight

After several years of planning, legacy bookstore The Booksmith is moving to its third home later this spring. The new location is just down the block on Haight Street in a building the business already leased for an event-focused space called The Bindery.

The bookstore took over the space at 1727 Haight St. — formerly Second Act Marketplace, a food hall — in 2016 as an event space, cafe, and bookstore. In 2017, The Booksmith team signed a long-term lease at 1727 Haight, always viewing it as a possible place for relocation, owner Christin Evans told us. “The question was always more about timing than anything else.”

The Booksmith intends the move to be a launch, of sorts, of the next chapter of its legacy business, now in its 45th year. Even the logo was revamped to reflect a combination of the former Bindery logo, Evans said.

The Booksmith was among the first San Francisco businesses to be granted legacy status by the city in October 2016, after being nominated by then-District 5 Supervisor (and now Mayor) London Breed. The bookstore itself launched in 1976 underneath the former I-Beam nightclub at 1746 Haight St., and has been in its most recent home at 1644 Haight St., since 1985. Evans and her husband, Praveen Madan, purchased the business in 2007, but the building remained the property of former owner Gary Frank. It’s unclear what may move into the old space at 1644 Haight. 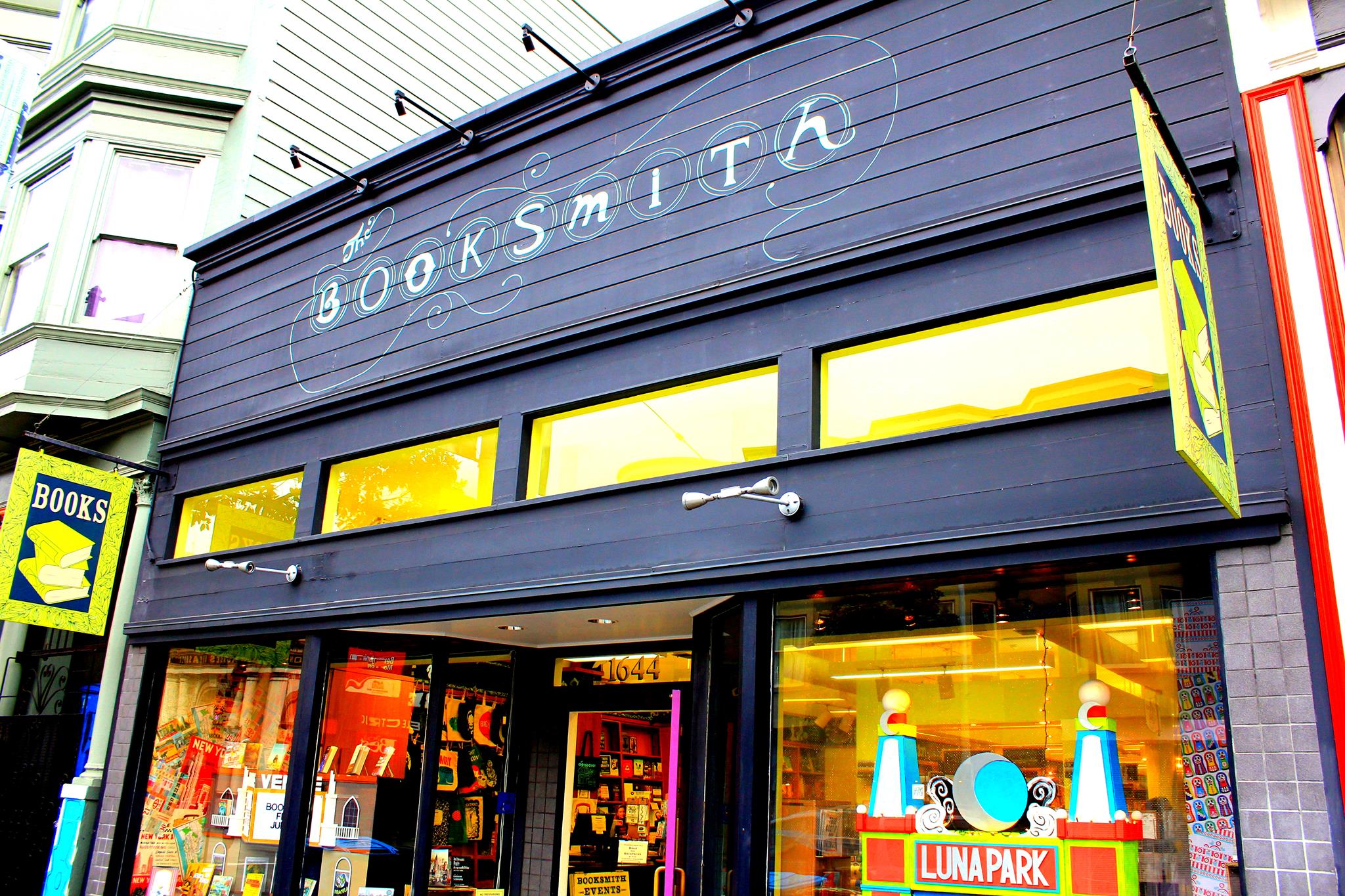 January through March are the store’s historically slowest months, and it made the most sense to pull the trigger now.

Even though it's a “very significant undertaking,” the goal is to be “set up very well as the world shifts back to normal,” Evans said. The store has always seen a huge pickup in foot traffic in the spring and summer months and Evans hopes to see a similar influx of shoppers once the new location opens in April.

While some redesigning is necessary, including relocating the shelves from Booksmith’s former location into the new space, the goal is to still accommodate literary and community events along with the more than 26,000 books already in inventory.

“It’s kind of a carefully coordinated dance between taking the books down, moving the shelves, and putting everything back together,” Evans said. 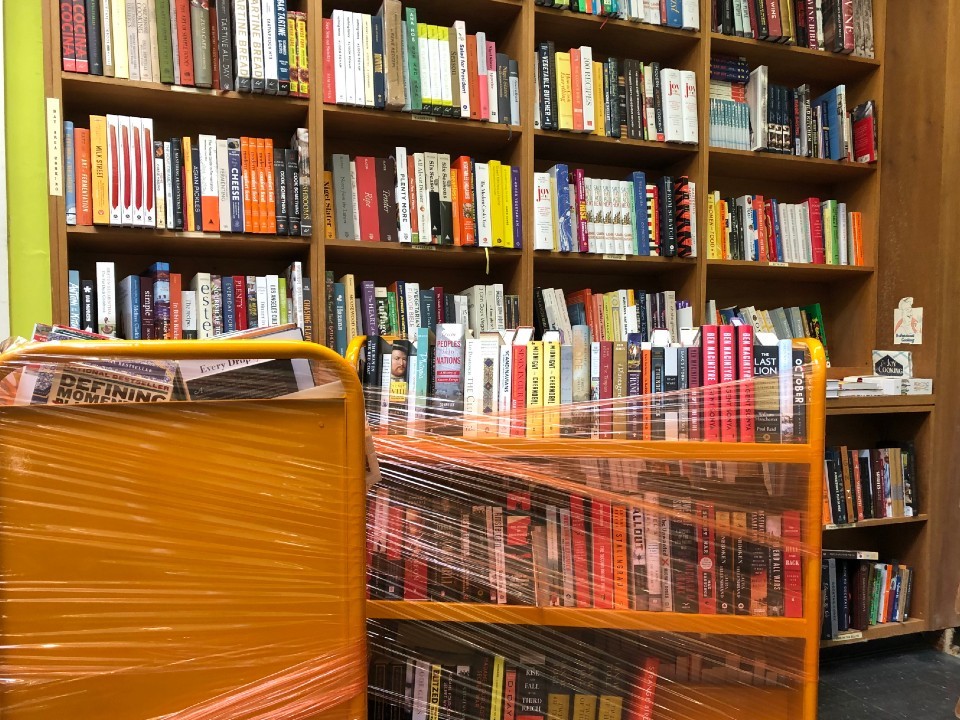 Books are being carted and rolled to the new Booksmith location at 1727 Haight St. | Photo: Camden Avery/Hoodline

All of the major renovations are done, and the next step is getting shelves on the walls, co-owner Camden Avery said. After more than 12 years on staff, Avery is taking on an ownership role and helping lead the transition to the new space.

“We didn’t resume in-store browsing yet this year because we knew the move was coming,” Avery said.

While The Booksmith was well-positioned to transition to the COVID-19-required virtual world after conducting several online events in recent years, the new space will offer in-person events once it is safe to do so, Evans said.

Although it is nearly equal square footage — both spaces are about 3,000 square feet — the new location is broken into three rooms that offer the opportunity to carve out separate nooks for different types of readers, Avery said. 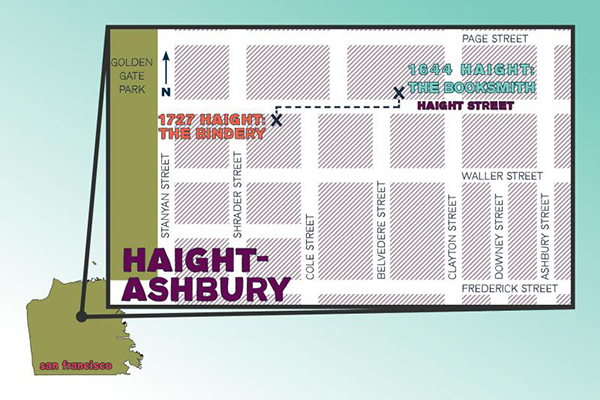 Map of the two locations via The Booksmith

All of the fixtures will still be on wheels, and the new layout, with multiple rooms, could provide opportunities to host multiple or more focused events, as well, Avery added.

“We’ve always wanted events to be hospitable, and having The Alembic right next door, with a license to offer drinks before and during the events will only enhance that hospitality,” Evans said. Some hybrid of virtual and in-person events may also occur, depending on how the bookselling industry and authors transition out of the current pandemic, she added.

The Booksmith aims to be open 11 a.m. to 7 p.m. daily soon for in-person browsing. You can keep track of the bookstore’s formal reopening by subscribing to its newsletter.